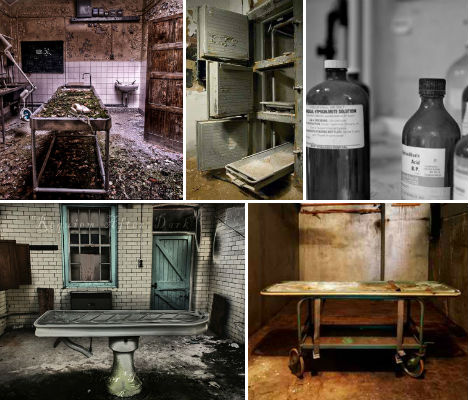 What’s creepier than an abandoned morgue? Places that have been left vacant to deteriorate and decay are already drenched in a sense of death, standing as reminders that even the inorganic things we build are not immortal. But in actual morgues and mortuaries – where autopsy tables, bone saws and embalming fluid often still litter the tables – push the macabre factor through the roof. These 14 abandoned morgues, mostly located in larger abandoned hospital complexes, will give you the chills.

Canisters of the Dead at Oregon State Hospital 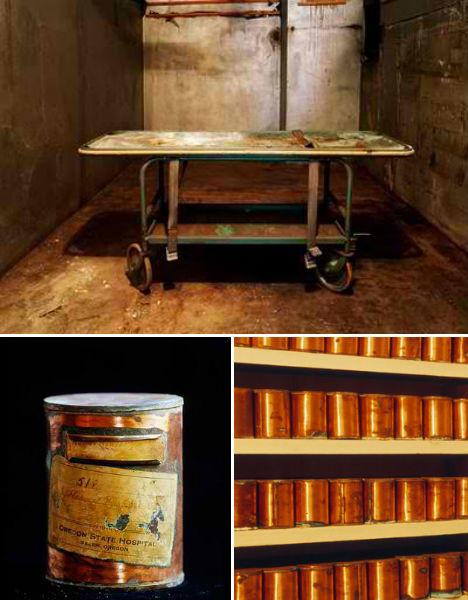 The forgotten dead sat in corroding canisters in an abandoned outbuilding of the Oregon State Hospital for decades. The crematorium, autopsy room and hallways of the building were untouched until photographer David Maisel got a look inside to photograph these copper canisters, many so corroded that they looked like someone had painted designs onto them. Each of these 3,500 canisters held the remains of a patient. Maisel photographed each one for his series “Library of Dust.” They have since been placed in orderly rows of black boxes.

Built in 1894, England’s West Middlesex Hospital was once an infirmary for a nearby workhouse and then served as a community hospital before its buildings became so rundown that they weren’t safe for use anymore. A new hospital was built nearby, and the old one is due for demolition. Like so many abandoned hospitals, its rooms still contain linens and medical records – and the mortuary still bears its rows of embalming fluid and other chemicals, as if awaiting new bodies. 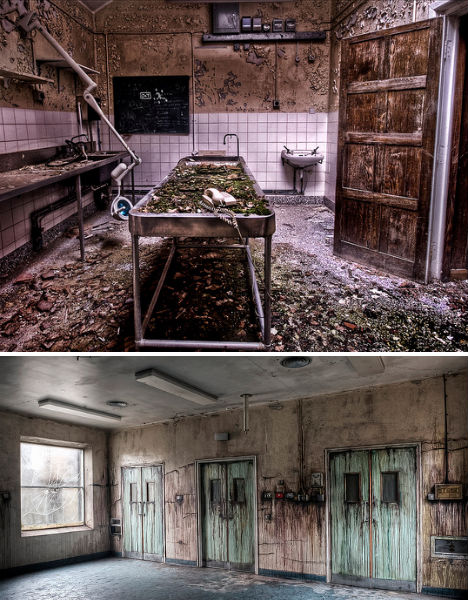 This military hospital features a reputedly mile-long corridor with its many rooms branching off to the sides, built this way in a bid to reduce cross-infection. The hospital has cared for injured troops through every major war England has seen since it was built in 1879, including World Wars I and II. Its morgue may be one of the creepiest in the world, rife with an amazing amount of decay, an old telephone sitting on the stainless steel table. 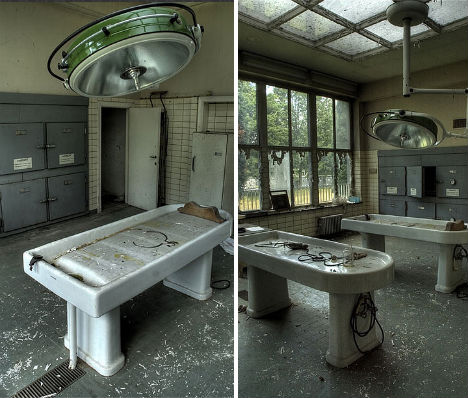 These photos captured the Mortuarium Schoonselhof in Belgium before it was demolished in 2007. Used for autopsies, the facility had a 12-cadaver freezer and two tables. Its tools and chemicals were also left behind, including electric bone saws. 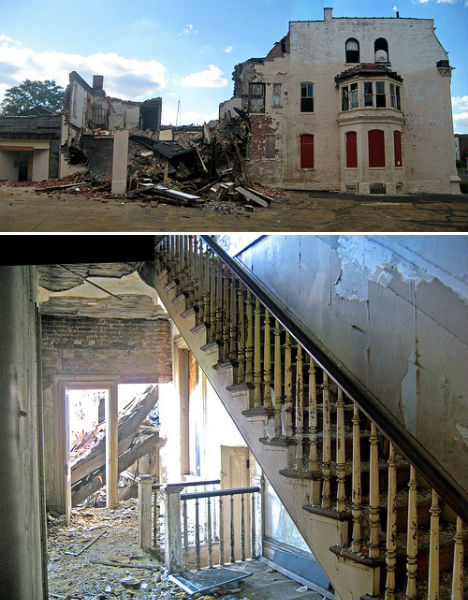 Funeral homes can be just as creepy as cold and clinical morgues – especially when they’re literally crumbling ruins. The blog Vanishing STL chronicles two separate funeral homes that began as high Victorian mansions on St. Louis Avenue’s ‘Millionaires Row’, one lovingly maintained and the other left to decay. According to the blog, brick thieves have been taking the place apart piece by piece for years, destroying a huge portion of the mansion. 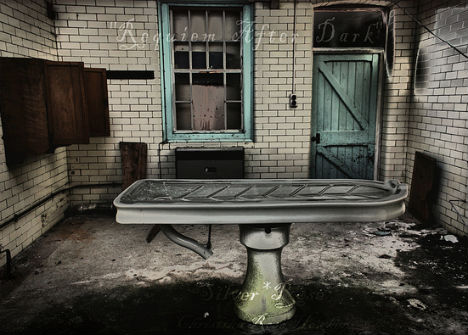 Formerly known as the Gateshead Borough Asylum, St. Mary’s Hospital was built in 1914 in Stannington, Northumberland. It was finally closed in 1995, and according to urban explorers, many of the buildings are still in good condition and could possibly be preserved, but some are falling victim to neglect. Says photographer Christina Rose Howker, “This was the last time I saw this room with all it’s inside walls on the inside. Last I saw, the three front walls had been demolished, leaving the white tiles on the back wall exposed to world and the light of day. There was no sign of the once pristine mortuary slab.” 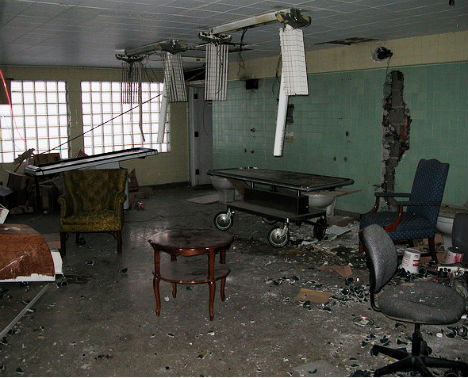 Dark and dreary, this corpse prep room at an abandoned funeral home in south Minneapolis definitely has a creepy feel to it. The combination of the room’s history, the morgue equipment and the debris that litters the floor elicits visions that could come straight out of a horror movie. 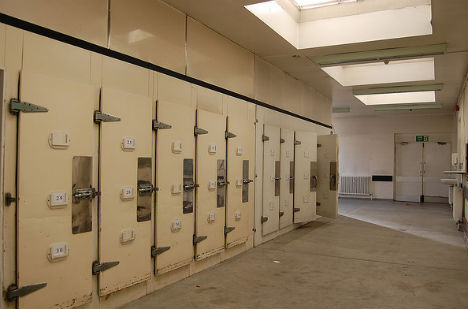 There’s no denying it – morgue fridges are extremely unpleasant. This one, at Harold Wood Hospital in Essex, England, looks like it could still be in service. Maybe that’s because it was only just abandoned in 2006, after 122 years of use. 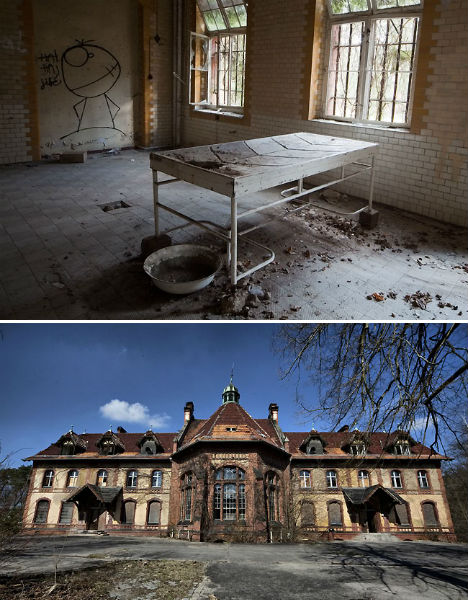 This may just be the most beautiful abandoned hospital in the world. Urban explorers travel from all over Europe to see and photograph the Beelitz-Heilstäten outside Berlin. Built in 1898 as a tuberculosis sanatorium, it was turned into a military hospital at the beginning of World War I. Adolf Hitler himself was treated for injuries here, an experience he wrote about in Mein Kampf. The hospital was occupied by Soviet forces between World War II and 1995, and by the turn of the 21st century it was abandoned altogether. 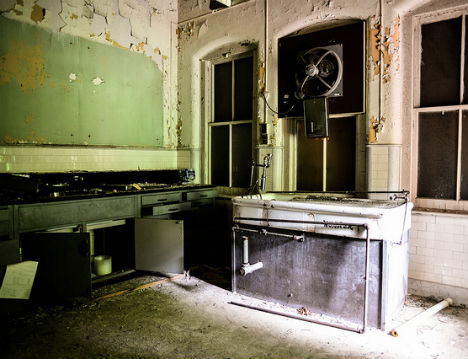 Once known as the Hudson River State Hospital for the Insane, this New York state psychiatric hospital features a beautiful High Victorian Gothic-style building known as Kirkbride that represents the first time this architectural style was used for an institutional building in the United States. The whole hospital has been abandoned since 2003, and one ward was seriously damaged in 2007 after lightning set it on fire. The morgue is actually in a separate building, on the northeast corner of the property. 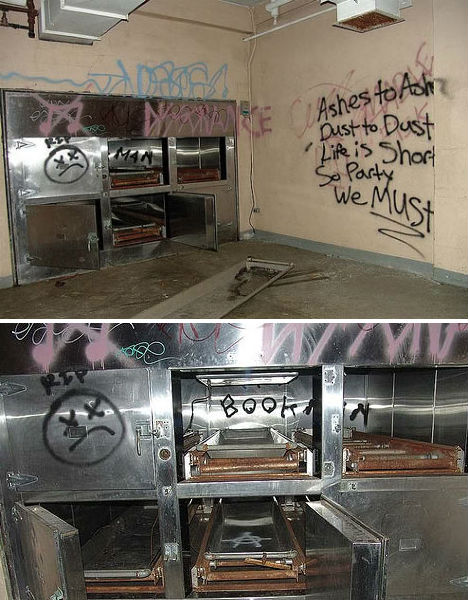 Photographer Tristan Savatier captured these and many more images of the Public Health Service Hospital in the Presidio district of San Francisco. The hospital was built in 1931 and closed in 1981; it’s been abandoned since 1988. San Francisco-based art website Fecal Face says, “In the eastern part of the basement, the morgue still has its freezer with six big drawers for the dead bodies, and the greenish autopsy room next door. Many rusted machines, pumps, pipes and tanks are still there.” 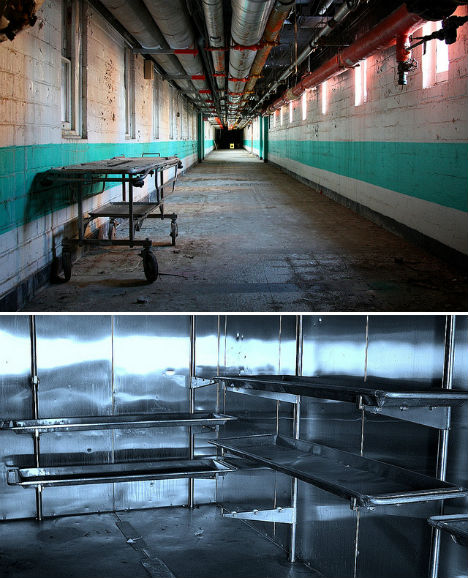 The identifying information about this particular public hospital has been removed, possibly to protect the site from vandalism. Urban photographer ‘Laserbeak’ says the hospital was established in 1806 and was closed in 2001; he was able to photograph the morgue while demolition was taking place on other areas of the hospital. Other buildings on the site are still active including an STD clinic, drug treatment clinic and a medium-security jail. 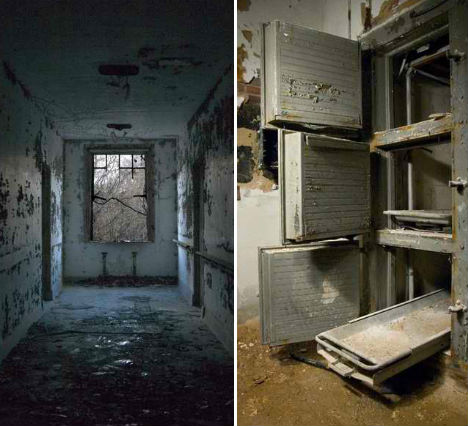 Originally built as a tuberculosis sanatorium, the Glenn Dale Hospital is an abandoned complex on 216 acres in Maryland’s Prince Georges County. Many of the separate, crumbling buildings are connected by underground tunnels. Local legend has it that the buildings were once used to house the criminally insane, who were released into the streets when the hospital closed – and then made their way back to the abandoned structures, with nowhere else to go. 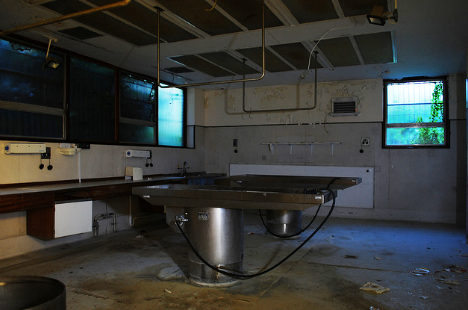 With water-stained floors and identical steel morgue tables, St. Peter’s in Surrey, England is definitely creepy. It was built to serve the casualties of World War II, but the mortuary was eventually found to be too small to handle the influx of the dead, so it was shut down in 2009. See more photos at Derelict Places.