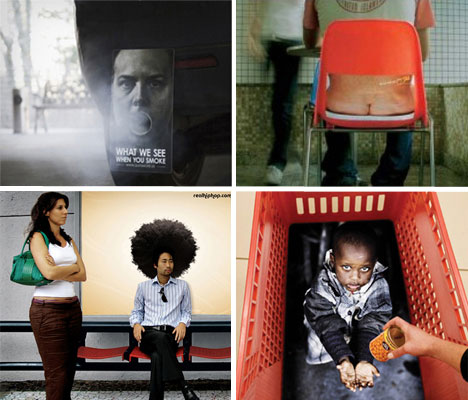 Guerrilla marketing has perfected the technique of catching people’s eyes and grabbing their attention, targeting consumers in unexpected ways and unconventional places. That, of course, is the point of this once-fringe form of advertising, which has now been taken up even by large corporations like Adidas and Microsoft. These 10 posters show just how powerful guerrilla marketing can be, whether trying to solicit donations for charitable causes or provoking you to join a gym. 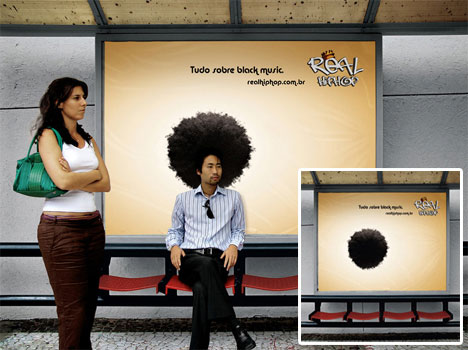 A floating afro sits at head-level behind a bus stop seat, just at the right height to make it look like anyone who sits there has quite an impressive head of hair. This poster by ‘Real Hip Hop’ is definitely an eye-catcher. 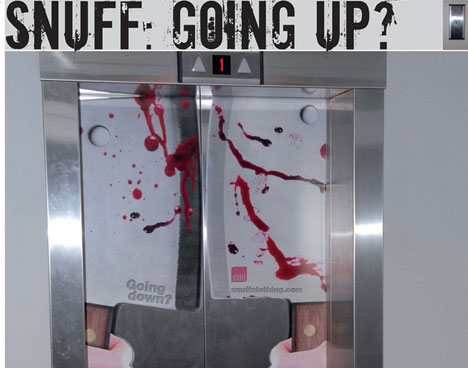 (images via: Ads of the World)

What do bloody cleavers have to do with skiing? That’s anybody’s guess – apparently Snuff, a clothing brand for ‘hard core’ skiers, was just trying to get people’s attention. The campaign was based around the idea that “death is only a matter of time”. Alrighty then, let’s go skiing! 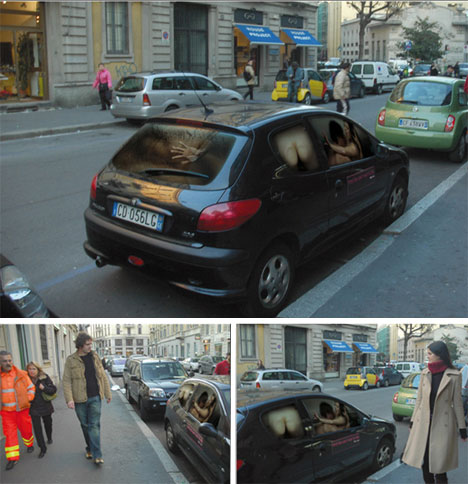 It doesn’t get much more in-your-face than this. An Italian sex shop called ‘Erotika’ covered all of the windows of a car with stickers showing people in rather suggestive poses. The car, situated right outside the door of the shop, featured another sticker that said “Toys you can’t wait to use”. 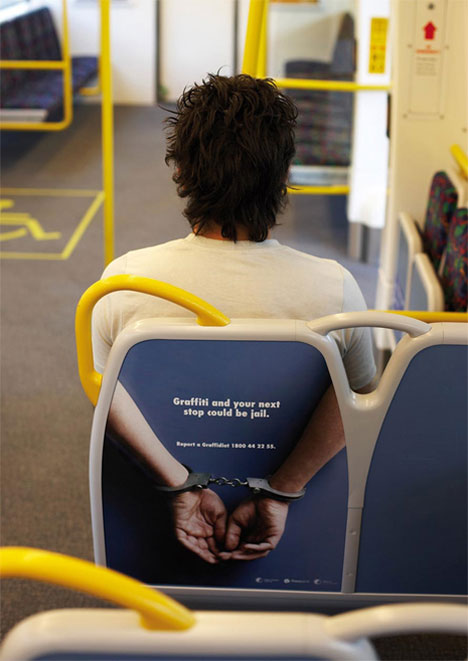 The Australian Public Transport Authority got tired of people spray-painting graffiti on their buses and trains, so they targeted the ‘graffidiots’ with this ad campaign that reminds would-be vandals what the consequences of their actions could be. 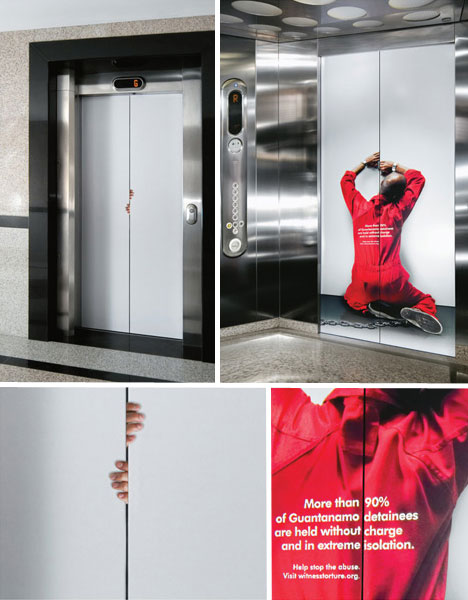 An otherwise blank set of elevator doors features two sets of fingers peeking out from the seam, as if someone inside is trying to escape. Once you’re inside the elevator you see the owner of those fingers: a man in a prison jumpsuit and leg-cuffs. Witness Against Torture, a human rights group, used this ad to campaign for the closure of the Guantanamo Bay detention center.

Get Up and Run Chair Posters 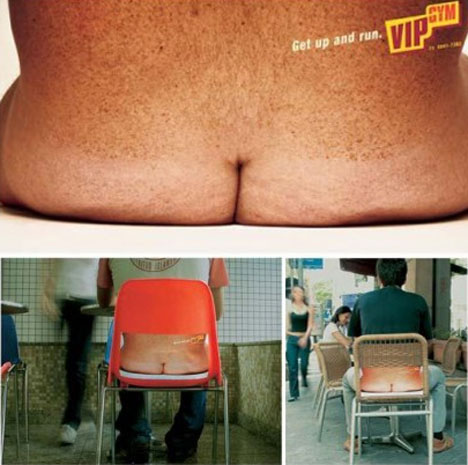 VIP Gym thought images of a flabby, cellulite-ridden butt topped with a pair of love handles would be enough to make people want to ‘get up and run’. Glued to chairs in restaurants and cafes, the poster gives you the uncomfortable feeling that you’re seeing way more of strangers than you would have liked. 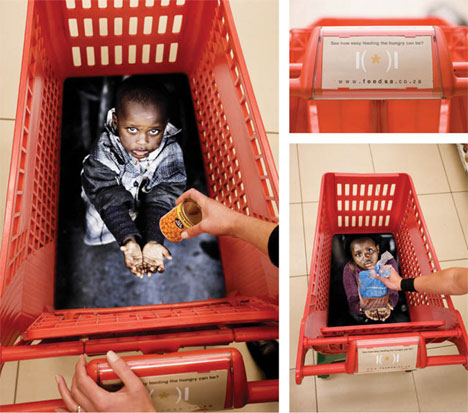 (image via: I Believe in Advertising)

You’d have to have a heart of stone to avoid being affected by the images of poor, starving children sitting in the bottom of your shopping cart. Any food placed in the shopping cart appear to be delivered right into the needy child’s hands. Feed SA, a South African charity dedicated to feeding disadvantaged people, put these decals in shopping carts and saw a marked increase in donations and a significant boost in website traffic. 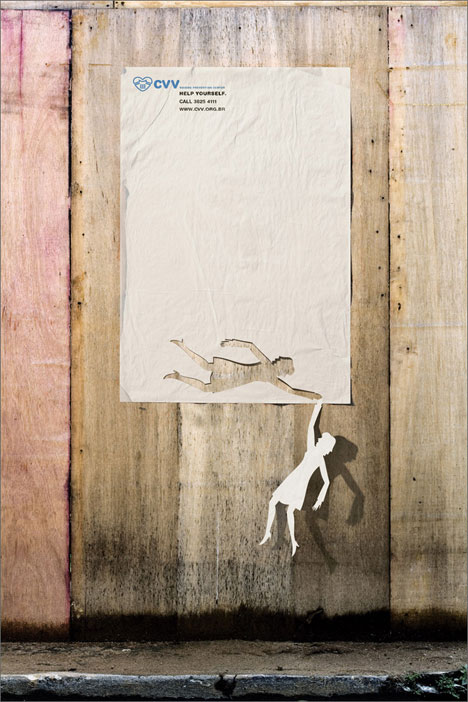 So simple, yet so effective. These posters by a Brazilian suicide prevention organization use nothing but white paper and the silhouette cut-out of someone falling – with the negative space from the cutout appearing to save them. 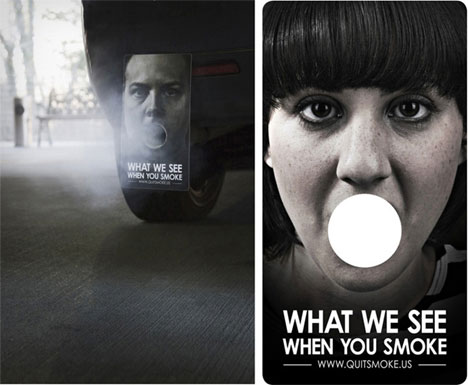 Tailpipe smoke is gross… and the same goes for the carcinogen-loaded clouds that erupt from the mouth of a cigarette smoker. An anti-smoking group equated the two by placing posters of people’s faces with the cut-out mouths strategically placed at the end of tailpipes. 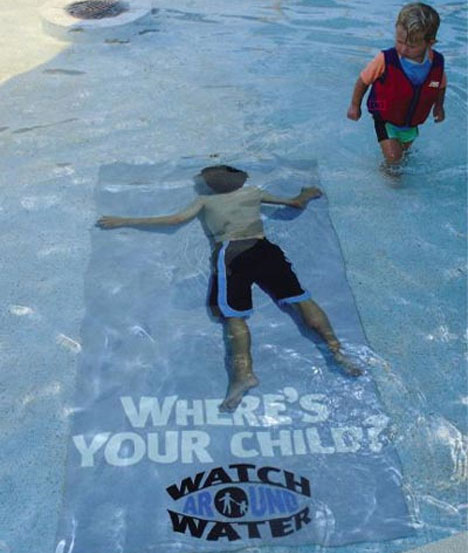 This poster featuring a motionless child hovering at the bottom of a pool – placed underwater so that from above, it looks real – is part of a drowning awareness campaign by ‘Watch Around Water’, an Australian safety initiative. Parents who caught a glimpse of this rather grisly warning no doubt held their children a little tighter, so perhaps in this case disturbing equals effective.