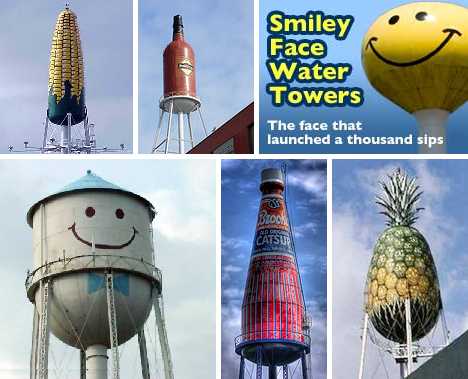 Water towers aren’t designed to showcase art but they sure do tend to attract it! These 10 wet, wild & wacky water towers advertise civic pride, celebrate local industries, and in the process do double duty storing millions of gallons of cool, clear water… and for that, we say tanks. 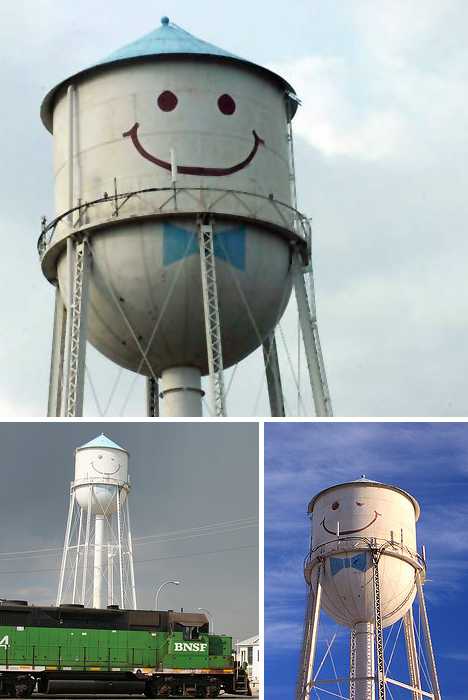 (images via: Sketched Out TV, GFPeck and Eric E Johnson)

Smiley-face water towers can be found in any number of American towns from coast to coast, and why not? Their message is positive and apolitical; their design is simple and their cost is cheap. The Smiley Face Water Tower in Grand Forks, North Dakota, one of the nation’s most famous smiling water towers, sadly grins no more. Built in 1932 in the depths of the Great Depression, the tower’s easygoing grin, saucy wink and smart baby blue cap & bow tie added a drop of good cheer – coming and going – to countless thousands of citizens and travelers. 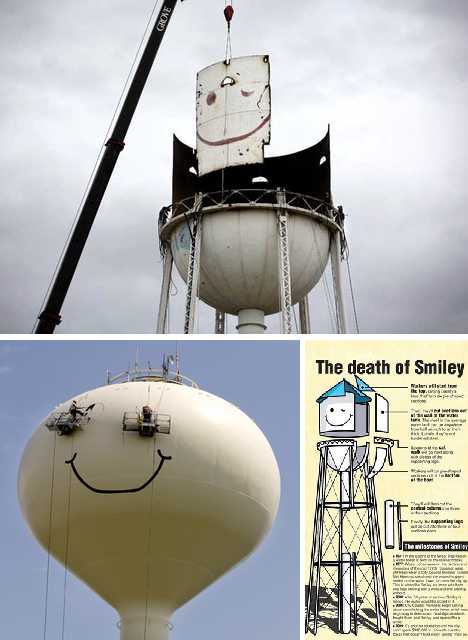 All good things must come to an end, and on October 7th, 2009, after 77 long years, the end finally came for Grand Forks’ Smiley Face Water Tower. Its bulbous, lead-free painted replacement just a few blocks away also sports a smile (though not a bow tie) and can hold much more water in the bargain. Somehow, though, it’s just not the same. It doesn’t even wink. 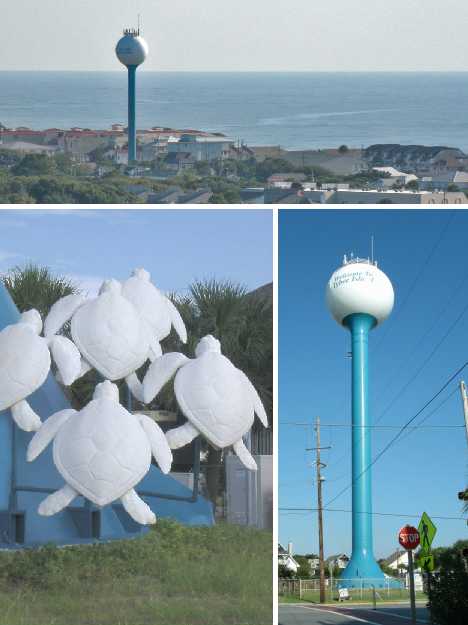 Tybee Island is the easternmost place in the state of Georgia and was the first place James Oglethorpe landed before moving on to Savannah. More notoriously, the US Air Force lost a hydrogen bomb just off the coast of Tybee Island in 1958 and it remains there to this day.citizens. 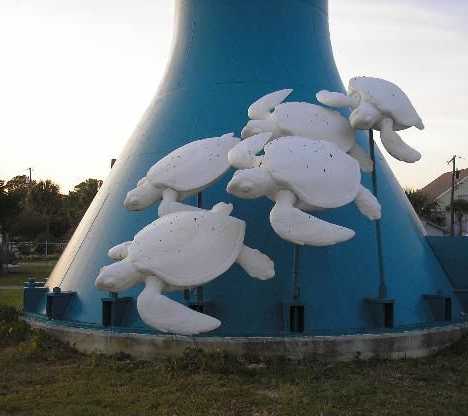 Perhaps in order to deflect attention from what some say is a ticking time bomb, the good people of Tybee Island set up a water tower decorated around its base with a fleet of endangered Loggerhead Turtles. Just keep thinking happy thoughts, citizens. 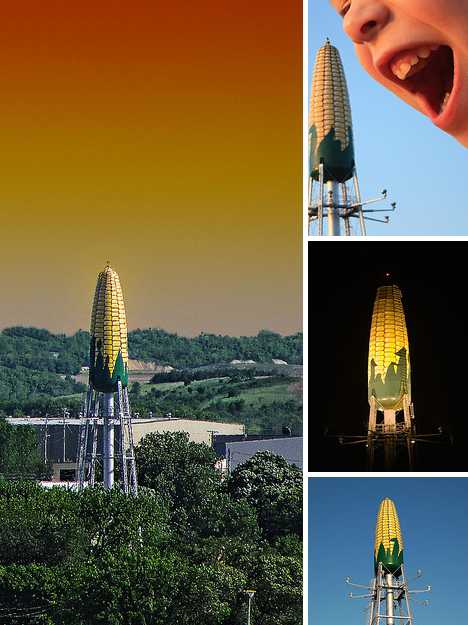 The Corncob Water Tower at the Seneca Foods plant in Rochester, MN, is said to be the “World’s Largest Ear of Corn.” It’s anatomically correct as well, having the correct number of kernels per row. The tower is yet another Great Depression feel-good project, having been built in 1931. It’s been re-painted several times and a night lighting system added sometime later adds a golden glow to the Rochester night. 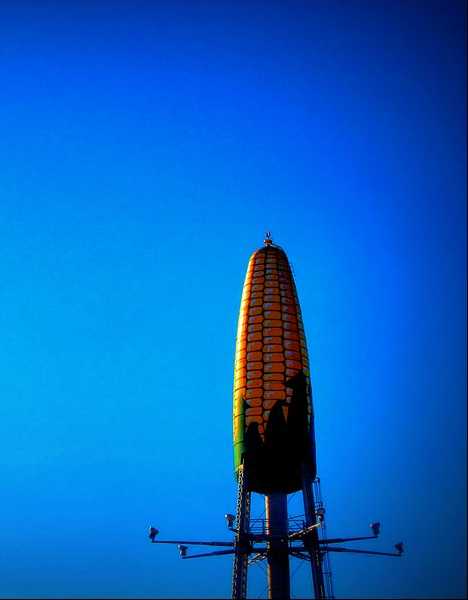 Small as water towers go, the 60ft tall Seneca Foods tower has a capacity of 50,000 gallons. It’s typical of water towers constructed to serve a single specific factory instead of your average-sized neighborhood. 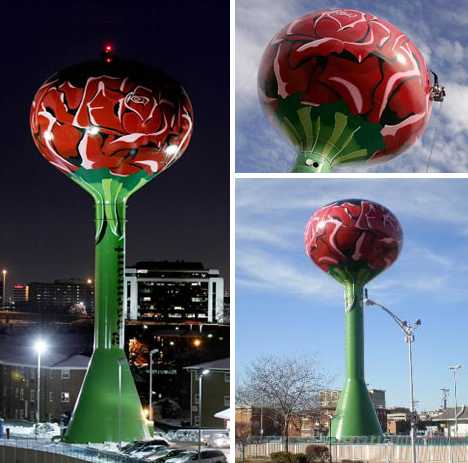 (images via: Tnemec and IgoUgo/FromChicago)

The Rosemont Water Tower was built in 1982 and has since become widely recognized for its artistic paint job, renewed in 1990 and 1998. The large capacity (500,000 gallon) tower is of the modern, inverted-teardrop design. 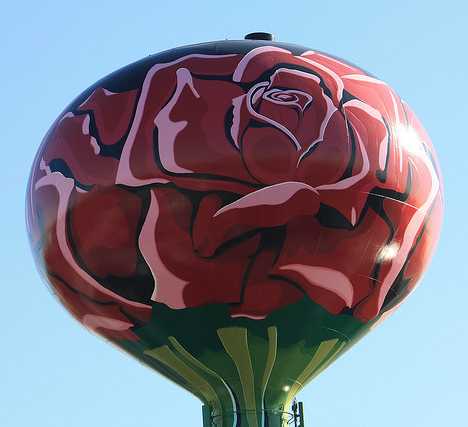 Modern water towers have lost a certain amount of individuality – most are painted white or pale pastel hues in order to reflect heat. The Rosemont Water Tower goes against the grain with its bold, bright colors and the rose design itself, which breaks the monotony of the structure into green stem and red rose. 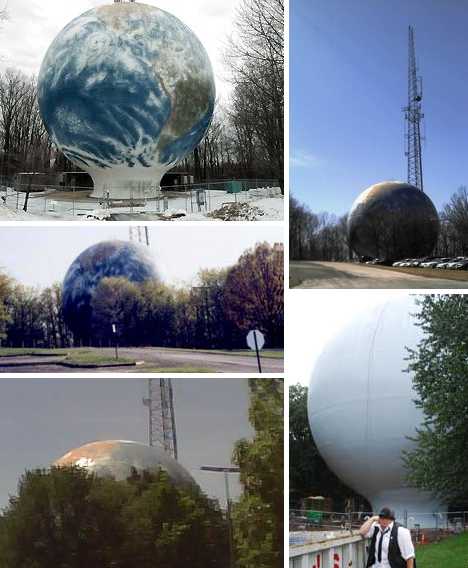 (images via: Frankenstein vs The World, Roadside America and Germantown Patch)

The 33-year-old Earthoid Water Tank sits on the Germantown Campus of Montgomery College in Germantown, Maryland. The 100ft tall globular tank holds an impressive 2 million gallons and displays a very accurate, difficult to paint reproduction of Our Planet in all its oceanic, typhoon-infested glory by artist Peter Freudenberg. 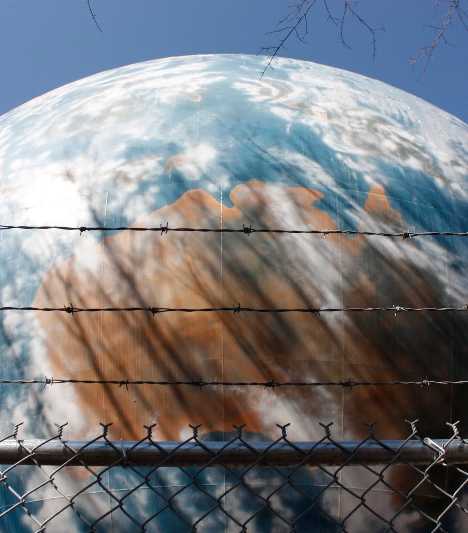 The Earthoid Water Tank survived a close brush with municipal economics in early 2011 when local authorities were asked to choose between restoring Freudenberg’s mural or repainting the tank as a baseball. Luckily, common sense won out and restoration is in progress. “The Earthoid has become quite a symbol for the community as well as Montgomery College,” stated Montgomery County Commissioner Gene Counihan. “It is one of the most significant landmarks in Montgomery County.” I’m guessing a 100ft tall baseball would be too, Gene, but the Earthoid is way cooler. 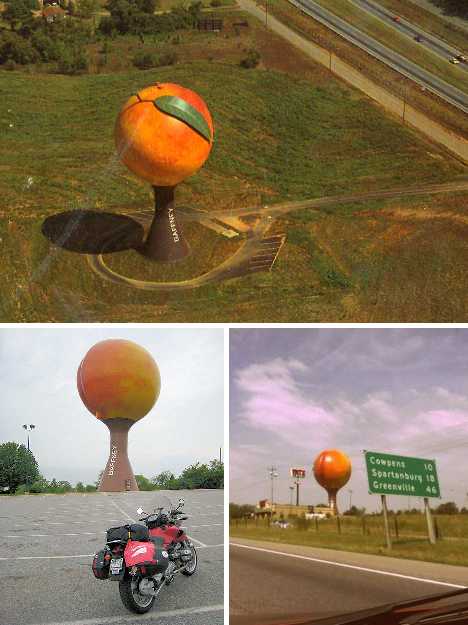 If your name is James and you’ve lost a giant peach, the town of Gaffney, South Carolina would like a word. Kudos to the un-named artist or artists who painted the so-called “Peachoid” in 1981 for emphasizing its peachiness with a seven ton, 60-ft long leaf, thus distracting the attention of those who instead see a massive orange gluteus maximus. 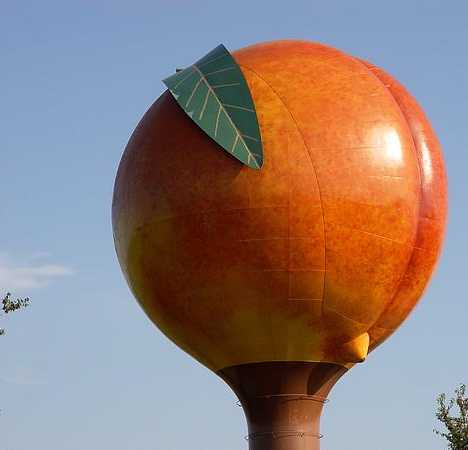 The million-gallon Peachoid is situated along Interstate 85 in Gaffney, the “Peach Capital of South Carolina.” It was painted by a local artist who, it is said, studied local peaches for hours in order to get the look down pat. Fifty gallons of paint in a total of twenty different colors were used. 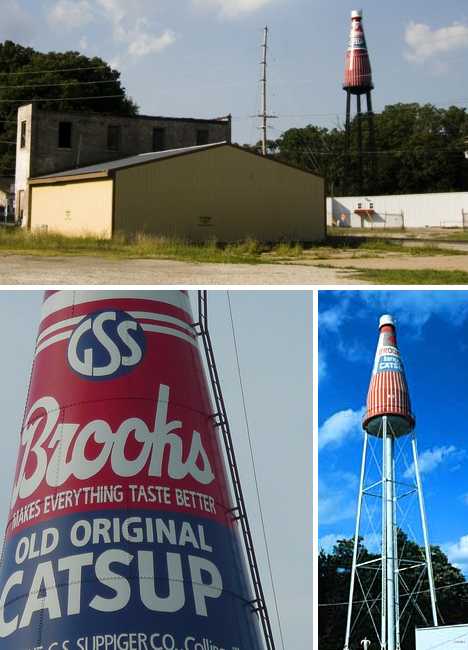 Blood might be thicker than water but we can’t very well have a Blood Tower, can we? Well, maybe the Red Cross can but for the rest of us, the Brooks Catsup Water Tower in Collinsville, Illinois will have to do. Erected in 1949, “The World’s Largest Catsup Bottle” served the Brooks Catsup factory into the 1960s when catsup production was moved to Indiana. 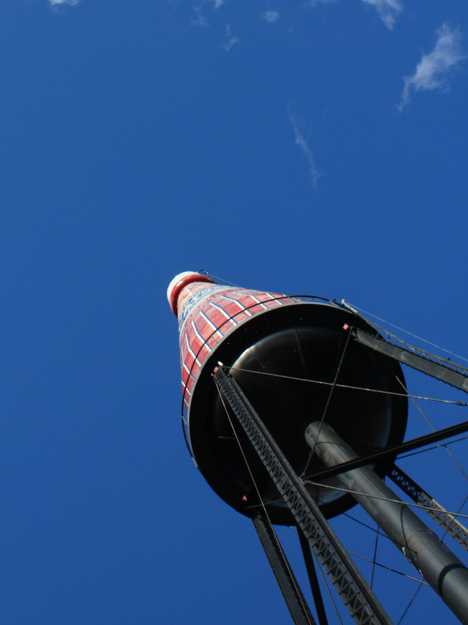 Emptied of water, the tower was used as a warehouse until 1993 when the company sold the remainder of its facilities in Collinsville. A local preservation committee then took up the task of repairing, maintaining and spiffying up the tower as required. It’s a labor of love locally and one with international ramifications: visitors from around the globe have heard of the Brooks Catsup Water Tower and some even visit Collinsville to see it in person. What say ye to that, Colonel Mustard? 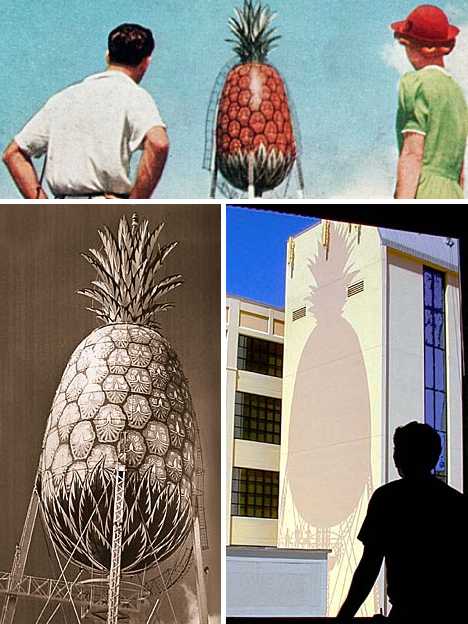 (images via: A Pineapple Heart and Honolulu Star-Bulletin)

How dya like THEM pineapples? The Dole pineapple water tower weighed a hefty 30 tons when filled with 100,000 gallons of water, which it often was while serving the needs of Dole’s flagship Honolulu plant. Erected way back in 1927, the tower was used up until 1989. Though efforts were made to preserve this historic Honolulu landmark, rust and corrosion issues led to the tower’s being dismantled in October of 1993. 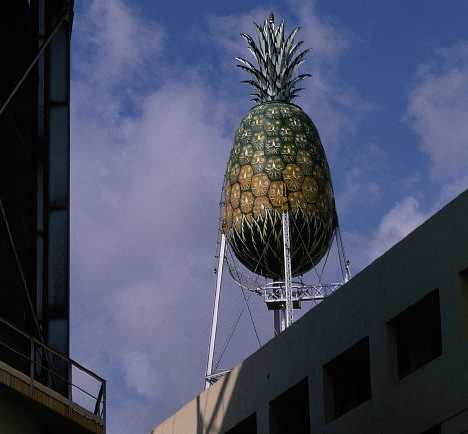 The Dole pineapple water tower is perhaps the only structure of its kind to have been memorialized: a detailed shadow of the tower similar to the one it would have cast in bygone days has been painted onto the outside wall of a neighboring office building. Now that, my friends, is sweet!

“The Eyes of Texas” 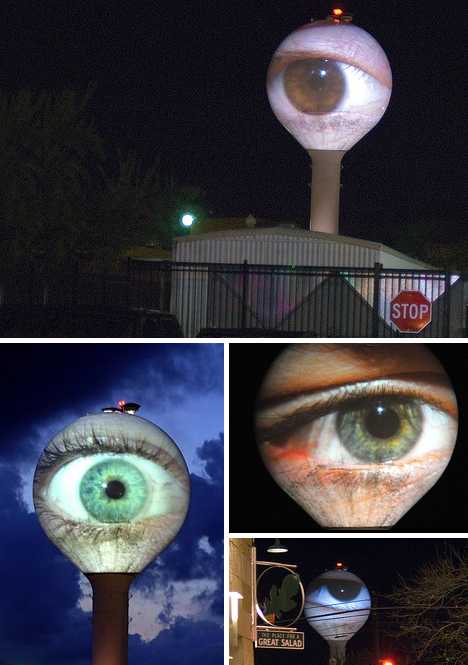 (images via: Austin Chronicle and Dons) 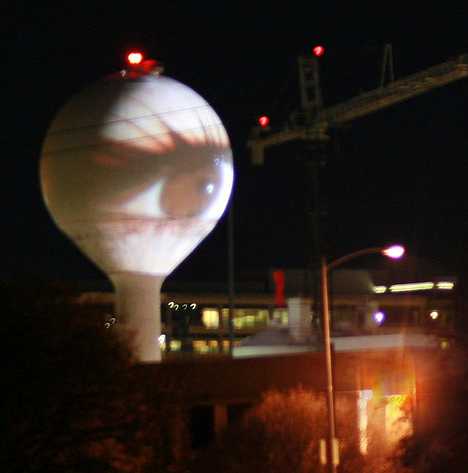 Savisky’s unique example of projection art was both effective and impermanent – the Green Water Treatment Plant water tower used as a backdrop looked none the worse for wear the next morning. How many of those celebrating New Years Eve in Austin could say the same? 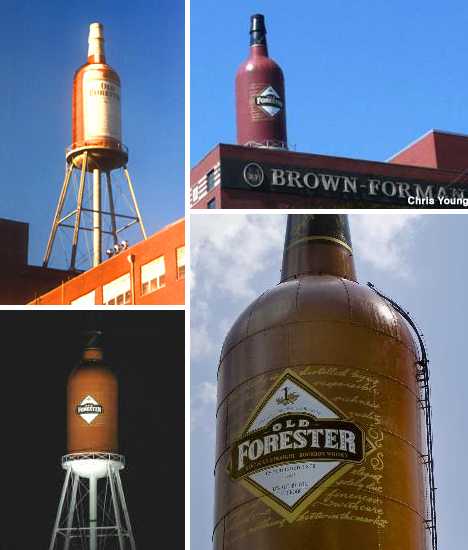 Oh to live in a town where the taps dispensed bourbon… the water tower would be a giant Old Forester Bourbon bottle, and that’s when I woke up. Citizens of Louisville, Kentucky are living that dream – well, not the bourbon flowing from taps part but there IS a huge bourbon bottle water tower just west of downtown and its been there, looming over Brown-Forman’s headquarters building, since 1936. 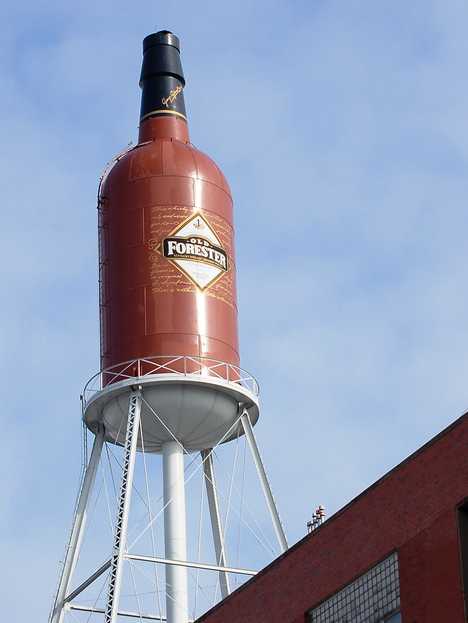 The Old Forester Water Tower celebrates and commemorates Old Forester Bourbon, America’s first glass-bottled bourbon which has been in production non-stop – including during Prohibition – since 1870. Times have changed since then, and since the dark Depression years when the water tower was constructed. Folks still enjoy Old Forester bourbon, especially around Kentucky Derby time, but the neighborhood where the water tower stands has seen better days… BYOB and perhaps a trusty sidearm if you’re going to take a look in person. 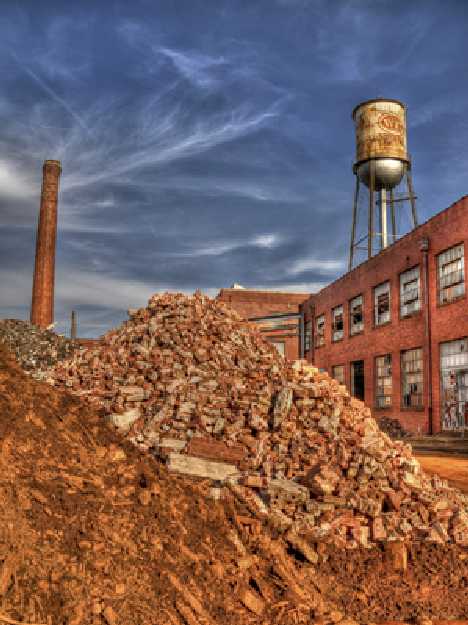 It ain’t easy being an attractive water tower, stuck out in the open season in and season out, often for numerous decades. Though what’s inside is what really counts, water towers have the ability to instill a sense of pride, community and affection just by looking good or at least, appearing unique. The very best (and, come to think of it, the very worst) are simply out standing in their fields.