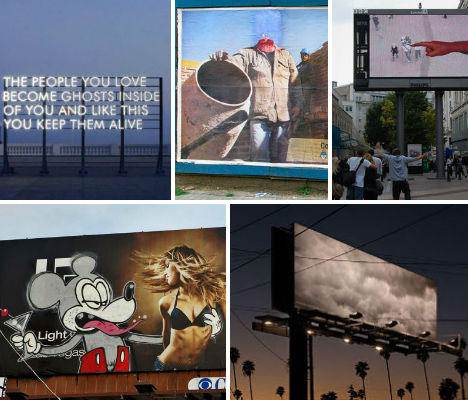 While billboard advertising can occasionally shock us with totally unexpected visuals, by and large, these massive champions of commercialism are not exactly pretty or interesting. Enter artists from around the world, who – with permission or not – come in and replace those ads, whether to subvert the original message or just to make passersby smile. 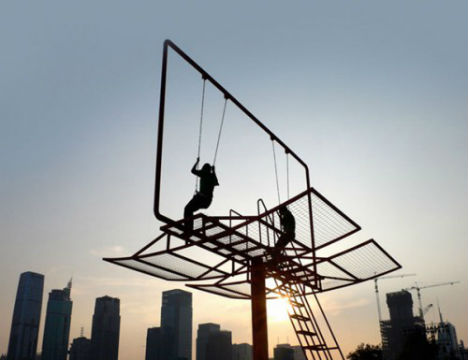 A billboard becomes a place for interactive play, made into a swing set with incredible views of New York City by artist Didier Faustino. Entitled ‘Double Happiness’, the project “responds to the society of materialism where individual desires seem to be prevailing over all. This nomad piece of urban furniture allows the reactivation of different public spaces and enables inhabitants to reappropriate fragments of their city.”

“They will both escape and dominate public space through a game of equilibrium and desequilibrium. By playing this “risky” game, and testing their own limits, two persons can experience together a new perception of space and recover an awareness of the physical world.”

Not only did Public Ad Campaign‘s New York Street Advertising Takeover whitewash 120 illegal advertisements located throughout the city, it also brought in over 50 artists to transform these new blank canvases into works of art. Instead of displaying an onslaught of commercialism, these spaces became interactive spaces for messages of peace and local pride. See more at Animal New York. 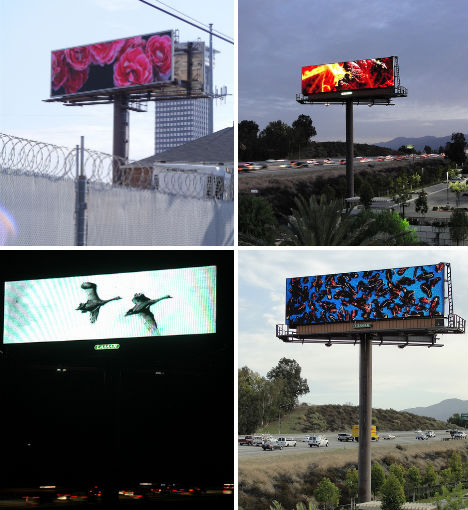 Based in Richmond, Virginia, the Billboard Art Project has spread across the United States as artists take over those massively distracting digital billboards with LED displays. Though it’s not totally subverting the advertisements – they still run as usual – the art appears momentarily in between each ad, perhaps prompting onlookers to wonder exactly what it is that they’re looking at. Many of these works were captured by the organization’s Flickr group. 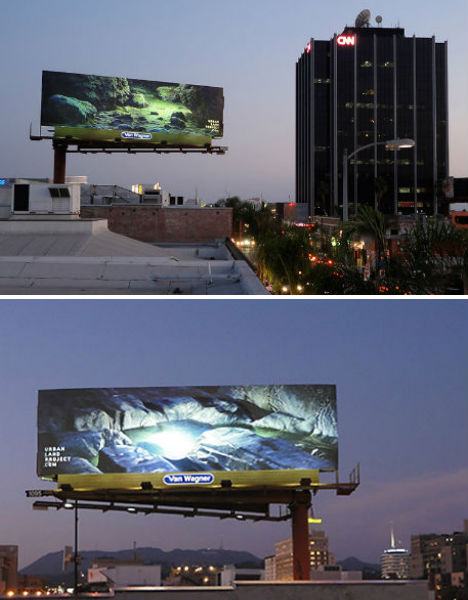 (images via: the anthropologist)

Rather than an ad for yet another local bond company or huge international bank, locals in urban Los Angeles and Philadelphia got to view soothing images of the nature that can be found right within their own cities. Photographer Tim Simmons captured images of each city’s hidden natural wonders and displayed them on billboards for ‘The Urban Land Project.’

Art In Stead of Ads 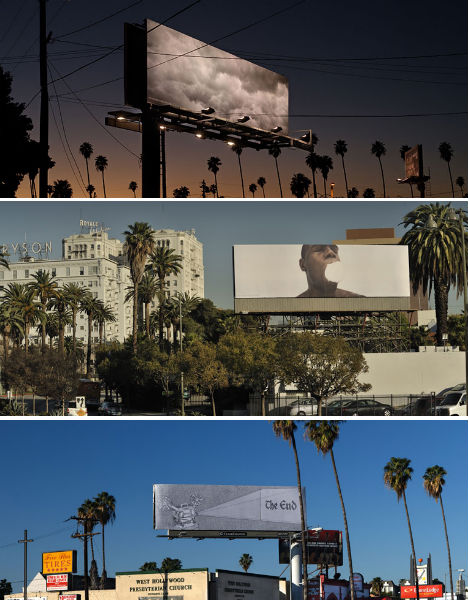 (images via: how many billboards)

21 commissioned works by leading contemporary artists were presented onb billboards throughout Los Angeles in February and March 2010 for the project ‘How Many Billboards: Art in Stead’.

“The philosophical proposition of the exhibition is simple: art should occupy a visible position in the cacophony of mediated images in the city, and it should do so without merely adding to the visual noise. How Many Billboards? Art In Stead proposes that art periodically displace advertisement in the urban environment.

Billboards are a dominant feature of the landscape in Los Angeles. Thousands line the city’s thoroughfares, delivering high-end commercial messages to a repeat audience. Given outdoor advertising’s strong presence in public space, it seems reasonable and exciting to set up the possibility for art to be present in this field. The sudden existence of artistic speech mixed in with commercial speech provides a refreshing change of pace. Commercial messaging tells you to buy; artistic messaging encourages you to look and to think.”

Hand from Above by Chris O’Shea 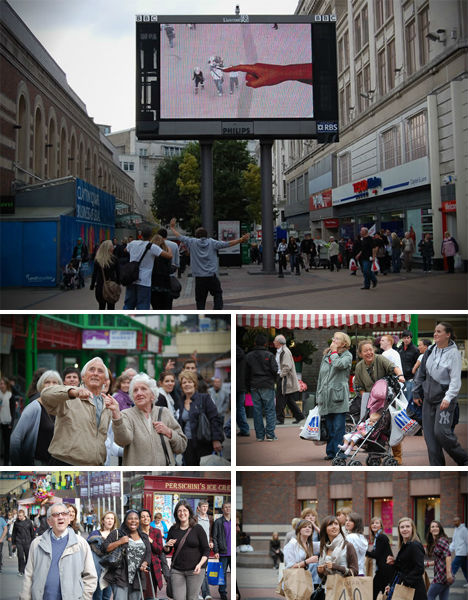 Chris O’Shea imagines a world in which we humans are manipulated by an outside force, unseen except for a giant hand. In O’Shea’s interactive public art exhibit for BBC Big Screen in Liverpool, pedestrians watch a live feed on a billboard as the giant hand pokes and prods them in real time.

From Gajitz: “The installation is called Hand From Above, and it’s geek art at its finest. It was created, according to the artist, to encourage people to slow down in the midst of their daily routines. By throwing something completely unexpected into their day, O’Shea is injecting a little laughter into everyone’s lives. If the video above is any indication, most pedestrians love the project. Only a few walked by without even a smile, and most who saw themselves being harassed on-screen stopped to play along.” 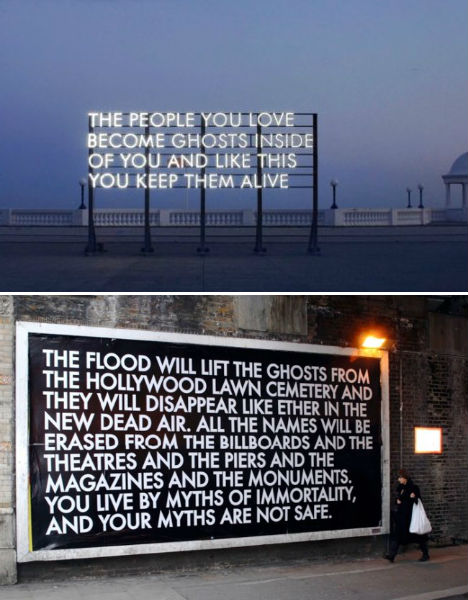 Artist Robert Montgomery replaces advertising with profound and poignant messages about love, human interaction and the world we live in. The artist “works in a poetic and melancholic post-situationist tradition.” His typographic works bear such disconcerting and thought-provoking messages as this: “The flood will lift the ghosts from the Hollywood Lawn Cemetery and they will disappear like ether in the new dead air. All the names will be erased from the billboards and the theaters and the piers and the magazines and the monuments. You live by myths of immortality, and your myths are not safe.” 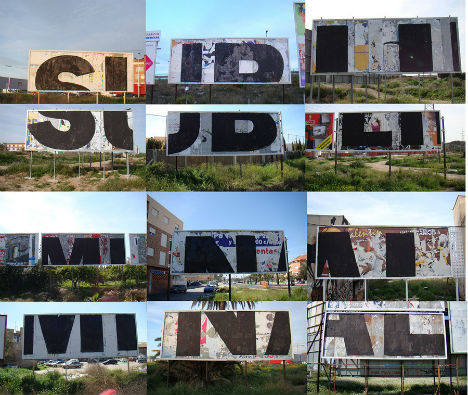 Billboards throughout Murcia, Spain bore strange fragments of type that didn’t make sense until seen as a whole, revealed by the artist Sam3. “”Murcia is infected with the plague of billboards everywhere, most of them neglected. 12 altered billboards to write a word that is hiding behind all this.”

U.S. Marines: The Change is Forever 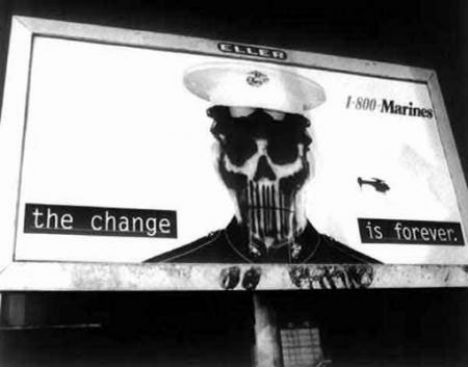 It was all too easy to subvert a billboard by the U.S. Marines, which really did bear the ambiguous slogan ‘The Change is Forever’. An unidentified artist simply covered the young man’s face with that of a stylized skull, giving it a new meaning altogether.

Rebel Without a Lung by Jorge Rodriguez Geralda 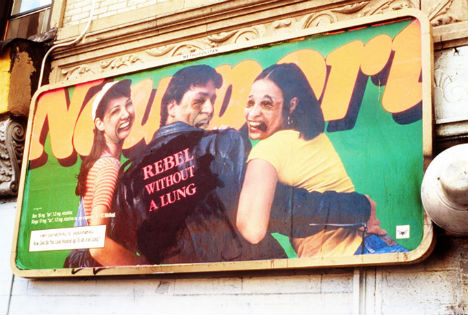 Artist Jorge Rodriquez Geralda is known for painting his own images onto public surfaces like street signs, the sides of abandoned buildings and even entire construction sites. One notable early work is ‘Rebel Without a Lung’, a subversion of a Newport cigarette ad in New York City, completed in 1994. 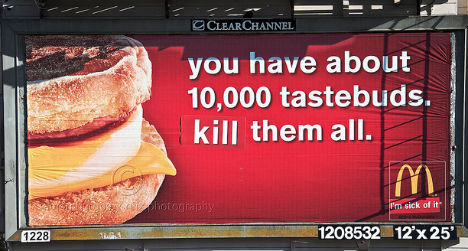 It wasn’t too hard to echo growing public sentiment about the quality of McDonald’s fast food. The Billboard Liberation Front just made two small changes to this McDonalds billboard in San Francisco so that the text reads ‘You have about 10,000 tastebuds. Kill them all.’ At the bottom right corner, the company’s slogan ‘I’m lovin’ it’ becomes ‘I’m sick of it.’ 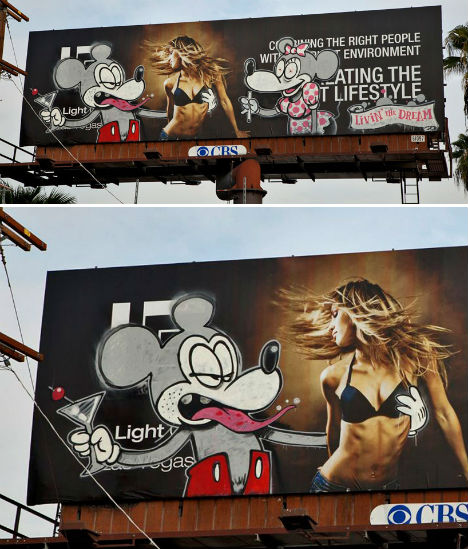 Graffiti artist Banksy notably altered a billboard in Los Angeles prior to the Academy Awards in February 2011, likely to call attention to the nomination of his documentary ‘Exit Through the Gift Shop’. A rather lecherous Micky Mouse, cocktail in hand, was painted onto an existing billboard along with a drugged-out Minnie Mouse and a banner reading, ‘Living the Dream.’ It was quickly removed. 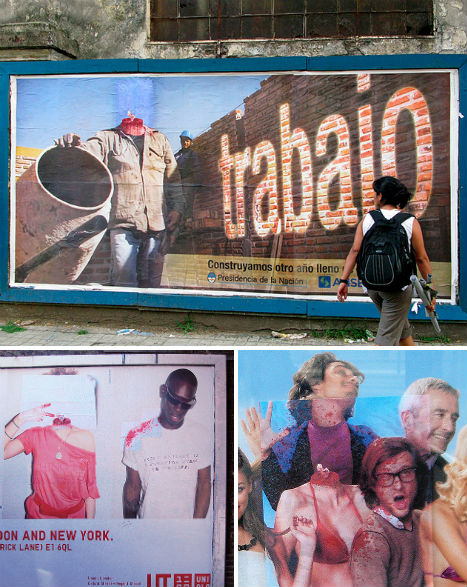 More than a century after Jack the Ripper, London has a new killer on the prowl. This one may be taking the heads of billboard and advertising figures rather than living humans, but the works are still pretty gory. Not only are the heads painted out of the ads, but there’s lots of spattered blood left behind.