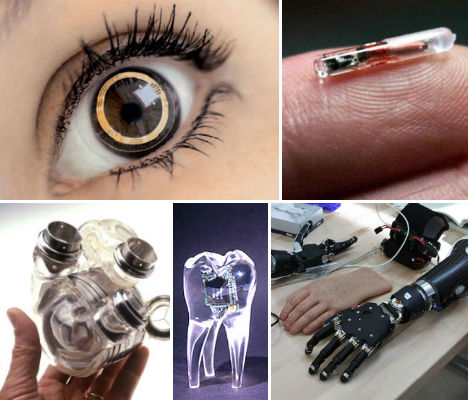 Moving beyond our physical limitations with the help of our greatest strength – our brains – we humans are beginning to blur the lines between biology and technology. We can gain super-strength with the help of electric exoskeletons, unlock doors with the wave of a hand, manipulate computers with our minds and implant devices that help the blind to see and the paralyzed to walk. Ranging from devices and tech that are already available to those that are still in development, these 12 inventions are sci-fi come to life. 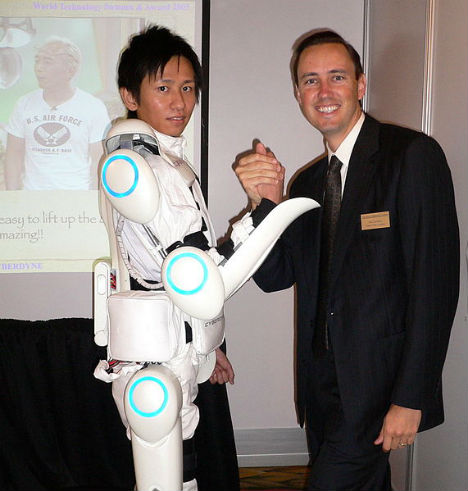 Powered exoskeletons are among the most sci-fi of modern prosthetics, at least in terms of appearance. Worn as suits, these exoskeletons – which have a power supply that aid in limb movement – can help assist and protect soldiers, construction workers and others with dangerous jobs, enabling them to perform feats of strength that aren’t typically possible. Calling to mind Iron Man (without the jet pack and all the fancy weapons, of course), the suits are mostly still theoretical, but some applications have already been carried out. In Japan, ‘Hybrid Assistive Limb’ suits are commercially available to medical professionals to help them lift and carry elderly patients.

Retinal implant systems can actually help the blind see again, and scientists believe that they may actually be available for human trials within a year or so. The prototype pictured above, created by a team at MIT, works in conjunction with special glasses fitted with a small camera that relays visual data to a chip mounted on the outside surface of the eyeball. The firing of electrodes under the retina could stimulate the optic nerve, allowing the visually impaired to see again. The recent discovery of a man-made, bio-compatible diamond that makes an excellent stimulating electrode may help in advancing this kind of technology. 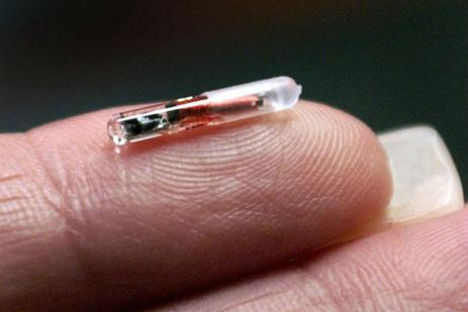 People tend to be pretty divided on RFID implants, either hailing them as an extremely convenient innovation or decrying them as ‘the mark of the beast’. But RFID microchip implants do have a lot of practical uses: they could eliminate the need for keys, allowing you to unlock the doors of your home or your car with a wave of your hand. They may also be used to track surgical sponges during operations to ensure that they aren’t left behind inside patients. The FDA has approved the implantable microchips, which are about the size of a grain of rice, for use in humans in 2004. 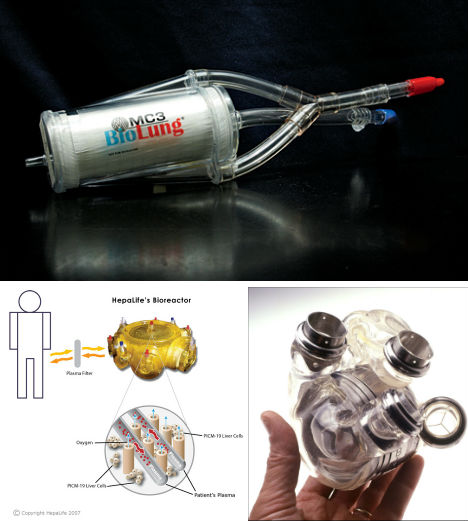 If you’ve ever known someone on a transplant list for a vital organ like a heart or a lung, you know just how harrowing the process can be. But what if, when organs failed, people could receive shiny new artificial replacements instead of live ones? Technology is advancing in this area at an incredible pace, and new artificial organs including hearts, lungs, kidneys, stomachs, livers and even muscles are in development. For now, the devices that have been approved for use are typically only implanted as a last resort. 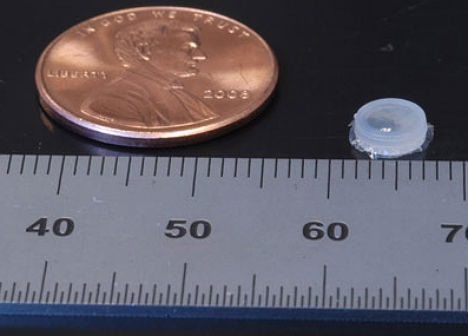 A tiny implant developed by scientists at MIT can be placed inside a tumor to monitor how it responds to treatment, giving doctors a less invasive and more accurate way to track its growth. Currently, tumors are typically monitored by biopsy, which is the removal of tissue. The implant could provide up-to-the-minute information about the tumor’s exact state, including whether it has begun to spread to other areas of the body. 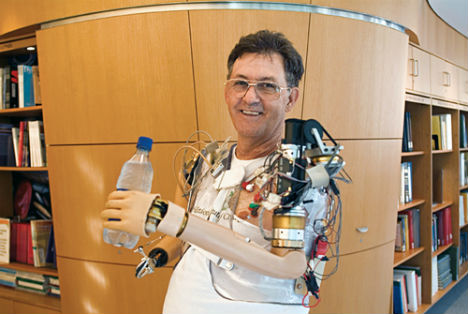 Extraordinary advances have been made recently in the area of prosthetic limbs, making them much more functional. New bionic limbs can be controlled by nerve tissue in the bodies of amputees, restoring movement to hands, arms, feet and legs that have been lost. In fact, researchers have developed fiber optics that can connect these bionic limbs to nerves well enough to restore feeling.

Brain Implants That Can Power Limbs and Computers 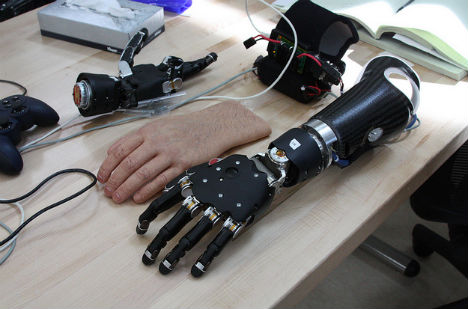 Experimental devices that read brain waves are enabling paralyzed people to use computers, and may even help them walk again. In 2004, surgeons implanted 96 electrical sensors into the brain of 25-year-old Matt Nagle, allowing him to use a detached robotic arm to move a mouse cursor just with his thoughts. Sensors only slightly thicker than a single human hair can be inserted into the skull and sit on top of the brain, picking up nerve impulses and relaying them to prosthetics. And Intel Corp. believes that we could all be controlling our computers with our brains by 2020 with brain implants that sense thoughts. 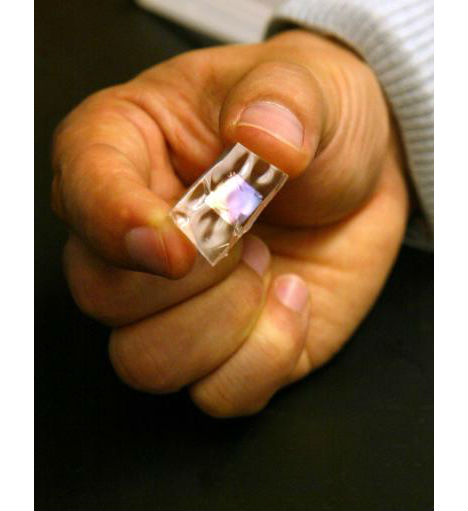 Our natural, everyday body movements like walking and breathing could be used to power our own devices like cell phones and heart pacemakers. Scientists are working on thin, implantable rubber films that can harvest energy from these movements, refining the manufacturing processes that would allow them to combine piezoelectric materials with rubber. It’s not clear how the energy would then be transmitted to devices – we’re imagining plugging our iPhones into USB outlets on our arms, which is kind of disturbing.

TV Screens for our Retinas 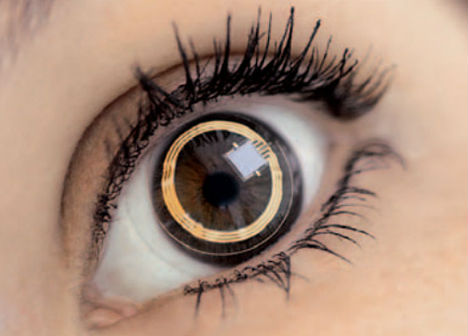 In another advancement that seems to have come straight out of the movie Minority Report, researchers at the University of Washington have developed tiny, semi-transparent LEDs that can be integrated into contact lenses, potentially making full-color displays possible. The LED arrays can display images on top of the retina, creating images that are in perfect focus. When the display is turned off, the array is invisible, so the contacts can be worn at all times. 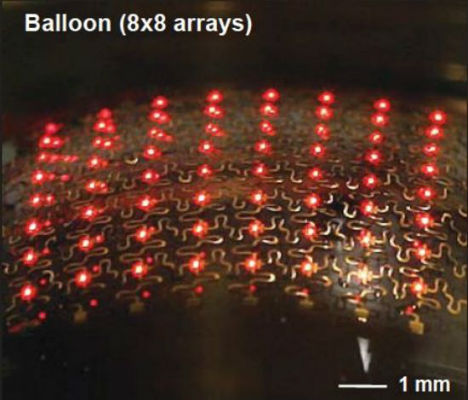 Ultra-thin sheets of LED arrays could be implanted under the skin, but unlike the contact lenses, the purpose of these lights would have nothing to do with entertainment. Researchers at the University of Illinois have created biocompatible polymers affixed with a mesh-like array of LED lights and photodetectors, which could  monitor wound healing, diagnose illnesses or control the delivery of drugs triggered by light. 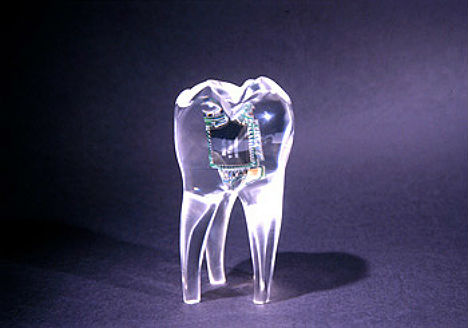 A decade after it was introduced, wireless receivers in teeth still aren’t exactly common. And most of us will gladly take Bluetooth over microchips in our teeth, thank you. But though it may still be in the realm of James Bond tech, the very possibility of turning your skull into one big signal receiver while your tooth plays music is enough to freak some people out. If you ask your neighborhood conspiracy theorist, he or she will probably tell you that you’ve already got one, surreptitiously slipped into your amalgam filling by your dentist. 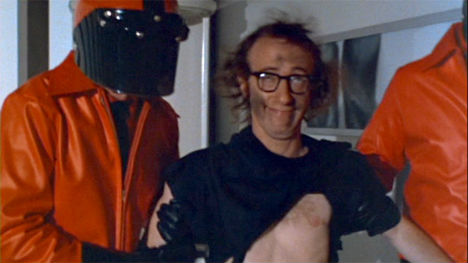 The ‘Orgasmatron’ is not just a figment of Woody Allen’s imagination. Though a little different from the retrofuturistic instant-orgasm pod in Sleeper, a real-world Orgasmatron does exist and could be on the market within a few years. A North Carolina doctor accidentally discovered that implanting electrodes into a patient’s spine to treat chronic leg pain could cause a sensation of an unexpected variety. Working further on the device, Dr. Stuart Meloy held a trial wherein five women who had lost their ability to orgasm regained it when implanted with the chip. The electrical impulses are sent with a remote control that allows users to change the timing and intensity.