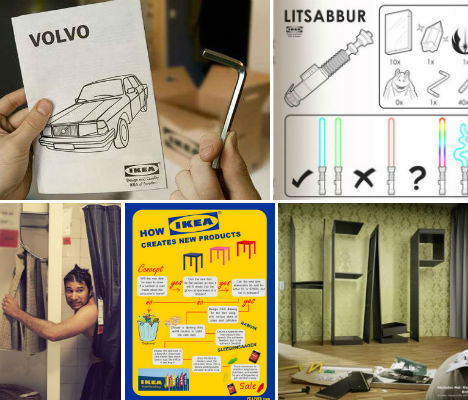 The purveyors of cheap-and-cheerful modern Scandinavian home goods have plied us with their glossy catalogs and Swedish meatballs, and we have responded with wide-eyed devotion. We flock to IKEA warehouse stores en-masse. We marvel at products with unpronounceable names. The most obsessed IKEA fans create fan art, write songs, beg to sleep there overnight and even get married at their stores. IKEA’s confusing instructions, unstable assembly jobs and miraculously efficient tiny spaces have inspired tributes both sincere and satirical. 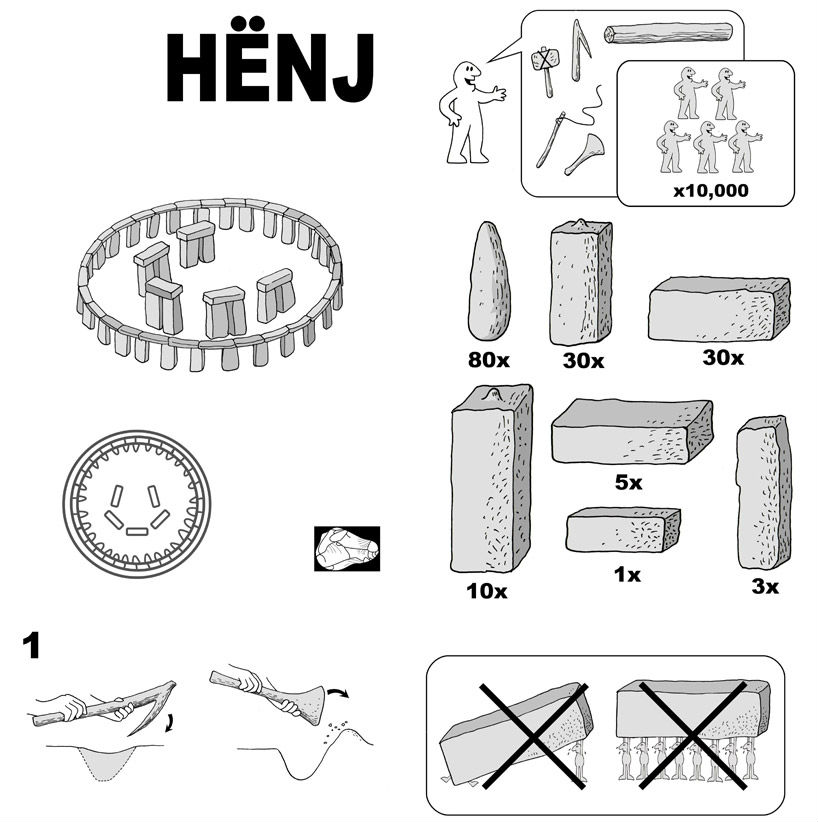 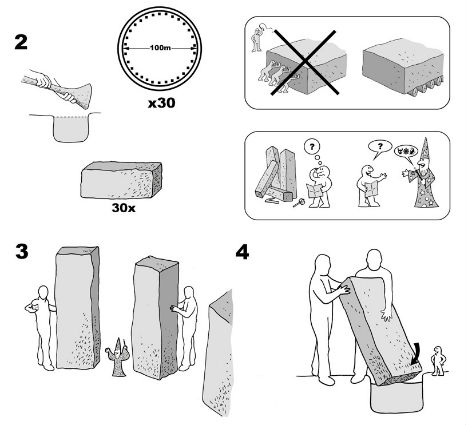 Wondering, like the rest of the world, just how Stonehenge was built? Let IKEA help you out with some instructions that make the whole process no less of a head-scratching mystery than the monument itself. These satirical diagrams by Justin Pollard, Stevyn Colgan and John Lloyd require 10,000 laborers, hundreds of stones and alcoholic beverages (so that you can cope with the frustration.) Additionally, they note “If plagued by demons or suffering from pestilence, seek advice from a druid before attempting assembly.” Said druid will apparently conjure some giants to helpfully slide the monoliths in place. See the full illustrations at Design Boom. 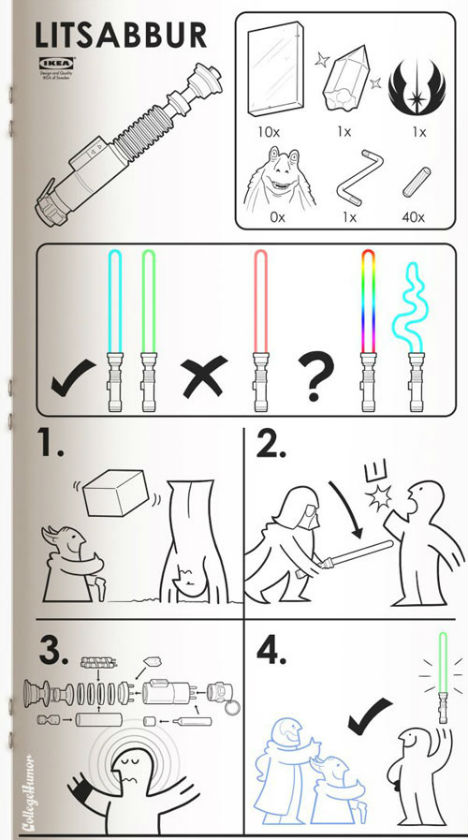 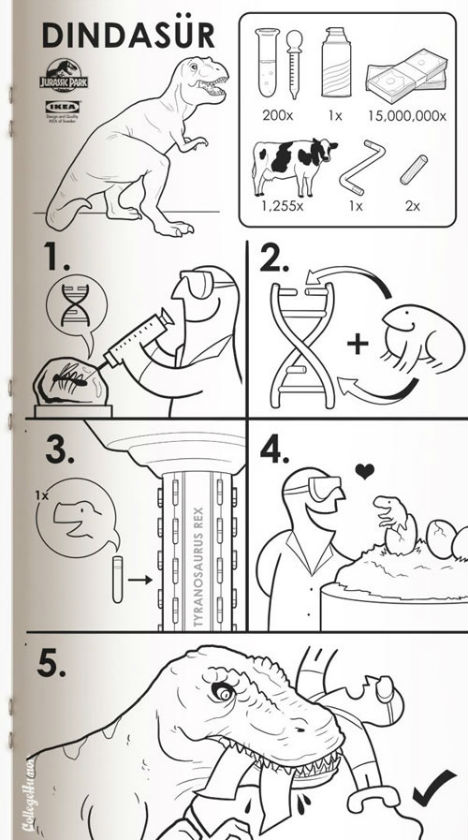 Want to make your own dinosaur? IKEA’s instructions dictate a material list of test tubes, syringes, special shaving cream cans, $15 million dollars, thousands of cows and a few of those handy (?) Z-shaped Allen keys. This set of sci-fi IKEA manuals will also tell you how to build your own light saber and time-traveling DeLorean. 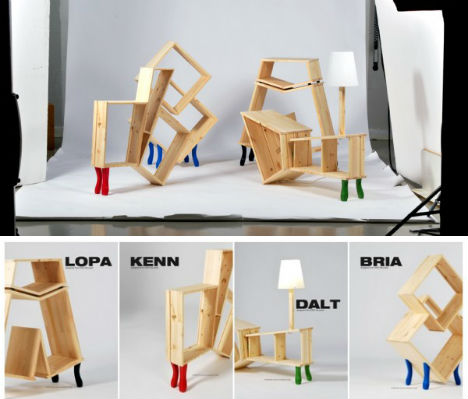 Maybe you should just ignore those instructions and use the components inside that flat-pack box to create your own Franken-IKEA design. That’s what Kenyon Yeh did for this series, putting the wood pieces together any way he felt like it and adding colorful legs. The result looks a bit like a Pixar movie set in IKEA’s warehouse, wherein all of the furniture sprouts legs and comes to life. 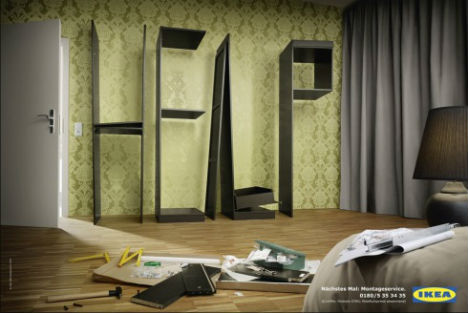 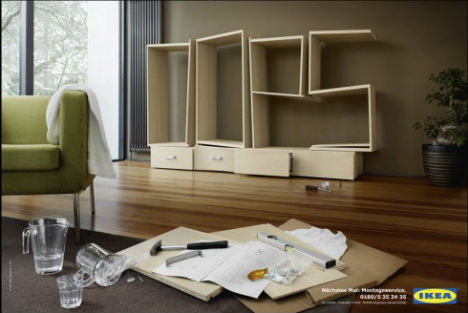 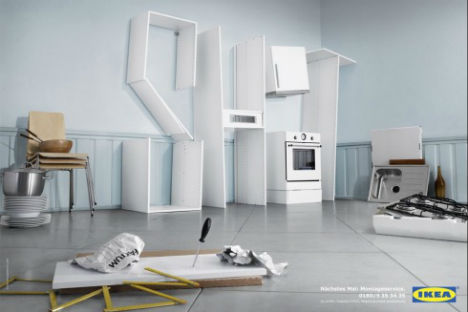 These hilarious images of IKEA assembly gone wrong aren’t satirical critiques of the mega-store. They’re actually real ads from IKEA Germany. The self-aware series has various furniture items spelling out the words ‘Shit’, ‘Oops’ and ‘Help’ in a bid to promote the furniture retailer’s assembly department. 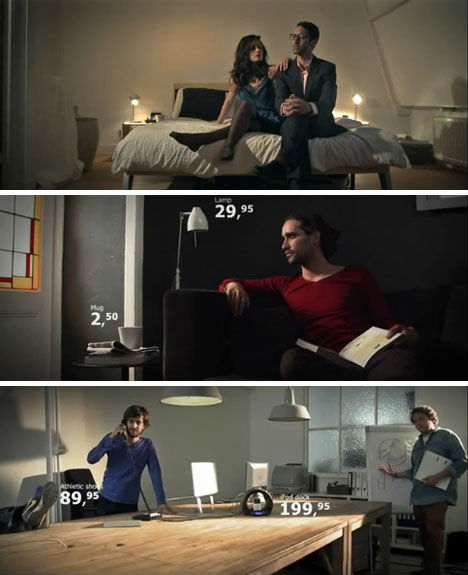 Any fan of the movie Fight Club has never looked at IKEA catalogs quite the same way as the rest of the population. With the glossy perfection of each photographed interior comes the insinuation that a home full of these products will bring happiness. A short independent film called Page 23 delves into the murky depths of reality hidden by the bright and cheerful facade. “Advertisements usually display unruffled domestic happiness. But, as we will see in Page 23, this world looks too good to be true. Behind the beaming smile of fashion models loom adultery and the stifling daily routine.”

IKEA in Song by Jonathan Coulton 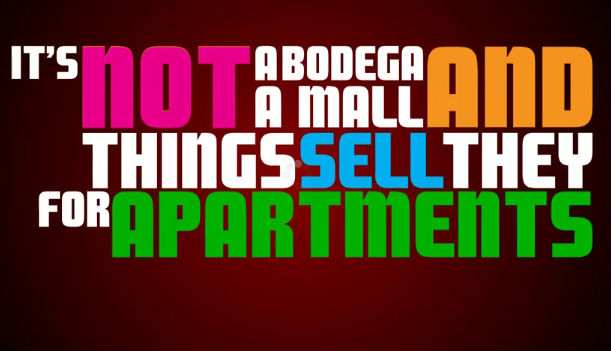 (images via: you tube)

Songwriter Jonathan Coulton wrote an ode to IKEA, telling a fictional account of the store’s birth that involves the Norse god Thor and a bunch of vikings. “IKEA: Just some oak and some pine and a handful of Norsemen.”

How IKEA Creates New Products: A Chart by Cracked 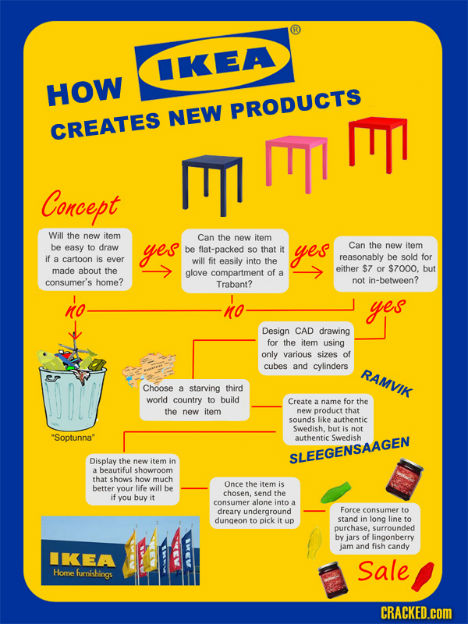 How does IKEA come up with the ideas for all of those oddly-named household items, anyway? Cracked has the whole process from concept to store shelves, including choosing a sort-of-authentically-Swedish-sounding-name and forcing consumers to go into a dreary underground dungeon to retrieve it. 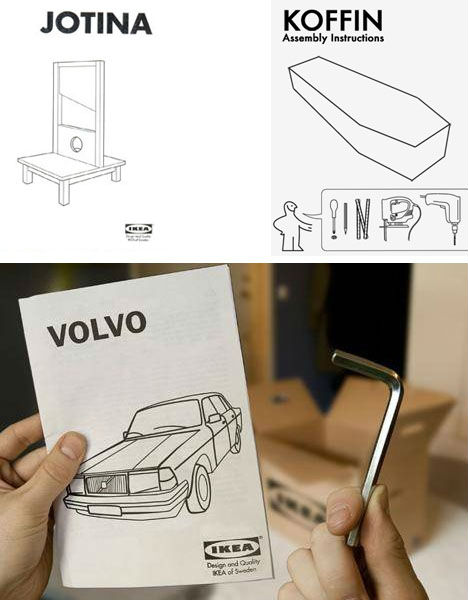 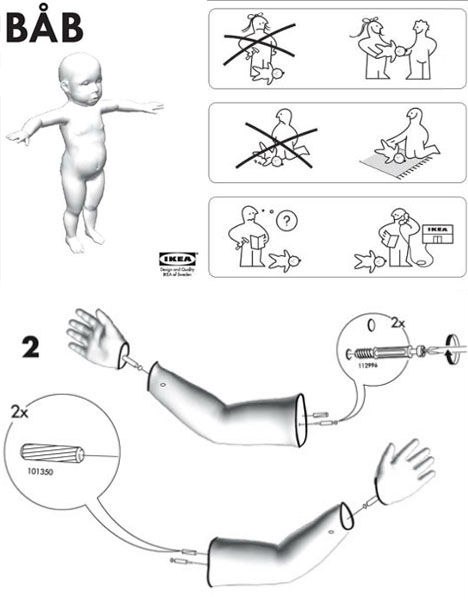 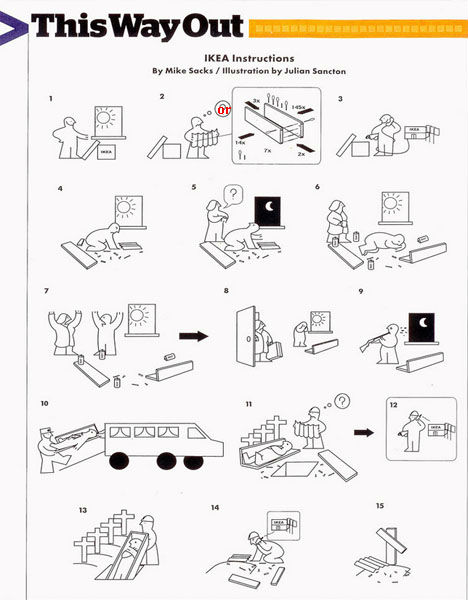 What if IKEA sold Volvos? Build-your-own-bomb kits? Instructions for assembling babies? These funny parodies of IKEA instructions imagine all sorts of things that the store could assist us with producing in a nightmarish alternate reality. One cartoon, by Mike Sacks and Julian Sancton, even shows how IKEA could help you orchestrate your own suicide, with the leftover parts from your self-built coffin used to build a shoddy cross for your grave site. 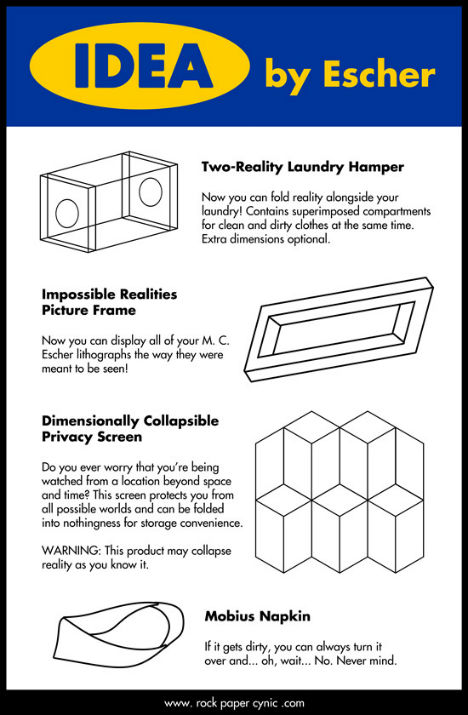 Comic site Rock, Paper, Cynic combines two creators of impossible constructions in one brilliant illustration. ‘IDEA by Escher’ turns a few of MC Escher’s mathematically-inspired explorations of infinity into IKEA products. ‘Warning: This product may collapse reality as you know it.’

What If You Lived at IKEA? By Christian Gideon 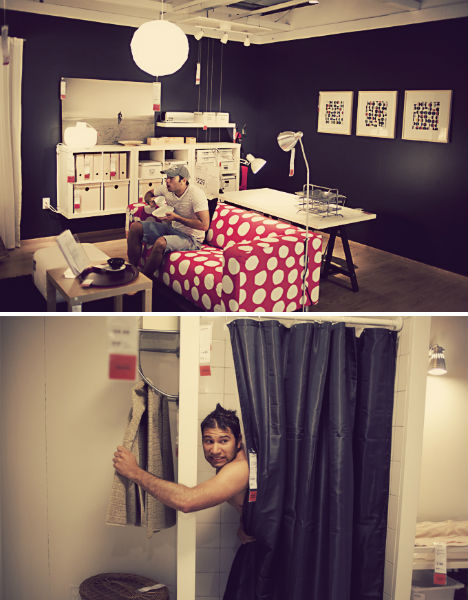 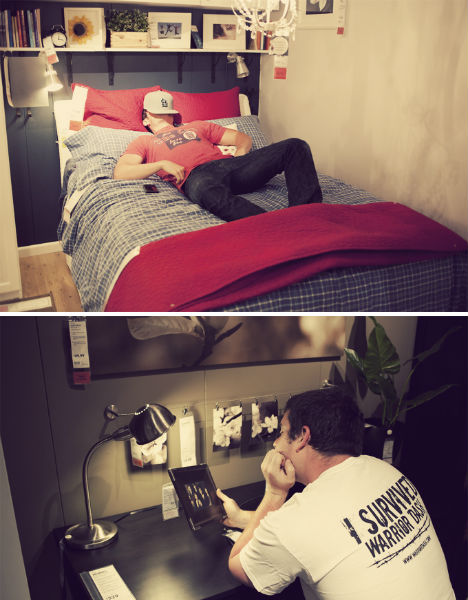 Photographer Christian Gideon explores the question, ‘What if you lived at IKEA?’ in a spontaneous shoot that turned the store’s pristine whole-room displays into real temporary living spaces, guerrilla-style. Gideon shot his models pretending to shower, sleep, cook and gaze fondly at stock photography families in various IKEA environments. 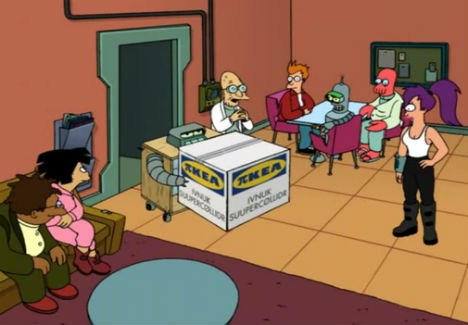 (image via: you tube)

Maybe in the future, IKEA will still be making ‘Affordable Swedish Crap’ like Professor Hubert J. Farnsworth’s SuperCollider. In this episode of Futurama, the ‘Pi-kea robot’ makes a special delivery of some high-tech equipment and the assembly process is exactly what you would expect. 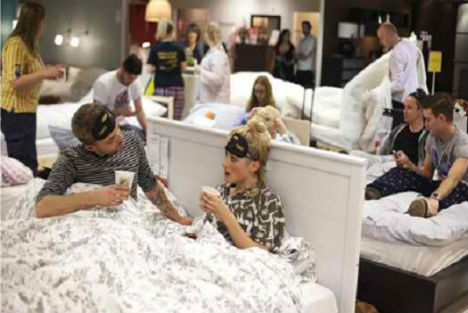 Some people love IKEA so much, they want to stay there overnight. Seriously. IKEA sanctioned a Facebook Fan Sleepover for 100 people at the Essex IKEA store. They even showed a movie and offered massages and manicures. Contest winners who attended the sleepover chose their own bed linens to use for the night. and take home. The event was created after officials at the store stumbled upon a Facebook group called ‘I Wanna Have a Sleepover in IKEA’ on Facebook.

First-Ever Wedding in an IKEA

It’s not art or design, but this is definitely the ultimate expression of IKEA fandom. Two self-professed ‘superfans’ became the first couple to ever get married inside an IKEA store. The Maryland couple went on a date at the College Park store, and exactly two years later, they returned to exchange vows. IKEA allowed them to use the space at no charge. See photos at WTOP.