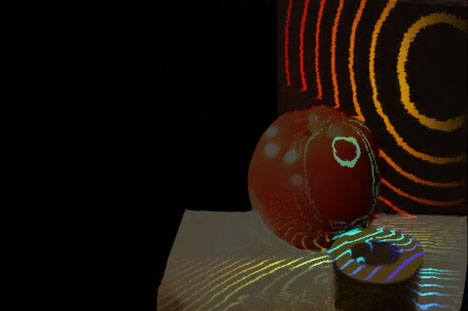 Nothing moves faster than light, right? True as that may be in theory, a team at MIT has developed a method for visualizing its propagation to amazing effect in practice.

Slowed down and turned into film format, an illuminated tomato goes from ordinary to uncanny as a snaking arc of white light approaches in a billionth-of-a-second burst, then deforms to move across it, with an unrivaled FPS rate.

And the impact goes beyond making neat little films: “Beyond the potential in artistic and educational visualization, applications include industrial imaging to analyze faults and material properties, scientific imaging for understanding ultrafast processes and medical imaging to reconstruct sub-surface elements.”

So how does it work? Per their abstract: “The effective exposure time of each frame is two trillionths of a second and the resultant visualization depicts the movement of light at roughly half a trillion frames per second. Direct recording of reflected or scattered light at such a frame rate with sufficient brightness is nearly impossible. We use an indirect ‘stroboscopic’ method that records millions of repeated measurements by careful scanning in time and viewpoints. Then we rearrange the data to create a ‘movie’ of a nanosecond long event.”