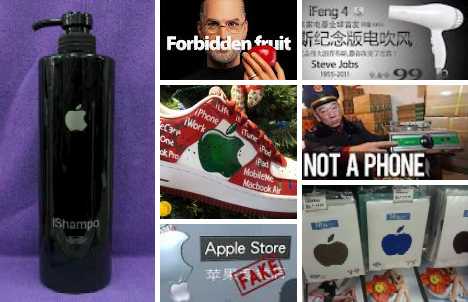 If imitation is the sincerest form of flattery, then a host of eager entrepreneurs really, REALLY admire Apple Inc. and its visionary founder & CEO, the late Steve Jobs. Dodging Cupertino’s copyright lawyers at every step, they seek to juice up their bland with the famous Apple brand. These 10 outrageous Apple brand and logo ripoffs showcase the most egregious transgressions of those eager to co-opt the fruits of Apple’s labor. 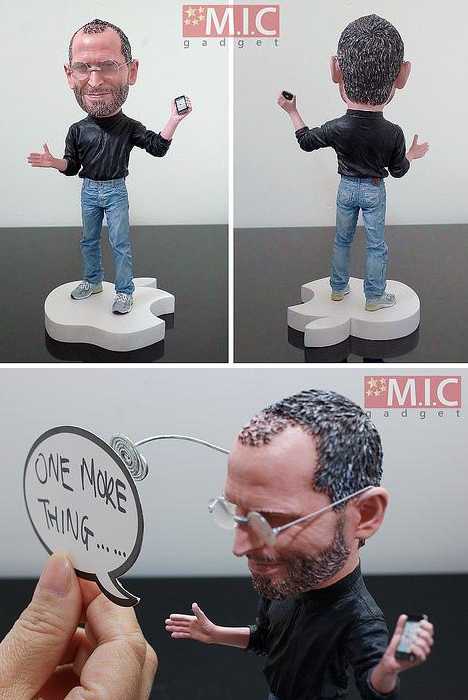 The wildly popular, unofficial and unauthorized Steve Jobs Action Figure was in many ways a victim of its own success: word of the figurine spread across the globe and permeated the deepest corners of Cupertino: yep, the smoky back rooms where the legal beagles roam. Kudos to M.I.C Gadget for their sublime expertise in designing this superbly detailed action figure; boo-dos to the suits for shutting it down. 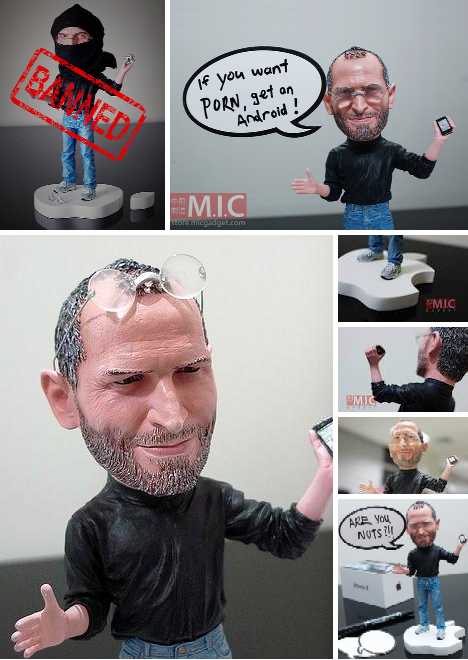 (images via: M.I.C Gadget and Walyou)

Give M.I.C Gadget credit for trying – in a series of attempts to satisfy Apple Inc’s legal department they first relabeled the figurine as the “Pineapple CEO”, then swathed it in a burka-like black face covering. All to no avail: the product was so accurate in its portrayal of Steve Jobs there was just no way to pass it off as anything else. 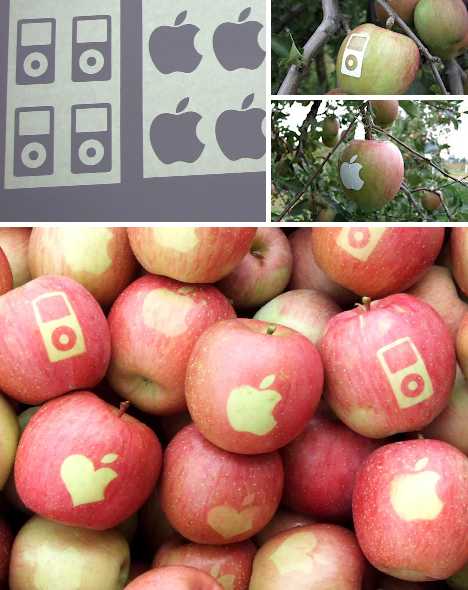 Call them Apple Apples or the even more redundant iApple, these logo branded fruits still taste sweet. The concept originated by a Japanese fanboy with far too much time on his hands is based on the fact that apples won’t turn red if they’re not exposed to sunlight. Selective masking results in tasty tattooed fruit that make great desktop offerings to your favorite tech teacher. 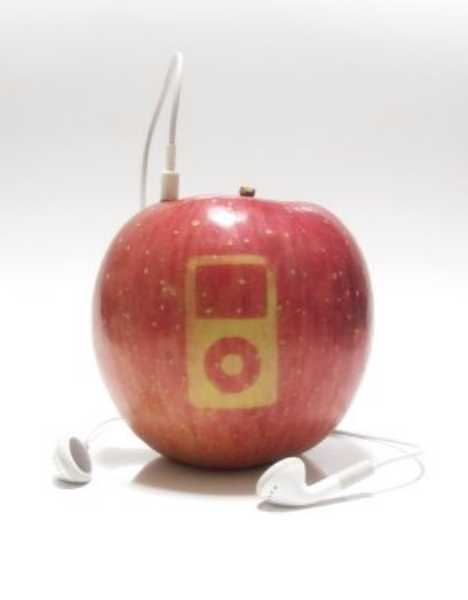 The next best thing to an Apple iPod is an iPod apple… well, sort of. Though it’s rather useless as a music player it can come in quite handy should you get the munchies. 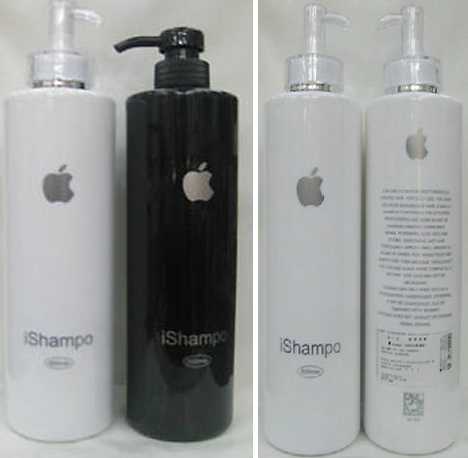 Trying hard or hardly trying? After applying the time, money and risk inherent in any new business venture, the originators of “iShampo” went and shot themselves in the foot by leaving off the final “o”. Then again, their assumed market is a non-English-speaking country who likely will only recognize the non-tectural logo. Anyway, let’s enjoy smug white iShampo shampoo and technical black iShampo conditioner! 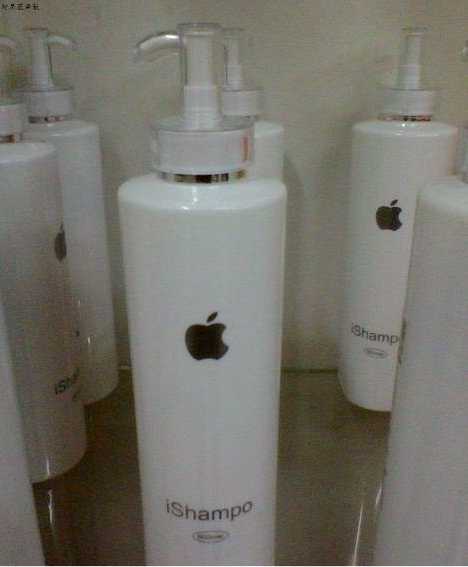 (image via: Ministry of Tofu)

Claiming to be an officially licensed Apple product is one thing, having an officially approved Apple aroma is another… and just what would an actual Apple Shampo, er, Shampoo smell like? Apples? Too obvious. Perhaps, as a netizen commenter suggests, it “smells daintedly of sugared oranges with a whiff of cut grass and a sprig of winterberry”. 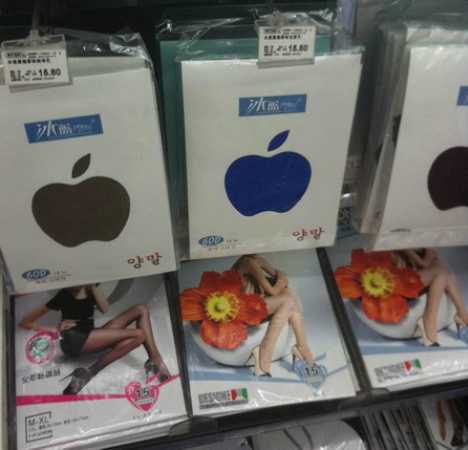 What can be said about Apple Pantyhose besides the fact that it’s made and sold in South Korea? Well, it comes in brown or blue, for one thing, and… blue pantyhose?? Anyway, once they’re out of the package their Apple brand marketing mystique instantly fades, though one way to get it back is to wear them on your head while robbing an Apple Store. 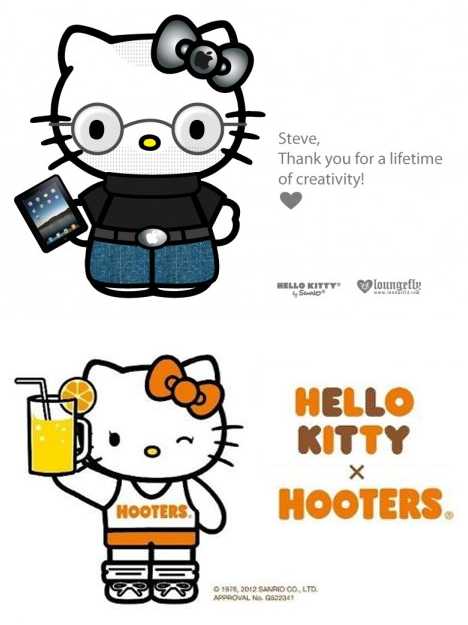 We have to assume Sanrio got the official OK from Apple Inc to use their brand trademarks in this well-intentioned tribute to the late Steve Jobs but that still doesn’t make it right. Then again, Sanrio also pimped out Hello Kitty to Hooters so nothing is sacred it seems. 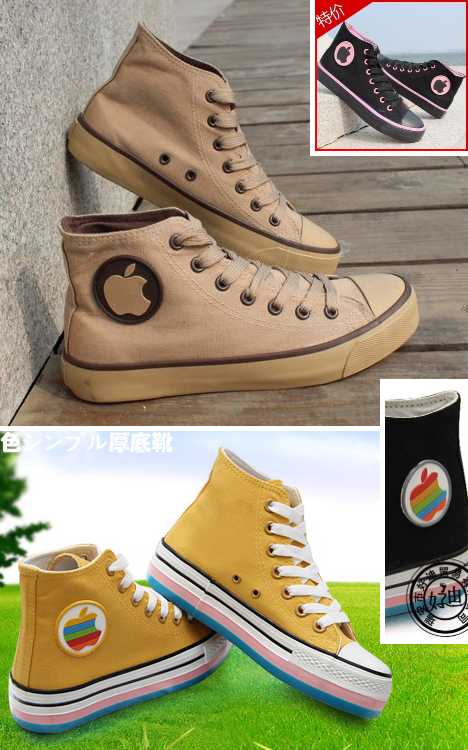 (images via: Fanbuxie and LOVE)

When you’re a shoe manufacturer whose main influences are Converse All-Stars and Apple products, and your customer base feels similarly, the result is a wide range of high-top sneakers proudly displaying the classic and current Apple logo. Best feature? They run without needing batteries. 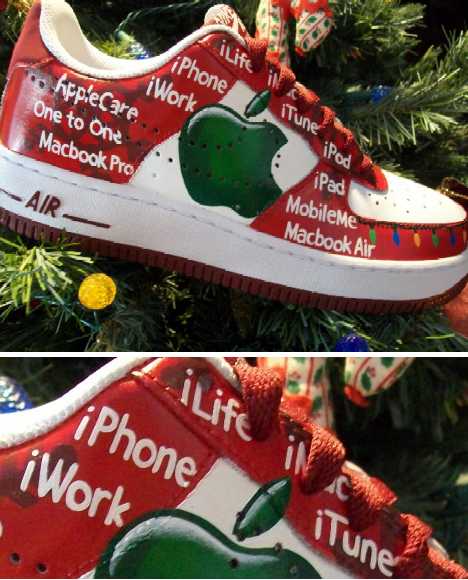 Naughty or nice? These custom shoes are one-off models made per order for an Apple employee, who obviously doesn’t work in the company’s legal department. Check out the string of Christmas lights encircling the toe, wouldn’t it be cool if they actually lit up? Perhaps there’s an app for that. 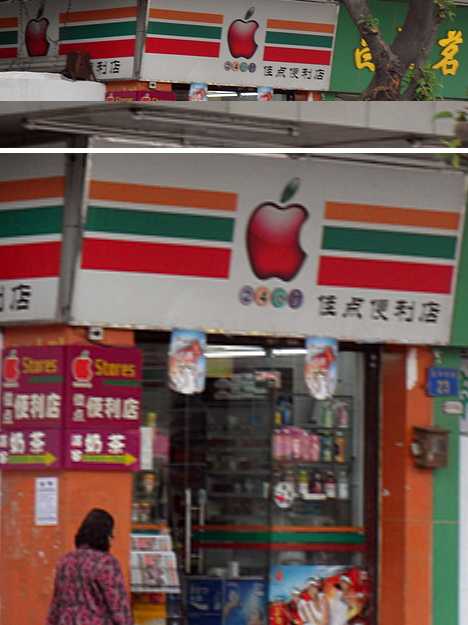 If you’re looking for an Apple iPhone 7-11, get your apps to Guangzhou, China but prepare to be disappointed. The store supposedly does NOT sell real or imitation iPhones, and odds are you can’t get Big Gulps, Slurpees or apples there either. You CAN get sued, however, if you’re the store owner. 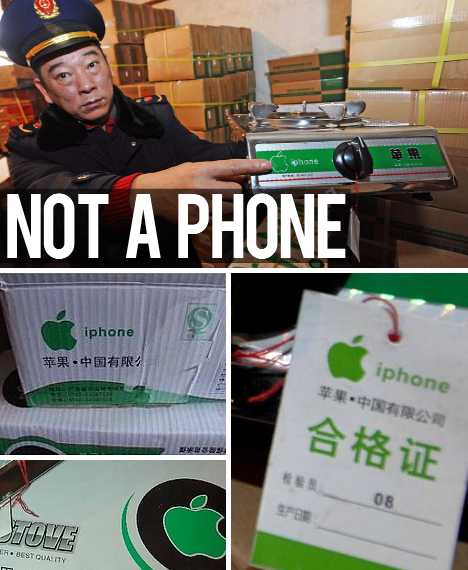 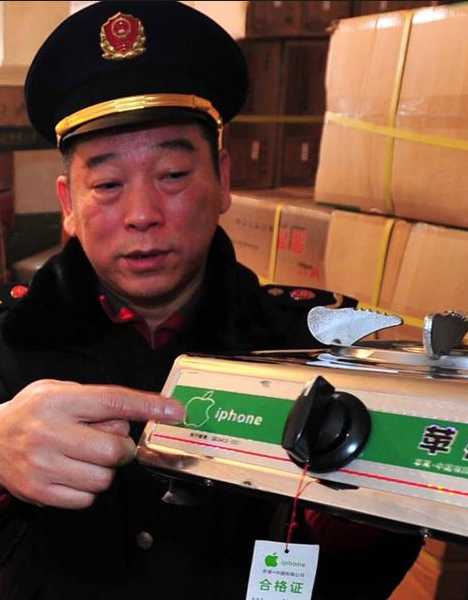 Isn’t it great to know China’s law enforcement authorities are finally getting serious about copyright infringement? It would be if they were, but these stoves were impounded because their safety switches were defective. That’s some darned fine police work there, Lu. 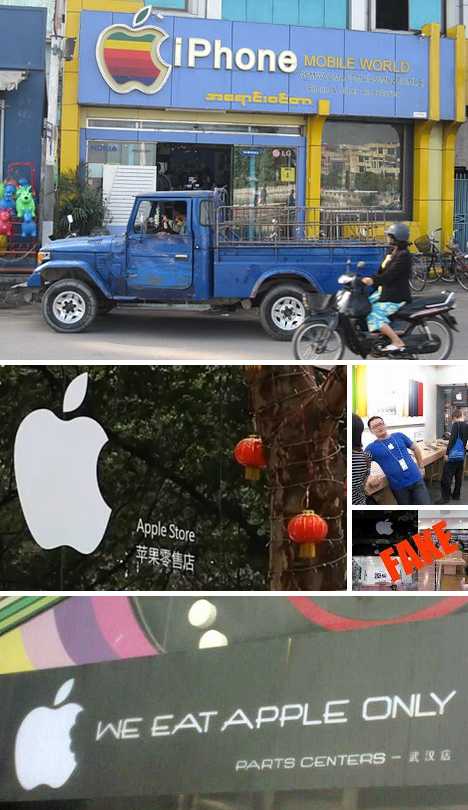 Laws affecting intellectual property may be weak throughout much of East Asia but the law of supply and demand has never been stronger. Take China’s imitation Apple Stores, near-perfect copies of Apple’s signature stores right down to the t-shirts and ID tags worn by the employees. Not all Chinese cities have official Apple Stores so local entrepreneurs step in to fill the gap. Ditto for Myanmar, where a snazzy pseudo-Apple Store brightens up a street in Mandalay (top). 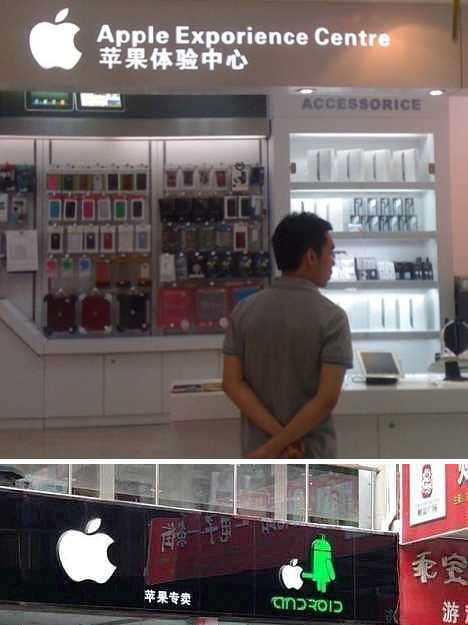 For every letter-perfect imitation Apple Store there are probably two, three or more imperfect ones such as those above. Business, one might say, really sucks. 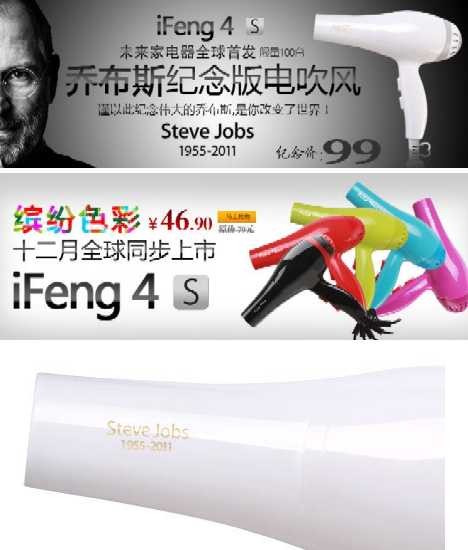 (images via: Dumaujvaros and Cult of Mac)

From suck to blow: it’s the iFeng 4S, a ballsy tribute to a guy who probably hadn’t used a hair dryer in years. The 900-watt “tribute edition” dryer is limited to just 99 copies, and if you believe that then the Chinese online seller probably has an iBrooklynBridge you might be interested in as well. 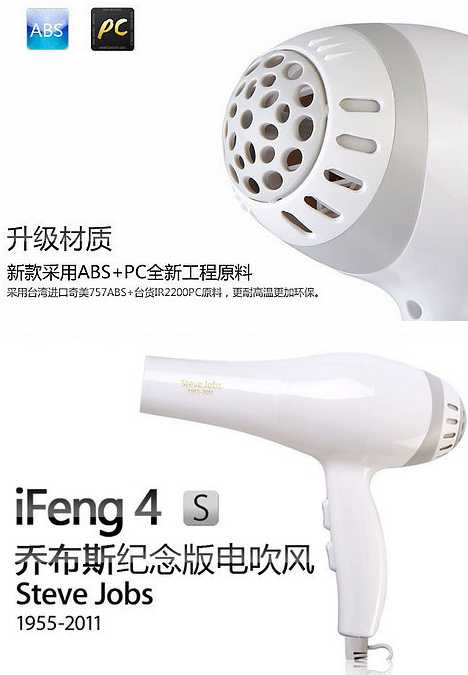 (images via: Dumaujvaros and Cult of Mac)

The iFeng 4S (“Feng” is Chinese for “Wind”) appears to be made from ABS and PC, the latter being the only off note the chunk dryer plays. Why use its snout to memorialize Steve Jobs, though? We have to assume the company owner is an Apple fanboy hit hard by Jobs’ passing. He had the chance to express his feelings in a uniquely personal yet public manner and he did exactly that. 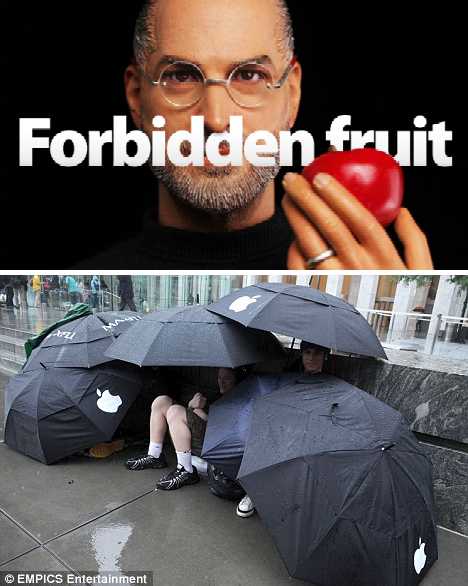 Call it a perfect storm of brand envy, marketing desperation and creative bankruptcy, resulting in logo hijacking on an unprecedented scale. You’d think consumers regardless of first, second or third world residency would know better and maybe they do, but simply don’t care – the power of the Bitten Apple transcends the quality and relevancy of the item it’s stuck on.