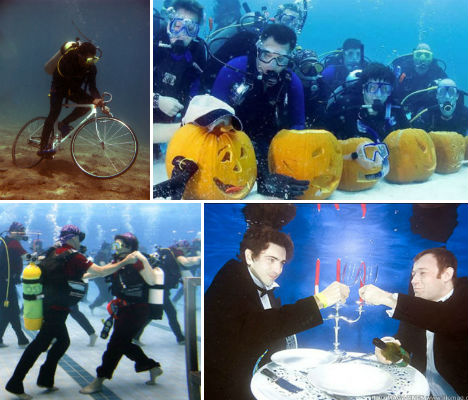 Swimming? Gazing at pretty marine life? That’s boring – compared to the bizarre and amazing things that some adventurous divers choose to do underwater. Why simply scuba dive when you could be ball dancing, playing a musical instrument, putting on a fashion show, carving a pumpkin, swallowing a sword or enjoying a fine meal? These 15 events and gatherings draw hundreds of people to the bottoms of pools and the ocean floor for strange submerged activities. 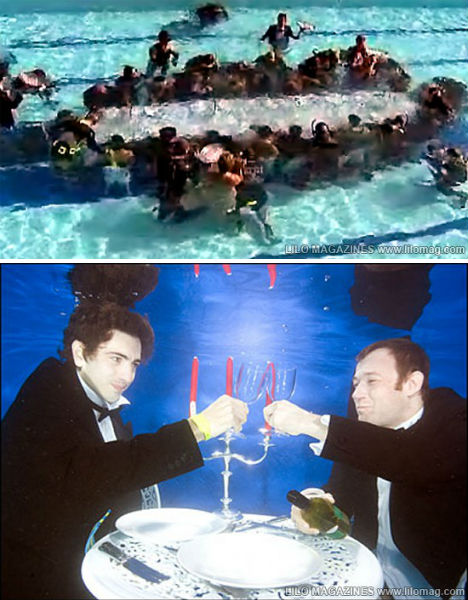 500 people set the Guinness World Record for the largest underwater dinner party in 2010, enjoying a meal of smoked salmon, vegetables and toffee apple while decked out in formal finery. The event took place at the swimming pool of the Park Club in west London, and the food was prepared in jelly to keep it from disintegrating in the water. Each bite was quite a process: guests had to remove their aqua lungs from their mouths, slip in the food, replace the aqua lung and press a button that purges water so they could breathe and swallow. 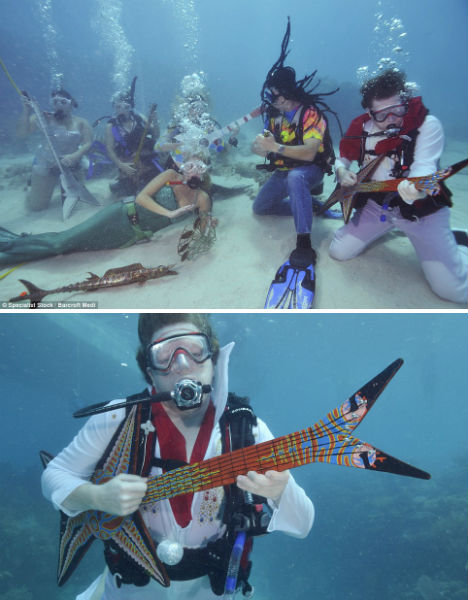 Musical instruments shaped like stingrays, starfish and sharks – not to mention over 500 divers and snorkelers – made their way to the bottom of the ocean for the 27th annual Underwater Music Festivals in the Florida Keys last summer, and in July 2012, they’re set to do it again. The event, which takes place beside America’s only living coral barrier reef, celebrates the marine life that the reef supports. 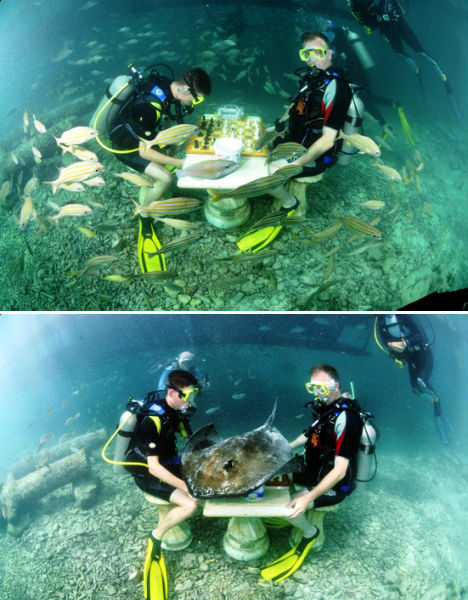 (images via: live in curacao)

Underwater chess is actually a thing. Not only is it an annual event in Curacao, where master chess players engage in tournaments on the sea floor, but chess enthusiasts sometimes even set up their boards in swimming pools. The 2008 event in Curacao was nearly derailed by a curious stingray. 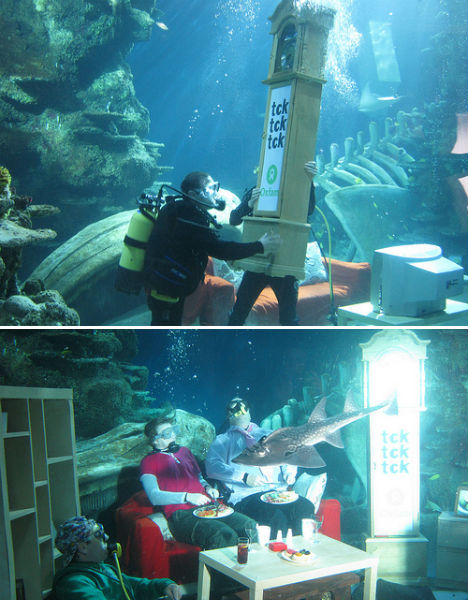 Rising sea levels caused by global warming could mean that many coastal cities will be underwater within decades. To call attention to this troubling fact and mark the 100-day countdown to the Copenhagen Climate Change Conference in 2009, Oxfam International organized an unusual display at the Sea Life Aquarium in London. An ‘average family’ sat in a submerged living room next to a ticking clock that served as a reminder of how little time we may have left. 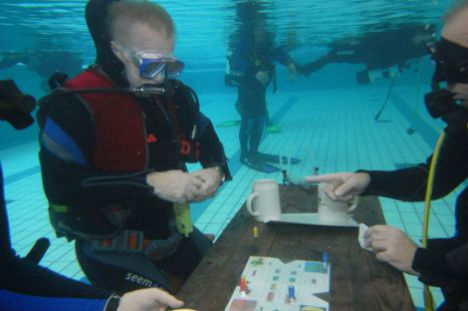 Scuba divers played a card game underwater for 36 hours straight in a bid to set a world record. The 16 divers worked in shifts so they could change oxygen tanks. 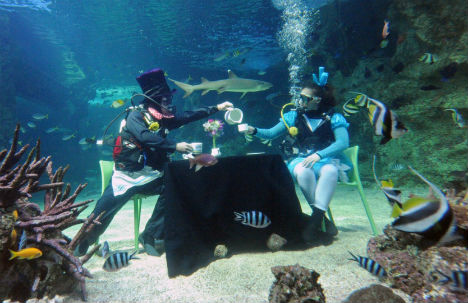 The Mad Hatter’s tea party got that much more chaotic when a pair of divers took to the floor of the Great Barrier Reef Oceanarium at the Sydney Aquarium in May 2012. The event was part of a fundraising drive called Australia’s Biggest Morning Tea, which supports cancer research. Another underwater tea party was organized at England’s Deep Aquarium in Hull to celebrate its 10th birthday. 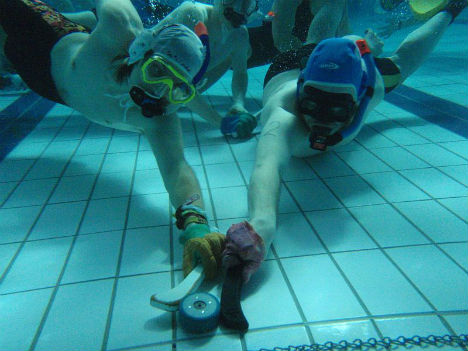 Underwater hockey isn’t just an occasional stunt that people pull for photo ops – it’s an actual sport of its own. Of course, it’s not exactly spectator-friendly, but that’s not really the point. Players strap on their masks, snorkels and fins and use sticks to shoot pucks into goals, just like the land-based version of the sport, but there’s no contact involved. 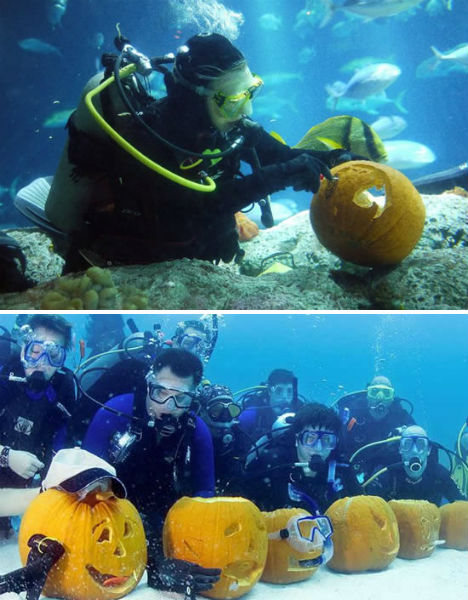 Why carve pumpkins underwater? When you’re a diving enthusiast, it just makes Halloween that much more fun. Competitions are held every year all over the United States including Florida, South Carolina and Nevada. Contestants take their pumpkins about 30 feet under the surface and compete against each other to carve the most impressive jack o’lantern – no easy task, considering that pumpkins are buoyant until you get them hollowed out. 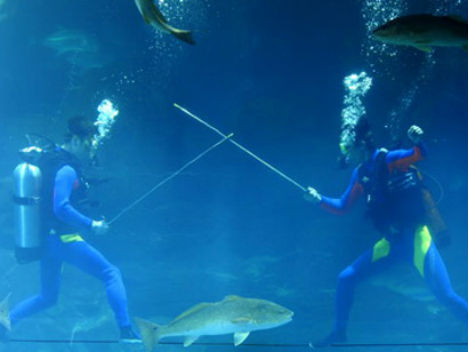 Underwater World in Qingdao City, China held ‘Underwater Olympics’ in 2010 to mark the Chinese New Year. The events included fencing, shooting, cycling and gymnastics. Fencing competitors had to fight while balanced on a steel cable. 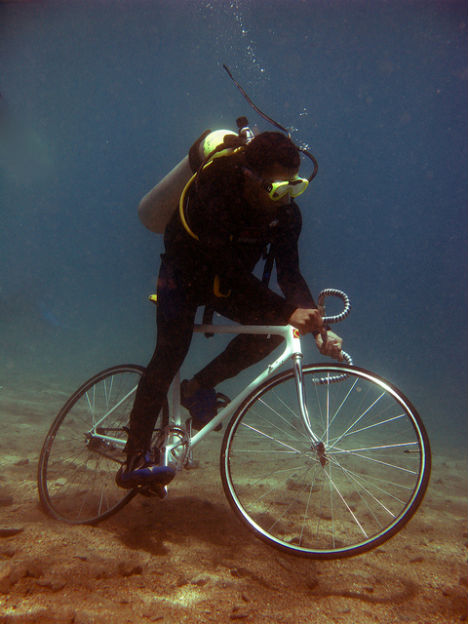 An Egyptian cyclist named Yasser brought his bicycle underwater and attempted to ride it along the ocean floor, with mixed results. Yasser wore his normal diving equipment and biking shoes, fighting to keep the bike from simply floating up. Yasser says, “The overall experience was so great. I enjoy diving in general, but having alien objects with you makes it more interesting.” 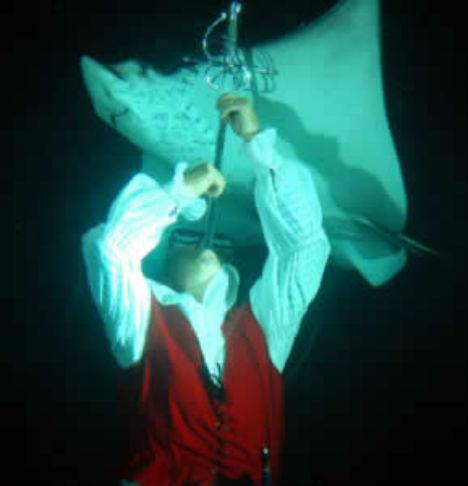 Sword swallower Dan Meyer became the first person in America to swallow a solid steel sword while underwater – in a tank of live sharks and stingrays – in 2007. The stunt took place at Ripley’s Aquarium in Myrtle Beach, South Carolina, and needless to say, it was a bit dangerous. The event was part of the aquarium’s “Pirates, Predators of the Sea” exhibit. Meyer swallowed a 30-inch-long sword while submerged 15 feet underwater with more than 80 sharks and stingrays swimming all around him. He wasn’t oblivious to the risks, of course – Meyer has previously been hospitalized with a punctured stomach after swallowing five swords at once. 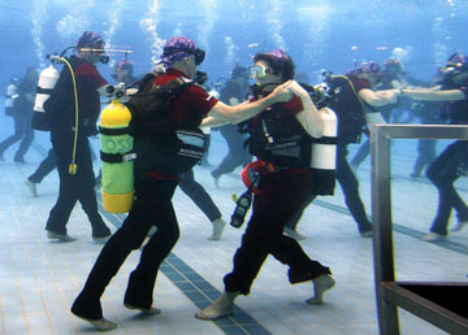 Seventy-four scuba divers danced gracefully – if slowly – in a bid to set the world record for an underwater dance class at Sydney’s Olympic Park Aquatic Center in 2006. Divers strapped on scuba gear and danced simultaneously for ten minutes on the bottom of the pool. 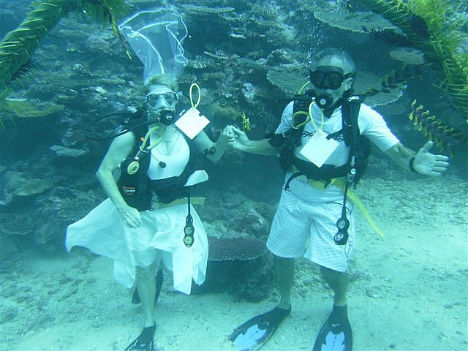 Once a contender for the weirdest location to get married, underwater weddings have grown a lot more popular over the years as water-loving couples choose to garble “I do” into their scuba mouthpieces. The Guinness World Record was set in June 2010 when 261 divers took part in a marriage ceremony off the coast of Italy.

Underwater Tennis (With a Shark) 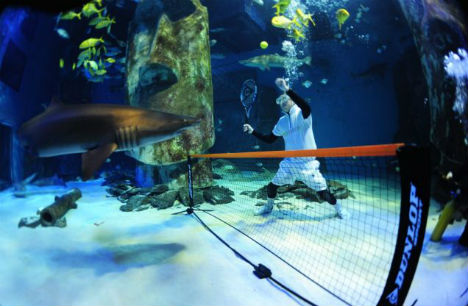 Sports brand Dunlop set a man versus shark tennis match on the bottom of the London Aquarium to show off its biomimetic tennis range, including an Aeroskin racket inspired by sharkskin.