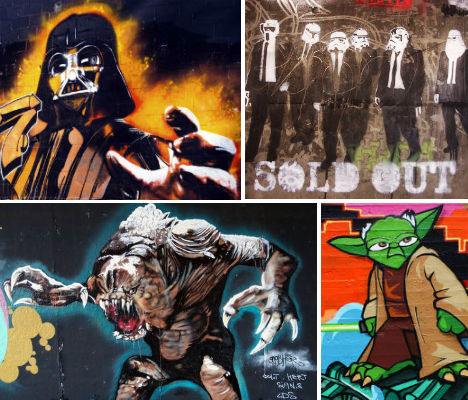 A generation of artists who grew up on Star Wars is now decorating tunnels, alleys and other urban surfaces with Darth Vader, Yoda, Han Solo and the rest of the gang in works of graffiti art that range from funny stencils to jaw-dropping, detailed murals. Here are 24 (more!) examples of Star Wars-themed street art. 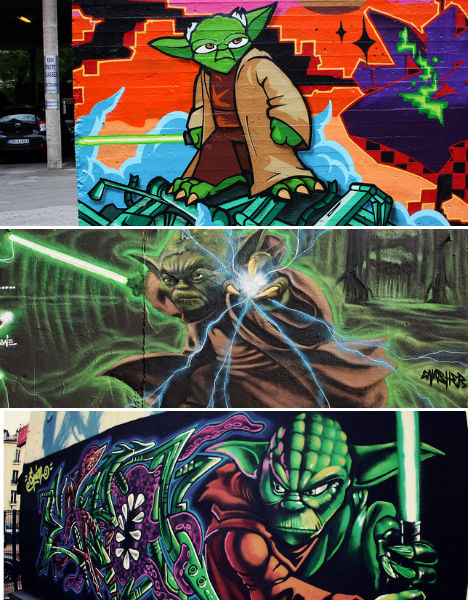 Yoda gets both a stylized, cartoonish reinterpretation and a more faithful rendering in these three incredible works of street art. The top one can be found in Oslo, Norway; the middle work is by UK-based artist Gnasher, part of the LDS crew.  French artist Sebastien Bertrand painted the third in Montreuil-sous-Bois, Ile-de-France. 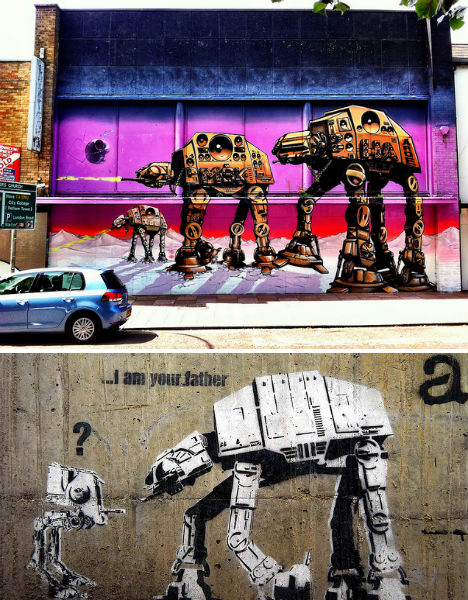 Norway-based street artist Dolk stenciled the ‘I am your father’ AT-AT work on a wall in Melbourne, Australia. AT-AT walkers have also taken over the side of a building in Brighton, England; AROE MSK/Heavy Artillery call it ‘The MSK, HA, TSL Declaration of War.’ 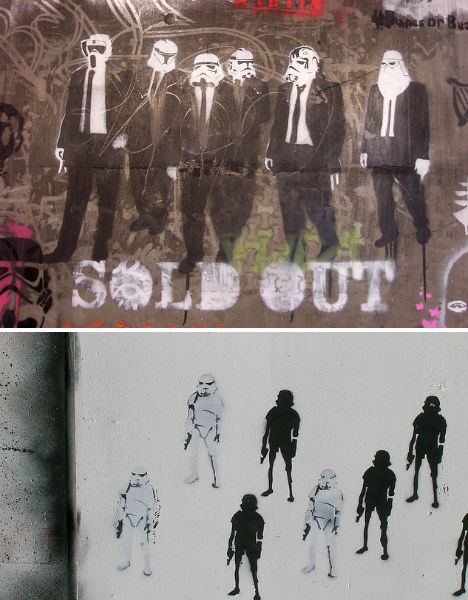 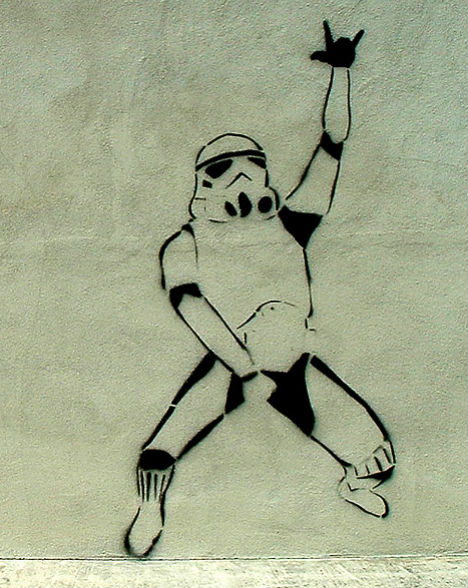 Stormtroopers get the Reservoir Dogs treatment in a stencil spotted on Leake Street in Waterloo, London;  a series of stormtroopers and their silhouettes decorate the wall of Waitangi Park in Wellington, New Zealand; a life-size stormtrooper gets down in San Antonio, Texas. 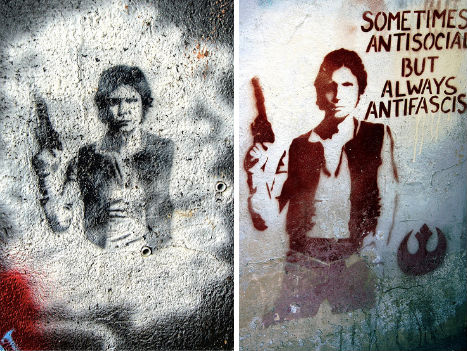 Han Solo appears out of the haze in Ann Arbor, Michigan, and makes a political statement in Krakow, Poland. 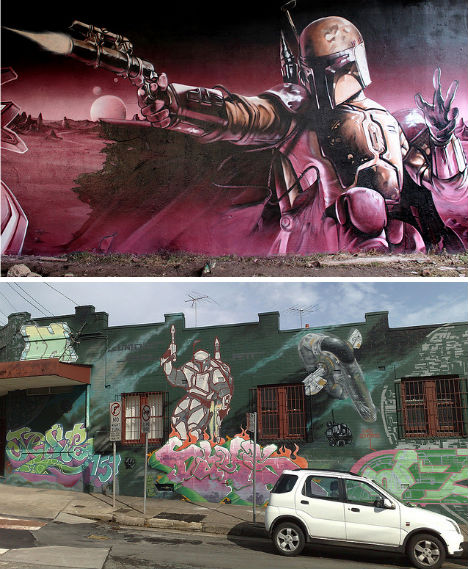 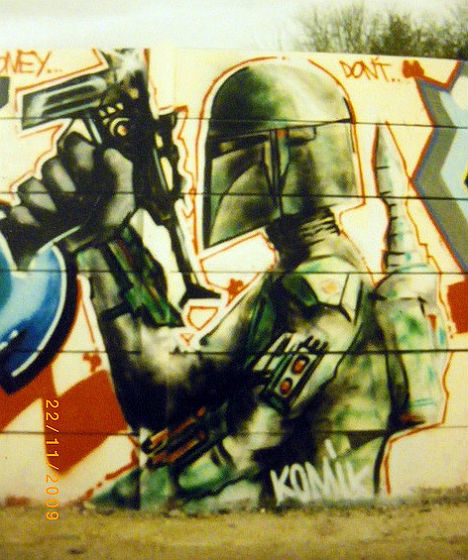 Graffiti artist SmugOne is responsible for the top mural of Boba Fett in a Scotland tunnel, even more impressive considering it was about 13 degrees Fahrenheit when he painted it.  The second mural was captured on the wall of a laundromat in Sydney, Australia. Artist Komicaura Aurakomic writes of the bottom image, “This one was free-styled from memory.” 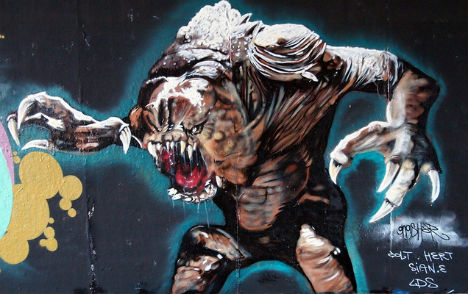 David Nash, aka Gnasher, makes this rancor look even more vivid and frightening than usual with strong highlights and saliva dripping from its teeth. 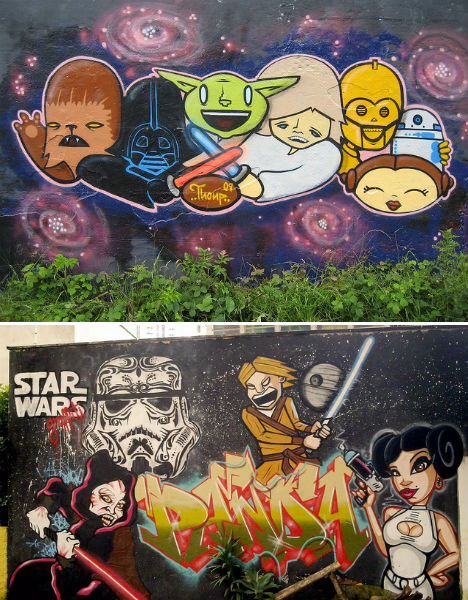 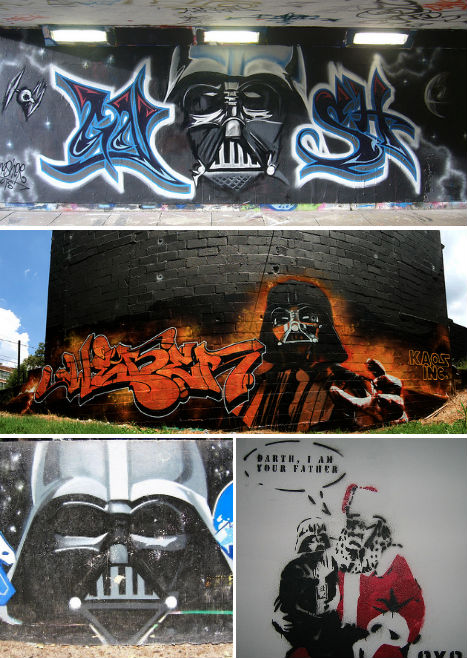 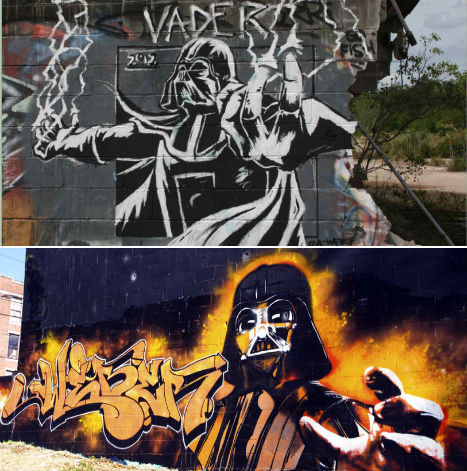 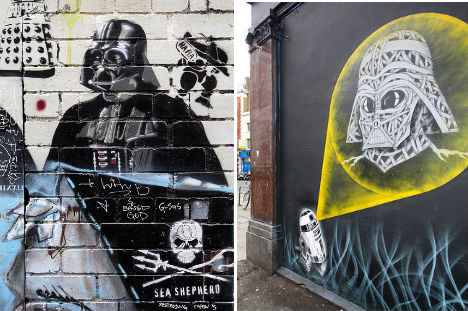 Is it any surprise that Darth Vader is the most popular Star Wars character to grace urban surfaces all over the world? He’s been interpreted in hundreds of different ways, large and small, bright and monochromatic, menacing and humorous.