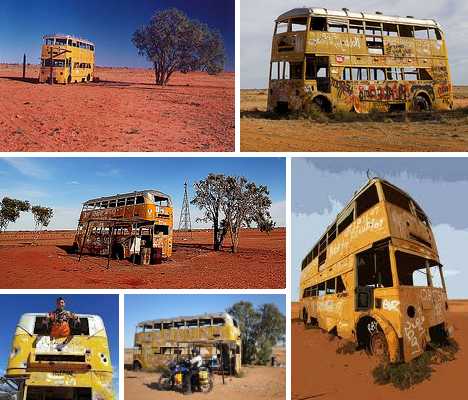 Think your daily dose of public transit is commuter hell? Try taking a double-decker bus for a Sunday drive in the Australian Outback, Jack! You don’t have to be Crocodile Dundee to know that’s one trip that WILL end in tears and WON’T end back at your starting point. It’s been tried, as this mellow, yellow, slowly rusting relic of 1950s Sydney now standing out back in the sands of the Outback so beautifully illustrates. 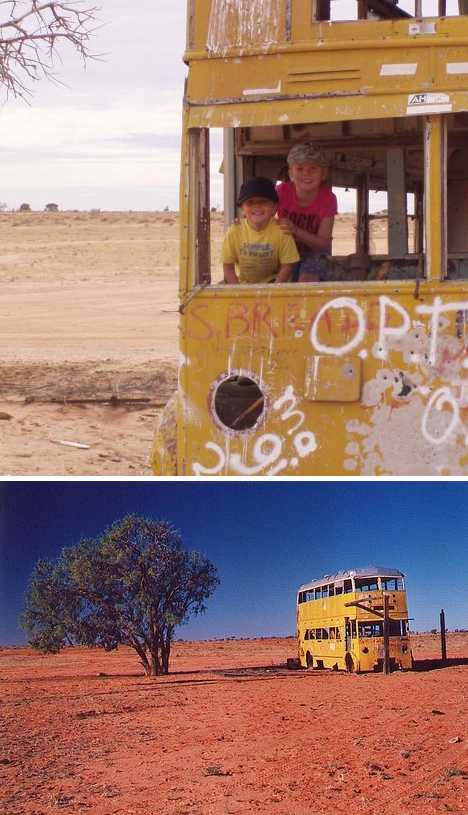 Permanently parked in Australia’s inhospitable Strzelecki desert, just off the road near Cameron Corner stands one of the most incongruous objects you’ll ever see: a cheery though weary yellow 1952 Leyland double-decker bus – or to be precise, the abandoned remnants thereof. 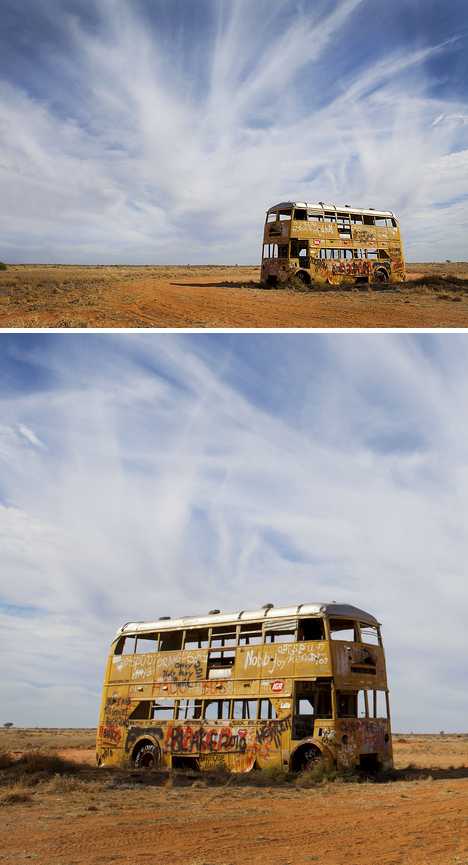 Time hasn’t been kind to this former commuter-carrier that, in a previous life decades ago, trundled through the peaceful, tree-lined streets of Sydney and Newcastle along with dozens of its ilk. Then again, time works in strange ways out in the outback, preserving some things well beyond what might be expected while accelerating disintegration in others. 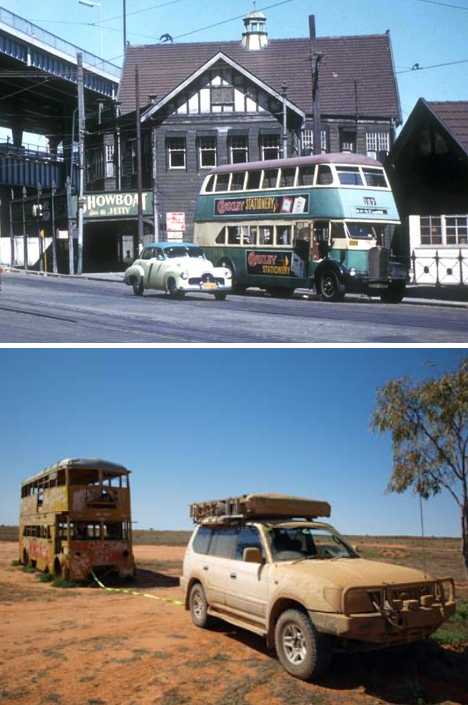 But back to the busted bus… how did a veddy-British “London Bus” end up all alone at the end of the Earth, antipodean-style? The answer lies entombed in Australia’s history and that of Sydney in particular. According to the Powerhouse Museum in Sydney, “about 2,000 mechanically powered double deck buses have operated in Australia since 1905.” The last one was withdrawn from service in May of 1986 as new, more-reliable, articulated “bendy” buses were introduced. 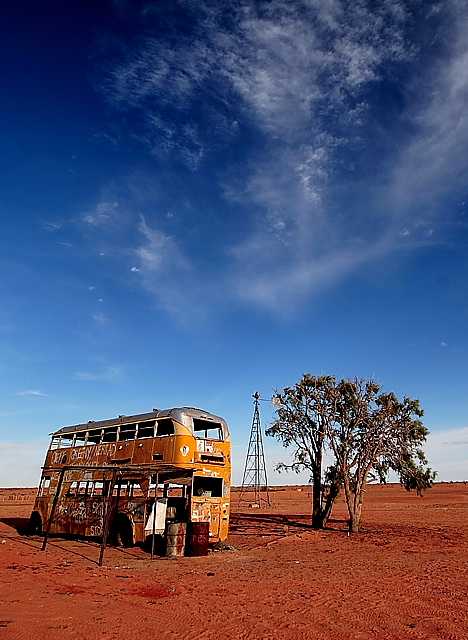 New South Wales is world’s apart from the blistering deserted desert of Australia’s “Red Center” but if one wishes to get away from Sydney’s rat race, the only choices are into the Outback or out to the ocean. Obviously, inland is the way to go but getting there is half the fun and by “half the fun” we mean “all the fun”: when the bus eventually, inevitably stops, so does the fun. 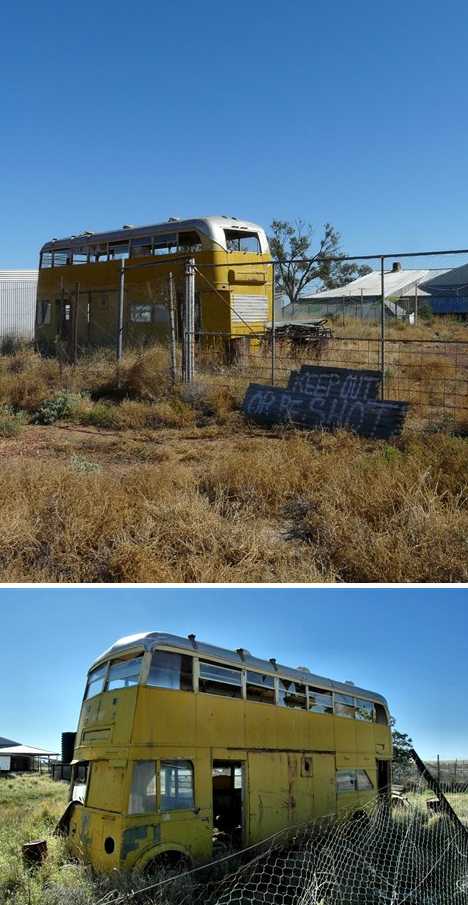 (images via: ExplorOZ and DPReview)

You’d think there’d only be one dummy dumb enough to drive a double-decker bus into the hotter, dryer, ever more isolated Australian Outback but that would give down-under dummies too much credit. Indeed, there’s an identical, yellow, abandoned double-decker bus moldering away behind the Betoota Hotel between Windorah and Birdsville. 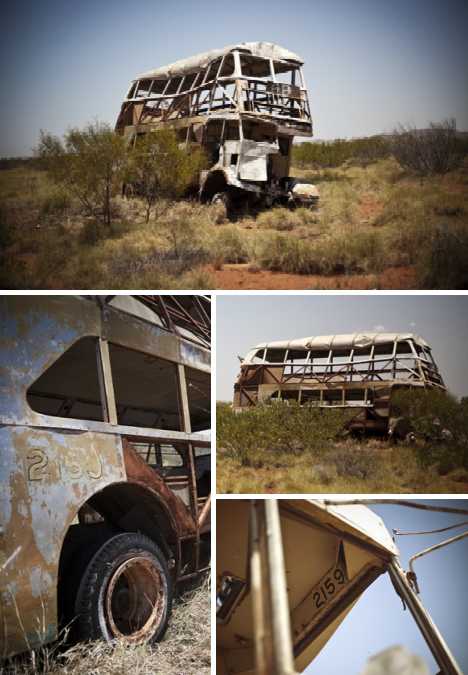 Yet another abandoned double-decker bus stands within shouting distance of the main (OK, only) road from Karratha to Port Hedland near the northwest Australian coast. This ragged survivor of the transit wars now fights a losing battle between gritty desert winds and salty sea breezes yet still proudly bears patches of pale blue paint and the number 2159. 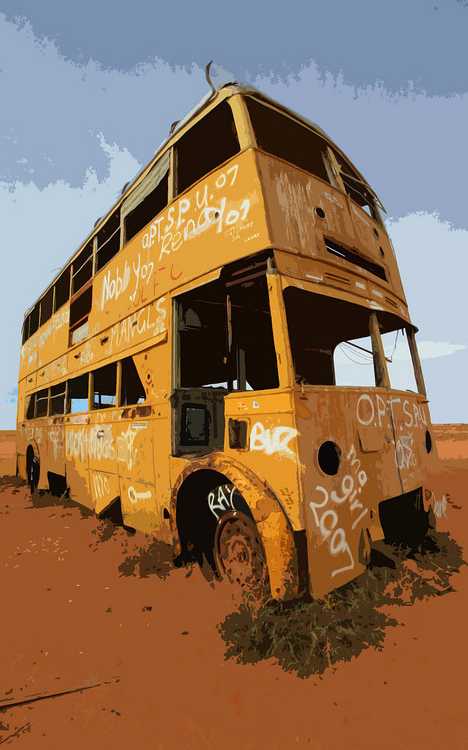 One abandoned double-decker bus to an article, however, and we’re focusing on the bare beauty beached in the shifting sands of Cameron Corner. The “corner” refers to the junction of the Australian states of Queensland, South Australia, and New South Wales. It’s located about 1,400 km (870 mi) west of Brisbane and approximately the same distance west-northwest of Sydney. That a clapped-out double-decker bus whose best days were long past could have managed to travel that far over mainly miserable roads is a miracle in itself. 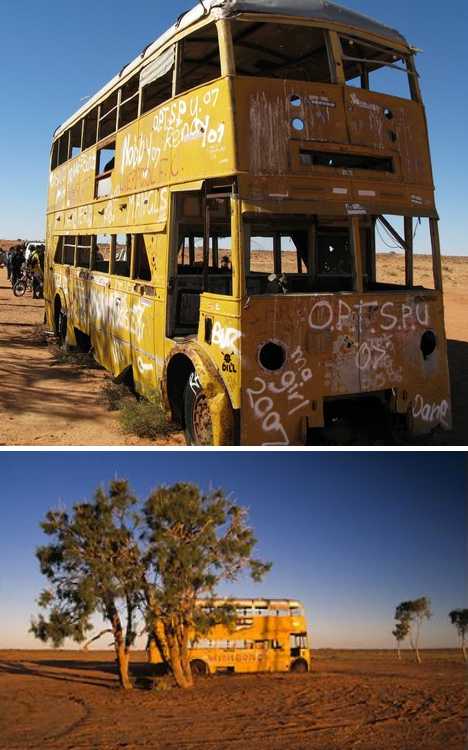 (images via: Through My Kitchen Window and Cafe Press)

Miracle or not, there it stands amidst a copse of struggling trees just off a much-beaten path (actually the Lyndon Station track). It’s not certain which came first, the bus or the trees, but word has it the bus was used as a temporary out-camp for cattle workers who called it “Jack Camp”. Anything to get out of the blazing Outback sun, son! 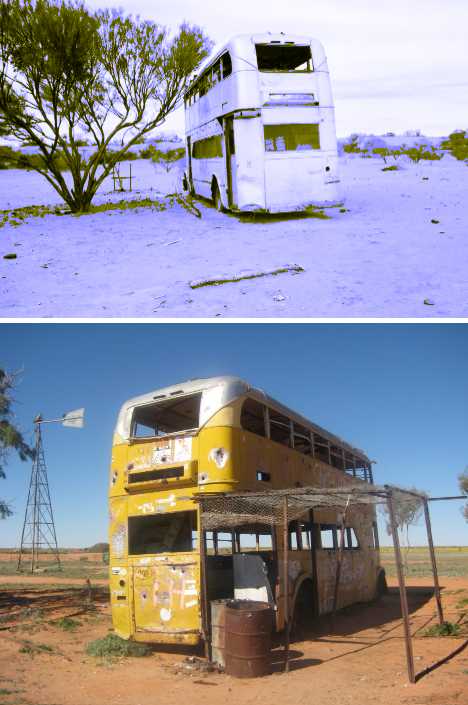 The bus is better known as the living space and home base of Australian artist Joshua Yeldham. Born in 1970, Yeldham set out one day in the early 1990s in his VW Combi van, searching for inspiration along the sprawling Dingo Fence. By chance, his van happened to break down near Cameron Corner and as a Kombi doesn’t offer much living space, Yeldham co-opted the empty bus: he ended up staying there 6 years. 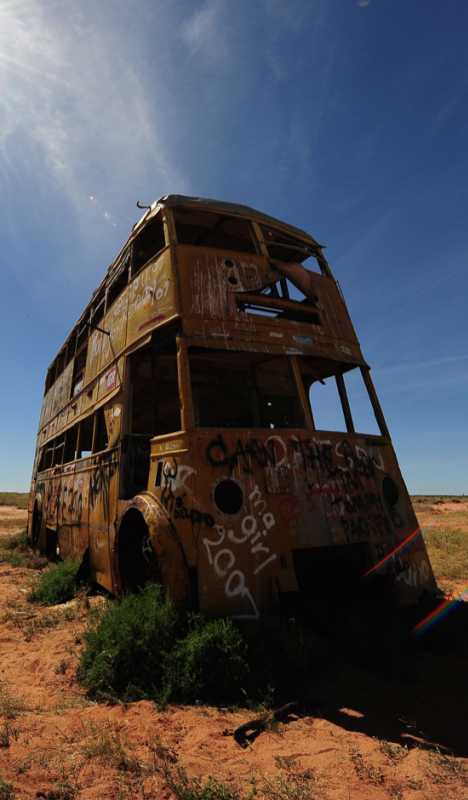 Alone with the ghosts of bus-riders past and emboldened by the spirit of Eliza Kennedy, whose grave lies nearby, Yeldham enjoyed one of his richest artistic periods. A book of his paintings entitled “Solitude’s Bride,” possibly after Eliza, was published after Yeldham and his career moved on. The epitaph on Eliza’s tombstone reads “Her charity covereth a multitude of sins,” which certainly says much in just a few words. 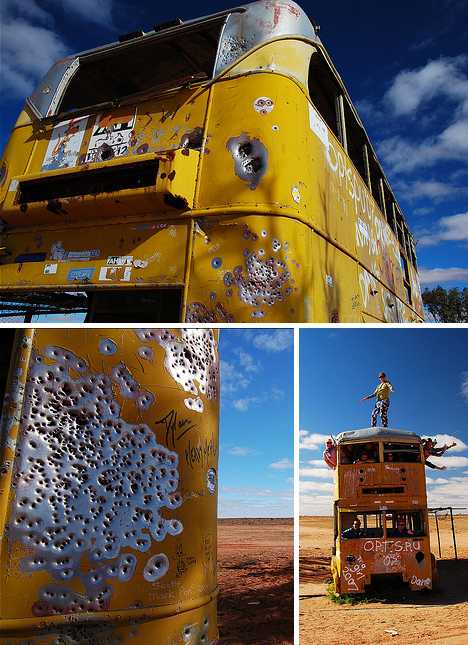 The abandoned bus also attracts artists of a different sort: photographers. Australian native Dirk Spennemann is one of many who’ve been entranced by the Cameron Corner double-decker but one of only a few who’ve creatively captured its essence for the ages on film. 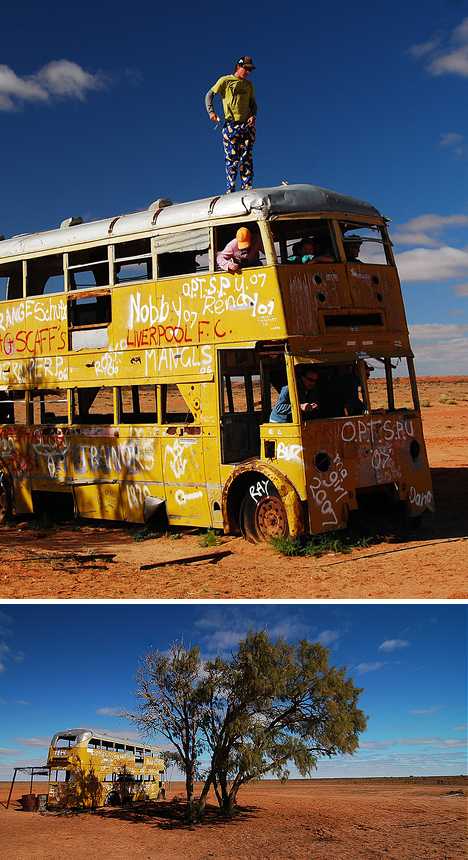 Spennemann’s strikingly ethereal images, several of which are showcased above, do justice while paying homage to the rare set of circumstances that have taken this bus where no bus has gone before. 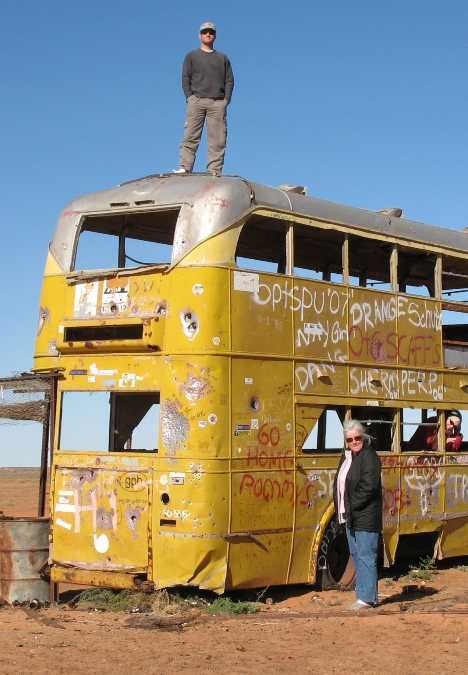 As for the Cameron Corner bus, its remains remain in situ long after the cattlemen and creative types have come and gone. Passersby do occasionally leaves their marks, however, though the practice is frowned upon. Take Ken Duncan, a defender of culture who “prepares to wage war on a growing threat to the pristine nature of our precious outback icons: idiots with spray cans.” 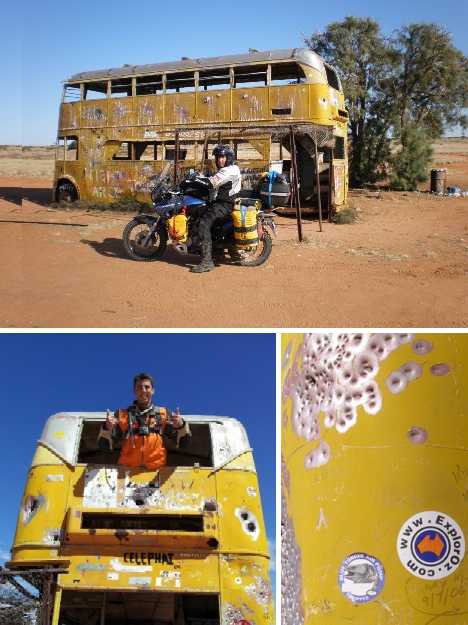 (images via: Adventure Rider, The Great Australian Ride and ExplorOZ)

“Talk about the last bus stop,” relates Duncan. “When I first saw it, there was no graffiti – but over the years dipsticks have felt the need to add their names. While standing there recently, ready to take a new photo of the bus, I was pondering the worst of the fresh graffiti, a scrawled name: “Wishbone”. I was thinking, “What would possess someone to do that?”” 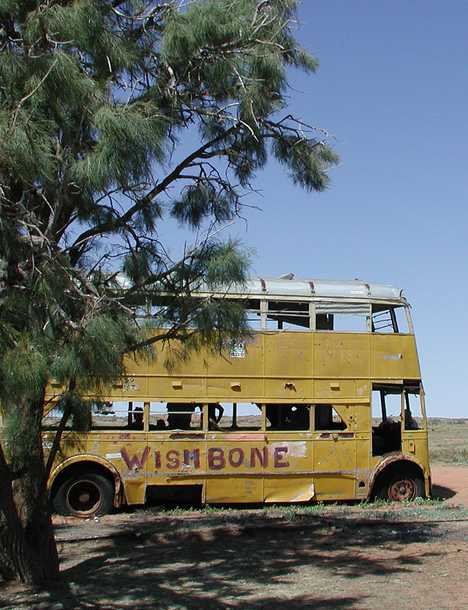 “And guess what? I got my answer. At that very moment, a guy pulled up in his Ute with the big aerials, driving lights, bull bar and fluffy dice on the rear-view mirror, and jumped out with his girlfriend. He headed over to the bus and said proudly, “Look, darling, there’s my name. Wishbone. I did that – isn’t it great?” His girlfriend just giggled nervously, not really knowing what to say. They were both right near me and I overheard this profound dialogue. I couldn’t believe I had actually now met the owner of the graffiti.” 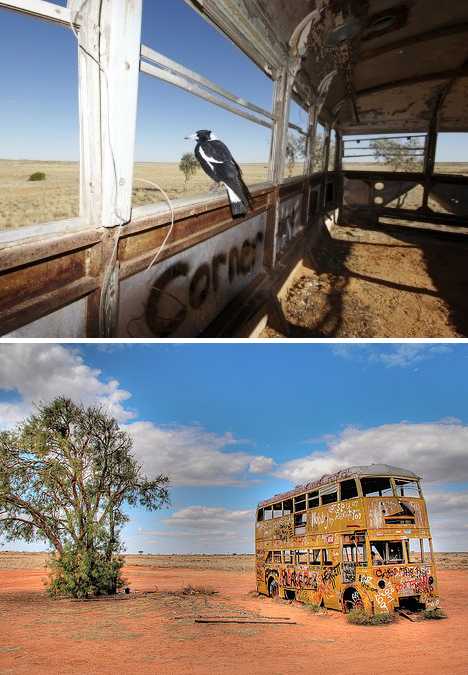 (images via: WorldNomads and KCpics73)

“Wishbone looked over at me, clearly so proud of his ability to spell his name, and announced once more, “That’s me,” awaiting my approval. I like to be as friendly as I can, but I just looked at him and said: “If you did that, then you are a dipstick. Why did you do it?” The poor fellow just looked at me with a vacant stare – obviously not the sharpest tool in the shed.” 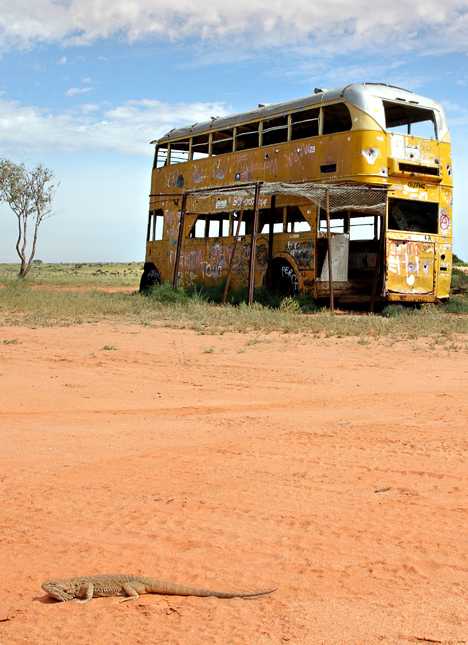 Sixty years after it rolled off the factory production line, chrome gleaming and exuding the aroma of New Bus Smell, this solitary people-mover now silently observes the overhead transit of sun, moon and stars. As a man-made consumer product its life has been unusually long and curiously eventful but the spirits of the Outback simply smile and wait their due. Weathered by the elements and vandalized by the Wishbones of the world, the bus is doomed to deteriorate into rust and become part of the Outback’s relentlessly scouring red sands. Sic transit gloria indeed.