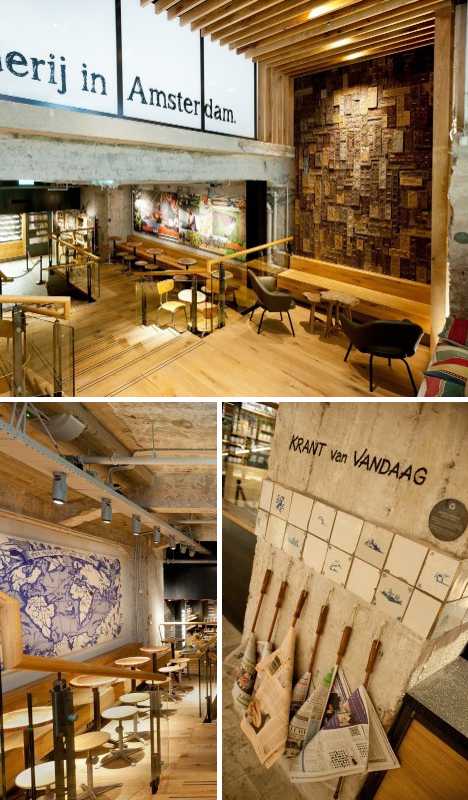 Housed inside a former bank in Amsterdam, the Netherlands, this cool concept Starbucks just HAD to be an architectural knockout: one doesn’t compete lightly when locating a coffeehouse in Amsterdam, after all. Tradition aside, Starbucks was faced with the problem of how to fill a 1,400 square foot former bank vault and give it the warm & cozy ambiance coffeehouse customers demand. 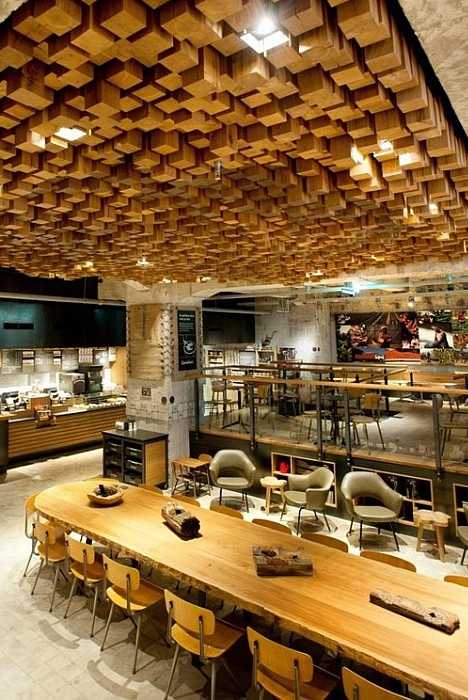 The store’s design was guided by a hand-picked team led by Dutch-born Concept Design Director Liz Muller, who in turn drafted local artists instructed to use indigenous materials including re-purposed Dutch oak and aged blue & white Delftware tiles. The finishing touch was an undulating ceiling relief formed from 1,876 stained and hand-cut wood blocks which form the face of the iconic Starbucks Siren.

One Night in Bangkok 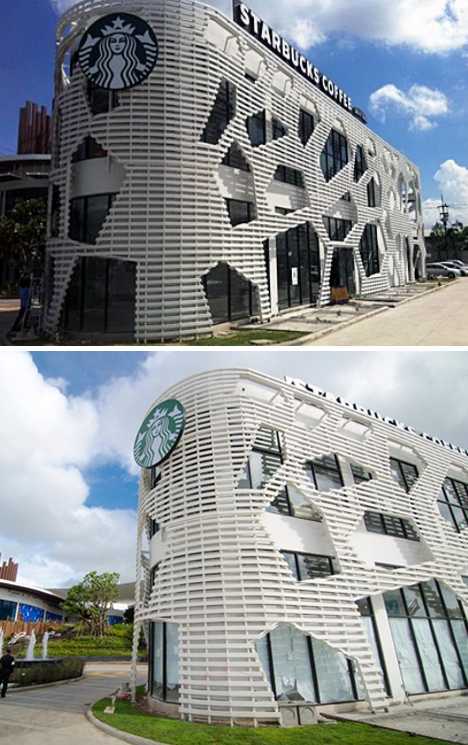 (images via: Inside Retail Asia and Singha Square)

Local culture isn’t all traditional, as nations around the world express themselves through modernist design. Take the new Starbucks drive-through concept store at Porto Chino in Bangkok. 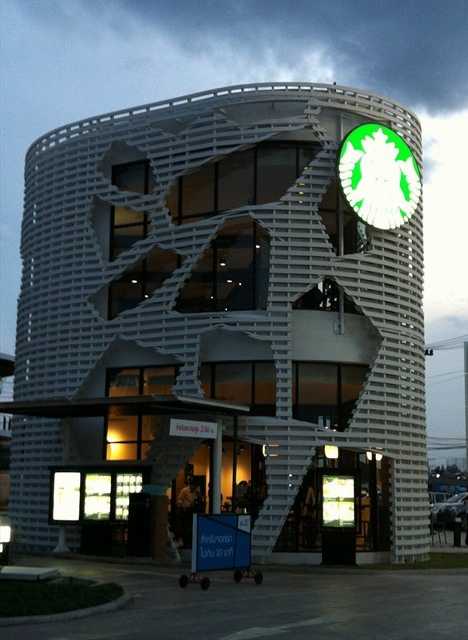 The Porto Chino Starbucks is distinctive without being distracting and as the chain’s sales in Thailand are growing at an annual 20% clip they must be doing something right! Expect to see another 10 to 15 new Starbucks stores opening in the southeast Asian country by the end of this year, bringing the total to over 150. 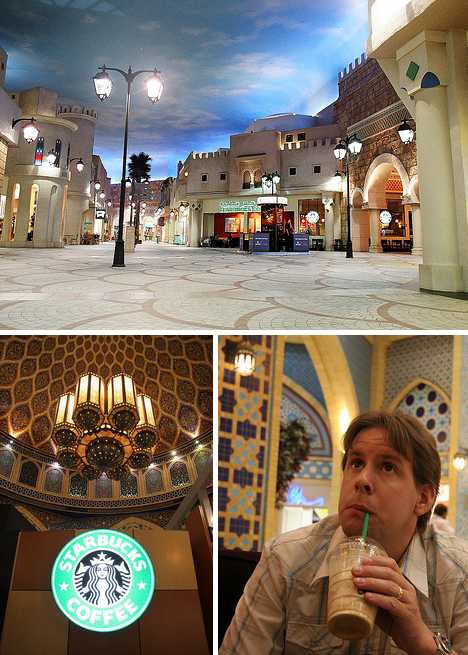 Dubai has a well-earned reputation for over-the-top architectural excess but the comparatively smaller and more intimate Ibn Battuta Mall exhibits admirable restraint – money well spent, in other words. The mall’s 6 main pavilions are named for countries visited by legendary 14th century traveler Ibn Battuta and inside the Persia Court you’ll find a Starbucks that would knock any medieval Shah right out of his socks. 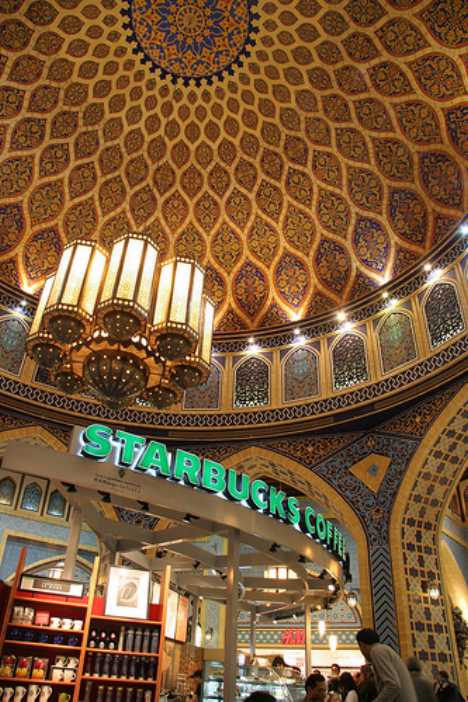 The Starbucks kiosk is prominently placed within a jaw-dropping replica of the Shah Mosque of Esfahan, right beneath an exquisitely decorated domed Persian Style ceiling lit by intricately finished lamps and lights. Credit Dubai’s Nakheel Properties with creating the stunning setting, showing they can do much more than simply conjure up the amazing Palm Islands development from the floor of the Persian Gulf.

(images via: In Your Head)

A uniquely beautiful Starbucks outlet occupies a former church building in Ketchum, Idaho, just down the road from the skiing mecca of Sun Valley. Imagine kicking back with a hot mug of java on a cold winter night after a day on the slopes of Bald Mountain… better make it a decaf. 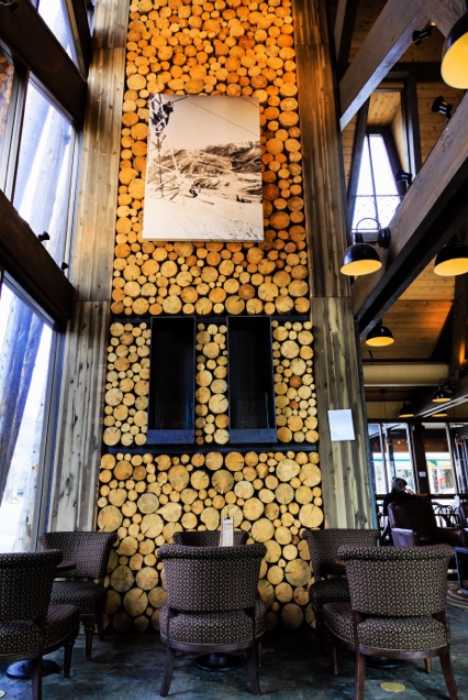 (image via: In Your Head)

Displaying “mountain chic” and utilizing abundant natural stone and roughly worked wood in its decor, inside and out, the Ketchum concept Starbucks aims to address considerable trepidation expressed by locals concerned about rising obtrusive commercialization in the valley. 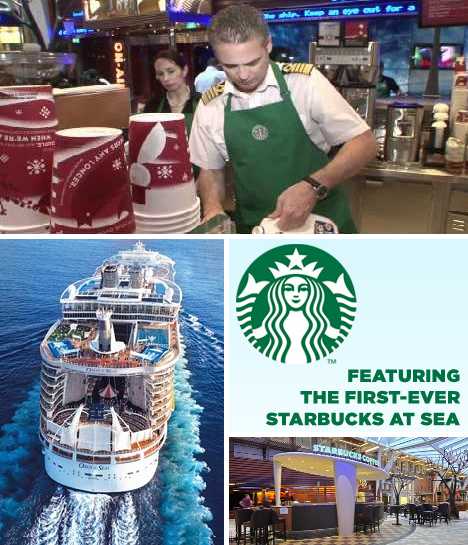 Royal Caribbean International’s newest ship, Allure of the Seas, features a Royal Promenade highlighted by an authentic and official Starbucks cafe – “The First-Ever Starbucks At Sea”, not counting the doomed first mate of the Pequod, of course. We’ve come a long, long way from Rum, Sodomy & the Lash, amiright? 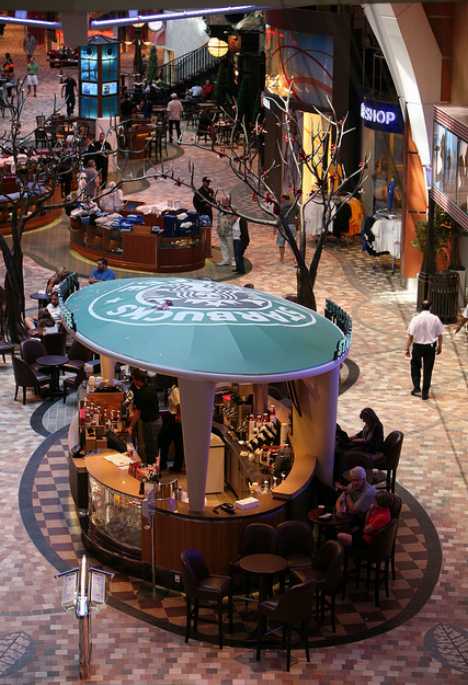 Though the cafe isn’t all that special in and of itself, just the fact that it exists to dispense Starbucks sweet treats from the deck of a freakin’ SHIP is very special indeed. On the other hand, vacationers hoping to get away from their “another day, another mall” lifestyle might be chagrined to find a floating replica thereof just steps from their cabin. 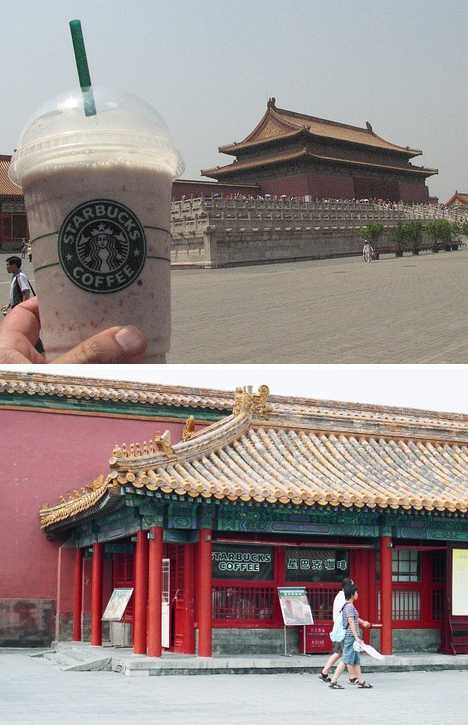 Starbucks’ push into foreign cultures is usually accepted with open arms but sometimes the culture pushes back. Case in point: the ill-advised opening in the year 2000 of a Starbucks inside Beijing’s historic Forbidden City, just a stone’s throw from the Hall of Preserving Harmony. Harmony was not preserved, however, and a well-publicized web campaign to oust the “symbol of America’s low-class food culture” finally bore fruit in 2007. Somewhere, the Last Emperor is smiling… as he gracefully sips his Frappuccino.