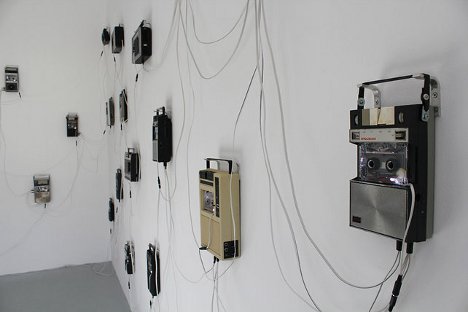 In the broad scheme of audio technology, cassette tapes had a rather rough go of things. Their predecessor, the vinyl record, had been around for decades before and even now continues to be a favorite of audiophiles. Compact discs came along to dethrone cassettes before the tapes had much of a life in the spotlight. But now, as is customary with most obsolete audio technologies, a feeling of nostalgia has finally begun to grip a small number of those who grew up listening to cassette tapes. 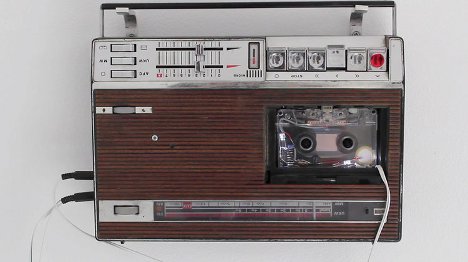 (all images via: Stephen Cornford)

Stephen Cornford, an artist/musician whose work “exists at the intersection of sculpture and music,” puts a beautifully musical spin on this nostalgia with his installation piece called Binatone Galaxy. The installation features 28 vintage cassette recorder/players mounted to the walls of a single room, each outfitted with a custom microphone-fitted tape.

The machines are interesting pieces of technological sculpture, to be sure, but Cornford has recast them into a role they have never before played: instruments in their own right. The players are all hooked up to proximity sensors which cause them to begin playing whenever a visitor steps near and to shut off when not continually activated. 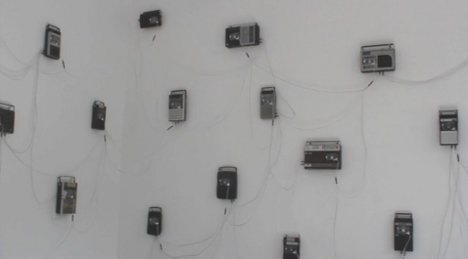 These cassette players are not playing the latest Top 40 tracks, however; they are playing only themselves. The machines become instruments as their characteristic clicks, whirs and hums are showcased in the installation. Each machine makes a different set of sounds depending on its motor, materials, age and other variables. The composition changes constantly as viewers move about the room, activating different machines and causing new and unique combinations to spring up and then fade away…much like the medium itself did.