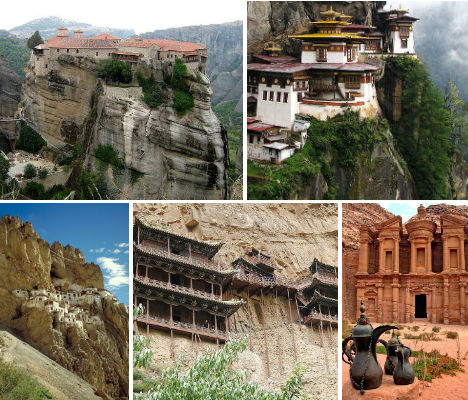 Clinging precariously to sheer cliff faces or perched on towering mountaintops and volcanic plugs, these 12 rocky monasteries throughout the world certainly provide inspiring views of the natural landscapes and cities around them. Built as early as the 3rd century BCE, these monasteries have been carved into stone, and are often deliberately difficult to access with dangerous ladders and rickety suspended paths. 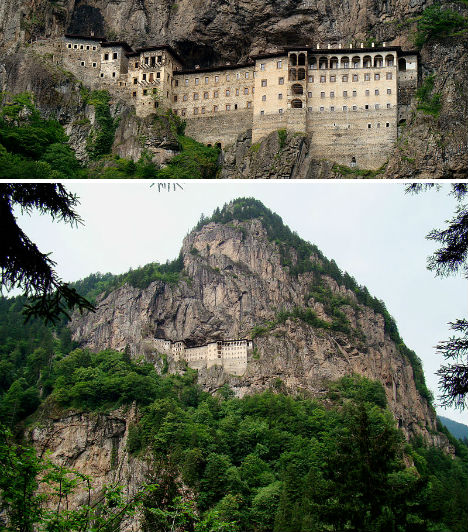 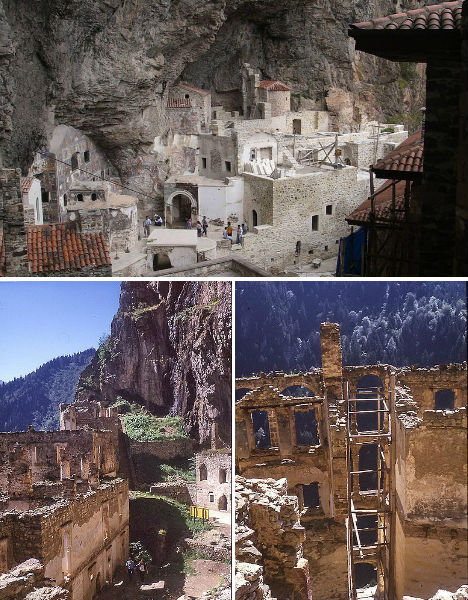 Located on a steep cliff at an altitude of about 3,900 feet in the Trabzon province of modern Turkey, the Sümela Monastery was founded in 386 AD in honor of the Virgin Mary. The monastery’s dramatic appearance and historical significance make it a major tourist attraction for the region. Built into the rock, the monastery has a rock church, several chapels, kitchens, student rooms, a guesthouse, a library and a sacred spring revered by Eastern Orthodox Christians. 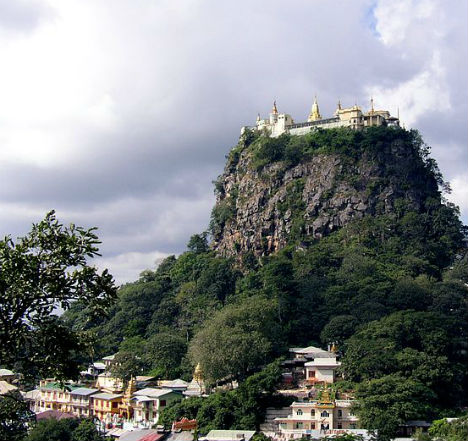 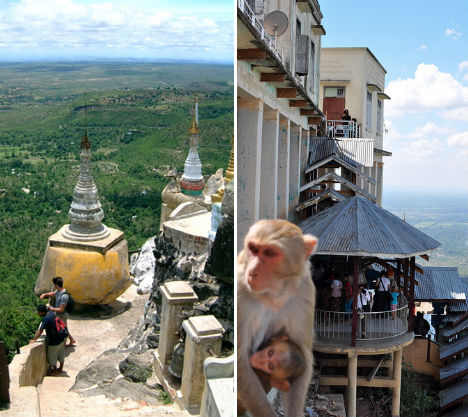 Golden spires sparkle in the sunlight atop a rock platform that rises far above the rest of the landscape. Could the Popa Tuangkalat monastery be any more awe-inspiring? Elevated 2,417 feet above the plains of central Burma on an ancient volcanic plug, this monastery is accessed by 777 stairs. Tourists ascend eagerly to see the lush springs and streams, plentiful Macaque monkeys, and, of course, the view. 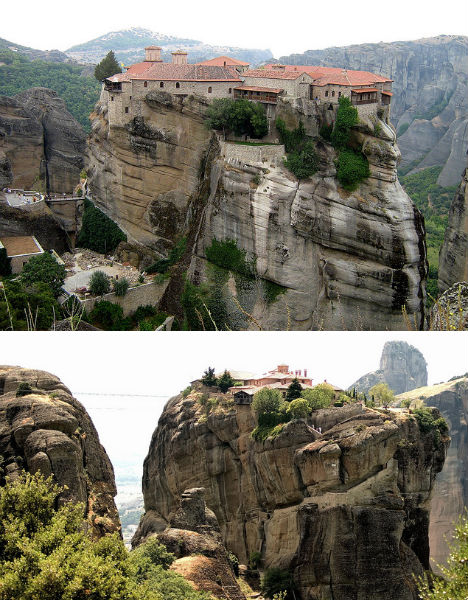 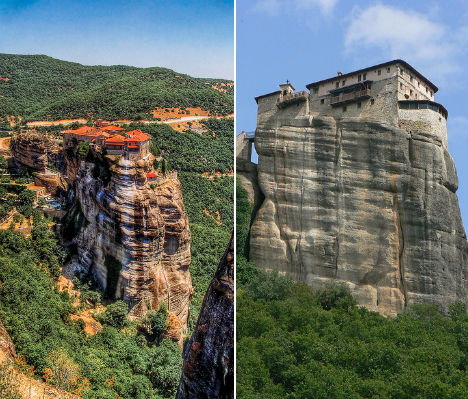 The Meteora complex in Greece features not just one, but six spectacular mountaintop monasteries built on elevated sandstone rock pillars. They include the Holy Monastery of Great Meteoron, which serves as a museum for tourists, as well as the Holy Monasteries of Varlaam, Rousanou, St. Nicholas Anapausas, St. Stephen and the Holy Trinity. Each was constructed in the 15th and 16th centuries, though the rock itself was inhabited by monks long before that. Access used to be deliberately strenuous, requiring a climb up long ladders lashed together. Goods – and people who couldn’t climb – were hauled up in large nets. The complex was bombed during World War II, and many of its art treasures were stolen. Today, it’s home to fewer than 10 inhabitants in each individual monastery, and serves mostly as a tourist attraction. 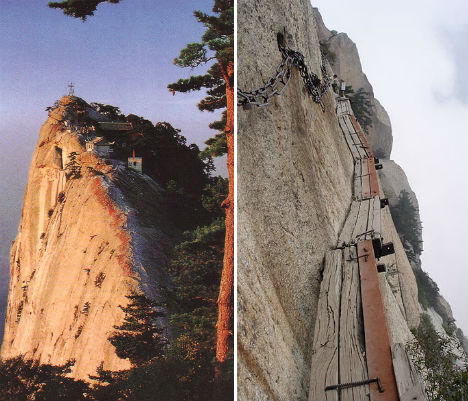 For many years, travelers and pilgrims have negotiated some of the world’s most dangerous roads and paths to reach the monastery that clings to the rock face of Mount Huashan in China. This was intentional, as access was only granted to those who had the will to face their fears, and the very real danger of falling along the way. However, as tourism has increased, safety measures have been put into place, and there are now cable cars and stone-built paths. 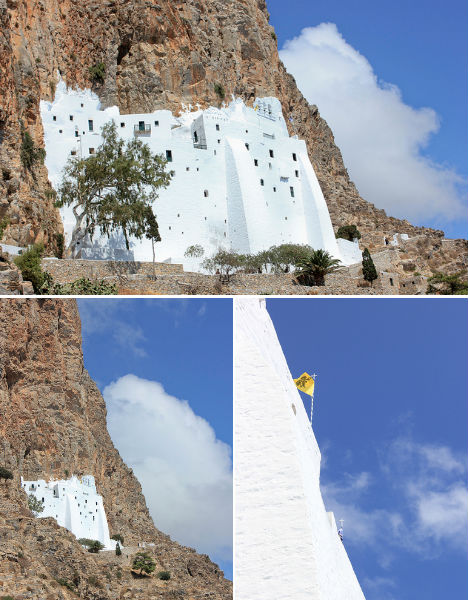 Stark white against the mountain, in the tradition of Greek architecture, Hozoviotissa Monastery looks out over the sea from the island of Amorgos, the most eastern of the Cyclades. One of Greece’s most beautiful Byzantine monasteries, Hozoviotissa was founded in the 11th century and is now an attraction for tourists who come to the island to hike. It contains an icon of the Virgin Mary that, according to legend, ‘miraculously’ washed up on the shore of the island. 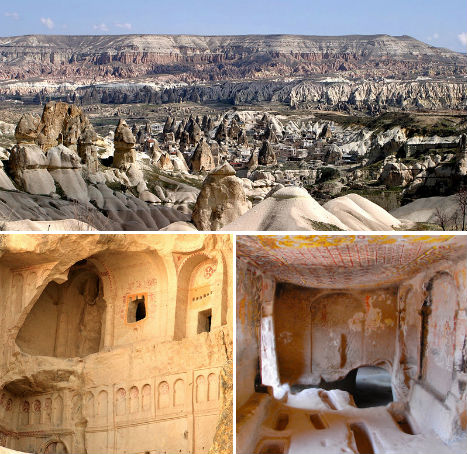 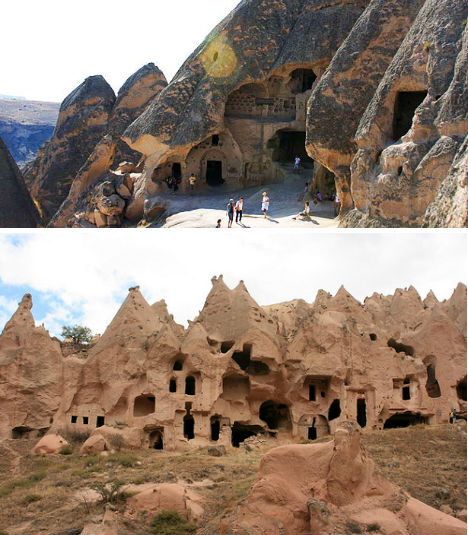 The stunning landscape of Cappadocia in Turkey looks like something from an alien planet, with hundreds of stone ‘fairy chimney’s rising from the earth. Set among the cliffs of this rocky city are a number of churches and monasteries. The Natural Rock Citadel of Uchisar is one of the highest peaks in the area, and inside it has been carved away with ancient tunnels and dwellings.