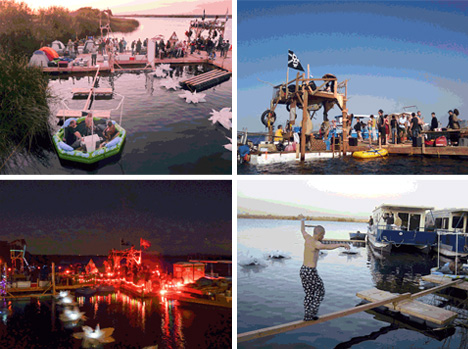 For all its art and controversy, the desert is perhaps the most unique defining characteristic of Black Rock City, home of the Burning Man Festival in rural Nevada. Potentially even more challenging than harsh heat and dust storms: Emphermisle, a temporary autonomous zone on the water, coming to California again this year in the middle of July. 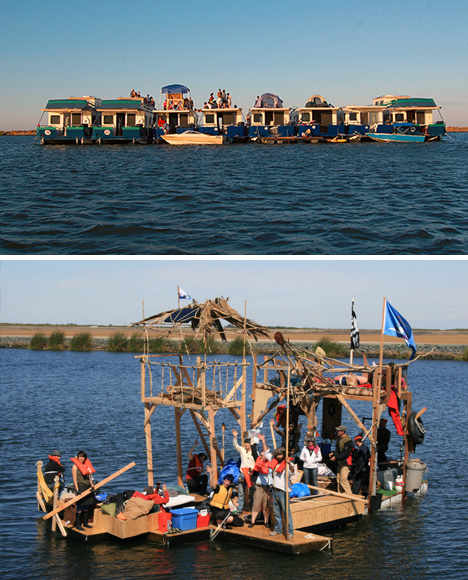 From its creators: “We construct a floating city on the Sacramento River Delta and live on it for five days. Ephemerisle has elements of Burning Man in the early 1990s: a new adventure into an alien environment, with discoveries, adventures, and mishaps along the way.” Unlike the current form of Black Rock City, though: “There are no tickets, no central organizers, and no rangers to keep you safe.”

Its creation, though, is about more than just at temporary experience: “Seasteading seeks to move human communities out into the vast expanse of our planet covered in water. Ephemerisle gives an introduction into the physical challenges of being water and learning ways to deal with them. It also provides for small scale experimentation in differing forms of governance.” 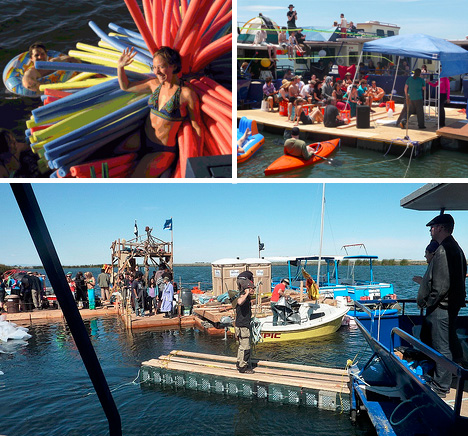 Atossa Abrahamian describes the experience of arriving this year at the event, with its patchwork neighborhoods,  impromptu parties and unpredictable ad hoc public transit system: “It looked, at first, like a shapeless pile of floating junk, but as the boat drew closer, a sense of order emerged. The island was made up of two rows of houseboats, anchored about a hundred feet apart, with a smaller cluster of boats and yachts set off to the west. The boats had been bound together with planks, barrels, cleats, and ropes, assembled ad-hoc by someone with at least a rudimentary understanding of knots and anchors. Residents decorated their decks with banners and flags and tied kayaks and inflatable toys off the sides”