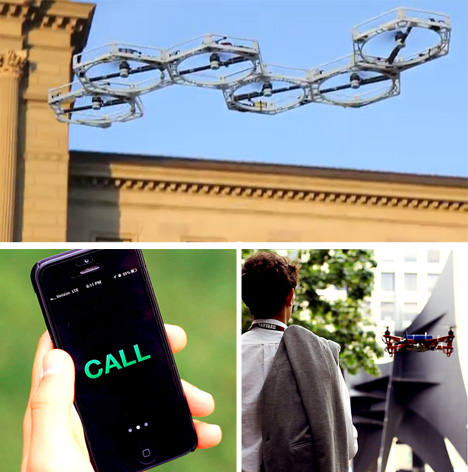 From the MIT Senselab quadcopter and ETH Zurich self-assembling multicopter to DIY drones mounted with paintball guns, toy rockets and automatic weapons, flying robots are quickly making their way from distant war zones to local city streets. The big question in the minds of many is whether this proliferation is a utopian or dystopian development. The following six examples (each with its own video) highlight extremes both positive and negative in the controversial and fast-paced evolution of unmanned aerial vehicles (or: UAVs for short).

Recently Angela Merkel made headlines as she was photographed close-up by a UAV, which then promptly crashed when its controller was approached by police and had to drop the controls. The Pirate Party claimed credit, stating they wanted to force the issue of urban surveillance and the domestic use of non-combat drones. At and it worked: her close encounter with a miniature UFO has sparked serious debate about the roll of UAVs in everything from front-line combat to city surveillance. 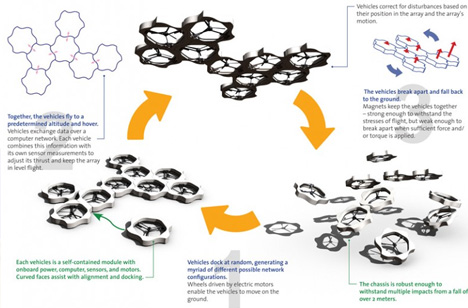 Before going further down the complex political and social implications of drone development, it is worth looking at the innovative upside and sheer technological achievement associated with UAV innovations, starting with the following Distributed Flight Array developed in a Swiss research lab. In this experimental project, a series of autonomous hexagonal copter pods assembles itself into a group on the ground using laser guidance systems. Once attached and aloft, each component copter within the larger composite ‘raft’ plays a roll in maintaining altitude and stability, rotating clockwise or counterclockwise to create lift and cancel torque. 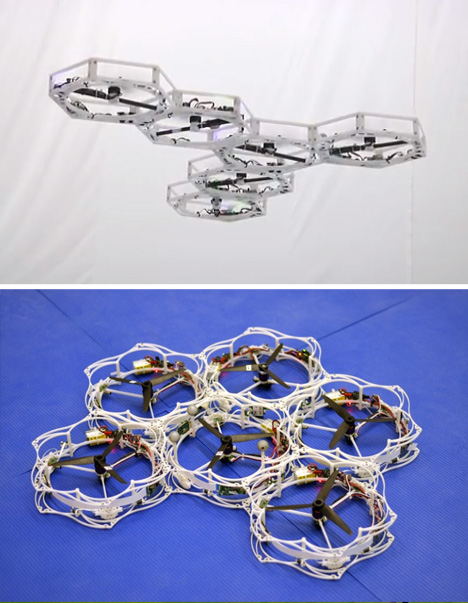 From Gizmag: “As the united band of robots hovers and climbs off the ground, each robot module is using inertial sensors to detect tilt and roll – exactly the same sensors found in an iPhone or iPad to detect tilt. Each of the modules determines how to correct for pitch (forward and back tilting) and roll (side to side tilting) by making small adjustments to the speed of its propeller. The data link on the infrared light beams helps the robots decide which direction and axis is which.” 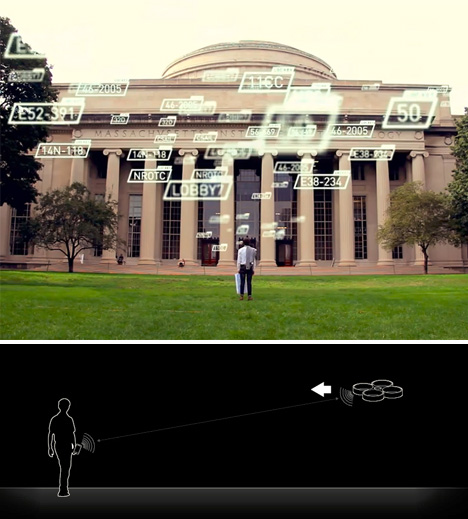 Meanwhile, researchers at Massachusetts Institute of Technology have built a less playful and more purposeful autonomous quadcopter designed to help people navigate cities or to aid in remote search-and-rescue missions. The SkyCall from Senseable City Lab provides networked intelligence in physical form, and is more than just a prototype – initial versions are being deployed on MIT’s campus to give guided tours or take visitors to specific on-demand destinations when summoned by phone or via other mobile devices. 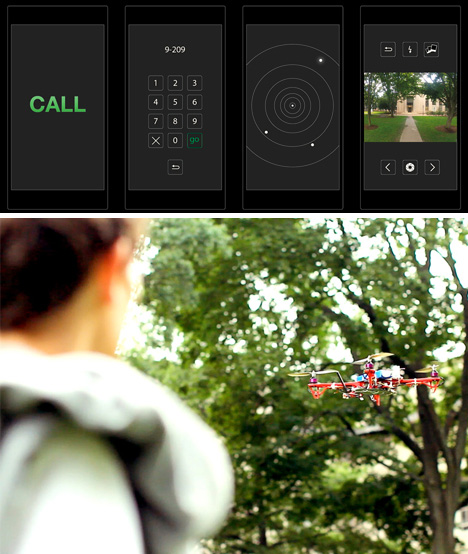 From Dezeen: “UAV technology holds huge disruptive potential …. We want to harness this and specifically explore its value to the city and its inhabitants.” In this case: “Rather than the visitor diverting their attention to a map, the autonomous guide provides an intuitive navigational system of simply ‘following’.” Of course, not everyone has such a bright vision for these various new flying devices, as you will see below.