Parkour isn’t quite the sensation it used to be, but there are plenty of urban athletes all over the world still exploring cities by free running, jumping, flipping and climbing. One of England’s parkour champs is a talented expert who films thrilling point-of-view (or POV) videos of his parkour adventures. 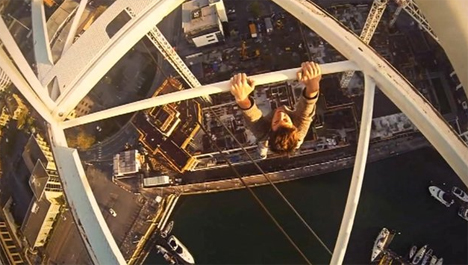 Just in case his incredible videos entice any amateurs to try his death-defying style, we’ll just put this cliche saying out there: if you don’t have proper training, don’t try this at home. Or anywhere else. You can get most of the same thrill by watching Kingston’s heart-stopping POV adventures.

Wearing a helmet camera, Kingston takes his viewers on thrilling rides through rooftops, neighborhoods, and beautiful locations. Although he’s been criticized for glamorizing this dangerous sport, Kingston has also received accolades from people who aren’t able to try it out on their own. He gives his viewers a way to fly through the air and perform daring tricks without ever stepping foot away from their computers.