Originally built in 1944 as a World War II cargo aircraft, the Space Shuttle Cafe lost its wings but gained a kitchen when GMC performed a radical conversion job in 1976. This elaborate food truck now boasts a microwave oven, a stainless steel sink, a hot water heater, an onboard freezer and a set of cooling/exhaust fans. It was recently sold on eBay for the sky-high sum of $150,000 and one would hope the food it serves rates better than that offered by today’s airlines. 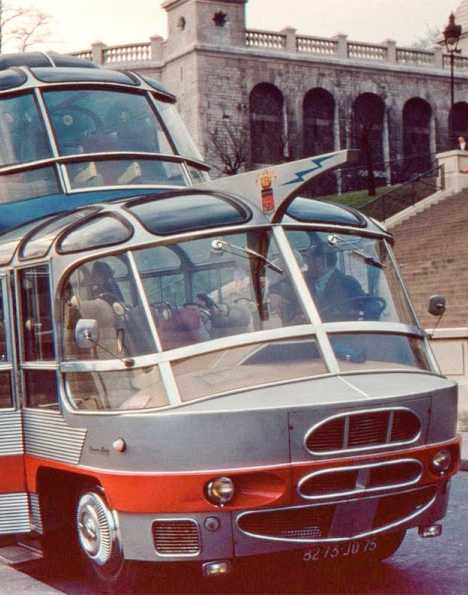 Featured in the 1960 Louis Malle film Zazie dans le métro, the Citroen U55 Cityrama Currus still looks futuristic over a half century after it began shuttling tourists around the sights of Paris, France. A tip of the hat to Dark Roasted Blend for featuring copious info and images of these spectacular vehicles.

Like the aforementioned T55 TeleAvia, the Cityrama Currus (or should that be “Cirri” – there were more than a few made) appeared spacier than actual spaceships of the day and while it traveled at far less than light speed, it did make scoping out the City of Light a decidedly luxurious proposition. 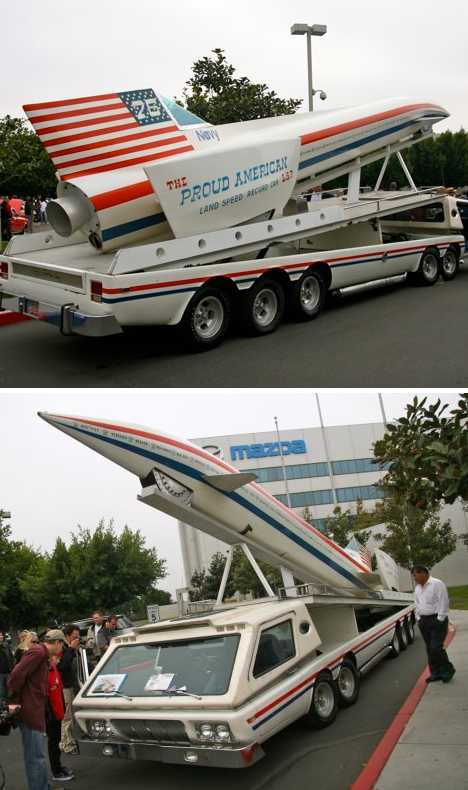 Think promotional road-going rocketships were all creatures of the Nifty Fifties? Most were but the concept lingered on into more ground-focused times. Take “The Proud American”, for example. Built to break the land speed record in America’s bicentennial year of 1976, this red white & blue aircraft/automobile was built by Tony Fox and Ky Michaelson, and was moved from place to place via its matching, Dean Moon-designed, 10-wheeled “Bonneville Boss” transporter.

The reason for transporting the car in such style was to aid in fundraising for the land speed record attempt. Evidently not enough funds were raised and the record run never took place. Fast-forward 30 years and The Proud American is back, courtesy of new owners Tom Shaughnessy and Terry Healy who bought it, dusted it off and put it back on the promotional circuit. It may never break the sound barrier but if you stare at it long enough, you might just break into song… The Star-Spangled Banner, of course.