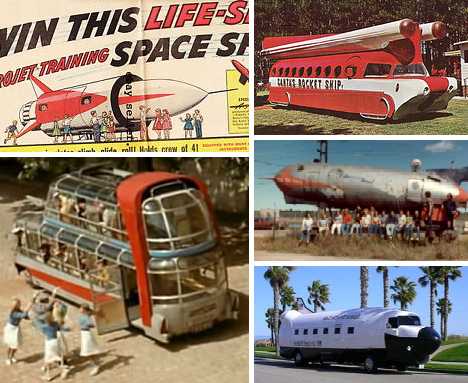 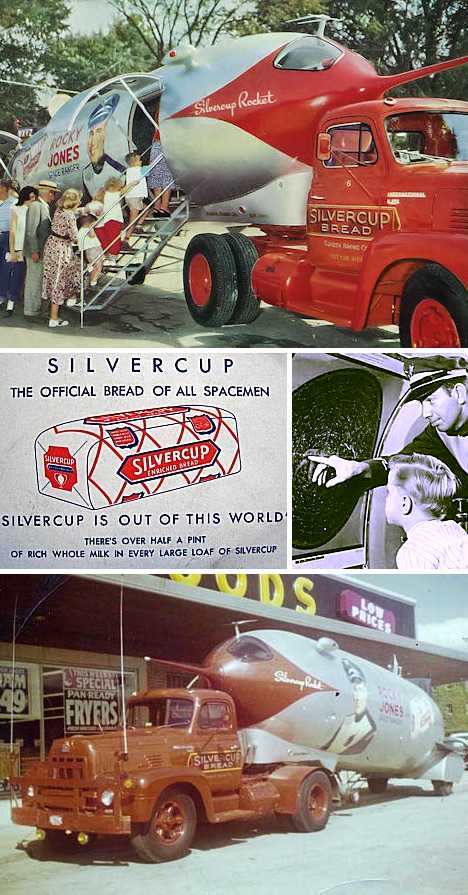 The Silvercup Rocket not only set the bar for future traveling promotional rockets, it was built better than most of them as well. Custom crafted in the truck workshops of Detroit-based Gordon Baking Company, the tubular trailer was packed with electronics to impress visitors – an estimated 100,000 of whom checked out the rocket at the 1954 Michigan State Fair and were given miniature loaves of Silvercup Bread (“The Official Bread of All Spacemen”) as souvenirs. 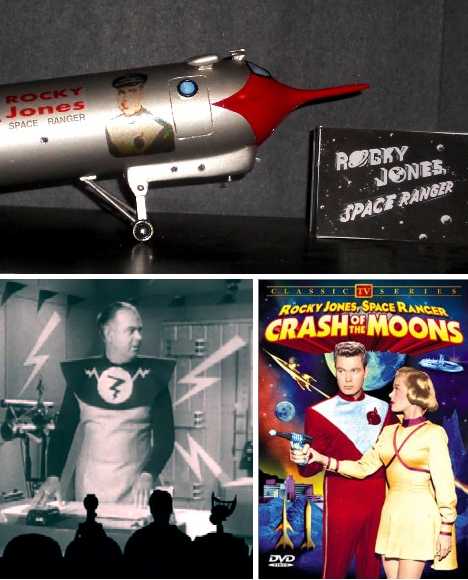 Besides advertising bread, the Silvercup Rocket acted as a finned billboard for the 1954-56 television sci-fi series Rocky Jones, Space Ranger. While the show soon faded from the TV scene, one of its actors (John Banner, above left) found fame a decade later as bumbling Sgt. Schultz on the POW-camp comedy Hogan’s Heroes.

As for the Silvercup Rocket, after spending nearly 20 years decaying outdoors in northern Michigan as the partially repainted Space Ship Mars, it was purchased by Greg Ward, senior curator of Air Zoo in Kalamazoo, MI where it’s undergoing a full restoration.

Built for a subsidiary of the French SUD Aviation company using Citroen’s versatile U55 truck/bus chassis (more on that later), the custom-bodied T55 bus was designed by Philippe Charbonneaux to showcase the FRIGEAVIA/TELEAVIA home appliances brand. Four special T55 buses displaying fin-tastic coachwork by Leffondré were built and driven to places like the Tour de France where they might receive maximum exposure. 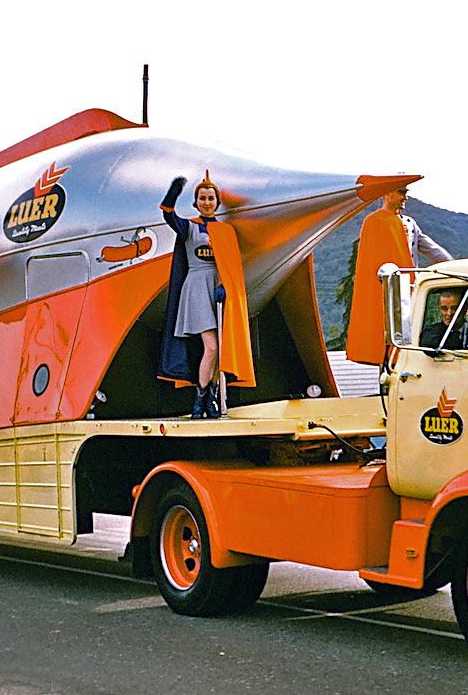 (image via: That Hartford Guy)

The Luer Quality Meat Rocket was built in 1955 and was to Luer Quality Meats of Los Angeles what the Weinermobile was to Oscar Meyer. Luer spared no small expense to have Standard Carriage Works modify the trailer to resemble the Terra IV spaceship from the 1950-55 TV series Space Patrol. The rocket was designed to be suitably spacey inside and out, featuring nifty options such as a large movie screen up front, seats for 24, a vibrating floor to simulate launches, air conditioning, and a bubble machine that provided “exhaust” during appearances at grocery stores and in parades.

(images via: Roadside Resort and The Prescott Daily Courier)

The Luer Meat Rocket (quiet there, Beavis and Butthead) changed hands a number of times following a long and successful promotion career, and its survival to the present day is largely due to years of outdoor storage in the arid California desert and in Prescott Valley, Arizona. Owned for nearly 20 years by Steve LaVigne (above) who paid a whole $100 for it, the rocket was sold in 2007 to memorabilia collectors John and Peter Kleeman of Litchfield, Connecticut. That’s where the Luer Meat Rocket resides these days, undergoing a full restoration at the Space Age Museum.