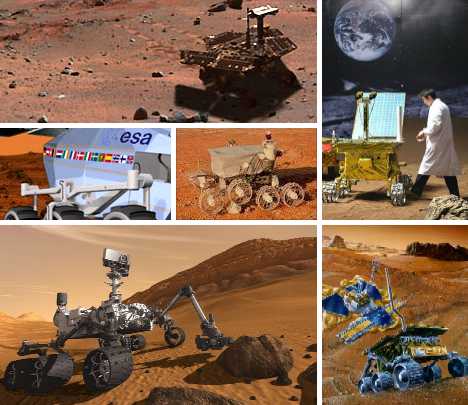 Not since Evel Knievel have wheels flown so far: robotic rovers designed to travel over unearthly alien terrain where no one has gone before, and where no roads await their wheels. Led by the “red rovers” of the former Soviet Union, these 10 roving robotic space explorers are driven to roll back the mysteries of our nearest planetary neighbors. 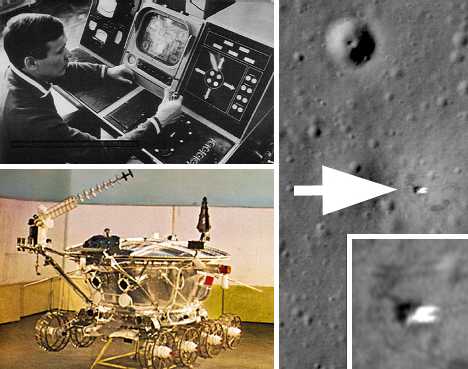 Lunokhod means “moon walker” in Russian but we can call it “the little red rover that could.” Overshadowed by the hugely publicized American manned lunar landing just over a year before, Lunokhod 1 was nonetheless a triumph of engineering (especially that of the Soviet variety) and holds the honor of being the first remote-controlled rover to land and operate on another heavenly body. 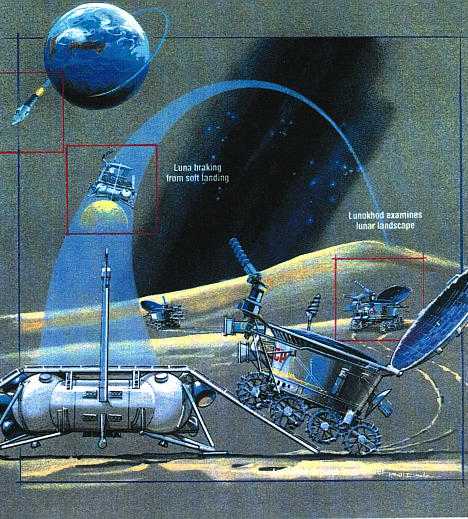 Lunokhod 1 was launched on November 10th, 1970, and the Luna 17 spacecraft carrying it made a successful soft landing on the Moon one week later. Though designed to function for three lunar days (about 3 months), Lunokhod 1 surpassed all expectations by roving a total of 6.55 miles (10,540 meters) over a period of 11 lunar days: almost one full Earth year. 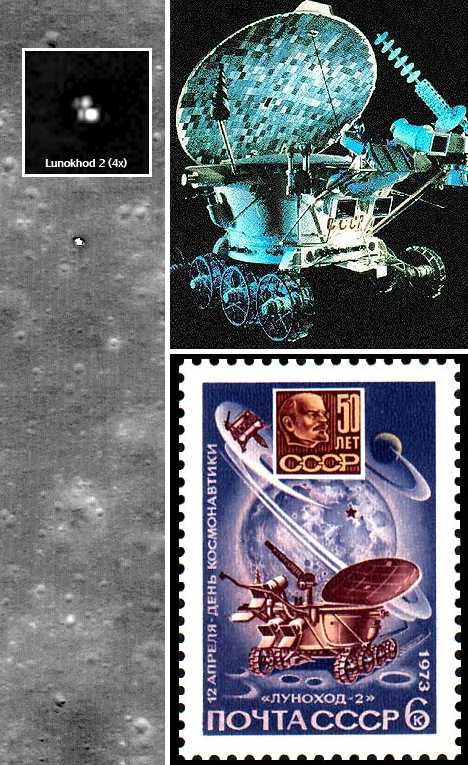 Emboldened by Lunokhod 1’s success, the USSR tweaked the rover’s basic design somewhat and sent Lunokhod 2 moonward just over a year later: the Luna 21 spacecraft landed on January 15th, 1973. Like its predecessor, Lunokhod 2 was designed with a round, clamshell lid which was lined with solar panels. The lid was opened during the lunar day and closed at night, when onboard radioisotope generators kept the equipment warm. 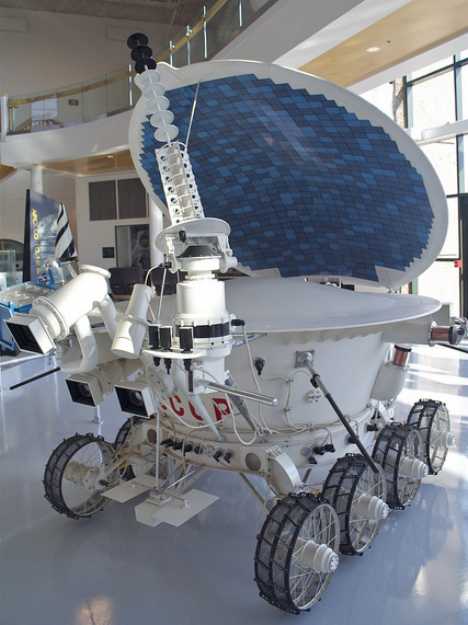 Lunokhod 2 operated through the better part of 5 lunar days and covered a total distance of 23 miles or 37 km; ground controllers lost contact with it in early June of 1973. It’s thought that the open clamshell lid may have brushed the rim of a crater, causing moon dust to fall onto the rover’s components and prevent necessary cooling. In 2010, researchers studying images returned by NASA’s Lunar Reconnaissance Orbiter (LRO) found the final resting places of both Lunokhod rovers. 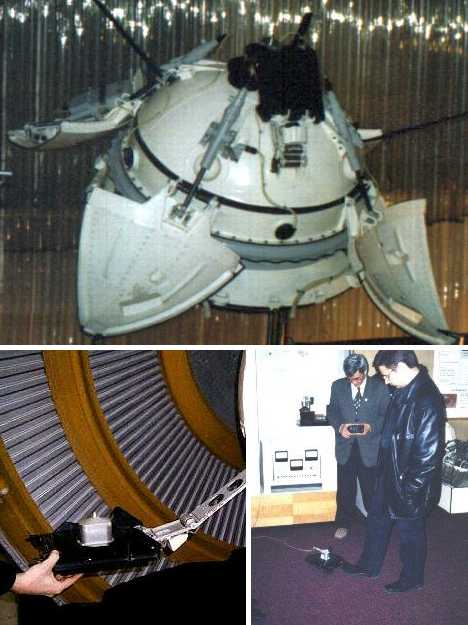 The Soviet PrOP-M Mars mini-rovers were about as basic as you could get. Toaster-sized and equipped with a pair of ski-like flanges instead of wheels, the rovers were designed to explore the area immediately adjacent to the lander while remaining attached to the lander via a power and communications cable. 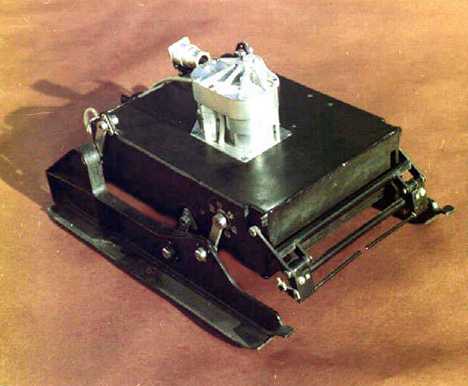 Two PrOP-M rovers were launched to Mars: one was aboard Mars 2, which crashed on Mars in late November of 1971. The second rover aboard Mars 3 safely soft-landed on December 2nd, 1971 but contact was lost with the lander just 14.5 seconds after landing. Only one image was sent back to ground controllers, which showed almost no detail and very low light levels: it’s thought that the lander’s communication systems were knocked out by a severe dust storm. 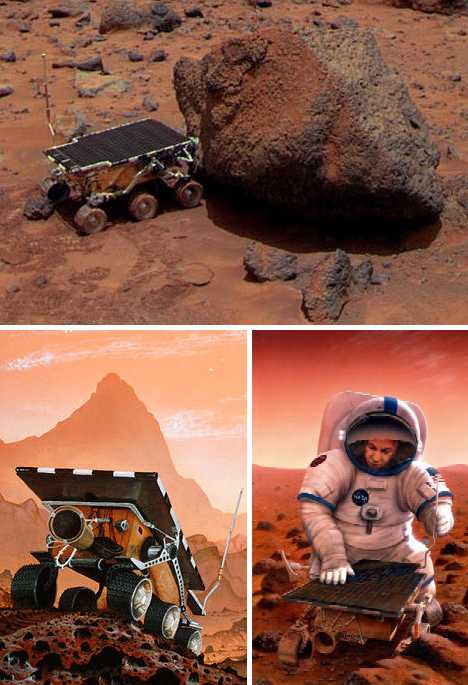 One of the highlights of NASA’s Mars Pathfinder mission was the Sojourner rover. The six-wheeled robotic explorer weighed just over 23 lbs (10.5 kg) and was 26 inches (65 cm) long. Sojourner was equipped with a three-camera imaging system, an Alpha Proton X-ray Spectrometer (APXS) and a Wheel Abrasion Experiment used to analyze Martian rocks. It’s advanced (for the time) onboard computer featured a 100 kHz Intel 80C85 CPU with 176 KB of flash memory solid-state storage and 512 KB of RAM. 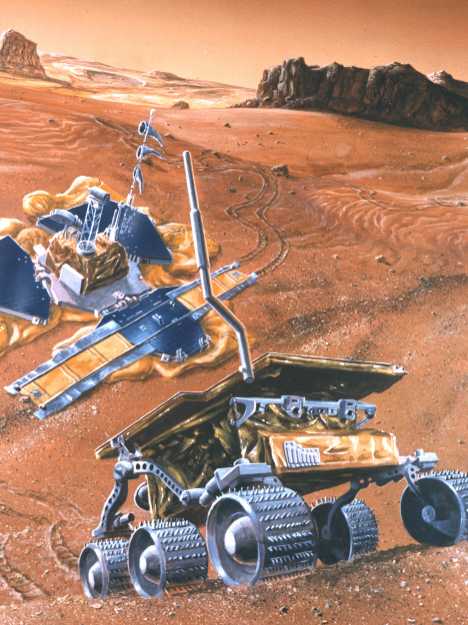 Sojourner was extremely successful, functioning for 83 Mars days following its landing on July 4th, 1997 and sending back 550 photos back to Earth. Like its namesake parent mission, Sojourner was the “pathfinder” for larger and more powerful rovers to come. 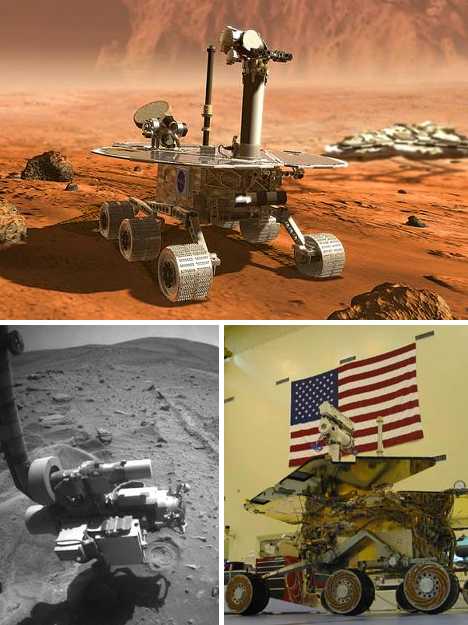 (images via: Daily Galaxy, National Geographic and How Stuff Works)

Spirit MER-A (Mars Exploration Rover A) landed on Mars on January 4th, 2004, and continued to function for an unprecedented length of time with last contact being received in March of 2010. Along with its twin rover Opportunity (MER-B), Spirit drove a total of 4.8 miles (7.73 km) and had its life extended several times after accidental cleaning of its solar panels by Martian dust-devils. 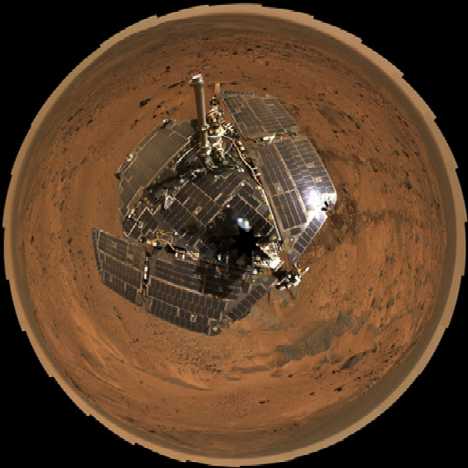 A series of events including a broken wheel, being mired in deep sand and having to drive in reverse indicated the toughness of the rover in an unimaginably harsh environment. In fact, the last four months of Spirit’s “life” were spent immobile, stuck in sand with only 4 wheels capable of function. 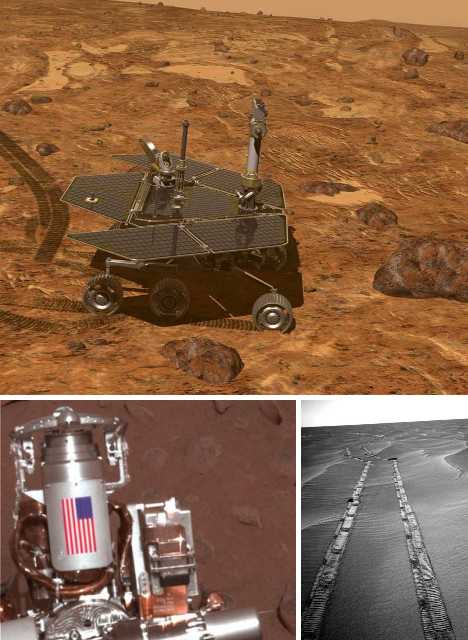 At press time, NASA’s Opportunity rover is the only man-made object currently functioning on the surface of Mars. Landing on the opposite side of the planet from its twin rover, Spirit, Opportunity (officially MER-B) rolled off its lander platform on January 25th, 2004, and has since covered more than 21 miles (34 km) on its ongoing journey of exploration and discovery. 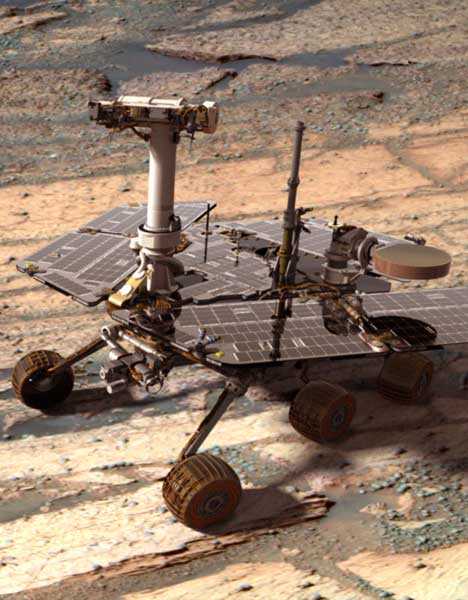 Opportunity has so far outlasted its makers’ survival estimates by a factor of 30, and spent the better part of two years in and around Victoria Crater where it inspected layered outcrops that indicate Mars had a much warmer and wetter history than previously thought. Opportunity (and Spirit as well) incorporate aluminum salvaged from the World Trade Center in their construction. The metal was used to craft shields that protect cables on the rovers’ drilling mechanisms, and display the American flag as shown above. 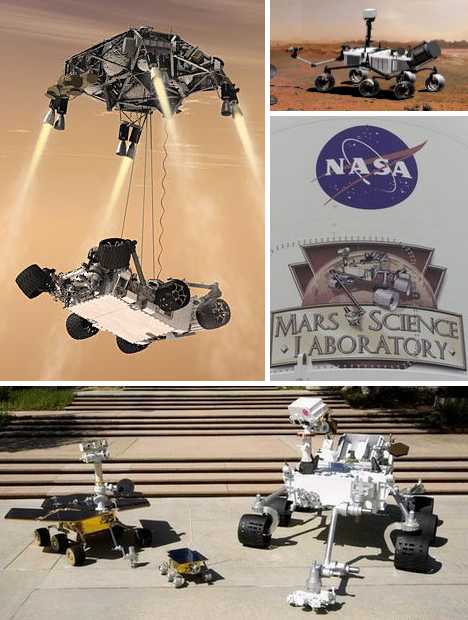 (images via: CSMonitor, Space.com and Crunchyroll)

America’s latest (and by far the largest) planetary rover, dubbed Curiosity, successfully launched on November 26th, 2011, as part of NASA’s Mars Science Laboratory (MSL) mission to the Red Planet. The estimated landing date for MSL and its SUV-sized rolling cargo via the unproven “sky crane” method is August 5th of 2012. 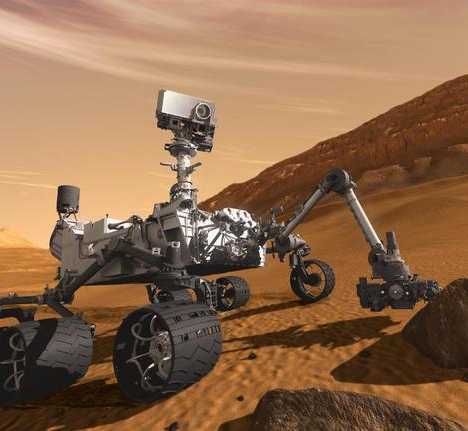 Curiosity weighs a mammoth 1,984 pounds (900 kg) – that’s right, a ton! It’s 10 feet (3m) in length and is powered by a radioisotope thermoelectric generator (RTG) similar to those which powered the 1976 Viking landers. The 10.6 pounds (4.8 kg) of plutonium-238 dioxide inside the RTGs negate the need for solar panels and should provide more power over a longer period of time. 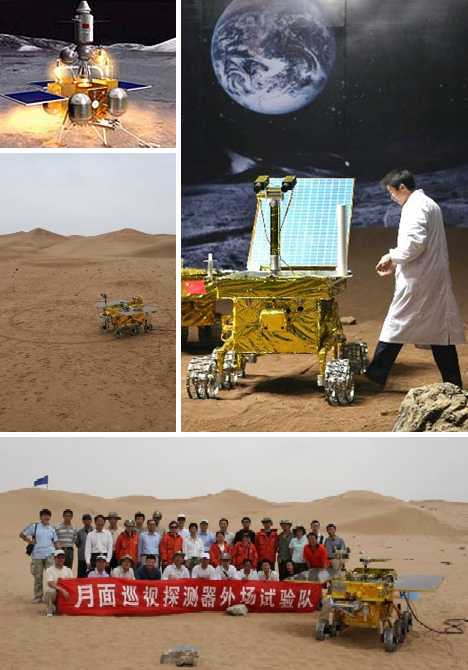 China has grand plans afoot for exploring the Moon and planets, but before a foot falls on the lunar seas, man-made wheels will chart the ground. The six-wheeled Chang’e 3 lunar probe’s rover, currently undergoing durability and endurance testing in the deserts of western China, is scheduled to touch down on the Moon sometime in 2013. 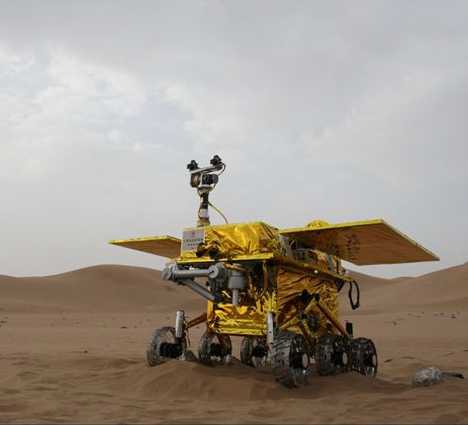 The Chang’e 3 rover is being developed independently by China and will incorporate state-of-the-art intelligent robot technology that will allow it to explore and analyze an area up to 16,400 feet (5,000 m) from its lander. 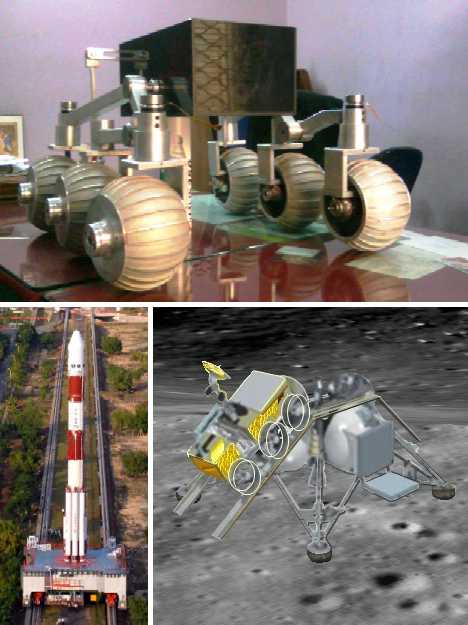 The Indian Space Research Organization (ISRO) scored an astronomical coup in 2008 when their Chandrayaan 1 lunar orbiter found strong evidence of water ice at the Moon’s north polar region. Now ISRO is preparing to follow up on that mission with an even more ambitious one: Chandrayaan 2, a lunar lander carrying a wheeled roving vehicle. ISRO is working with Russia’s Roscosmos to develop the combined orbiter-lander-rover mission scheduled for late 2013 or early 2014. 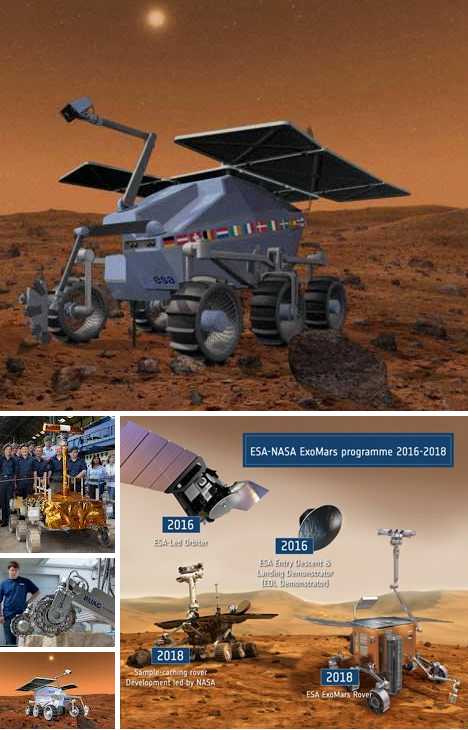 ExoMars is an ambitious, two-part mission developed by the European Space Agency (ESA) with cooperation and participation by NASA. The mission involves an orbiter with a static lander to be launched in 2016 and a second launch two years later that will deposit the ExoMars rover on the surface of Mars in 2019. 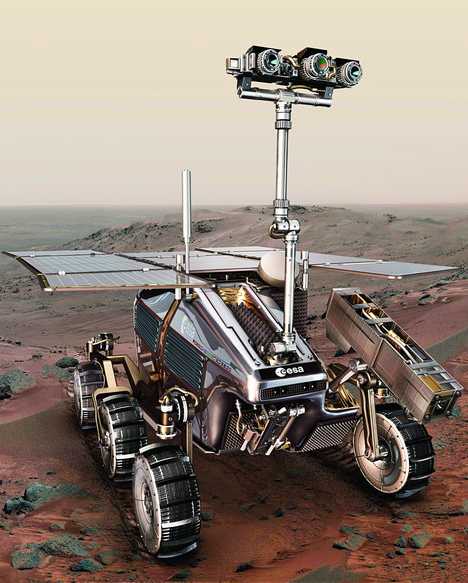 The ExoMars rover is a six-wheeled vehicle weighing approximately 650 pounds or 295 kg, which places it roughly between NASA’s MER rovers and the Curiosity rover size-wise. The rover’s most distinguishing feature is its autonomous software package that will allow the rover to make independent navigation decisions without any input from ground controllers on Earth. The rover can travel around 330 ft (100 m) daily and is being designed to have a working lifespan of about 218 Martian days (over 200 Earth days). 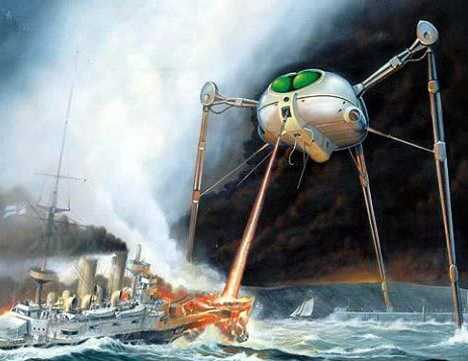 Robot rovers make excellent pathfinders: where rovers go, Man will follow. It’s a sensible strategy for any space-faring race, which raises the question: if (or when) aliens send their roving explorers to Earth, will we be able to recognize them for what they are? Somehow I think we’ll have no trouble at all.