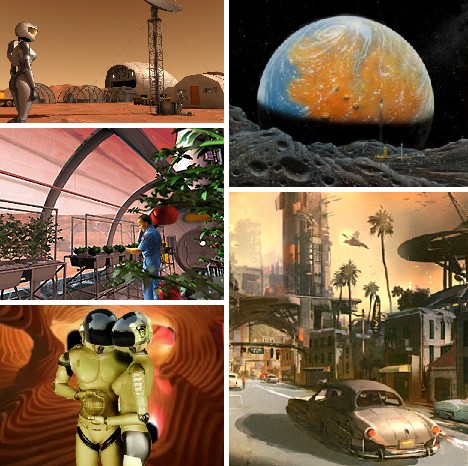 Most space scientists, sociologists and sci-fi writers agree: when humankind finally sets down roots somewhere other than the planet of our birth, Mars is our most likely destination. Chilly, lifeless (as far as we know) and frighteningly far away, Mars still offers the best hope for a human race whose figurative eggs have been kept in one basket for far too long.

Living It Up On Mars 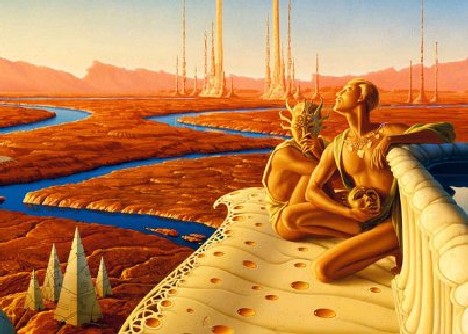 Back in the days before the Space Race really got going, our impressions of landing, living and lasting on Mars came courtesy of sci-fi writers like Ray Bradbury at first, Hollywood producers after. 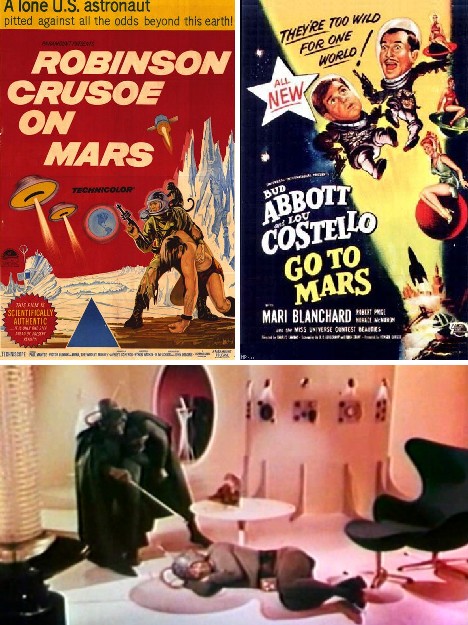 Films like Robinson Crusoe On Mars, Abbott And Costello Go To Mars, and Santa Claus Conquers The Martians took a lot of liberties when it came to portraying life on the Red Planet – who was going to argue?

The Air Up There 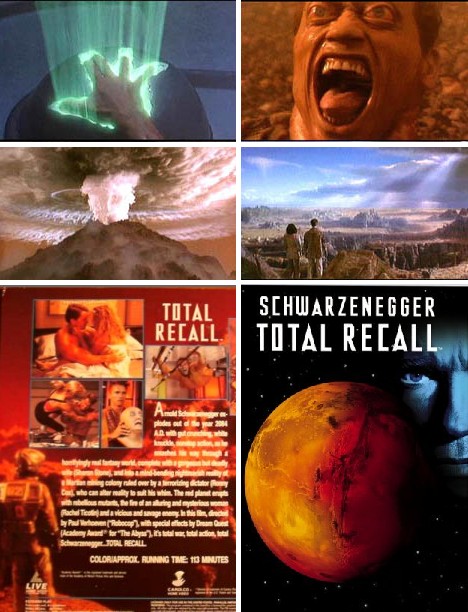 As robotic probes like the Mariner orbiters and the Viking landers revealed the red planet’s forbidding nature, Hollywood shifted gears slightly and gave us screen gems like Total Recall. While short on hard science and heavy on Ah-nold, Paul Verhoeven’s Total Recall (1990) at least tried to give a reasonable impression of what the seedier side of life would be like if grafted onto the Martian landscape. 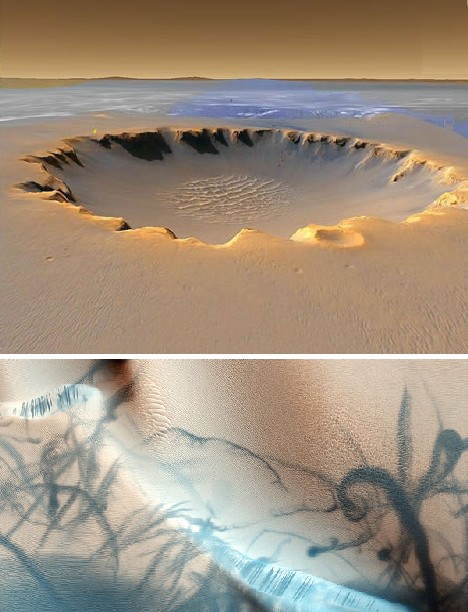 (images via: English Online and Doobybrain)

While Mars’ rugged beauty cannot be denied, the facts, figures and photos show the planet to have a harsh, unforgiving environment that will be a huge challenge for the first colonizers to deal with. 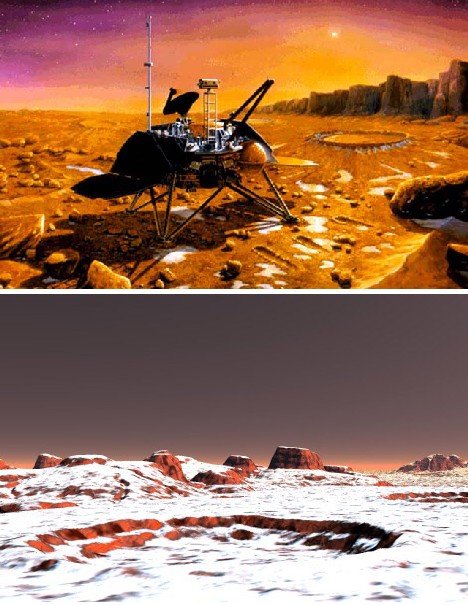 (images via: JPL/NASA and Arcadia Street)

Even so, enough raw materials, sunlight and most importantly water are all available on Mars – if we have the strength and stamina to use them. 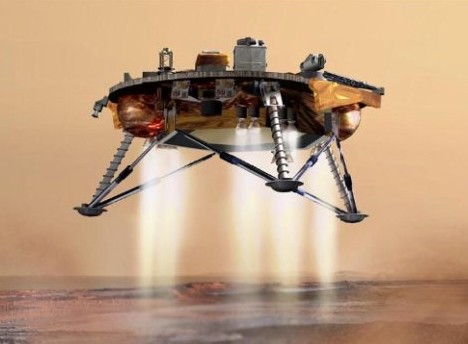 Landing on Mars isn’t easy to begin with, and when manned spaceships try it it’ll be even more difficult. Bouncing ball landings like those the Mars rovers conducted are out of the question, of course, so rocket-assisted landings such as the one made by the Apollo astronauts (on the moon) and the Phoenix lander are the alternative. 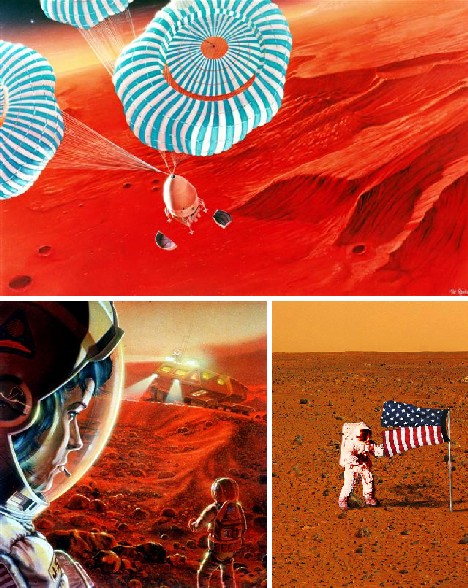 (images via: Slipperybrick and Space Gizmo)

At least parachutes can be used to slow the lander down during descent through the thin Martian atmosphere.

Checkin’ Out The New ‘Hood 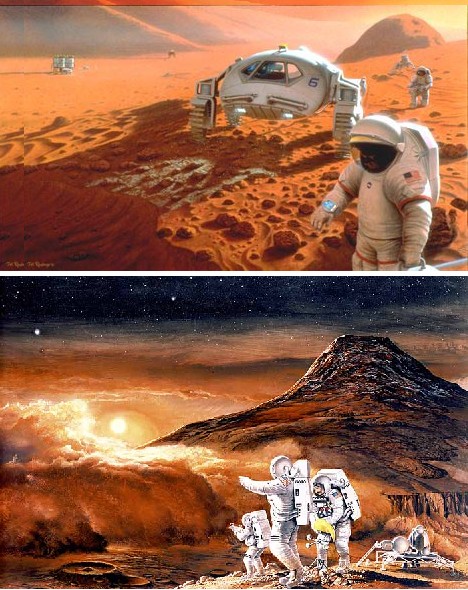 Once on the ground, it’s time to look around. At first, astronauts landing on Mars will focus on conducting scientific experiments, finding & testing mineral samples and generally exploring the landing area. They’ll do this in souped-up variants of the reliable solar-powered rovers who have vastly outlasted their original projected lifespans. 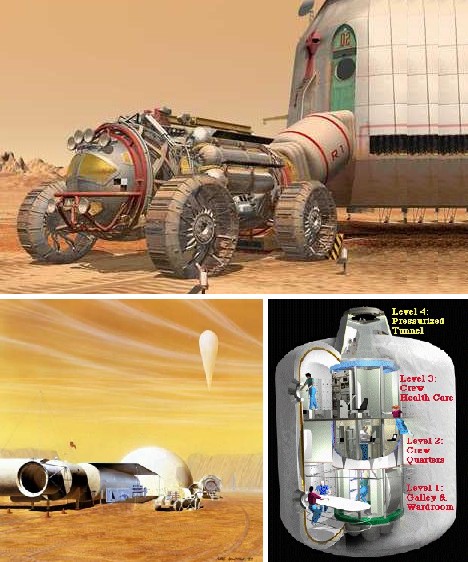 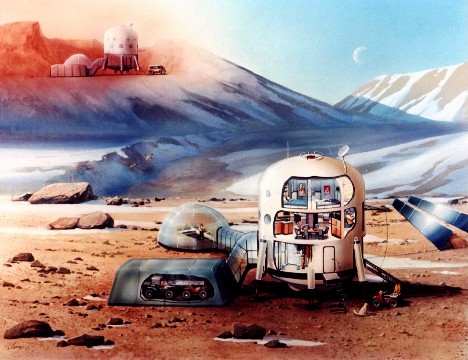 Shelter will be a priority for explorers who plan on staying a while. The first “homes” on Mars will likely be spaceships designed for a one-way journey: if they can survive the rigors of space flight, their structure should be able to handle anything Mars throws their way. 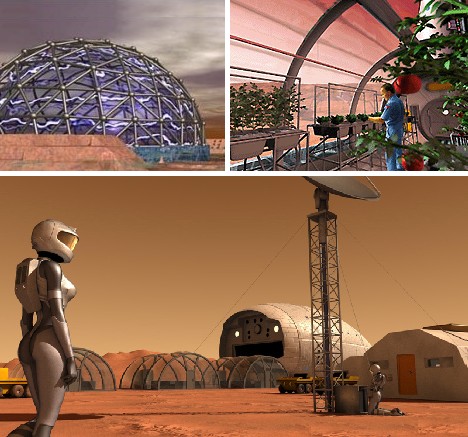 Along with shelter, food is an essential requirement for anyone who wants to stay on Mars after all the packed rations have been consumed. 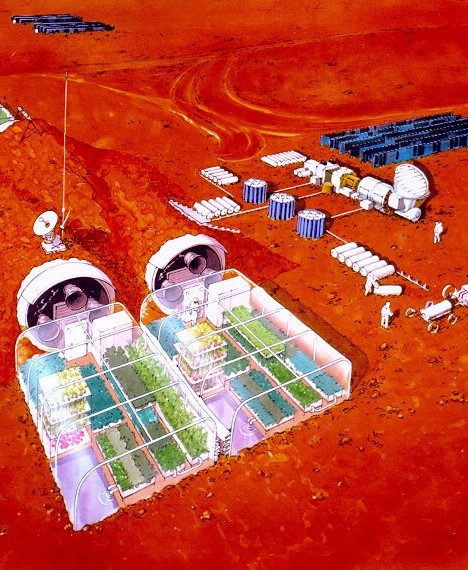 Martian greenhouses filled with (and inflated by) Earthly atmospheres will draw upon the ice that, as reports from the Phoenix lander indicate, can be found mere inches beneath the surface. Will Martian soil be to the liking of earth crops? Thorough testing will have to be done to make sure it is. 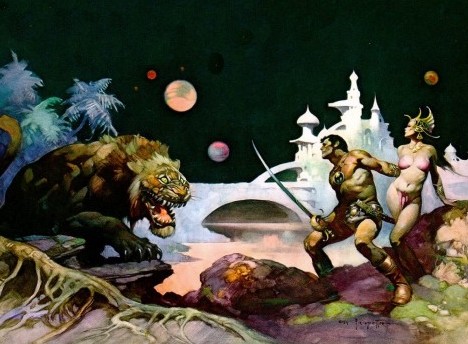 We have seen the Martians, and they are ourselves. It’s only natural that once Mars colonies are established, the colonists will do their fair share to help the colony grow… by doing what comes naturally. 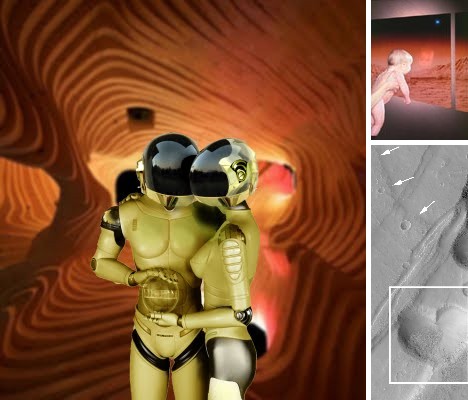 That “heart” above? Just one of the curious features of the Martian surface which, along with the famous Face On Mars, look eerily familiar but are completely natural. 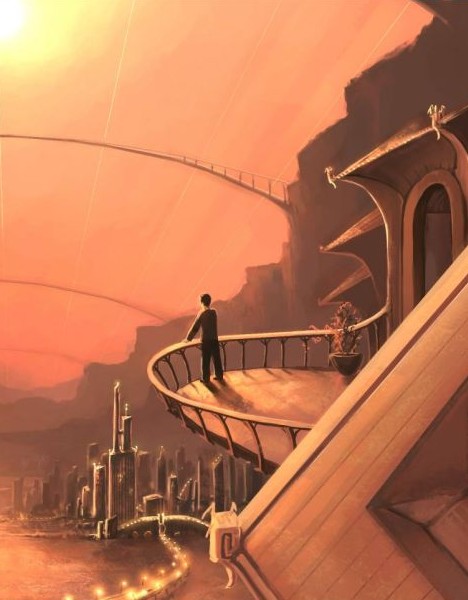 From tiny acorns, mighty oaks will grow… and so it will be with the first permanent settlements on Mars. The time will indeed come when today’s science fiction is indistinguishable from science fact. 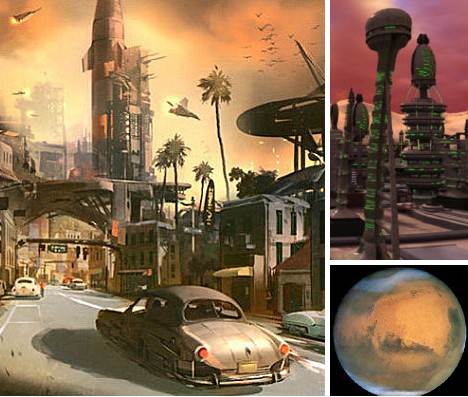 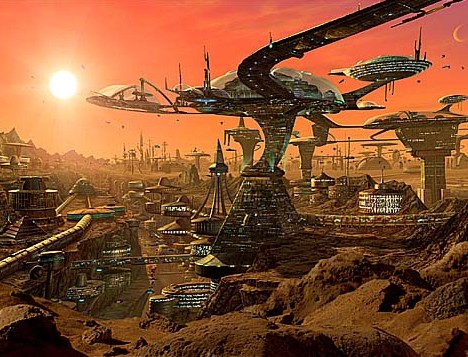 (images via: Books On Mars and Tim Landry)

How mature Martian cities will look is purely speculative but if one applies urban trends on Earth, the results on Mars don’t seem so surprising. The urban model isn’t exclusive to Earth – cities, once established, will grow and evolve regardless of which planet’s soil they stand upon. 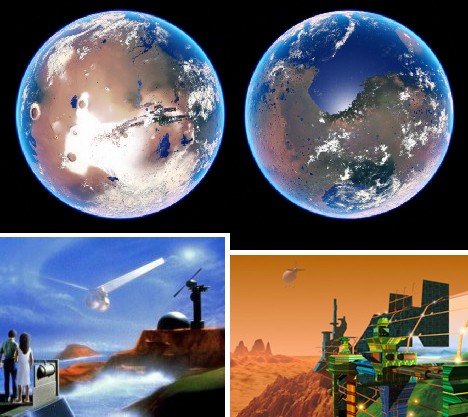 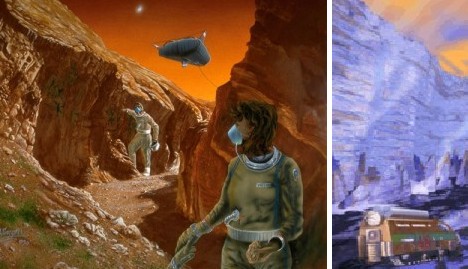 Ready to think big? Instead of adapting our lives and lifestyles to suit Mars, why not adapt the planet to suit OUR needs? It’s called terraforming and it takes time – hundreds to thousands of years (as opposed to Total Recall’s 2 or 3 minutes). 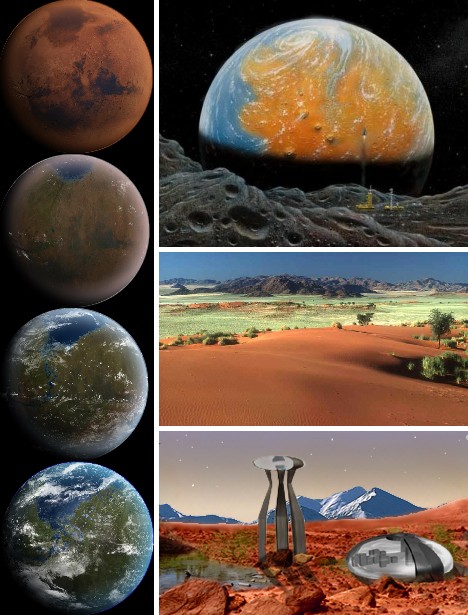 (images via: Wikimedia and Hudsonfla)

The results would be well worth the time and effort, however, as these images of a terraformed Mars show so well. 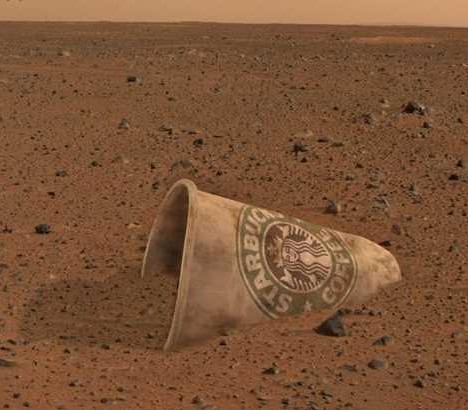 (image via: Between The Lines)

Colonizing Mars is one way for humanity to start over, as it were, with a clean slate. This is a challenge we’ve accepted before, following Columbus’ (re)discovery of the New World… the results were mixed, depending on who you ask. Will we have better (or worse) luck with Mars?