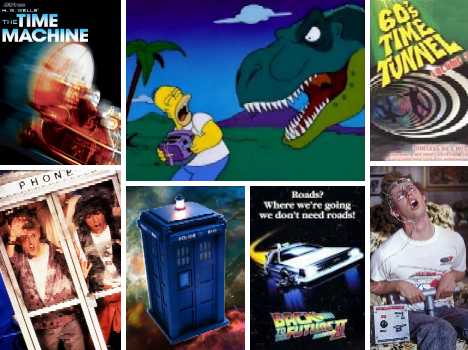 Time travel is a relatively modern concept first popularized by British author H. G. Wells in his pioneering sci-fi classic The Time Machine. Over a century of virtual time exploration has given us a wealth of variations on Wells’ antique Brass Age time machine, showcased in technicolor on TV and theater screens. Here are 15 of the most memorable. 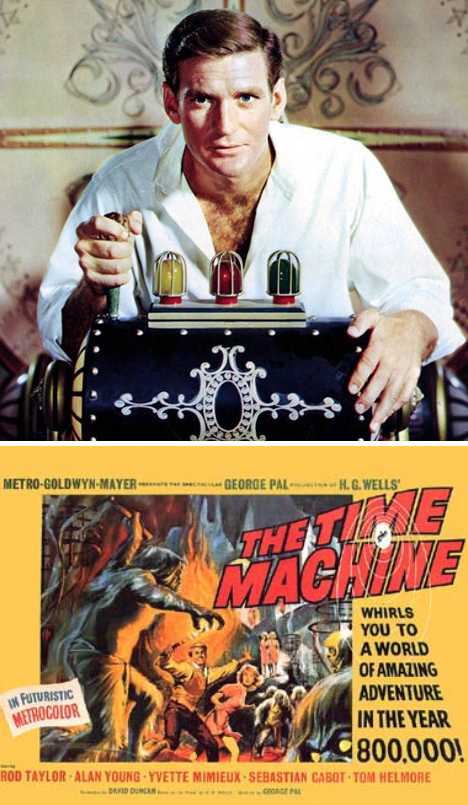 H. G. Wells may be more famed for his classic War Of The Worlds but his 1895 novel “The Time Machine” proved the prescient Englishman was no one trick pony. Wells’ masterpiece has spawned a number of radio, TV and film adaptations but 1960’s theatrical release remains a stunning tour de force half a century later. 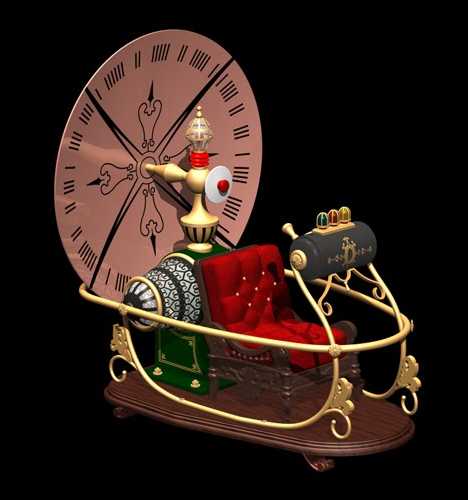 (image via: Forces Of Geek)

The time traveler’s handcrafted Victorian-era contraption mixes elements of Santa’s sleigh with steampunk accessories in turned brass, red velvet and faceted crystal. Definitely a keeper and well worth bidding on should it show up on eBay… morlocks optional. 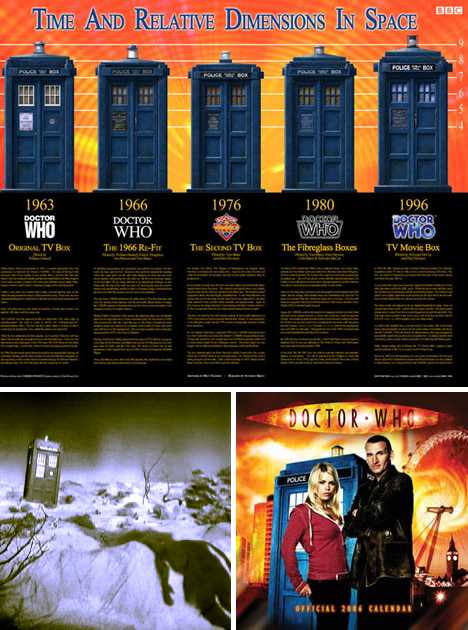 Over five decades, eleven Doctors and one well-worn TARDIS, the iconic BBC science fiction television show has become a cultural institution worthy of inclusion (audio only, pity) in the 2012 London Olympics Opening Ceremonies. As for the TARDIS (an acronym standing for “Time and Relative Dimension in Space”) itself, the show’s hagiography describes this unassuming and quintessentially English time machine as being an obsolete, unreliable museum piece whose “chameleon circuit” froze up during a visit to 1963 London, locking it into the shape of a police call box. 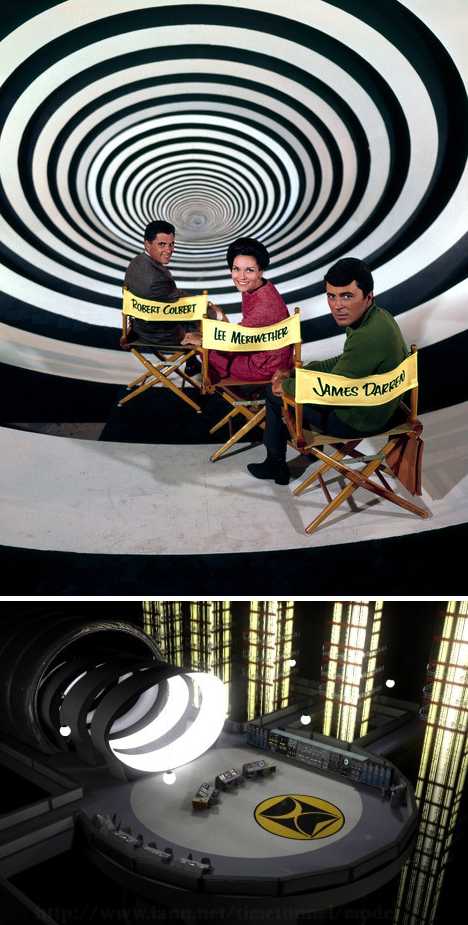 “Two American scientists are lost in the swirling maze of past and future ages, during the first experiments on America’s greatest and most secret project, the Time Tunnel.” So began most of the 30 hour-long episodes of The Time Tunnel, an ambitious TV series helmed by veteran master of disaster Irwin Allen. Starring James Darren, Robert Colbert and Lee Meriwether, the show was a minor hit for ABC-TV in 1966-67 and featured an enormous, pop-art tunnel reaching back into the mists of time. After being picked up for a second season, The Time Tunnel was abruptly cancelled when regime change at ABC saw the network’s programming reshuffled. As for Doug & Tony, they’re still out there, somewhere. 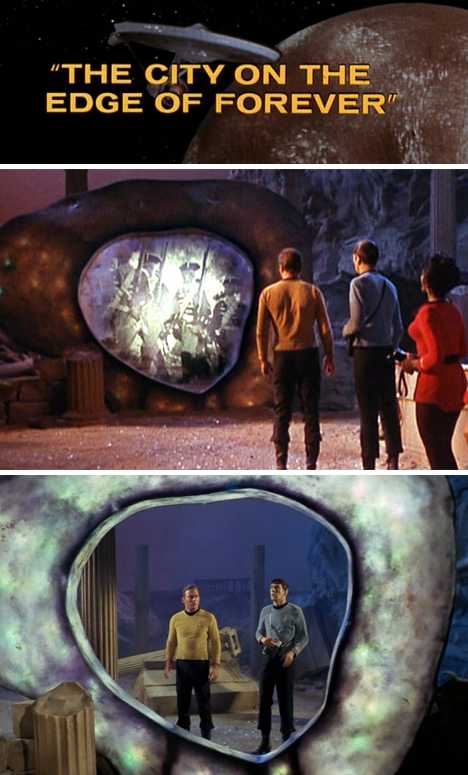 First broadcast on April 6th of 1967 to end the first television season of Star Trek, The City On The Edge Of Forever saw the series’ main three characters traveling to 1930’s New York City via the “Guardian of Forever”, a time portal built by a long-lost civilization. While many journeys are possible using the Guardian as a gate, the consequences of doing so should not be taken lightly. 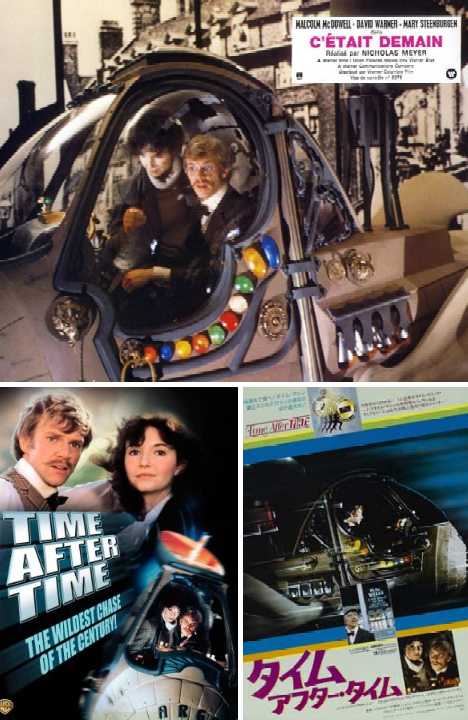 The 1979 film Time After Time doesn’t just employ time travel as a plot device, it positively revels in it. H. G. Wells (played by Malcolm McDowell) and Jack the Ripper (played by David Warner) play a high-stakes game of hide & go seek in the time stream as both characters attempt to assert control over Wells’ time machine to assure the triumph of good or evil. 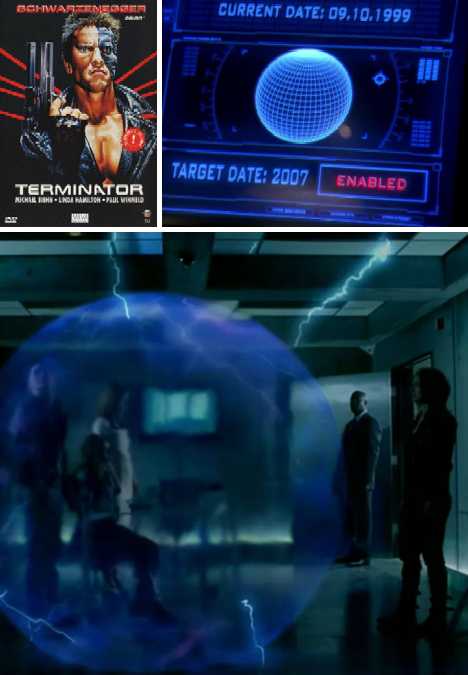 (images via: MENNO and Terminator Wikia)

The Terminator series of films and TV series’ takes a slightly different tack when conceiving time machines… there’s no actual time-traveling machine, only a base station in the future from which “time bubbles” are created and launched. Only organic matter can complete a Terminator-style time trip, which explains why both Terminators and humans like John Connor’s father arrive naked and weaponless. One surmises H. G. Wells would not approve. 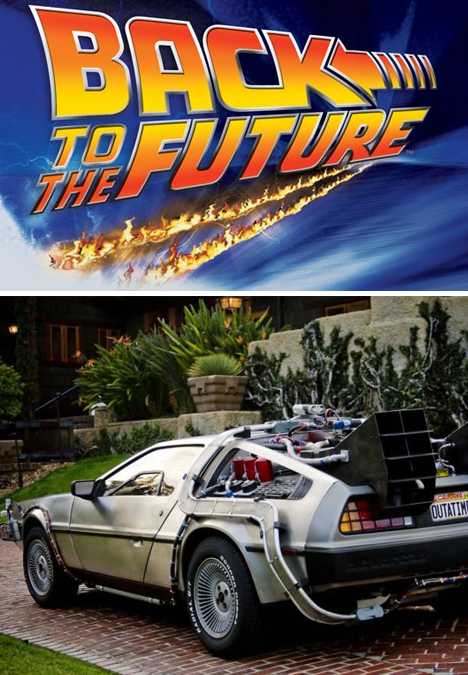 (images via: Joystiq and Collider)

As we approach the 30th anniversary of the first Back To The Future film, it’s somewhat amusing to note the vast differences in the filmmakers’ world of 2015 and the much more pedestrian world of almost 2013. Levitating skateboards, anyone? 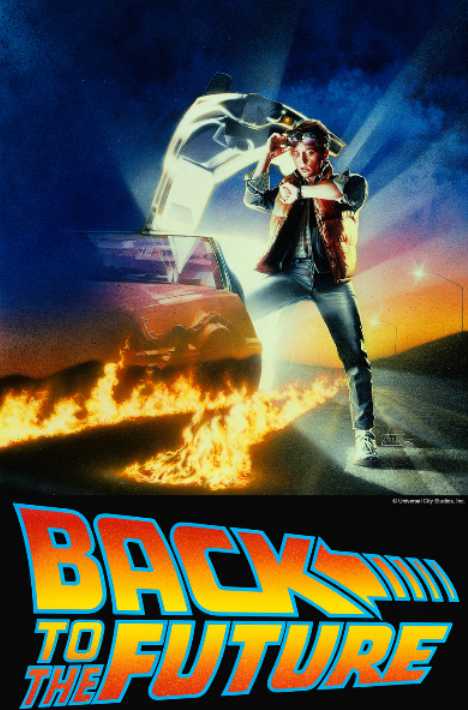 Quibbling aside, the enduring star of all three films is Doc Brown’s ultra-modified DeLorean and its mysteriously evocative flux capacitor. Why a DeLorean? “The way I see it,” explains Doc himself, “if you’re gonna build a time machine into a car, why not do it with some style?” Now THAT’s heavy.

(images via: DailyFlix and Movies Top)

There are times when a DeLorean isn’t quite big enough for your purposes, or in the case of 1986’s Star Trek IV: The Voyage Home, porpoises – really BIG ones. Replace Doc Brown with Dr. “Bones” McCoy and enlist a captured Klingon Bird of Prey (rechristened the H.M.S. Bounty) to do the time traveling and all’s whale that ends whale. 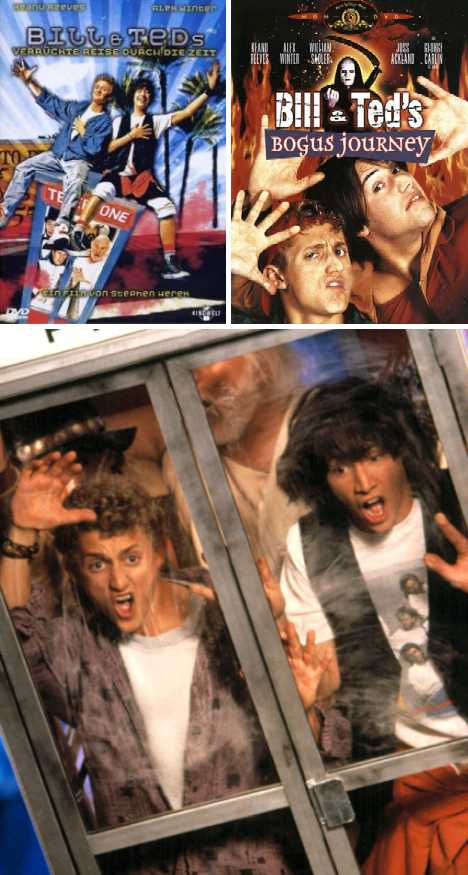 Imagine a TARDIS operated by idiots and you’ve got 1989’s Bill and Ted’s Excellent Adventure, followed two years later by the equally ridiculous, er, excellent Bill and Ted’s Bogus Journey. Their telephone booth-like time machine superficially resembles the TARDIS except for one crucial property: it’s NOT bigger on the inside. 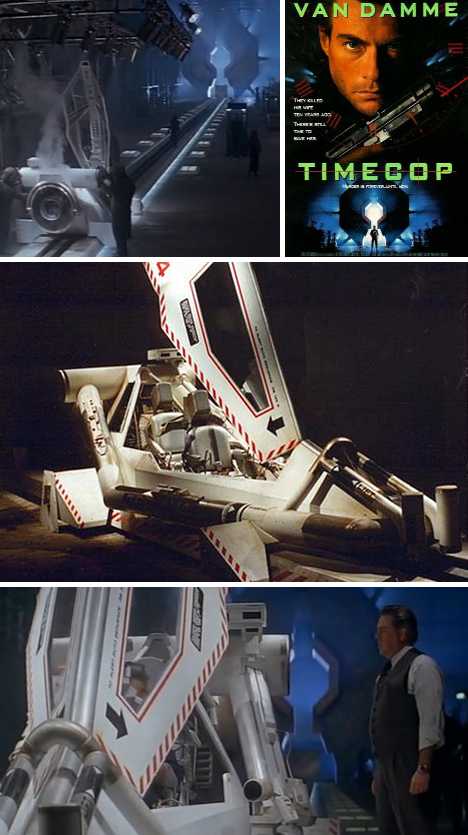 (images via: Alpha Counter, One Click Too Many and GME Podcast)

Jean-Claude Van Damme, the “Muscles from Brussels”, has his detractors to be sure but like him or not, most film fans agree that 1994’s Timecop was one of his better efforts. Naturally, time travel was the central theme of the flick and the time machine used – sort of a rocket sled on steroids – was highly unusual to say the least. Bloodstains on the sled run’s backing wall gave new and chilling meaning to “terminal” velocity.

The Simpsons: Time and Punishment (1994) 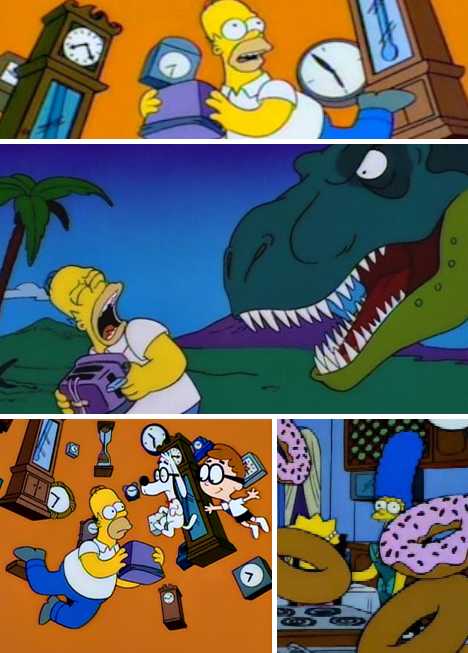 “Time and Punishment” was one of a trio of special episodes that together made up the fifth episode in the Treehouse of Horror series. The story was very loosely modeled on Ray Bradbury’s classic sci-fi short story A Sound of Thunder and we do mean VERY loosely. 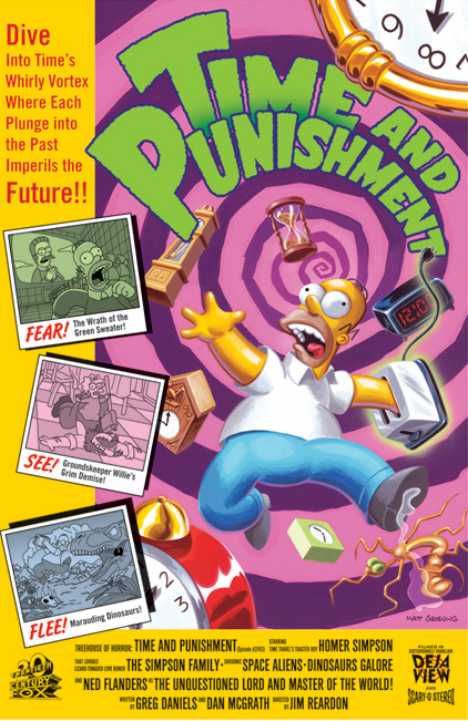 In a nutshell, Homer tries to fix a toaster but fails even more spectacularly than usual, inadvertently creating a time machine. The toaster time machine works fine… Homer, not so much. After swatting a mosquito, giving his cold to the dinosaurs and causing other time-changing mayhem in the past, he finally returns to a world much (but not exactly) like the one he originally left. 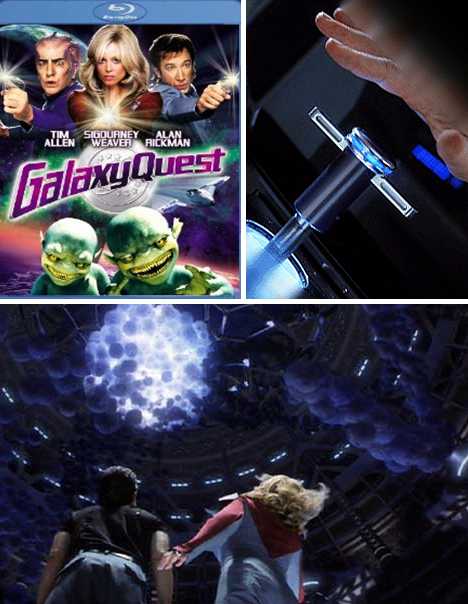 Imagine you’re driving down the freeway and suddenly an 18-wheel semi in the opposite lane veers out of control… a horrific head-on collision is mere seconds away! What to do? Well, if your vehicle was equipped with the spaceship NSEA Protector’s top secret Omega-13 device, you’d just activate it, go back in time 13 seconds, and take the off-ramp out of danger. The 1999 cult classic film Galaxy Quest was riddled with similarly improbable (but highly useful) plot devices but when it comes to getting an interplanetary mulligan you just can’t beat the Omega-13: in the words of Tech Sgt. Chen, “it’s a hell of a thing.” 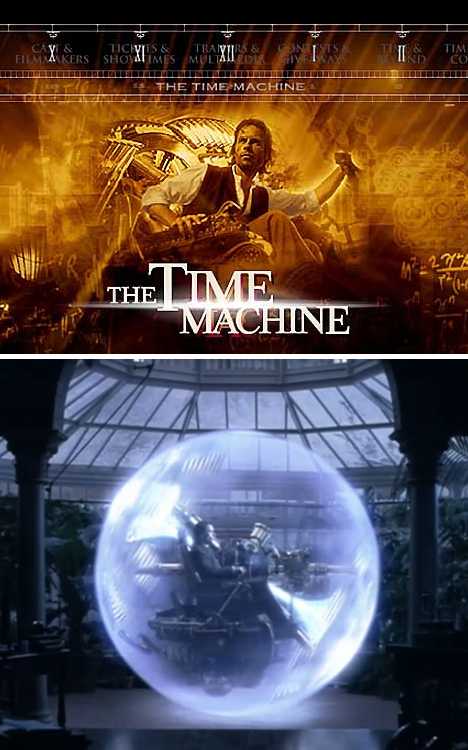 (images via: All Movie Photo and Inkscape)

The 2002 re-boot, as it were, of 1960’s The Time Machine was directed by Simon Wells, great-grandson of H. G. Wells and it’s likely great-grandad would be suitably impressed with the result. Modern critics were less charmed, however, though the special effects are a significant upgrade. One scene of note is the final fight between time traveler Alexander Hartdegen (Guy Pearce) and the uber-morlock played by Jeremy Irons – watch it here. 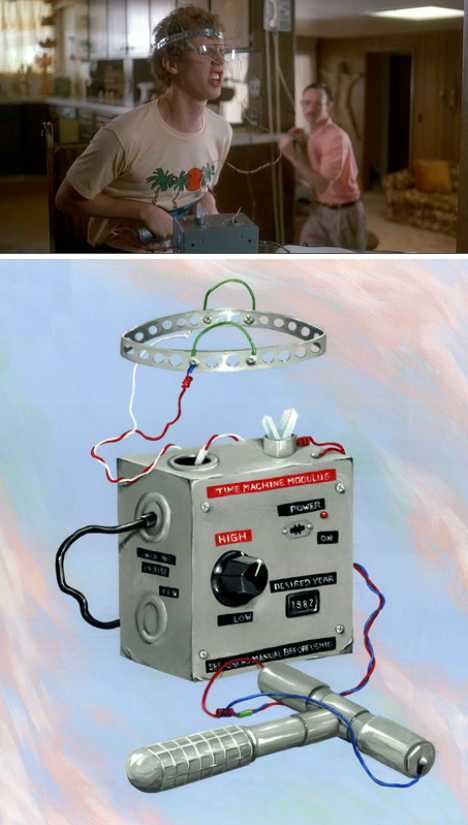 (images via: This Or That and Famous When Dead)

2004’s quirky modern classic Napoleon Dynamite isn’t a time machine movie per se, but it does feature a scene in which one is used… well, attempted to be used. The device is about as low-budget as it gets for time machines, even those bought online that need to have “crystals” inserted before setting the dial for 1982 and flipping the ON switch. Needless to say, the machine doesn’t work but Uncle Rico could have told you that. 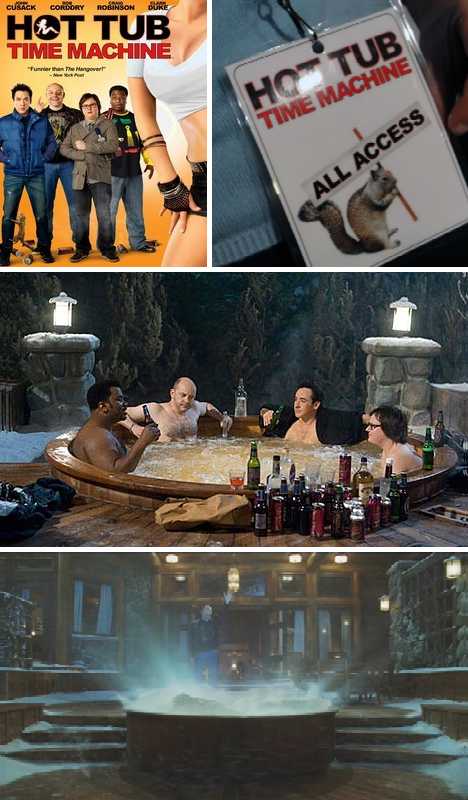 (images via: Tunefind, I Think, Therefore I Blog, The Guardian and AWN)

Well we seem to have come full circle in the time machine comfort zone department though it’s doubtful our original 1899 time traveler would feel all that comfortable immersed in a Hot Tub, Time Machine or not, with four other guys. Then again, it’s not every day one trips back to 1986 when Ronald Reagan was president. “Ronald Reagan, the actor?” Yeah Doc, one & the same. 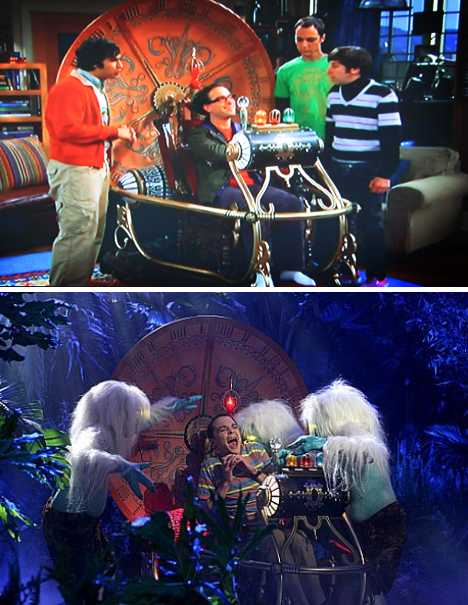 (images via: Free Is My Life and IGN)

Yep, owning a working time machine must be pretty, pretty cool judging from the fantastic adventures enjoyed by a host of lucky TV and movie characters. Then again, the one place time machines DON’T make appearances is on reality shows… or in reality. As Uncle Rico can attest, it’s caveat emptor all the way when it comes to time machines. Odds are your fondest dream could turn into your worst nightmare.