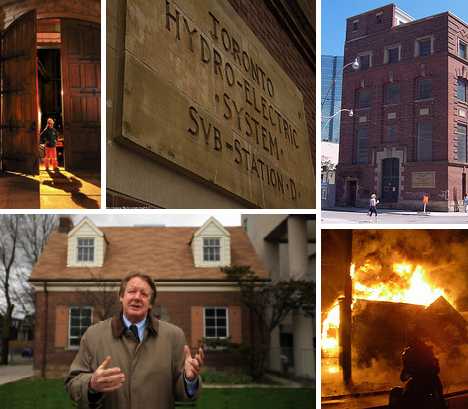 Hiding in plain sight to provide energy and light! That’s not Toronto Hydro’s motto but it could be – for the better part of a century, the Canadian utility’s policy was to design hundreds of electrical substations so that they would “blend in” with their surrounding neighborhoods. Though many have been decommissioned, many more remain. 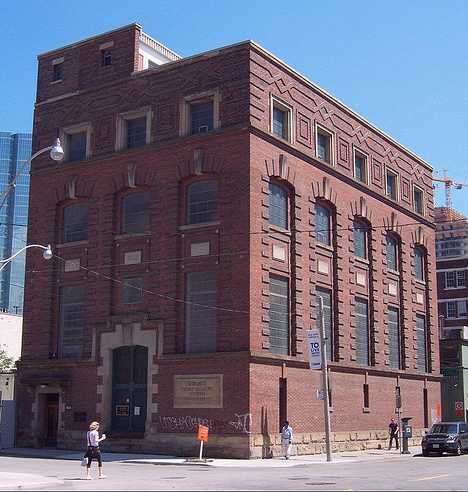 Toronto Hydro was established in 1911, the year in which electrical power from the massive new generators at Niagara Falls first lit up Toronto’s downtown streets. It became quickly apparent that (a) a network of substations was required to complete the emerging power grid and (b) Toronto’s citizens were not amenable to having ugly conglomerations of metal, wire and ceramic resistors plunked smack dab in the middle of their neighborhoods. 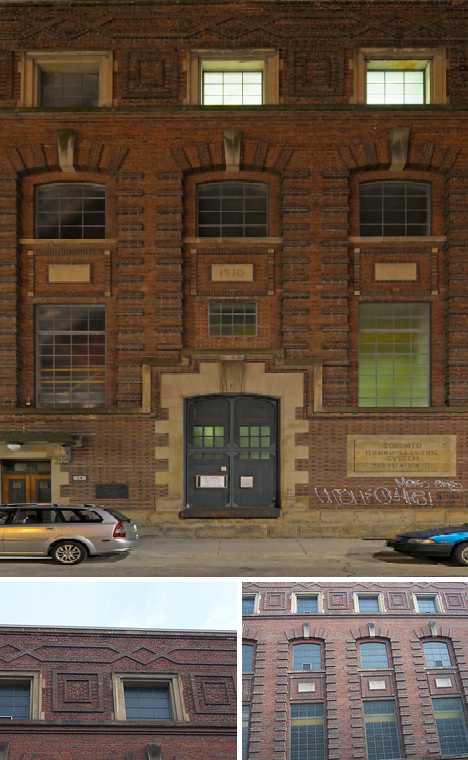 (images via: BlogTO and John FitzGerald)

Toronto Hydro set up an in-house team of unnamed architects whose purpose was to “clothe” the substations in the fashionable brick, masonry and woodwork of the day. The earliest stations, of which Duncan Station at 29 Nelson Street is the oldest (1910) still standing, were generally larger than homes and aped the size, shape and style of Toronto’s fancier office buildings and industrial warehouses. 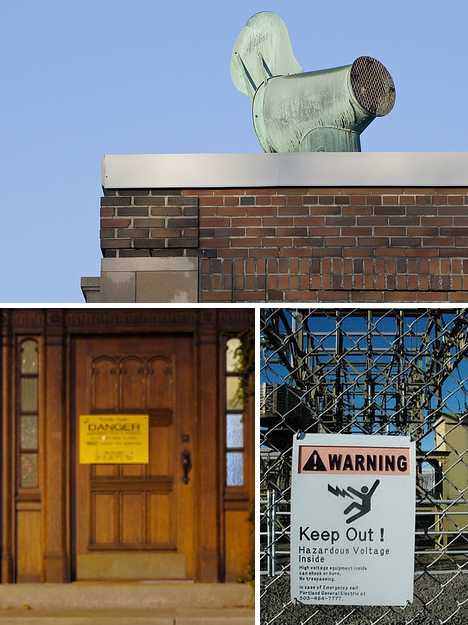 (images via: BruceK and JohnnyGEO)

As these structures weren’t actually homes and businesses, sharp-eyed passersby noted a few differences that immediately set the substations apart… like bronzed, weathervane-equipped exhaust vents on the roof of the 2357 Danforth station (circa-1926) and ubiquitous “Keep Out!” warning signs displayed on all of them. 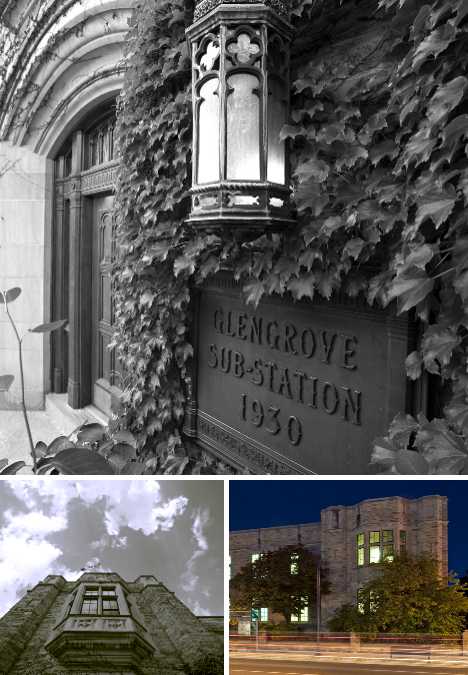 (images via: PhotoSensitive and BlogTO)

Up until the advent of the Great Depression, most of Toronto Hydro’s substations tended towards the grandiose both in size and style. The Glengrove substation at 2833 Yonge Street (south of Lawrence) opened in 1930 and was the penultimate expression of this philosophy. 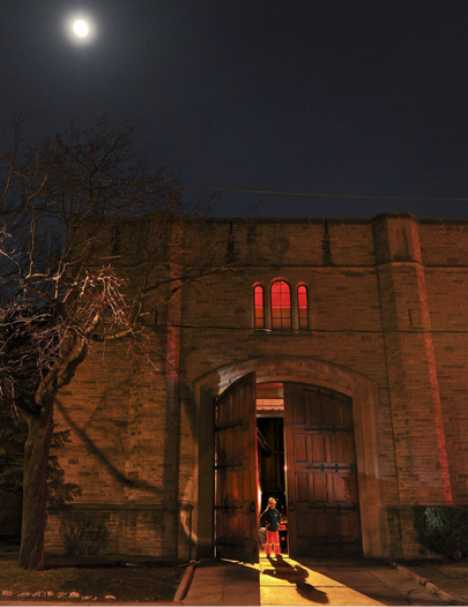 Known colloquially as “The Castle”, the ivy-covered sprawling stone complex would look right at home on an English baronial estate. Oak doors, leaded glass windows and rough-cut stone walls all contribute to a real atmosphere of grandeur made even more majestic when night falls and interior lighting switches on automatically. 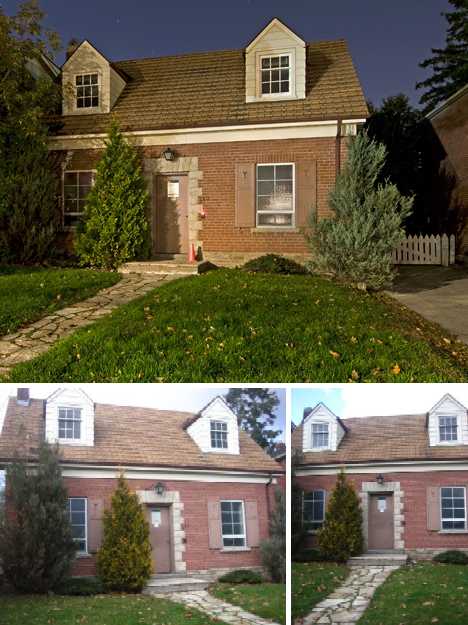 (images via: BlogTO and Alice in Search of a City)

Things changed before and after the Second World War when a more subdued design ethos took Toronto Hydro back to its original mission re the substations: blend them in and avoid obtrusiveness. The new “plain jane” look was driven by economic concerns pre-war; then post-war when Toronto’s emerging suburbs began sprouting smaller, simpler “Salt Box” homes designed for the requirements and incomes of returning soldiers. Plain maybe, but note the white picket fence at 640 Millwood in midtown Toronto. 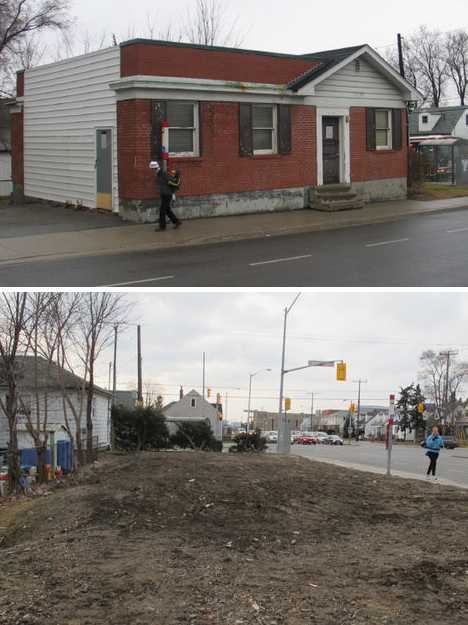 (images via: Toronto Star and TheStar.com)

Ironically, some of these substations have outlived their original neighborhoods and today find themselves standing out like sore thumbs after the surrounding homes have been sold off and knocked down. The sad remnant above stood on the southeast corner of Pharmacy and St. Clair Avenues in east central Toronto for decades until it was finally demolished in late 2010. 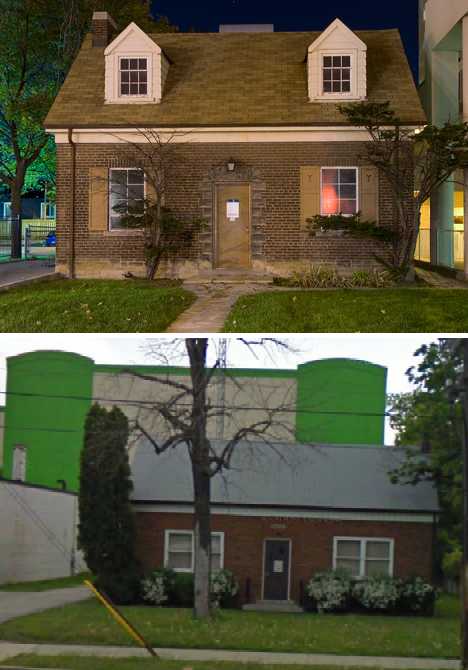 (images via: BlogTO and Google Maps)

We can attribute some of the credit for Toronto Hydro’s suburban aesthetic to one Harold Bodwell, a utility employee charged with the task of designing substations for Toronto’s new neighborhoods. Bothwell not only specified the style of the neighborhood substations but also dictated the grounds be landscaped and regularly maintained. 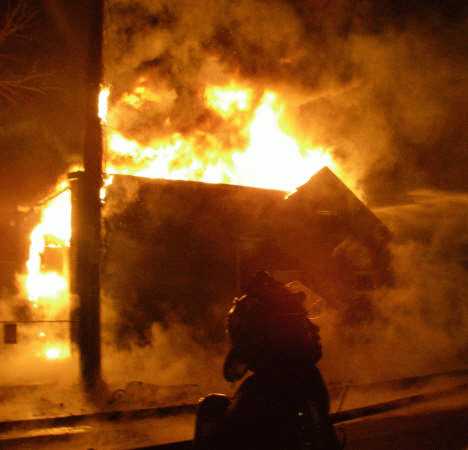 Things don’t always go as smoothly as Toronto Hydro would like and when rare accidents like the transformer vault fire above occur, the substations’ covers are blown sky high. Watch a video of the “event” here. 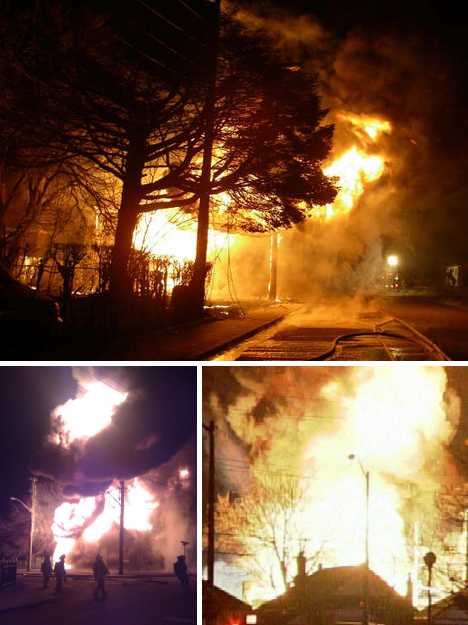 “Transformers are actually filled with mineral oil, no longer PCB’s,” explained TFD Division Commander Andrew Kostiuk, “and if it gets hot enough to catch fire it’s quite a spectacular fire.” So much for being good neighbors. 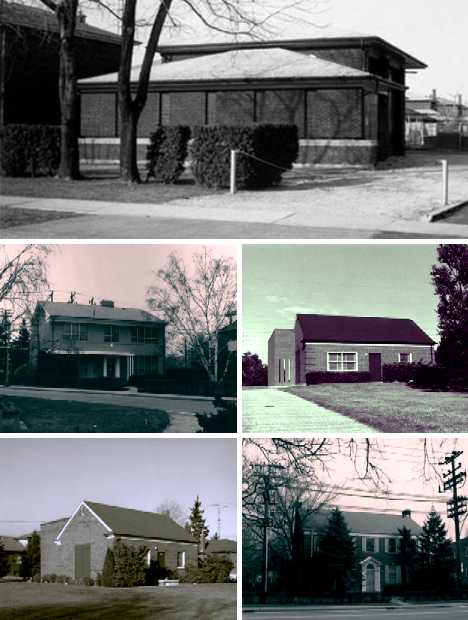 Toronto artist Robin Collyer was the first to document the phenomenon of Toronto’s urban and suburban camouflaged substations, photographing a number of them in the 1980s. Collyer’s use of soft focus and black & white film creates an aura of timeless mystery around these stealthy structures. 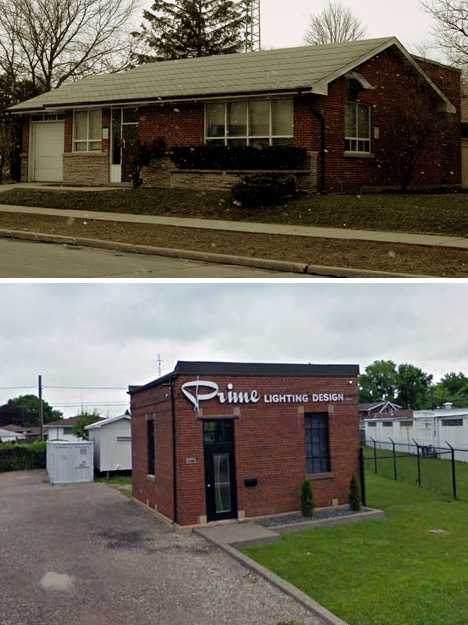 (images via: BlogTO and International Metropolis)

Nearly 300 of these substations were built on residential streets in central and suburban parts of the Greater Toronto Area over a period of nearly a century, and about 85% of them are still in use. Roughly 45 of the substations have been decommissioned for one reason or another and a few have taken on new lives as retail shops – one north Toronto substation is now used by a religious denomination for their meetings others (the example above hails from the city of Windsor) have become small quaint stores. 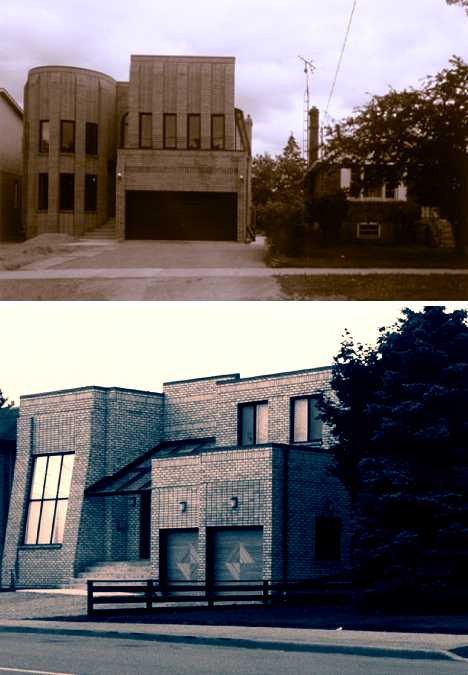 (images via: BLDG Blog and CCCA)

One might say Toronto Hydro’s neighborhood substations are a collective working museum of the past century’s architectural styles and trends. It’s a concept easier said than done: the camo cladding has always come second to the main mission of providing uninterrupted electrical service to Toronto’s varied neighborhoods – a very close second, by appearances. 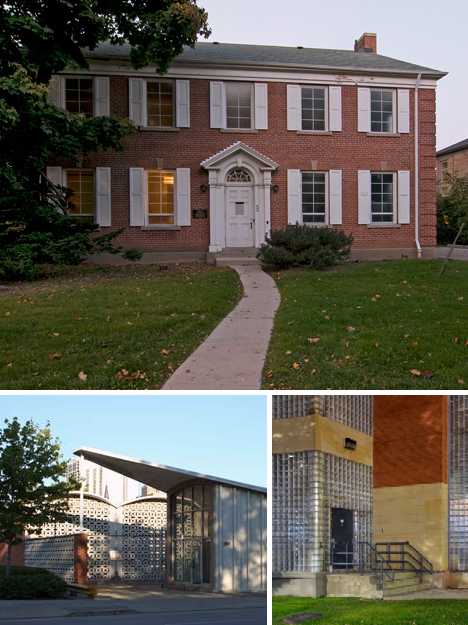 (images via: BlogTO and International Metropolis)

Years and decades pass but Toronto Hydro’s substation designers move with the times, not against them. The past half-century has seen faux-Georgian mansions with gabled windows and triangular plinths above the “door”, 1950s & 1960s ranch style spreads (another example from Windsor shown above) with asymmetrical rooflines, post-and-beam construction and decorative brick screening, and finally post-modernist 1980s styling that eschews brick altogether in favor of organic concrete and glass block accents. 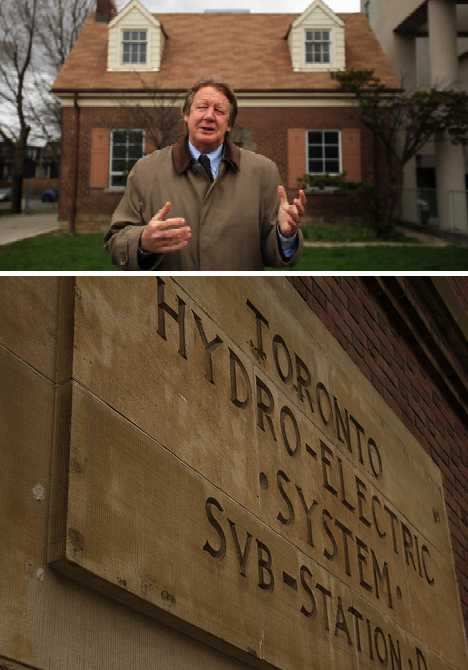 Other Canadian and American cities (New York City comes to mind) have employed urban camouflage techniques to put neighborhoods over infrastructure but Toronto’s record in both quality, quantity and history is particularly outstanding. Though individually these urban & suburban electrical substations are easily missed, together they represent a surprisingly studied effort by a large, faceless corporation to take into account the sensibilities of their residential customers. Shocking, eh?