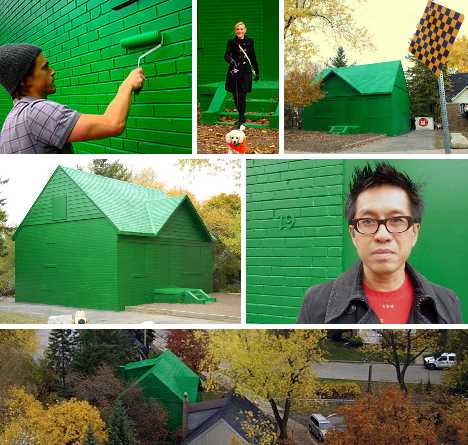 If life’s a game, you’re gonna need some bigger playing pieces. When the game’s Monopoly, you can count on at least one game geek artist to make your larger-than-life board game anything but boring: by building a life-sized, giant green Monopoly House.

Not Your Father’s Greenhouse 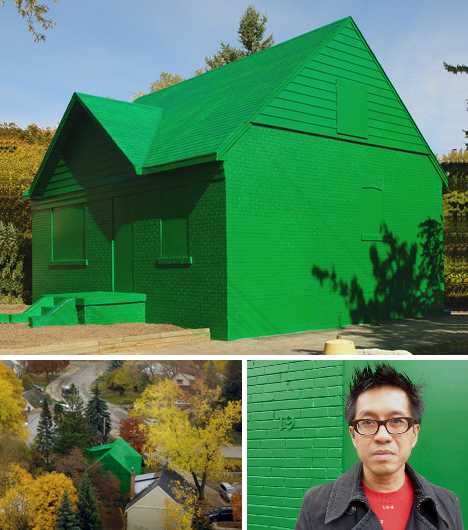 When artist An Te Liu (above) announced he was planning some “green architecture” for the 2009 Leona Drive Project, few expected the result would be a house painted green… ALL green. Yet that’s just what Liu built on a quiet residential street in suburban Toronto. 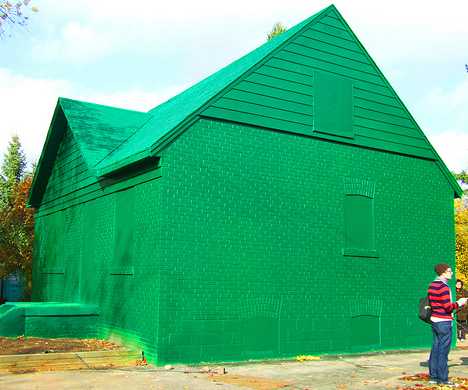 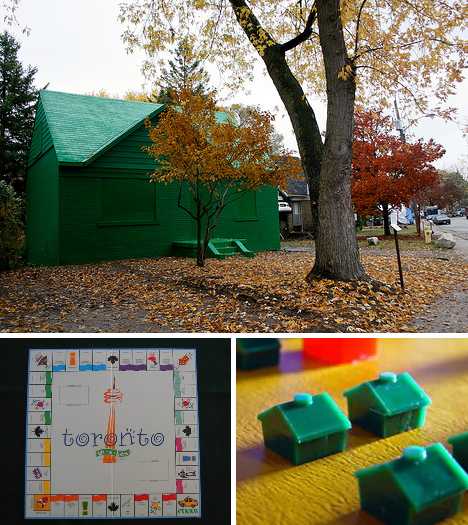 (images via: Kaeko, ‘Lil, Board Game Geek and Property Otter)

Dubbed “Title Deed”, the modified 1940’s “salt box” house was inspired by the iconic green plastic houses players of the board game Monopoly can buy for $100 each and place on their properties, thus driving up the rent other players have to pay. One wonders what other residents of Leona Drive thought about the idea… perhaps something along the lines of “Go directly to jail, do not pass Go, do not collect $200.”

A Home For Art 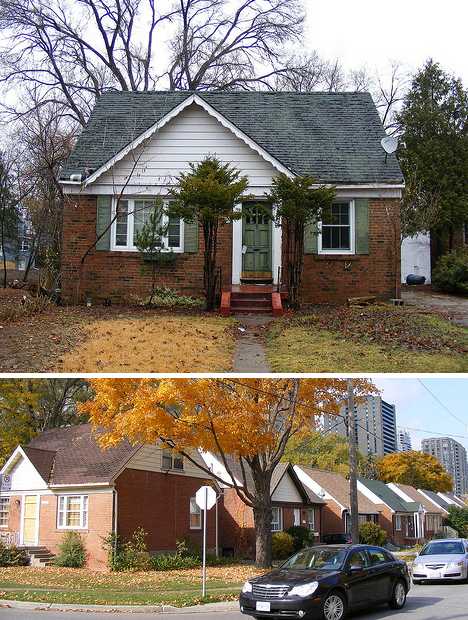 But we’re getting ahead of ourselves. The houses on Leona Drive were built after World War II along with dozens, if not hundreds, of others all constructed in a similar “salt box” style by – coincidentally – the Salter Construction Company Ltd. The homes were economical in both style and cost: ideal for the many thousands of returning servicemen who were eager to resume their peacetime lives and livelihoods. 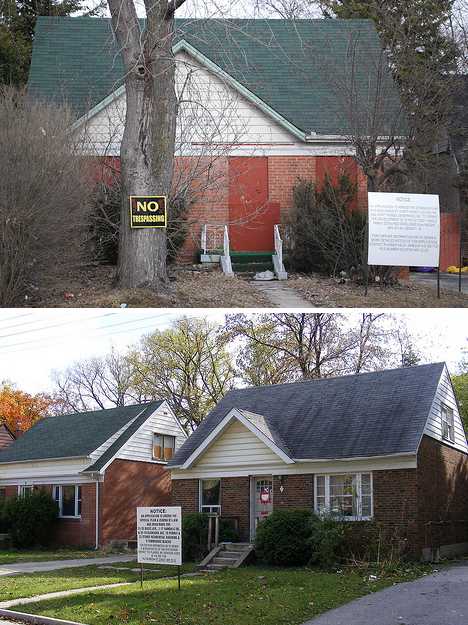 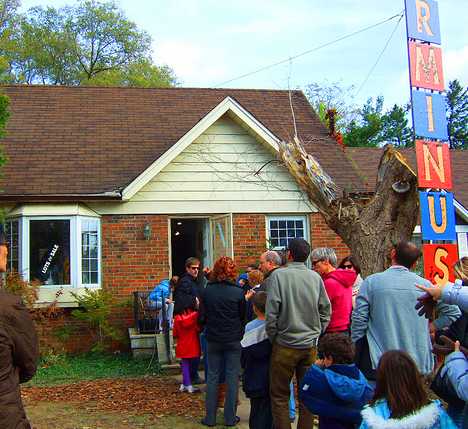 (images via: The Leona Drive Project, Sean Marshall and Kaeko)

Several families called the houses on Leona Drive homes, one for just over 50 years. By the early 2000’s, though, developers began buying up the remaining homes as North York’s expanding downtown extended tentacles into the surrounding neighborhoods. 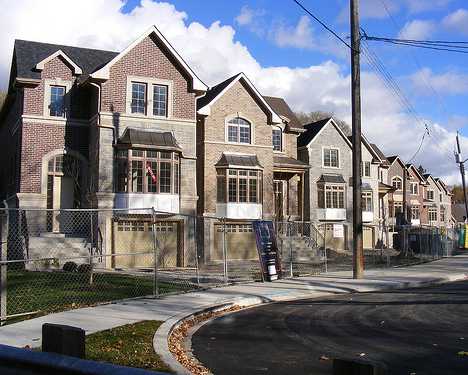 By 2008, a group of homes on Leona Drive was slated for demolition in preparation for a new townhouse development (shown under construction, above). The venerable houses would have one last gasp of notoriety before the wrecking ball swung their way. 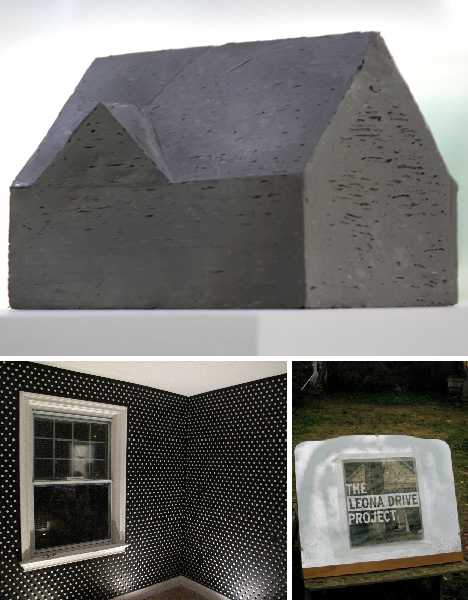 (images via: An Te Liu, View On Canadian Art and Domicile)

The Leona Drive Project was commissioned by the L.O.T. Collective and involved 18 artists who were assigned one house each with which to make a statement on the suburban experience. Artist Ryan Livingstone, for example, affixed 10,000 whitewashed pennies to the interior walls of 9 Leona Drive – he states he was inspired by his grandmother’s frugal maxim, “Save your pennies for a rainy day.” An Te Liu was assigned 19 Leona Drive: that’s his caulk study for the house above. 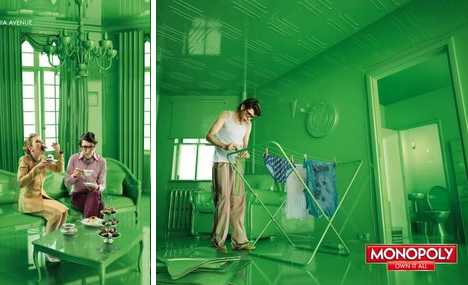 The Monopoly House was never meant to have an interior to complement the exterior, but if it did, we think it might look something like the images above. And you thought Kramer had it bad when the Kenny Rogers’ across the street lit up his apartment with a glowing red neon sign. 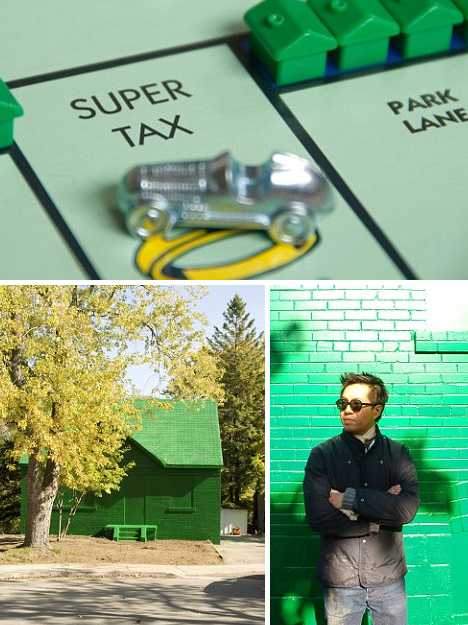 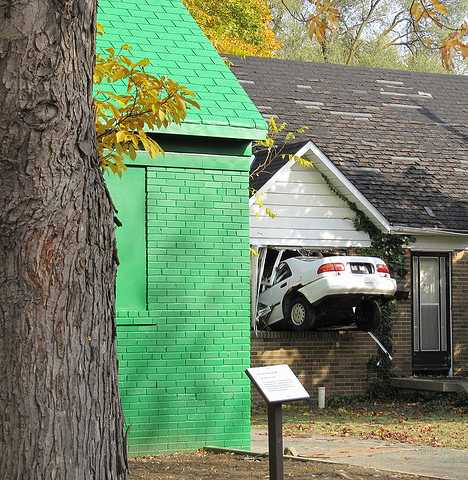 An Te Liu was born in Taiwan in 1967, emigrated to Canada and today runs the graduate landscape and architecture program at the University of Toronto. Liu received his commission to radically remodel the 36′ by 44′ house at 19 Leona Drive in February of 2009, and he was told at the time it had to be complete by early October. The timeline proved to be generous as the house completed its verdant transformation in a mere two months. 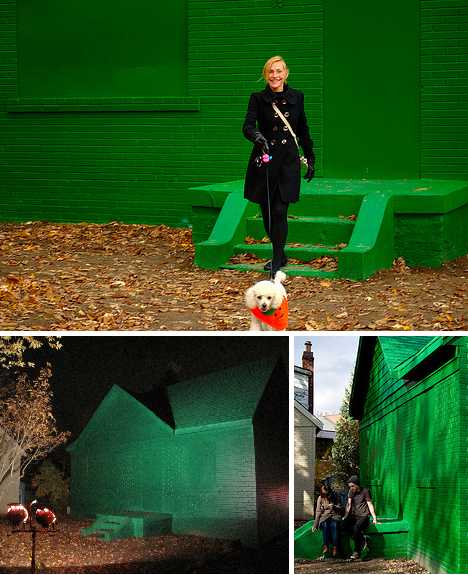 (images via: Ian Muttoo, View On Canadian Art and Uwajedi)

What does it mean? An Te Liu sought to evoke a darker sort of symbolism with “Title Deed”. By blowing up the tiny green game piece into gargantuan proportions, Liu implied that homeowners were powerless pawns in an unseen game played by the nameless, faceless “monopoly men” who orchestrated the 2008-09 financial crisis and accompanying credit crunch.

“Merely Pawns In Game Of Life” 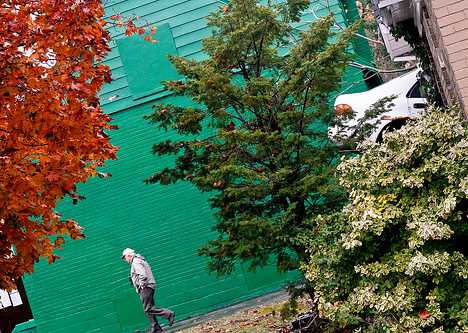 The small and standardized style of the Leona Drive houses was suggestive to begin with. To quote Liu, “I had already seen a similarity beforehand but once we began the process of changing the house using wooden boards for the windows and removing all the exterior extremities, then the green painting could begin.” 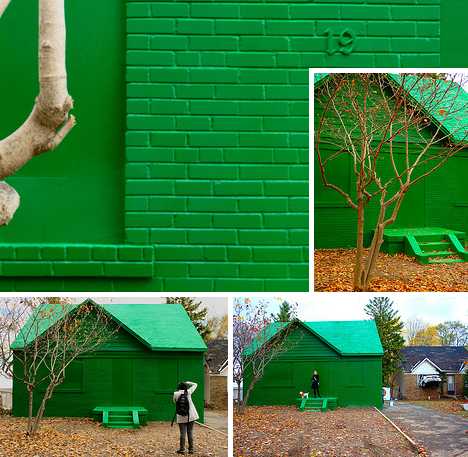 It may have looked and seemed a simple undertaking but the cost of creating “Title Deed” from the house at 19 Leona Drive was in excess of $12,000. Even so, it was a substantial sum considering The Leona Drive Project only ran from October 22 through October 31 of 2009. 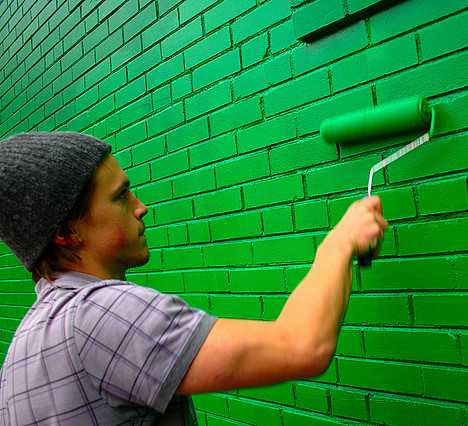 Liu could have simply slapped a coat or two of green paint onto his selected house and saved a pile of cash – and not Monopoly money, either. As one can see, however, the clean, uncluttered look of the house greatly enhances its resemblance to a scaled-up game piece. Exterior protuberances such as TV antennas, satellite dishes and roof gutters all had to be removed. Window openings were blocked off and board cladding was added to smooth the overall look. Last and not least, multiple coats of green latex block-filler paint were applied in order to give the appearance of solidity. 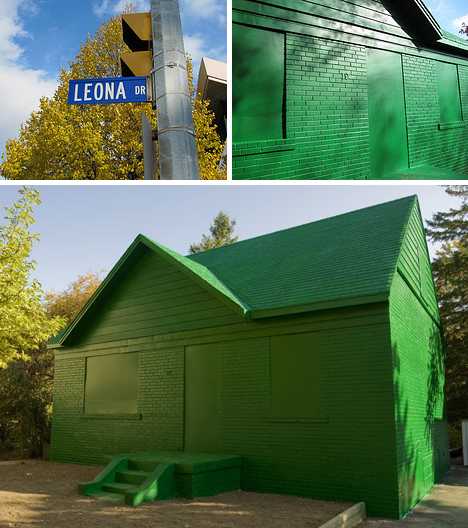 (images via: Loozrboy and Mike Christie)

“We want to think about the 1940s and 1950s suburbs, which had an ideology,” stated Janine Marchessault of York University, who co-curated The Leona Drive Project. “There’s this imagination of a better life that these houses will offer you. There isn’t that utopianism in the new suburbs.” 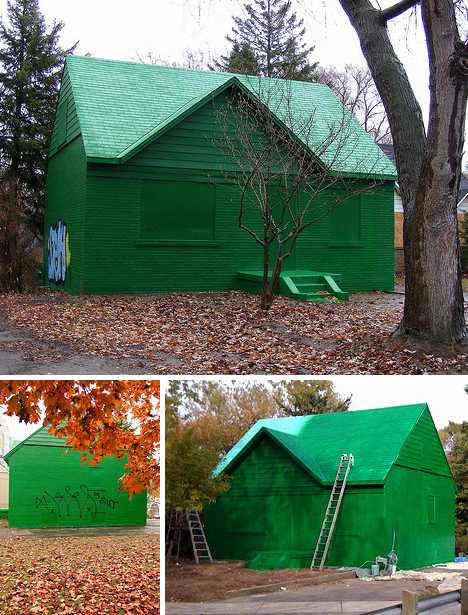 Like all good things, The Leona Drive Project had to come to an end and as October’s autumnal orange faded into November’s steely gray, the houses on Leona Drive faded from artworks to eyesores. It didn’t take long for graffiti taggers to put their own stamp on the Monopoly House’s monotone mask – urbia meets suburbia, as it were. 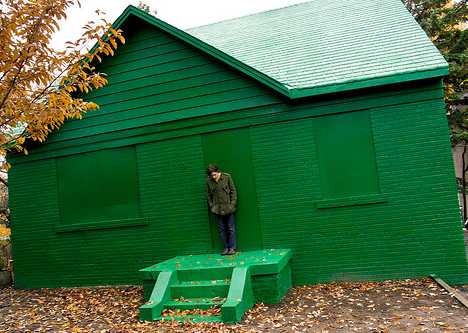 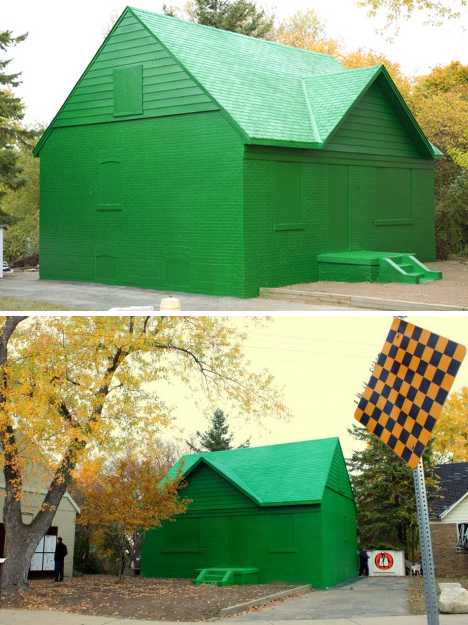 An Te Liu remains philosophical about the part he played in The Leona Drive Project. “Our homes are not necessarily what we think they are,” said Liu. “They are property just like in Monopoly to be remortgaged and used as collateral. Just as the sub prime mortgage crisis hit America and was caused by traders and bankers playing their games in Wall Street, so the common man was squeezed because of that.” 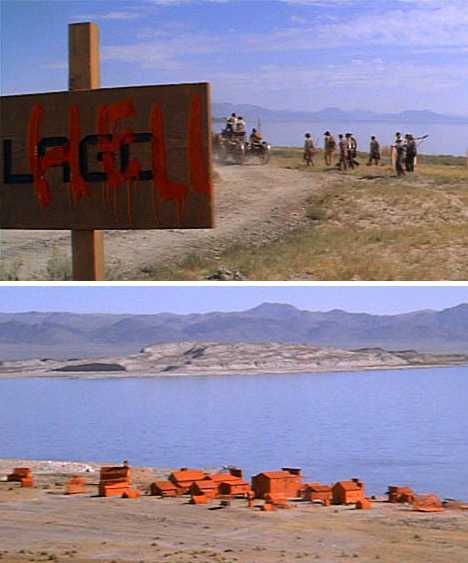 (images via: The Agitation of the Mind and VorMedia.com)

Some witty commentators have suggested the artist build three more life-sized monopoly houses and trade them in for a big red hotel. In response, we’ll just suggest you be careful what you wish for.