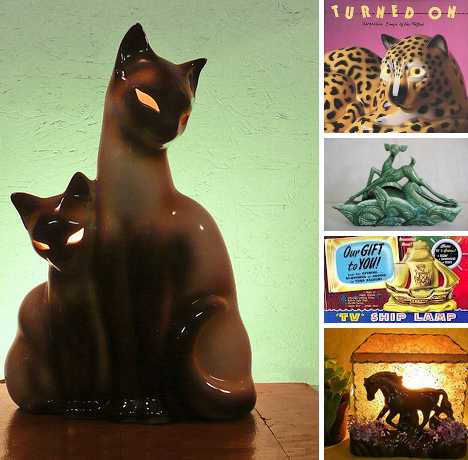 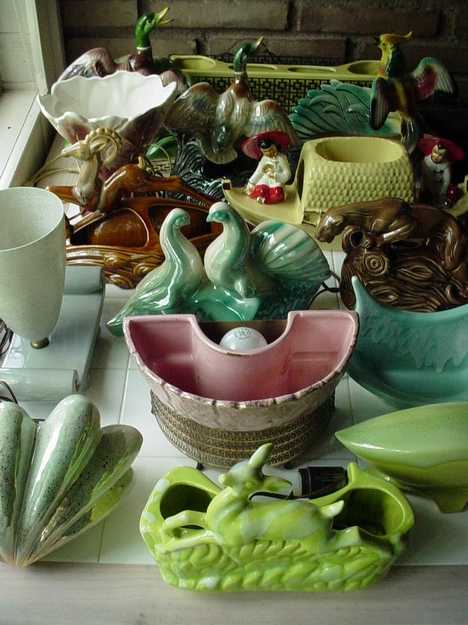 What’s a TV Lamp? The question is a legitimate one today but back in the 1950’s it would have been greeted with “What planet are you from?” amazement – almost anyone who had a TV had a TV Lamp perched on top, and by the end of the Fabulous Fifties almost every middle-class American family had a TV in their living room. 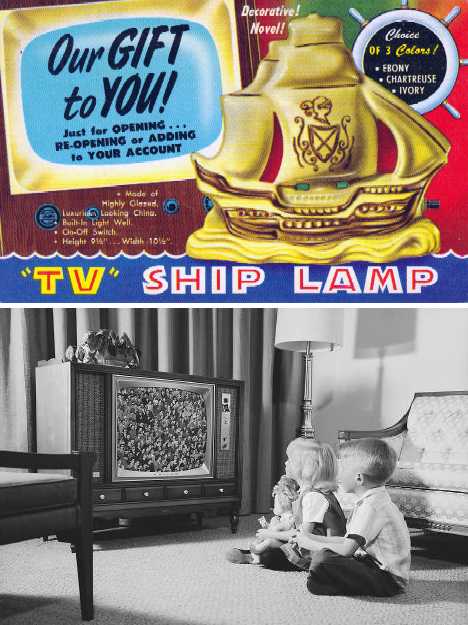 TV Lamps were one answer to the question the Man Of The House was asking as the first primitive television sets took pride of place in America’s living rooms: how will this new entertainment device affect my family? 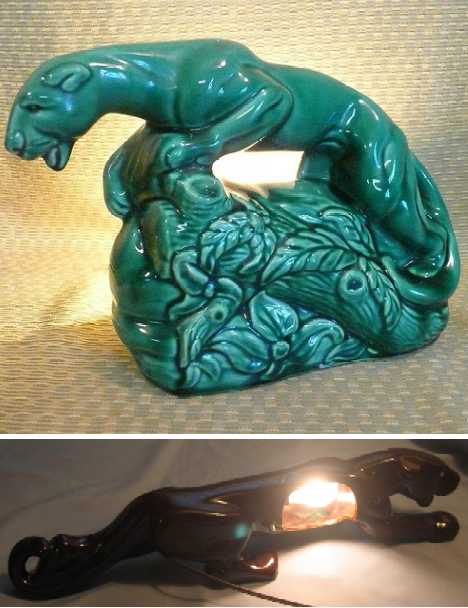 (images via: Lise Vintage Lighting and The Glass Junkie)

The cathode ray tubes in the hearts of those early TV sets put out a low level of luminosity and the natural inclination was to reduce room lighting as much as possible, as broadcast images were easily washed out by bright room lighting. Turn on the TV and turn off the lights… what’s wrong with this picture? 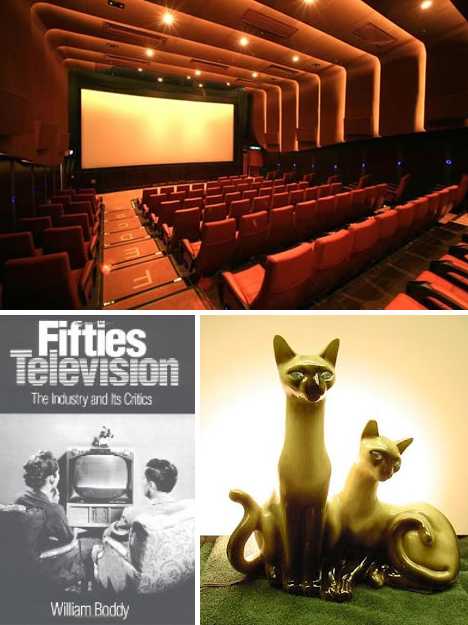 (images via: NewsOne, Amazon.com and BB-Blog)

Another factor contributing to the dimming of America’s living rooms was that people had been watching movies in darkened theaters for decades. Naturally, they sought to transfer the cinematic experience to their private, in-house small silver screens. Movie theaters of the day weren’t completely dark, however, having a range of wall sconces and/or back-lit shapes and shades… lighting unavailable in houses. 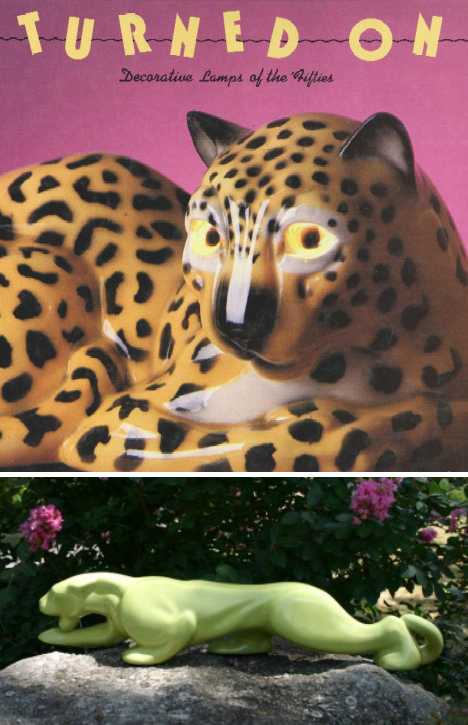 The purpose of this gentle lighting was to protect movie-watchers from eyestrain. TV watchers, however, were watching television much more often than they were seeing movies. As the entire concept of television was relatively new, parents who grew up without it had real concerns about eyestrain (or worse) and were eager to grasp any solution which would alleviate those concerns. 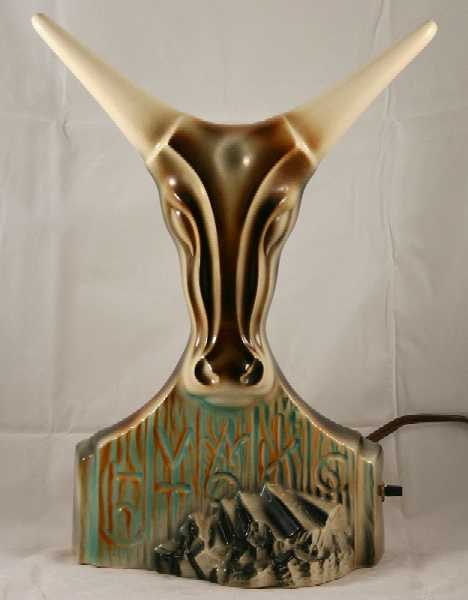 Enter the TV Lamp: a home version, as it were, of those purpose-built theater lamps and lights designed to provide a source of room illumination that wouldn’t detract from the TV-watching experience. The ideal place to install such lighting was, naturally, right on top of the big, bulky TV sets of the era. 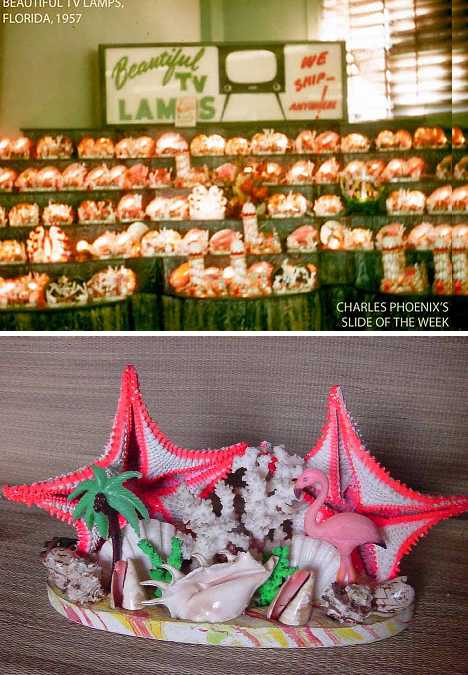 (images via: Charles Phoenix and Millscentral)

The designers of the first TV Lamps were working in the dark, so to speak, as the need for a mass-market lamp providing soft, indirect lighting had never arisen before. The engineering was no big deal but the look of the finished product very much was. 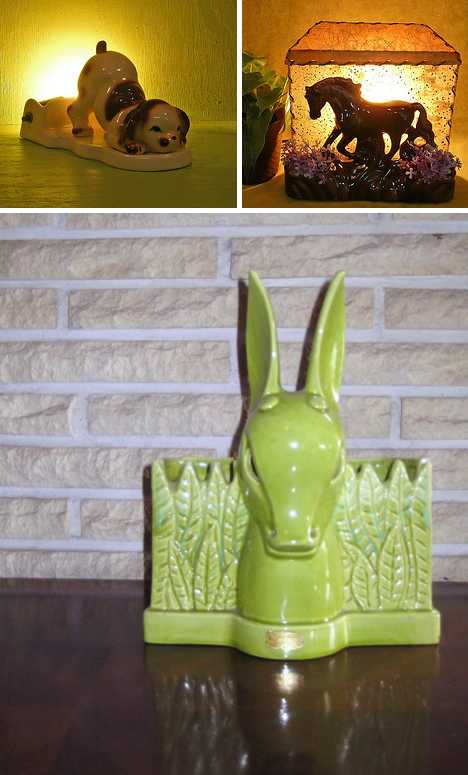 (images via: Lise Vintage Lighting and In With The Old)

Unlike your typical table lamp, TV Lamps had to be more than just a room accessory. Sitting atop the TV – in most cases the most expensive appliance in the home – put these lamps squarely in the spotlight. 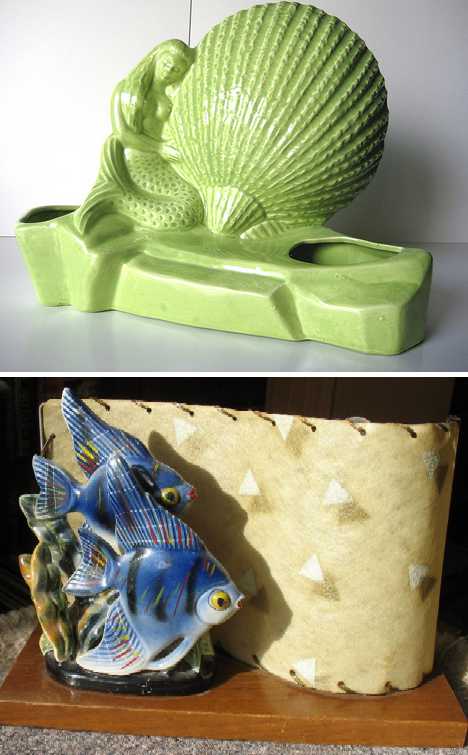 Prop a drab, gauche lamp on your impressive new TV set where it would be squarely in the focus of family and friends? No sirree, that’s one boat that’s not gonna float! 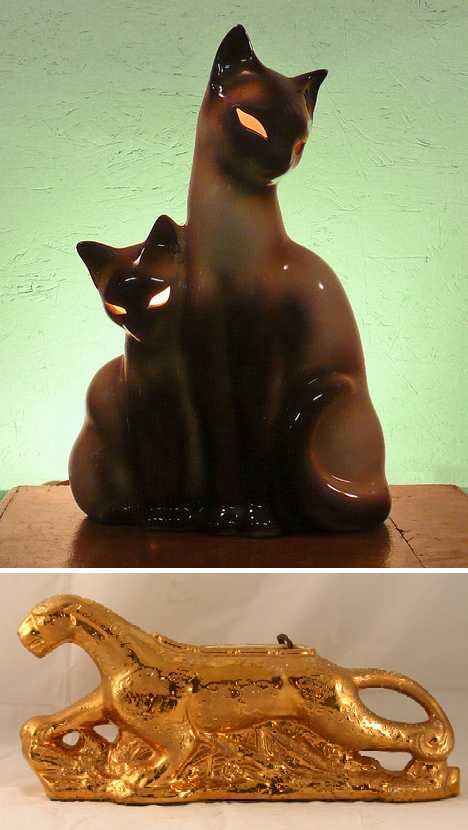 TV Lamp designers had other issues to concern themselves with, mainly being that these were lamps housing incandescent bulbs that were on for hours at a stretch: no meltdowns in front of my nuclear family if you please. 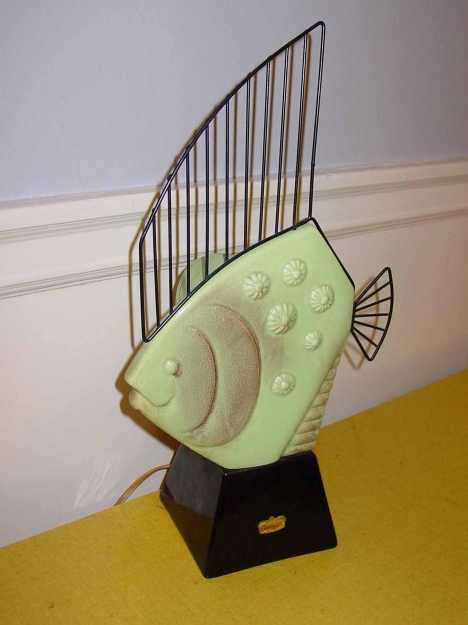 The ideal material was ceramic and a host of pottery-makers such as Rosemeade and Texans Incorporated quickly leapt into this new market niche. 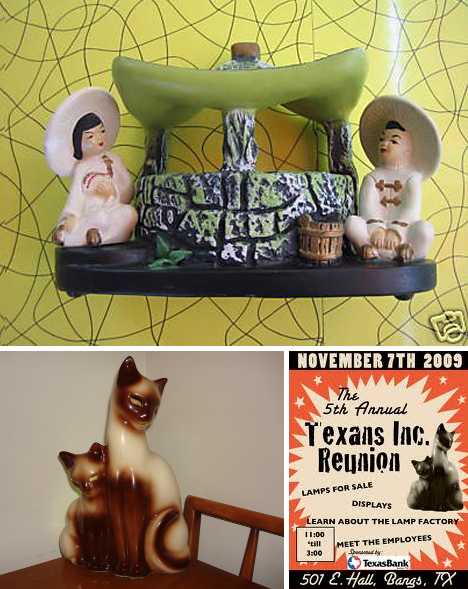 Fired clay and, to a lesser extent, glass offered designers a stable, rock-solid base from which to construct TV Lamps. Being glazed at high temperatures, ceramic lamps would hold their color finishes over time and the flexibility of raw clay (and molten glass) allowed for an abundance subject choices both organic and inorganic, animate or inanimate. 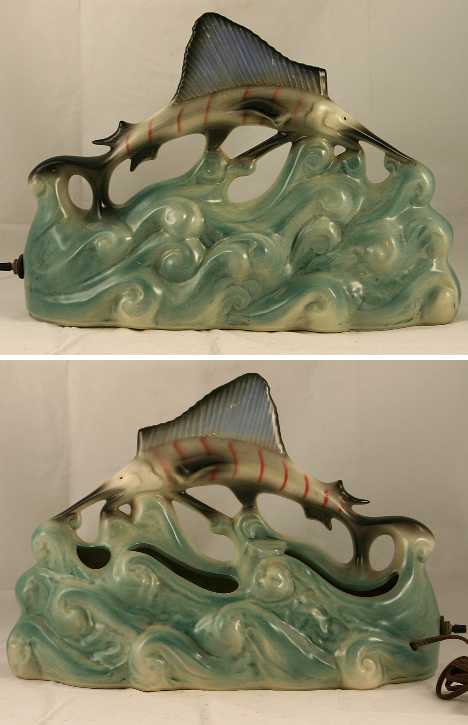 Most vintage TV Lamps are wider than they’re tall, a function of the need to attain a low center of gravity… the lamps were meant to be placed atop 3-ft-tall television sets and consoles after all. Width came into play as a result of size since TV Lamps had to be large in order to properly shield the light source and create a satisfactory scene of back-lighting. 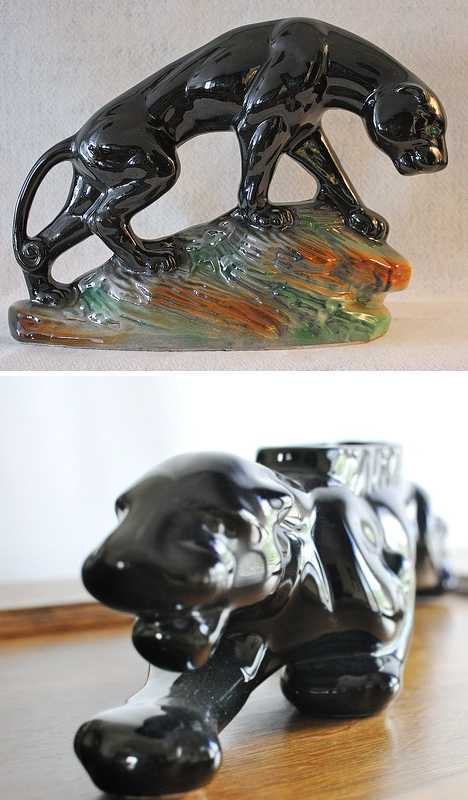 (images via: Tinkers Moon and Etsy/Estatehound)

Looking at some of the more common TV Lamps and with the aforementioned caveats in mind, we can see why lamp designers leaned towards long, lithe animals such as skulking panthers, leaping sport fish and galloping horses. 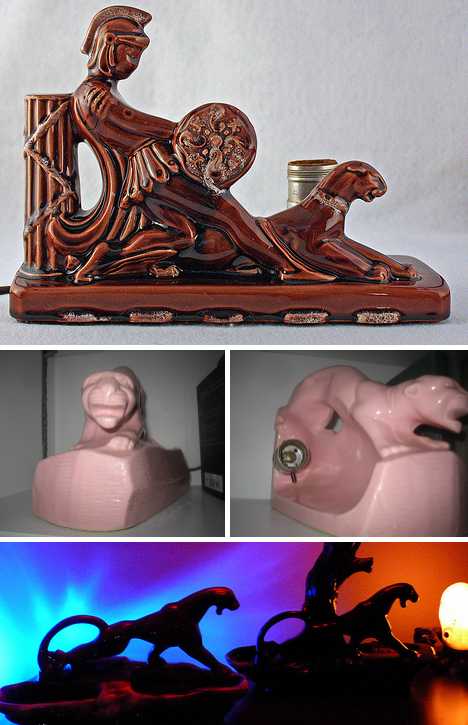 (images via: Tinkers Moon, No Pattern Required and Dancentury)

Panthers were a big hit with both TV Lamp designers and consumer buyers, perhaps owing to the then-current trend for exoticism and tropic mystery. Another point in favor of panthers was that they were often depicted in their melanistic (black) phase, making them look black whether the lamp was on or off, by day or by night. Even so, a few pink panthers made the scene well before Inspector Clouseau took his first shot in the dark. 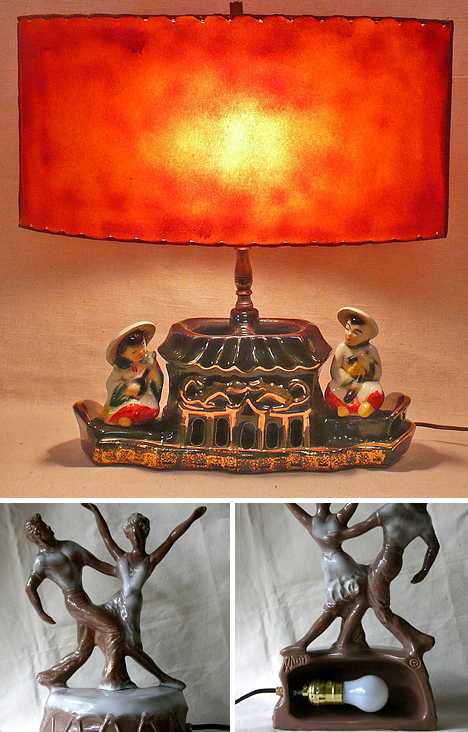 Maritime imagery was also popular since what’s a sailing ship without a wide, wavy ocean to support it? Nautical themes worked especially well with glass TV Lamps as employing blue-tinted glass added to the look of an angry sea while working to dim and diffuse the light of the lamp itself. 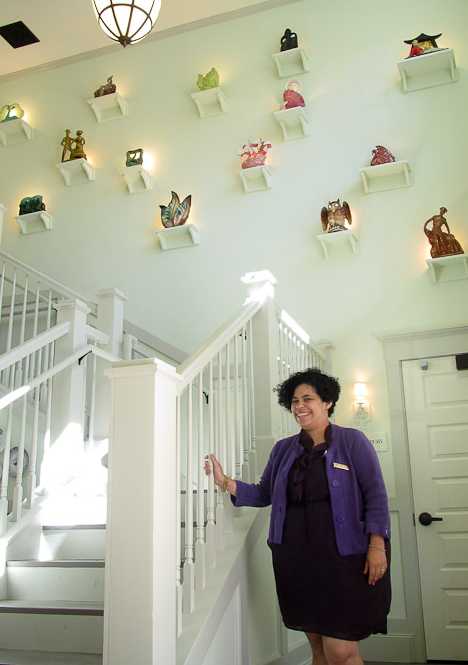 TV Lamps had their moment in the limelight and it was quite a long moment at that, ranging roughly from the late 1940s to the early-1960s. By then, TV sets were being offered with larger screens and cathode ray tube technology had improved to the point where the scenes on the screen could hold their own even in well-lit rooms. 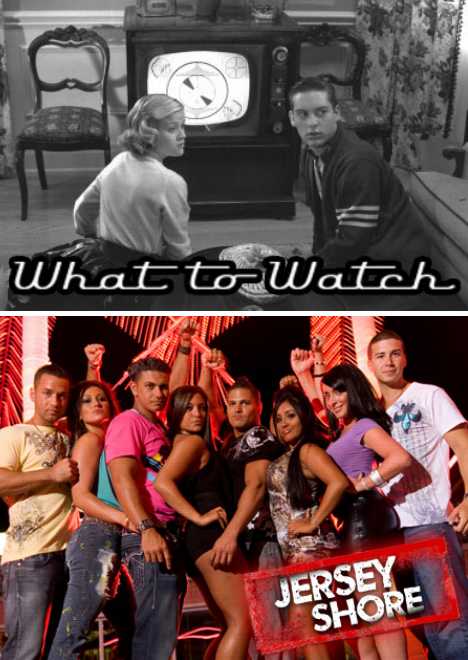 (images via: io9 and Tumblr)

Though TV Lamps had successfully made the jump from functional furnishings to true objects of decorative art, times (and TVs) had changed and the once-ubiquitous décor pieces found themselves falling through a fast-opening cultural/technological gap. Their fall from grace was both fast and furious – notoriety can work both ways. Almost a half-century later, the relatively few survivors are praised by collectors and hailed as essential signposts along the post-war road to modern pop culture. Fifty-seven channels and nothin’ on the TV? Times have changed indeed.