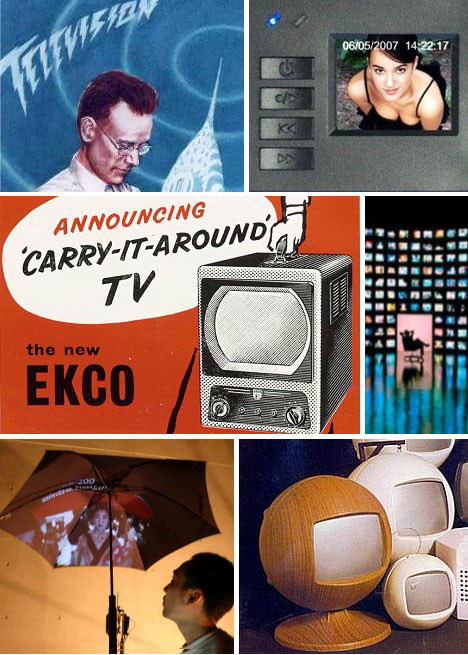 Television exploded onto the social scene as an essential component of Baby Boom culture just over 60 years ago. TV also fostered the growth of geek culture – Star Trek and the Trekkie phenomenon for example. These 10 steps trace the evolution of TV from tiny screens to, well, tiny screens.

We Control the Transmission 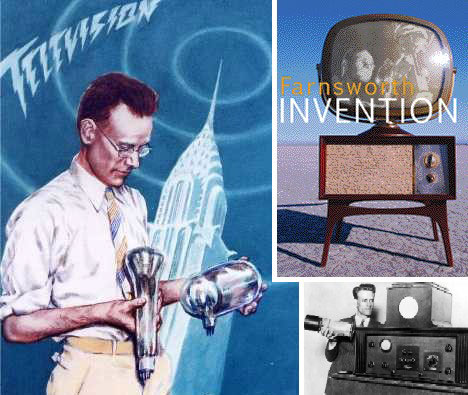 (images via: Newbreen and BC Review)

Though TV wouldn’t become a household word (and social status symbol) until after World War II, actual TV broadcasts began beaming over the airwaves as early as 1928! Not that there were many TV sets around to receive them – the FCC only granted experimental licenses at first so there was little incentive for manufacturers to build and market home sets. We can thank unsung inventor Philo T. Farnsworth (Futurama fans take note) for transmitting the first video image – a single horizontal line – on September 7, 1927. 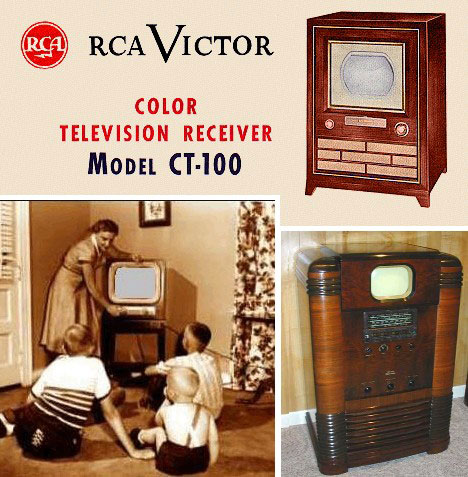 (images via: CT-100 Gallery and The Fedora Lounge)

Early TVs sported icebox-like cabinets fitted with a channel selector dial, a volume knob, an on/off switch and a shockingly small screen. High tech was definitely under wraps, though those old enough can recall peering inside to see dimly glowing vacuum tubes and smelling the scent of ozone. Color TV entered the market with the RCA CT-100. Only 5,000 were made beginning in 1954 but what better way to watch the NBC peacock spread its rainbow wings? 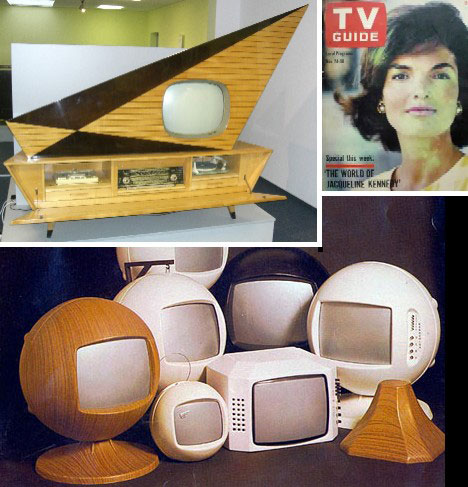 By 1962, television ownership in the USA had surpassed the 90% plateau and designers were exploring the limits of what could be done with the bulky cathode ray tube format. A few bizarre 1950s efforts set the stage for the swingin’ sixties. The Space Age had arrived and with it, Pop Art inspired plastic TV cases in bright colors and organic forms. 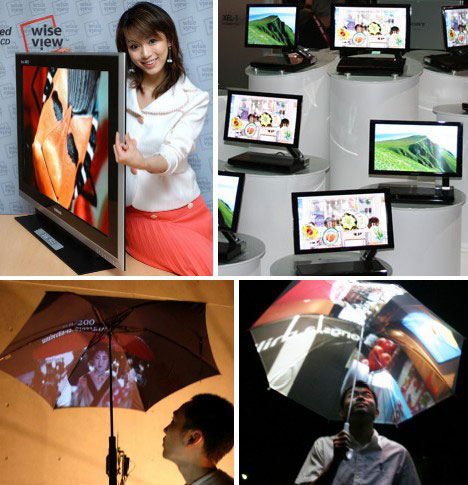 Today’s televisions give designers much more freedom thanks to flat, thin screens and soon – flexible OLED displays. These new technologies will change TVs as we know them: the Pileus Internet Umbrella takes TV in a new direction while providing rain protection. What would Philo T. Farnsworth think? 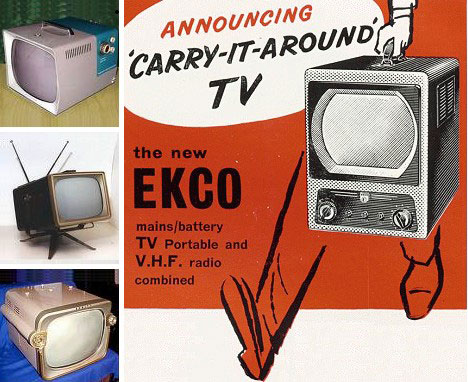 Television hasn’t always been portable, not to mention wireless, but video on the go has always been desirable. Inhibited by the need for a convenient electrical outlet and the heavy, fragile cathode ray tubes, early portable TVs were technological marvels and the pinnacle of coolness for their time. 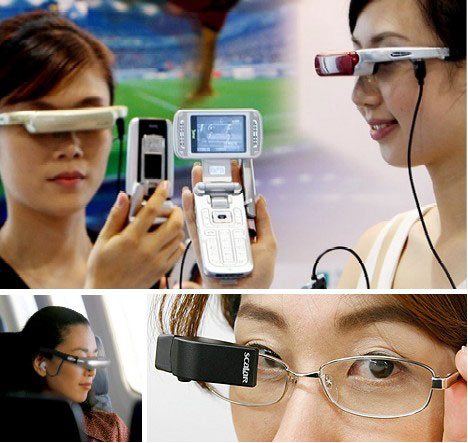 Today it seems TVs can’t get any tinier – and then they do! Forget Farnsworth, Dick Tracy would be impressed by Kowon’s TV eyeglasses. Even smaller are TV tuners that clamp onto eyeglass frames and use one or both lens surfaces as video screens. 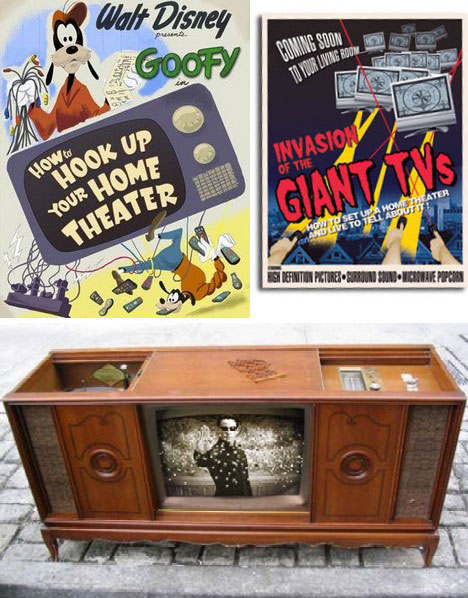 (images via: The Blot Says and Technabob)

Since the earliest days of television, consumers have demanded ever-larger screens along with better, more realistic sound – in other words, a home video experience that rivals that of a movie theater. Early attempts at creating a true “home theater” involved miles of wiring, strategically dimmed lighting or one of those all-in-one stereo/TV consoles that gave wood a bad name. 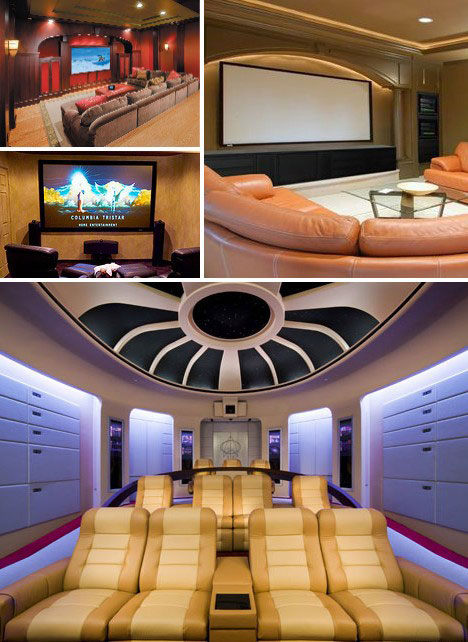 (images via: CanAm and Geekologie)

Today home theaters have been embraced by the masses, who can enjoy big-screen sound & vision on an actual big screen while avoiding high ticket prices, loud strangers and mysteriously sticky floors. Of course, those who are wealthy – and geeky – enough can outfit their rec room to look like the starship Enterprise. Modeled after the Enterprise NCC-1701D from ST-TNG, this ultimate home theater room features motion activated doors and, if the in-laws get to raucous, an alert button that sounds the red alert warning. 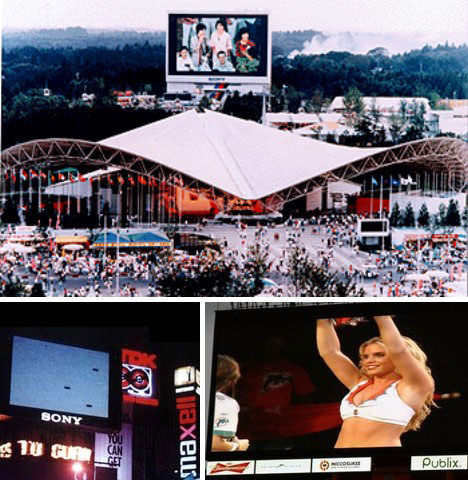 The world’s largest TVs are jumbotrons, a now generic name for any huge video screen mounted in a public place. The first of the genre was made by SONY for the Expo ’85 World’s Fair in Japan’s Tsukuba science city. Early jumbotrons used individual small cathode ray tubes set in groups of 3 to 6 per display element. Each CRT was programmed to show one color of each pixel. SONY made jumbotrons up to 2001 before leaving the market sector. 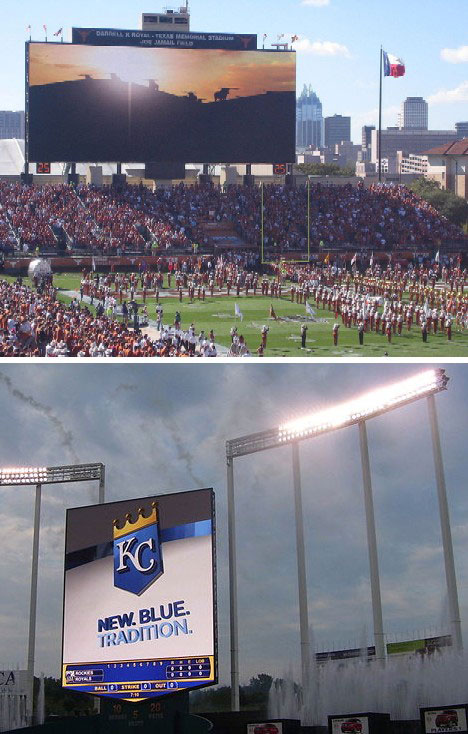 Today’s jumbotrons are a generation ahead of the old CRT-based units, relying on cooler, longer lasting LED lighting. Most of these mega-sized, High Definition screens are made by Daktronics, and include the giant Godzillatron at the University of Texas’ Darrell K Royal-Texas Memorial Stadium. The Godzillatron’s screen is 7,370 sq ft in size, but even that is surpassed by the 8,925 sq ft screen at the newly renovated Kauffman Stadium in Kansas City. 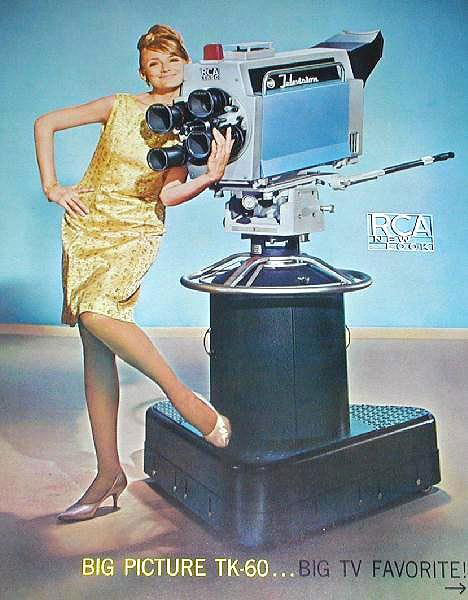 On the other side of the coin, any TV is useless without some sort of camera to capture a video image in the first place. The earliest studio TV cameras were huge, power-hungry beasts that produced prodigious amounts of heat along with grainy video imagery. 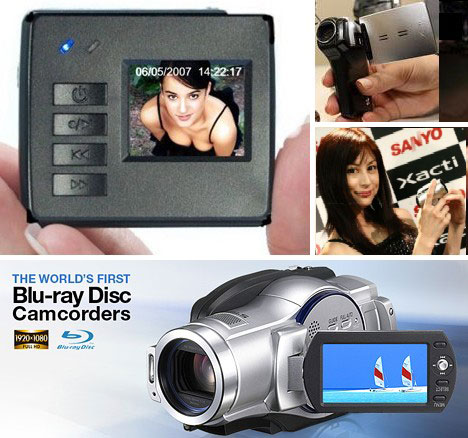 (images via: My Digital Life)

Today’s newest video cameras take crisp, clear high-def video while offering the user a long list of special features and recording options. Of special note is the ultra-small Black-Box DVR which can record video at 30 frames per second, save it on a 4gig miniSD card and do it all using a lithium ion battery.

Save it Now, See it Later 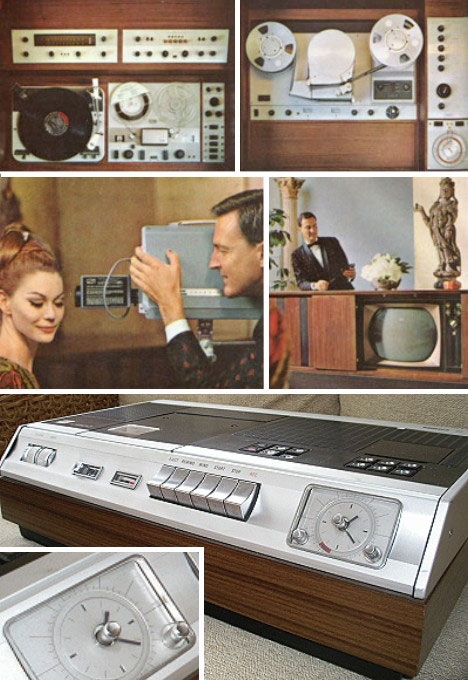 (images via: Kobnet and Rewind Museum)

Storing video for later viewing has also come a long way. Back in 1963, the Neiman-Marcus catalog offered the Ampex Signature V for “only” $30,000. The 9 ft long, 900 lb console included a color TV, though the reel-to-reel video recorder could only process in black & white. A decade later, the Philips N1500 came on the scene as the first domestic VCR. Dig the groovy analog clock! 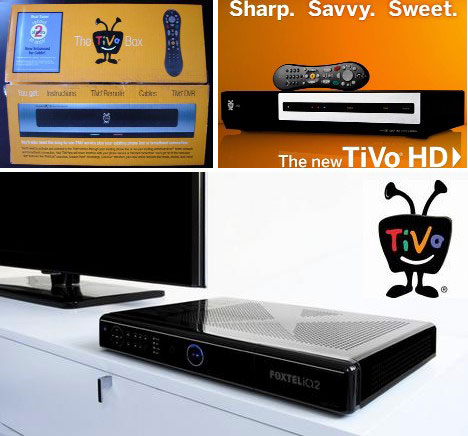 (images via: Engadget and The Age)

Video recorders today use spacious internal hard drives to digitally record and play back video. One of the most popular of the new PVRs (personal video recorders) is TiVo, much appreciated by home users for its ability to skip over commercial ads. Broadcasters are fighting back with their own PVRs that don’t offer the ad-skipping feature.

We Pause for Station Identification 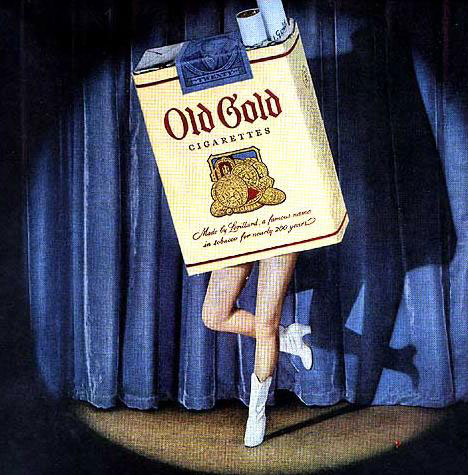 Speaking of commercials, they’ve experienced an evolution of their own. In the early days of TV, one company might sponsor an entire show, such as the Colgate Comedy Hour in the early 1950s. Some of the early shows featured dancing cigarette packs accompanied by dancing matches. Good times! (cough). 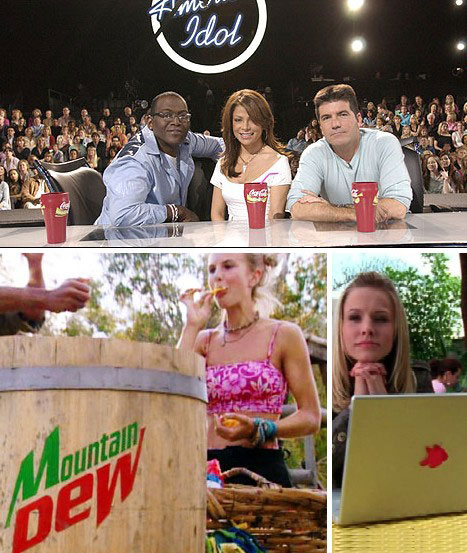 (images via: Cherry Flava and EW)

Time passed and TV commercials lost their ability to captivate audiences – just the opposite, in fact. We program TiVo to skip them, hit the Mute button and run to the kitchen (or bathroom, as the case may be) to avoid them. Advertisers are getting wise to this and are fighting back, mainly through gimmicks like product placements. Not only are they profitable, more importantly they’re (as yet) unavoidable.

TV to Your PC 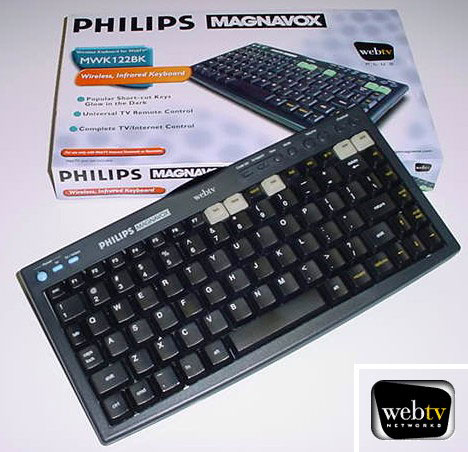 When WebTV burst onto the scene in 1997 it seemed like a revelation – access the Internet on your television! Subscribers got a specialized keyboard & remote control, and were soon marveling over the big, bright, beautiful images their TV sets gave them compared to the desktop monitors of the day. By the early 2000s WebTV was beginning to fade. The company was bought by Microsoft, promotional efforts slacked off, and improvements in monitor quality gradually made the WebTV concept less and less appealing. 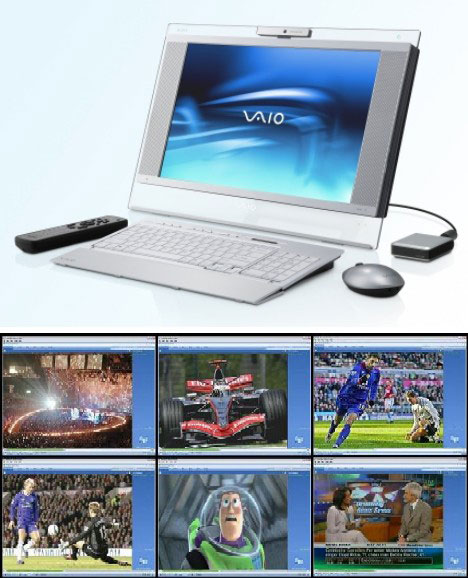 (images via: Core Duo News and TV on the PC)

With the advent of TV tuner cards and software, the entire Internet-television equation has been turned on its head. Computer users can now watch TV on their desktop or laptop PCs. A number of technological improvements have made this possible, perhaps the most important being the ability of users to access very high data transfer rates needed to receive video signals. As the associated technology continues to improve, it threatens to make television as we know it irrelevant.

The Future of Television 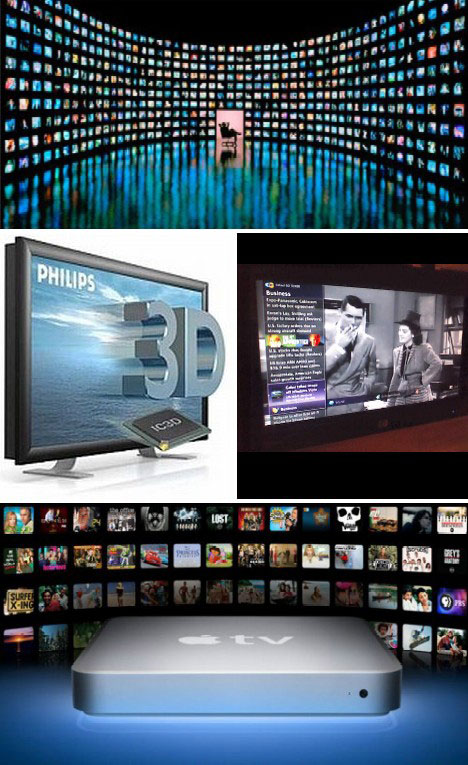 (images via: The Grass is Greener and Otter Group)

What will television be like in the future? Tantalizing hints from emerging technologies give rise to a number of intriguing possibilities. One of these is 3D TV – if it proves practical in movie theaters look for it to come to home theaters. Apart from substance, TV’s future direction may lie in how we access it. The natural progression has been towards greater control by the user, though freedom has its price – perhaps the ones who will one day enjoy personally selected, ad-free video content will be those who have the means to pay for it. Everyone else, stay tuned for this important commercial message!