Nelson Mandela spent the last 14 months of his long imprisonment at the Victor Verster Correctional Centre in Paarl, near Cape Town in South Africa’s wine country. To commemorate Mandela’s release from prison on February 11th, 1990, a bronze statue designed by South African artist Jean Doyle was unveiled outside the now Drakenstein Correctional Centre on August 27th, 2008.

The statue depicts Nelson Mandela’s jubilation at finally regaining his freedom and illustrates his first step towards a prize no one (with the exception of Mandela) thought remotely possible: election to South Africa’s presidency, which he realized in May of 1994. A six-sided platform formed from slabs of black and white marble forms the base of the statue, complemented by short lengths of metal railing reclaimed from actual prison fencing. A smaller replica of this statue, unveiled on September 21st of 2009, stands outside South Africa’s embassy in Washington D.C. where it has become a focal point of mourning following Mandela’s passing. 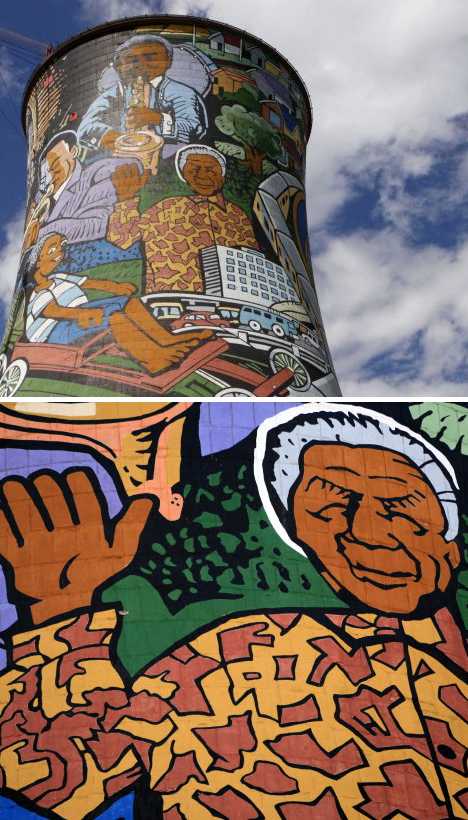 (images via: Seattle PI and Canada.com)

The decommissioned Orlando Power Station in Soweto wasn’t a nuclear-powered facility though the presence of twin cooling towers might cause many to assume otherwise at first glance. In fact, the towers were erected in 1951 and have long been Soweto landmarks – even more so since they were painted in 2010 to help celebrate the country’s hosting of the FIFA World Cup. One tower is reserved for paid advertising while the other boasts South Africa’s largest mural, prominently featuring Nelson Mandela.

(images via: Designboom and Phil Akashi)

To honor Nelson Mandela on his 95th birthday last July, artist Phil Akashi created an artwork rich in meaning and astonishing in its originality. Shanghai, China-based Akashi employed a boxing glove embossed with the Chinese characters meaning “freedom” and punched out 27,000 imprints in red cinnabar paste to form Mandela’s portrait on a city wall. Watch the making of the artwork here. 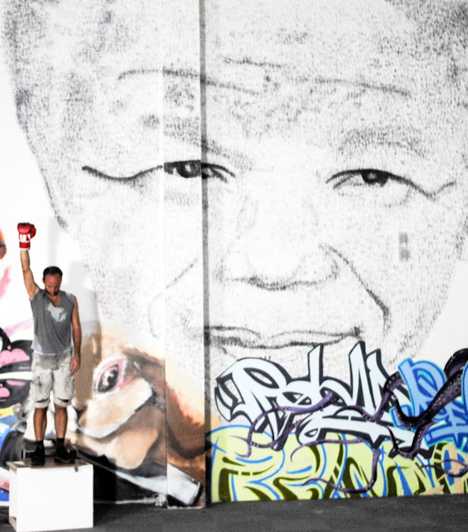 “This artwork exemplifies Nelson Mandela’s 27 years of incarceration but also symbolizes his lifelong brave stand for freedom and equality,” explains Akashi at his website. “Nelson Mandela is an extraordinary artist of peace. He sacrificed his own freedom to fight for the freedom of others and therefore represents a fantastic source of inspiration for the entire world.”