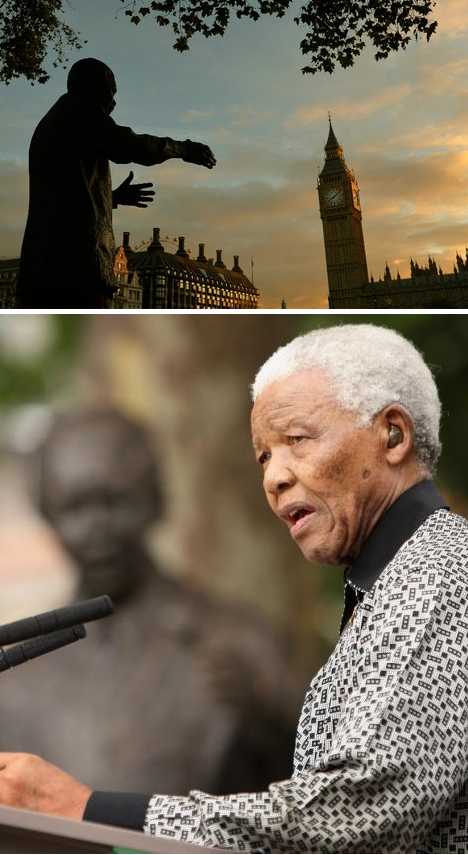 (images via: ITV and UPI)

Sculptor Ian Walters designed this well-known statue of Nelson Mandela delivering a speech that faces the Houses of Parliament in London, England. The 2.7-meter (about 9 ft) tall bronze statue was unveiled on August 29th, 2007 with Mandela himself on hand to receive the honor. 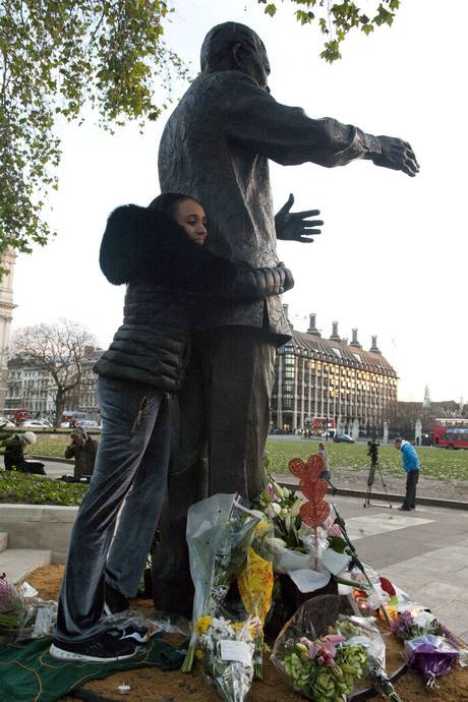 (image via: The Evening Standard)

“The Mandela statue in Parliament Square is now a garden of remembrance for those wanting to leave floral tributes,” tweeted London mayor Boris Johnson following the announcement of Nelson Mandela’s demise. The tributes are indeed being left but those leaving them are reluctant to leave themselves, still drawn by Mandela’s larger-than-life charisma that will linger long after the man has gone.

(images via: NPR and So Happy Together)

From strong bronze to fragile glass: Nelson Mandela is depicted in a stained glass window at the Regina Mundi church in Soweto, Johannesburg. The window is part of a wide expanse of imagery depicting the history of apartheid in South Africa. Mandela is shown at the triumphal moment he was released from prison in 1990, welcomed by friends, family and supporters.

Mandela on the Mountain

(images via: Indiegogo and Inhabitat)

One of the most grandiose Mandela monuments remains in the early concept stage, but what a concept it is! In July of 2013, Ramon Knoester of WHIM Architecture initiated an Indiegogo campaign to raise funding for the Nelson Mandela Centre, a 30 metre (98.5 ft) wide by 60 metre (197 ft) high multistory sculptural building built in the shape of the great statesman’s head. The edifice was to have been constructed halfway up Devil’s Peak, just above Cape Town’s District Six with a panoramic view of Robben Island where Mandela was imprisoned. 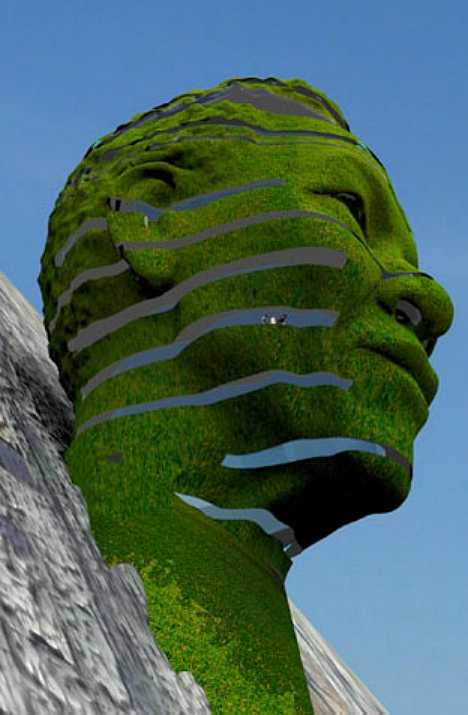 Knoester’s plan was to celebrate both Mandela’s 95th birthday (on July 18th) and his lifetime of accomplishments. Though the two-month-long fundraising campaign fell well short of expectations, the problem may merely have been one of timing. Now that Nelson Mandela has passed on, it may be time to revisit the Nelson Mandela Centre in the context of a reverent tribute and an educational memorial that, like Nelson Mandela himself, casts a giant shadow.