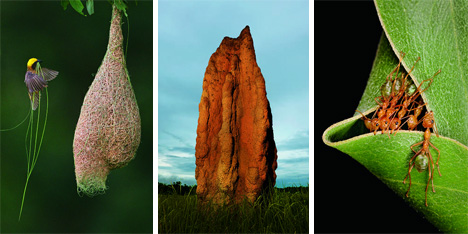 Of all the architectural greats we’ve come to admire – Frank Lloyd Wright, Louis Henri Sullivan, Le Corbusier, and Ludwig Mies van der Rohe , to name a few – they all have one unflinchingly common attribute: they’re human. Nature photographer Ingo Arndt sees the world a bit differently, however. He spends his days photographing the incredible architectural accomplishments of the animal kingdom. In his book Animal Architecture, he introduces the human world to the animals who create stunningly beautiful structures with skills acquired only by instinct. 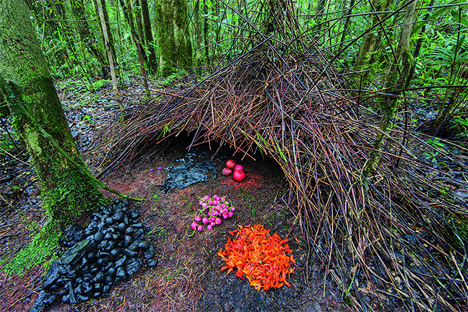 Most of us have seen birds pick up random objects from the ground to weave into nests: blades of dead grass, pieces of straw, and even small objects discarded by humans. This behavior of collecting and building with found materials is more common than you might realize. Above is the elaborate architectural accomplishment of a male bowerbird: a brightly-colored structure built to attract a mate. Male bowerbirds build these towers and decorate them with any colorful object they can find that might catch the attention of a female. Females select their mates based on the elaborateness of the structure, so the males spend enormous amounts of time and energy collecting materials and arranging them in interesting patterns that will catch and hold the females’ attention. Baya weavers (top picture, far left) weave their homes out of fresh grass that they cut with their beaks. Once constructed, the beautiful grass nests dry and harden in the heat, creating uniquely colored structures. 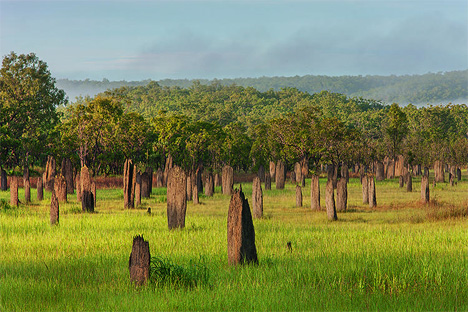 The mere mention of termites can strike fear into the heart of any homeowner, but these little insects are capable of building massively impressive structures. Compass termites build wedge-shaped mounds that can reach up to ten feet in height. Relative to the termites’ size, these structures are almost unbelievably enormous and are usually found in clusters on the Australian plains. The compass termites build their structures in a rigid north-south orientation, the reason for which is not entirely understood by scientists. Similar in appearance are the massive towers of the Australian spinifex termites (top picture, center). These towers can reach a whopping 20 feet high and hold colonies of 3 million termites. The colony works tirelessly to mix saliva with dirt and carry these tiny orbs up to the top to keep building the structure. They even have an established workforce hierarchy, with supervisor termites watching over the workers as they build. 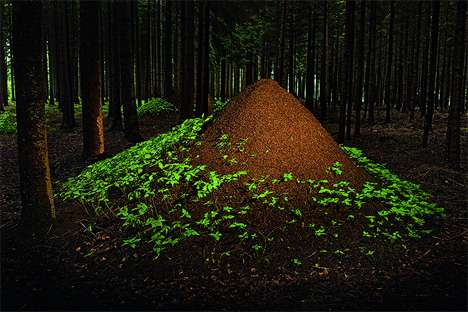 Ants are perhaps the most well-known animal architects. Able to carry loads many times the weight of their own bodies, ants all over the world build impressive hills using nothing more than instinct, determination, and strength. This six-foot-tall structure was created by European red wood ants and is so ingeniously designed that rainwater is diverted when it hits the hill and no water can penetrate the walls. Australian weaver ants (top picture, far right) take a different approach: they build their homes from leaves that they pull together with incredible strength. The ants use the silk excreted by their larvae to hold the leaves together, eventually creating huge structures worthy of commemoration in architectural halls of fame. These structures and the entire series of 120 stunning nature photographs can be seen in Arndt’s book Animal Architecture.