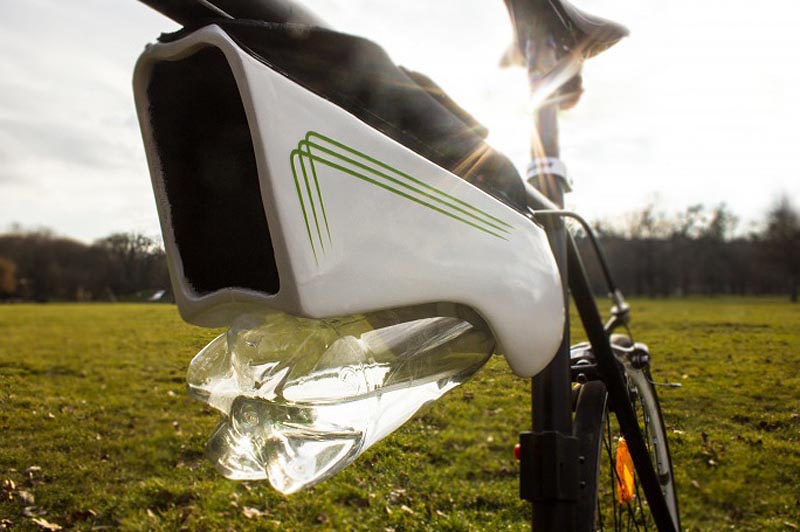 Using air flow and solar energy, this ingenious device creates up to 16 ounces (a half-liter) per hour of drinkable water via condensation as you ride, quenching your thirst just when and where you need it most: while cycling hard in hot and humid climates. 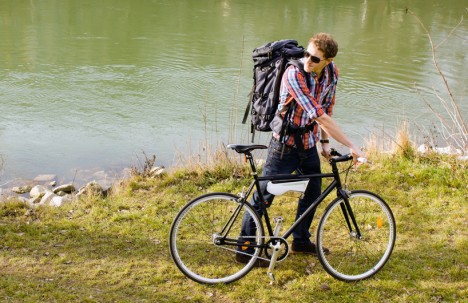 Austrian designer Kristof Retezár has submitted this self-filling water bottle, dubbed Fontus, for award consideration to the James Dyson Foundation. His proposal cites potential benefits both to athletes but also more broadly to regions where obtaining potable water can be difficult (in many cases, these are also places where many travel by bicycle). 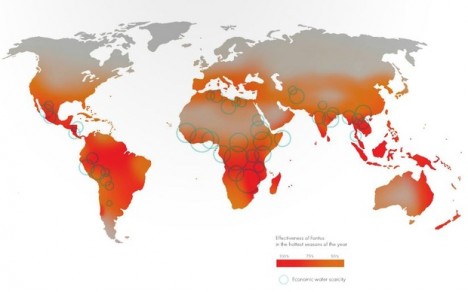 The gadget itself attaches to the frames of bicycles and contains a slot where a standard-sized disposable water bottle can be attached, filled and detached when needed. Retezár experimented with various materials, systems and processes to make a working prototype in his own bathroom, testing under various temperatures and humidity conditions.

How does it work? “Basically, condensation occurs when you cool air to its saturation point. Fontus has a small internal cooler that is divided into two halves. A solar panel provides energy to cool the upper half of the condenser, a process that heats the lower half. When air flows past the heated lower half, it makes the top cool even further. Air moving through the chambers is slowed and cooled to condense moisture, which drips down into the bottle.”

The inspiration: “According to UN statistics, More than 2 billion people in more than 40 countries live in regions with water scarcity. In 2030, 47% of the world´s population will be living in areas of high water stress. Water scarcity may be the most underestimated resource issue facing the world today. Every measure to ease this upcoming crisis is a welcome one.”

For now, it is a work in progress – whether this design hits mass-production without kinks or complications remains to be seen, particularly given the difficulty of distilling liquid water from air moisture. That said, the process does have a long history in various forms. “Harvesting water from the air is a method that has been practised for more than 2000 years in certain cultures mostly in Asia and Central America. The Earth’s atmosphere contains around 13.000 km3 of mostly unexploited freshwater. This project is an attempt to discover these resources. My goal was to create a small, compact and self-sufficient device able to absorb humid air, separate water molecules from air molecules and store water in liquid form in a bottle.”