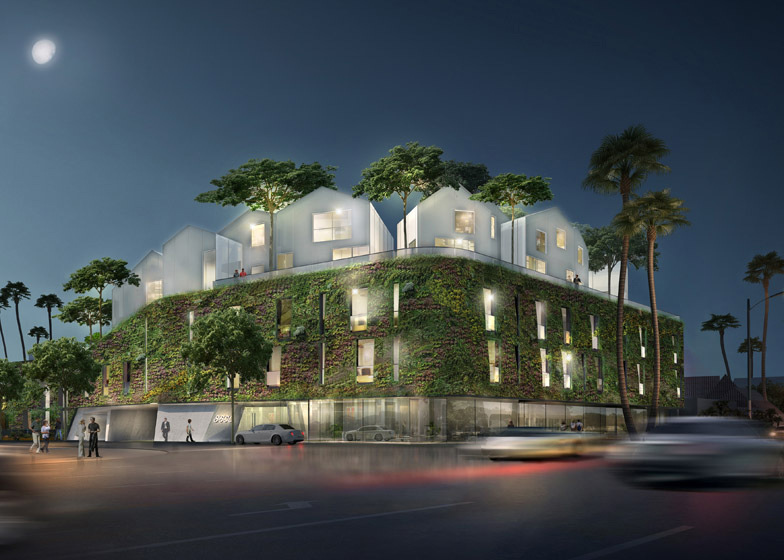 Fittingly enough for a city that’s all about sprawl, this hilltop village concept for Los Angeles combines residential and retail functions in a way that preserves the conventional house-and-yard format rather than stacking it all in a skyscraper. MAD Architects cover a retail building in vertical greenery to transform it into a hilly setting for a miniature neighborhood on its roof. 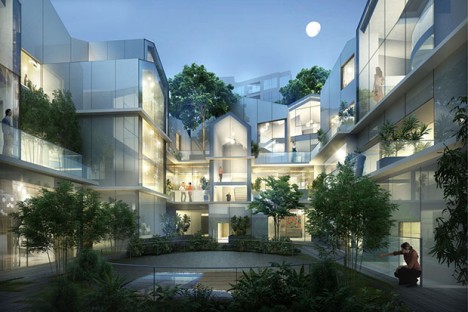 8600 Wilshire essentially distills the visual identity of Beverly Hills into a single development, clustering white living volumes with their own outdoor spaces atop high-end shops with exterior walls covered in succulents and vines. The complex includes three townhouses, five villas, two studios and eight condominiums, though from street level, you can only see the uppermost structures. 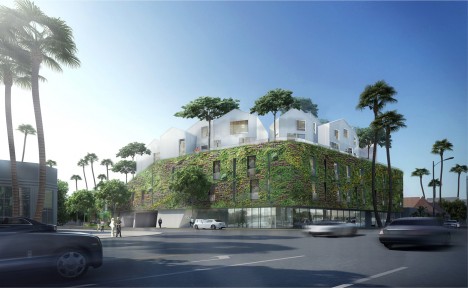 Made of white glass, the living volumes appear opaque from the street, but bear transparent facades facing an interior courtyard set on the roof of the single-story retail space. The green wall mimics both the city’s iconic hills and the tall privacy hedges seen around upscale houses, and replicating the established hierarchy found around the city: expense real estate above versus less-valuable property below. “In high-density cities, Modernist and Post-Modernist housing typically prioritizes functions and formats over human relationships to the environment,” say the architects. “For 8600 Wilshire, MAD considers the possibility of a new model for West Coast vernacular amid the sprawling density of Los Angeles. MAD purposes a harmonious architectural space of human experience by placing residents in the spiritual landscape of nature.”