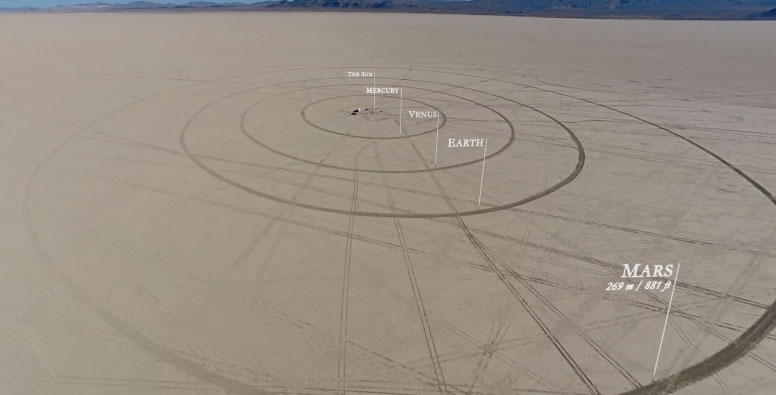 Starting with a model planet Earth the size of a marble, a team of filmmakers set out to simulate our entire solar system in motion and capture the results in a compelling short movie.

In normal images and models of the planets in our solar neighborhood, nothing is too scale – at scale on a piece of paper, planets becoming vanishingly small and effectively impossible to see on the page. Textbooks and other graphics misrepresent sizes almost by necessity simply because it would be impossible to depict things otherwise in a small visual field.

The resulting visuals distort our sense of the distance between celestial bodies. In the scale model featured above, set in the Black Rock Desert of Nevada, Alex Gorosh and Wylie Overstreet give the viewer a much greater intuitive understanding of the separation and size of these spatial objects. 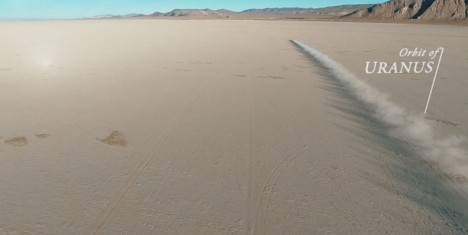 “As we got farther and farther away it diminished in size. Finally it shrank to the size of a marble, the most beautiful marble you can imagine. That beautiful, warm, living object looked so fragile, so delicate, that if you touched it with a finger it would crumble and fall apart.” said James Irwin, Apollo 15 astronaut. He is one of only 24 people in human history have seen the full circle of the Earth with their own eyes. 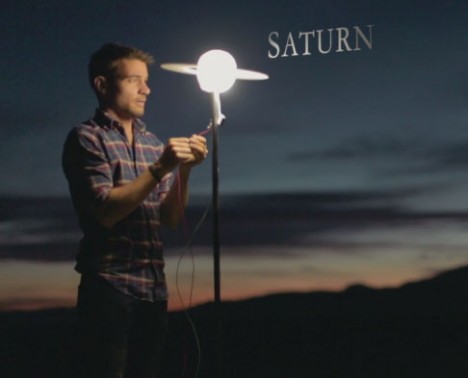 Using LED lights, GPS calculations, a dirt disrupter and ultimately cars driving in circles to simulate the orbits at night, the team created a 1:847,638,000 scale model in which blips of light represent the various bodies in space.

One of the participants climbed a nearby mountain to film it all from above, while post-production overlays create a key for the video. Process documentation was made in part with a drone flying overhead. According to its creators, this is the first scale model of the solar system ever constructed.