The single most divisive architectural movement, Brutalism is harsh, jagged and geometric, calling to mind massive concrete spaceships – and nobody did it better (or stranger) than the Soviets. Some people say that these stark structures, which were most popular in communist countries, are too cold to be beautiful, but they often manage to be both sculptural and unapologetically utilitarian at once. 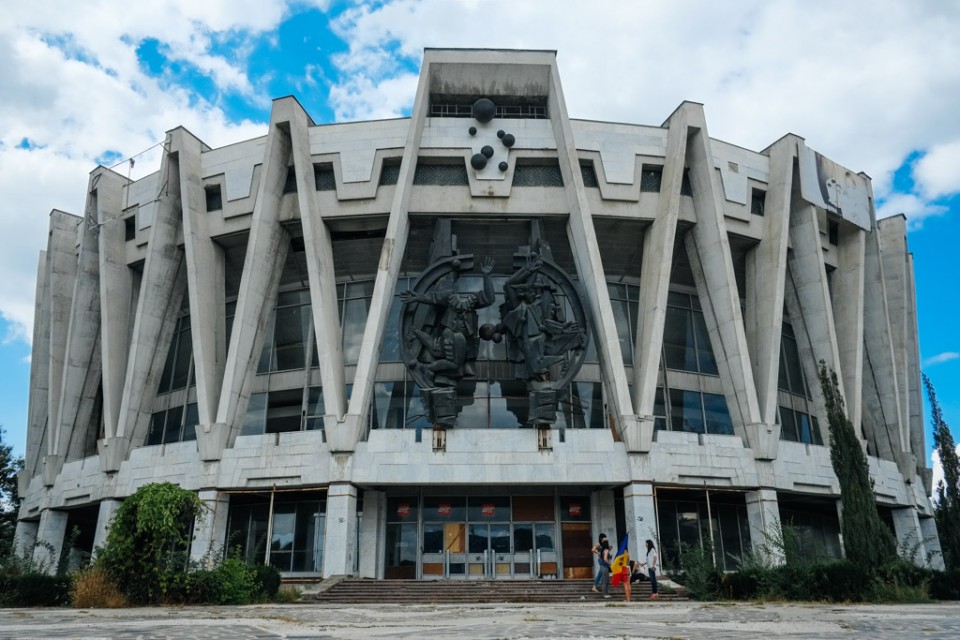 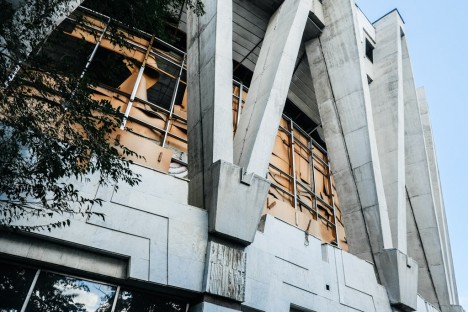 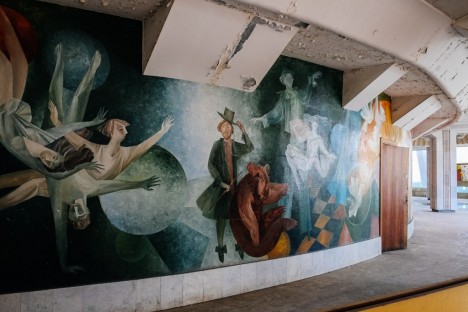 This incredible abandoned circus in Moldova’s capital city remains surprisingly intact inside, decades after a revolution and political upheaval destroyed the small nation’s economy and rendered such structures unusable. Hank Snaffler of Abandoned Journey traveled to Chisinau and got inside, taking a striking series of photographs that give us an idea of just how magnificent the building must have been at its prime. 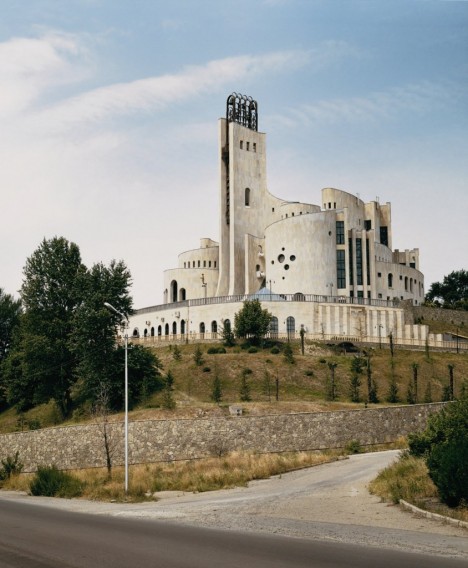 Crowning a hilltop in Tbilisi, Georgia, the Palace of Ceremonies could easily stand in for a mythical castle in a futuristic fantasy movie made in the 1970s. It was built as a secular wedding venue by the Soviets, and still performs that function today. The Palace of Ceremonies is one of dozens of stunning Soviet Brutalist buildings captured on film by French photographer Frédéric Chain for his book ‘CCCP: Cosmic Communist Constructions Photographed.’ Chaubin began traveling throughout the former Soviet Union in 2003, ultimately photographing 90 buildings in fourteen former Soviet Republics. 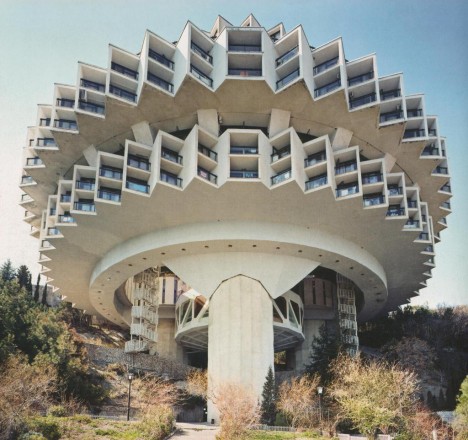 When this joint creation of the Russians and the Czechs was built in 1984 to pay tribute to space exploration, Czechoslovakia was the only nation that had sent a man to space with a Russian launcher. Rising from the ground on pillars, the circular Druzhba Holiday Center was so strange, the United States Department of Defense was worried it was some kind of functioning rocket launcher. In reality, it was just a summer camp. 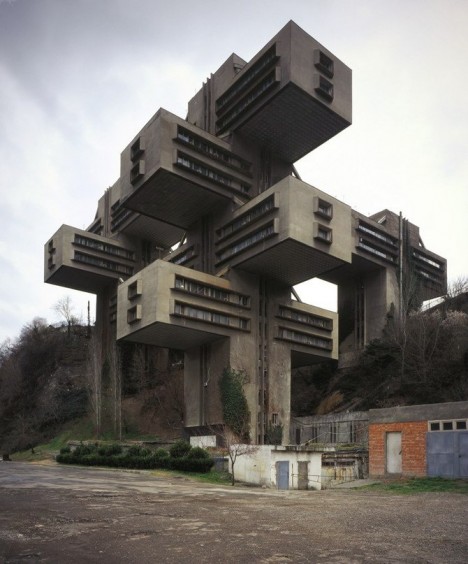 A Jenga-like stack of concrete rectangles looms rather ominously on the outskirts of Tbilisi in Georgia, bringing together Brutalism and Russian constructivism into one strange structure. The 18-story building is lifted off the ground to enable nature to proliferate below it. Built as the headquarters for the Georgian Ministry of Highways, it was abandoned for a while before being renovated by the Bank of Georgia in 2007. 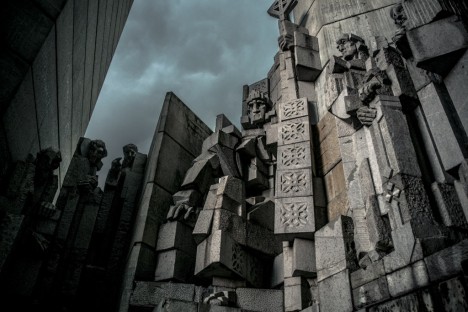 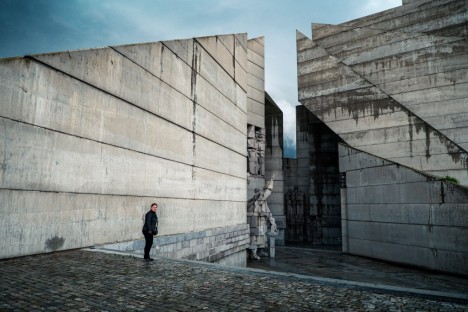 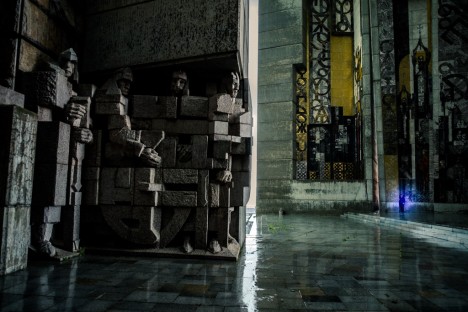 The sheer scale of the Monument to 1300 Years of Bulgaria, especially with all of the harsh lines on those statues embedded into the walls, arguably makes it one of the most impressive Soviet structures and one that will likely still stand as imposing as it looks today many centuries into the future. Towering 230 feet into the air, it’s officially the heaviest Communist monument and has been well maintained. It’s captured here by the blog Yomadic. 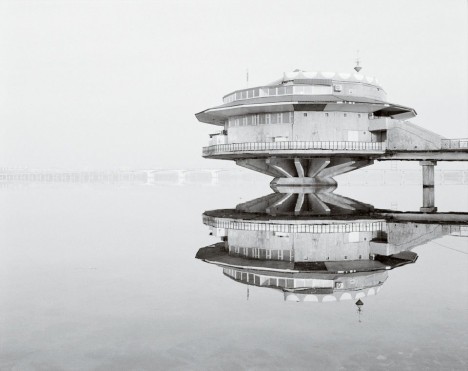 Built in 1976, the Het Ppoplakov Cafe in Ukraine seems to hover above the surface of the water, perfectly doubled in its reflection, looking like nothing more than a flying saucer that has remained stationary and earthbound for decades. 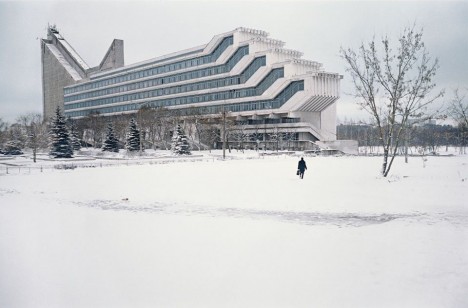 A series of stacked lecture theaters call to mind the decks of a cruise ship in the long and narrow Polytechnic Institute of Minsk in Belarus, built in 1983. 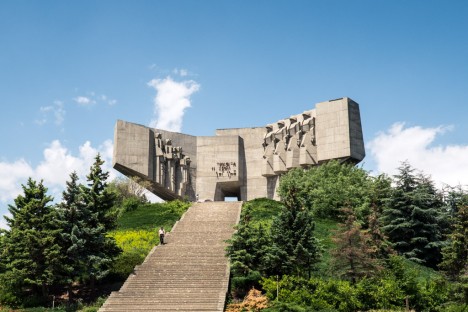 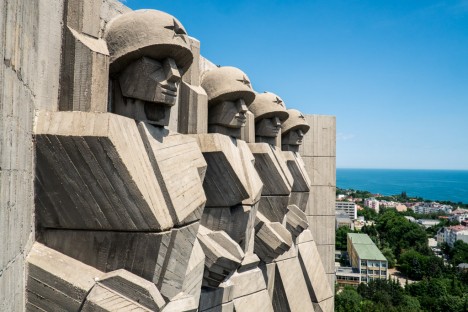 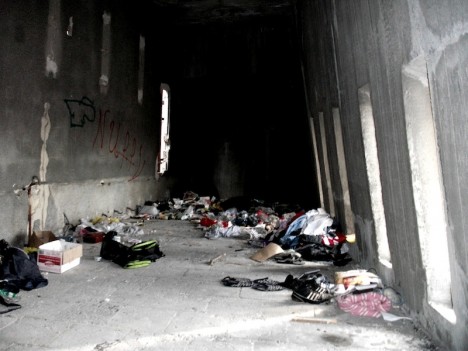 The Monument of the Bulgarian-Soviet Friendship in Varna is actually a nuclear bunker and is made of over 10,000 tons of concrete and 1000 tons of armature wire. Standing atop a mass grave of soldiers lost to the Russian-Ottoman War, it was built at the end of a grand boulevard designed to run through the city for Communist parades and other celebrations, though this boulevard was never completed. The Bohemian Blog has a haunting series of images of this structure in its abandoned and vandalized state. 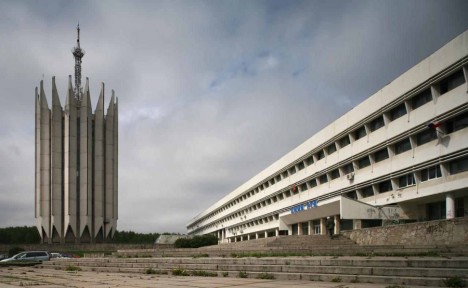 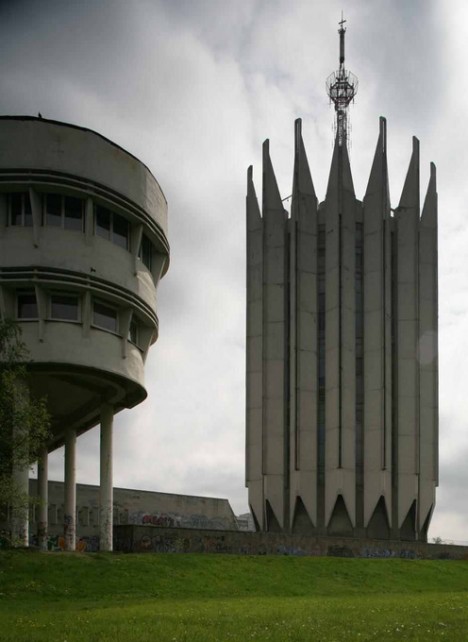 A concertina-edged tower stands at the center of the Russian Institute of Robotics and Technical Cybernetics in St. Petersburg, completed in 1987. Like most of Russia’s space travel-related architecture, the building is meant to communicate Soviet dominance in the exploration of outer space. 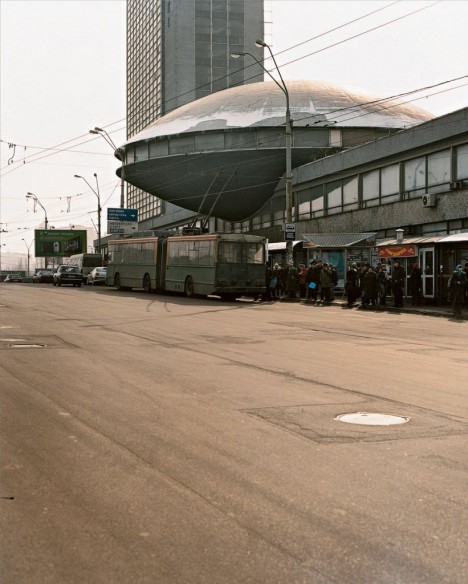 The very picture of a flying saucer perches on the edge of an ordinary-looking building in Kiev, fittingly serving as the crown of the Ukrainian Institute of Scientific and Technological Research and Development. 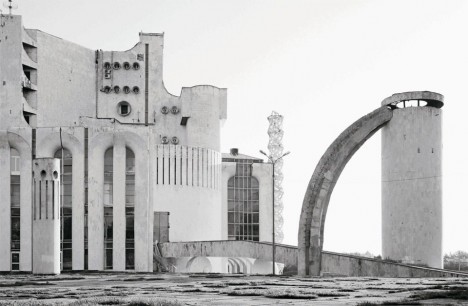 Another palatial structure with a dreamlike feel, the Fyodor Dostoevsky Theater of Dramatic Art was built in 1983 as the result of a policy that every Soviet city with more than 200,000 residents had to have its own drama theater in order to encourage young people to preserve and develop local culture. The committee responsible for commissioning the building wanted it to be outwardly eccentric to give passersby an idea of its function before they even knew what it was. 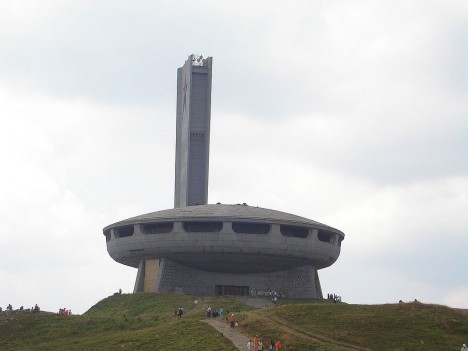 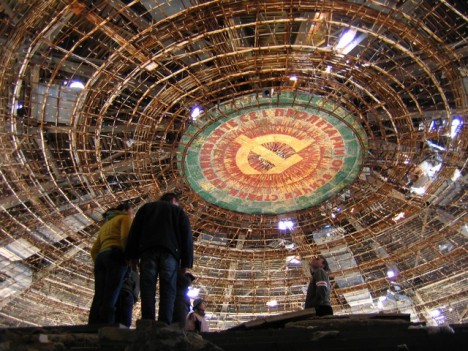 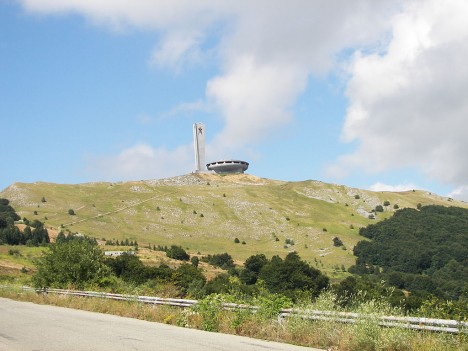 Abandoned and heavily damaged by weather and vandalism, the Buzludzha monument pays tribute to the formation of an organized socialist movement in 1891 which served as the forerunner to the Bulgarian Communist Party. A skinny tower rises from the saucer-like structure on a peak in the Central Balkan Mountains, still standing only because Bulgaria can’t afford to demolish or restore it, though some officials believe it could bring in money as a tourist attraction. Thieves have stripped away most of the roof paneling so that snow falls inside the domed structure in winter.