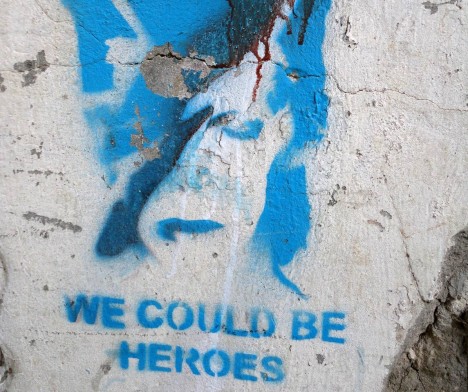 Minimal yet movinge: the above blue-on-white stencil from Tel Aviv, Israel’s graffiti-filled Gordon St epitomizes and encapsulates the essence of Bowie. Judging from the cracks and flaking, this image has been around for some time. Indeed, David Bowie was making an impression before many of his current fans were even born. 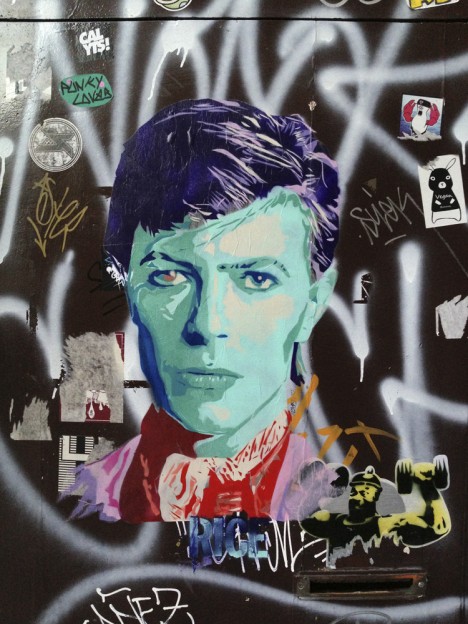 Roses are red, violets are blue, Martians are green… and so’s David Bowie in this striking paste & stencil composition from Barcelona, Spain. Credited to the street artist RICE, this contemplative pastiche dates from 2013. It probably looks even better under some serious moonlight. 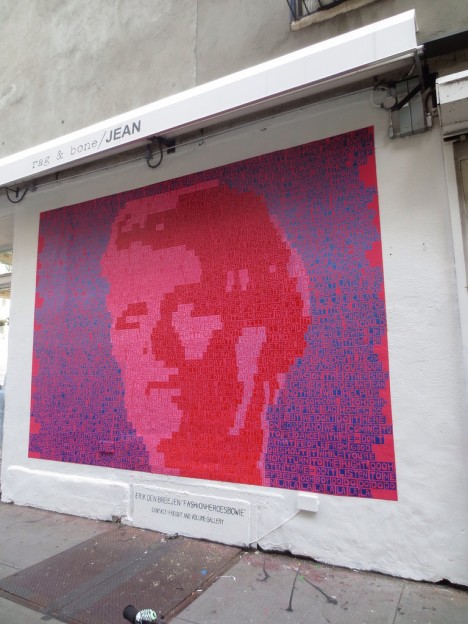 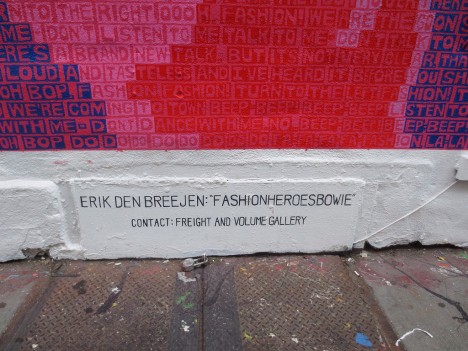 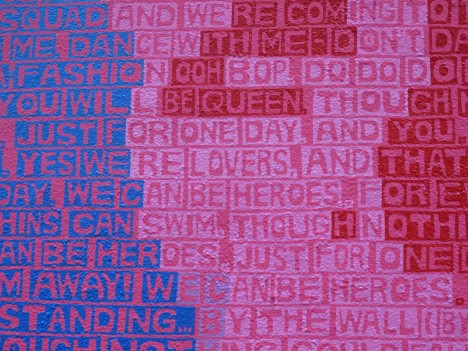 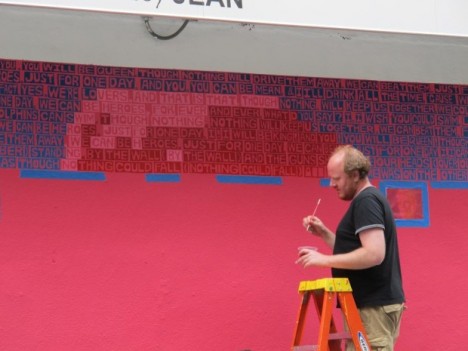 Brooklyn-based Erik den Breejen specializes in painting mosaics using text – song lyrics, to be exact. In the case of the above David Bowie portrait at 73 East Houston in Manhattan’s Lower East Side, den Breejen employed the lyrics from “Heroes” and “Fashion”. Alas, the July 2013 mural was just one in a series of artworks painted on the Rag & Bone’s outer wall, and just a few weeks later it had been painted over. 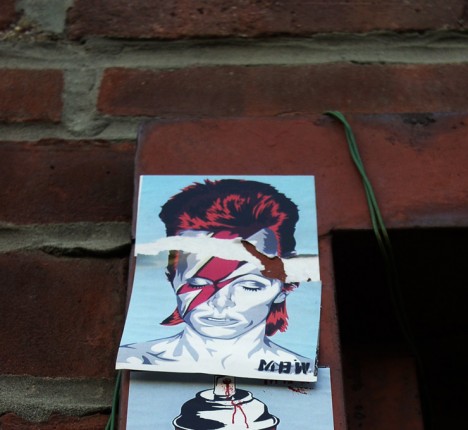 Intentionally bent and broken tiles tell the tale in this ceramic tribute to David Bowie. Signed by the artist MBW, the above photo by ©Jaime Rojo was taken in Manhattan some time in 2008. 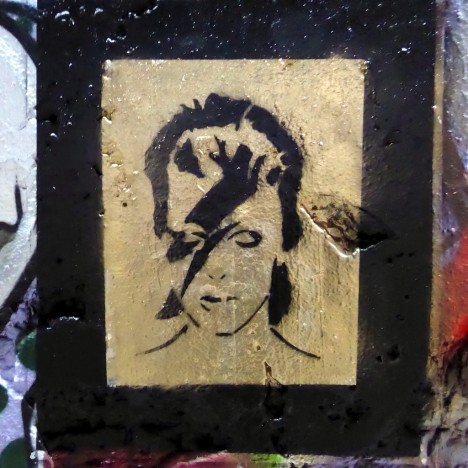 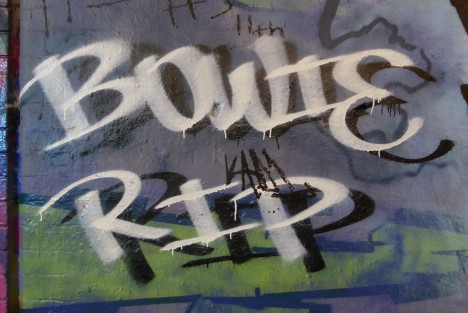 Flickr user duncan c snapped the above two images on January 12th of 2016, two days after David Bowie passed away. Located on Leake Street in London, it’s not certain whether both images are related to one another though the second one is rather obviously new. 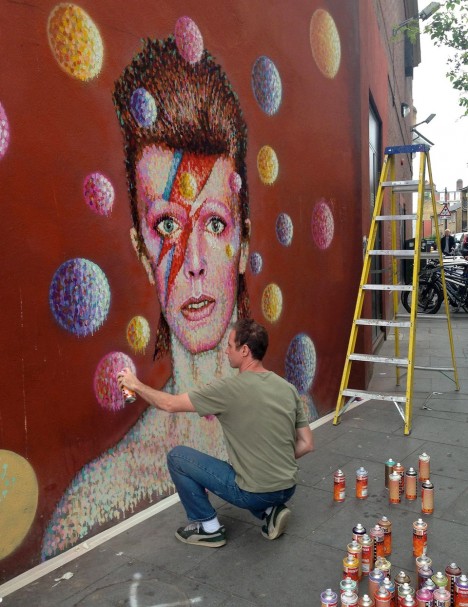 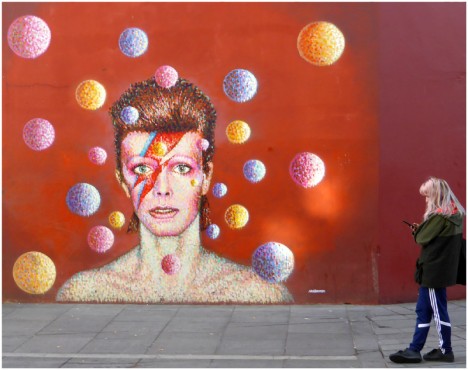 Perhaps the most famous street art tribute to David Bowie is James “Jimmy C” Cochran’s 2013 wall mural portrait near the Stansfield Rd., Brixton house where he was born. Flickr user Don Byatt snapped the mural (above) on December 19th of 2015, a scant three weeks before Bowie passed away. 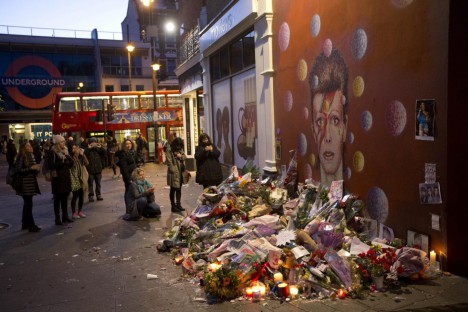 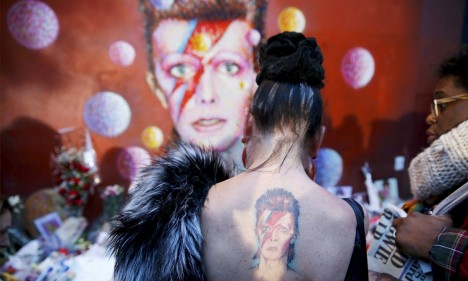 Almost immediately after word of Bowie’s passing on January 10th, 2016 became known, fans and friends flocked to the mural; now an unofficial memorial to the man who once sold the world, then stole our hearts.