Taking to the skies in Berlin, a set of color-coded drones aims to make the biggest spray-painted mural ever made (at least by robots) using unmanned aerial vehicles equipped with programmed paintings. And this is just the beginning: painting drones could enable civic artwork in hard-to-reach places, and eventually serve practical applications, re-coating infrastructure and architecture. 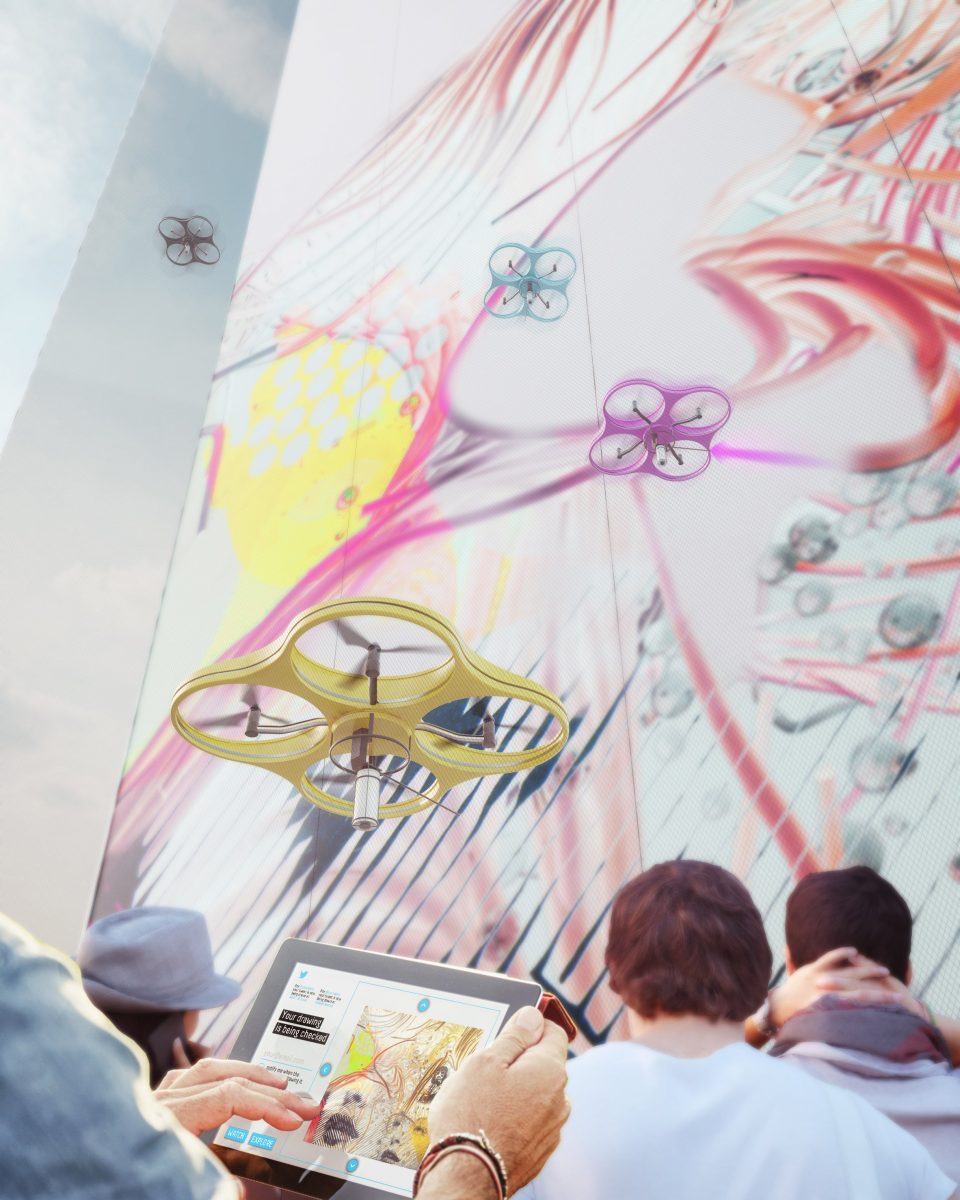 Designed by architect (and director of MIT’s Senseable City Lab) Carlo Ratti’s, the Paint By Drone system employs sets of four drones, each loaded with its own paint tank. Like a CMYK (Cyan, Magenta, Yellow, Key [Black]) system much like modern printers, each contributes a layer to the piece. Together, these layers can add up to a full spectrum of color possibilities.

Ratti’s team has used drones before — as tour guides at MIT, for instance — and is now experimenting with ways to engage them with other activities in the built environment, testing their limits in a more public and large-scale setting. In this case, the sheeting that wraps scaffolding, ordinarily left blank and dull (or used for advertising) can be dynamically turned into something beautiful.

The drones can be adapted to work with different inputs, allowing passers by to submit designs, for instance, or to select sections of canvas to paint. For now, they are being deployed on a surface stretched across scaffolding, but the idea is to ultimately enable public art in more places — precision-guided small drones can reach high up on (or under) structures like bridges that would be difficult (and dangerous) for people to access directly.

More on the mechanics of the system: “A central management system regulates the drones’ operations in real-time, from image painting to flight, using an advanced monitoring system that precisely tracks the UAV’s position, detecting multiple devices simultaneously. Furthermore, a protective net placed on the scaffolding’s’ cover allows the drones to move into a safe space. Drones can draw content submitted digitally, via an app. The artistic input can come from either crowdsourced platforms or from a curator orchestrating the contributions of several people.”

“Paint by Drone represents a next step,” in their research, reports Carlo Ratti Associati, “on both vertical drawing and open-source design, which includes projects such as OSARC (Open Source Architecture) at the 2012 Istanbul Design Biennial and the Vertical Plotter system featured at Milan Expo 2015’s Future Food District, which entered the Guinness World Record as the world’s largest plotted image. The new concept pushes the previous boundaries of time and space, having the potential to be installed in just a few hours in a city and paint on any surface.”