Residents of Waterloo Estate towers in Sydney, Australia, were given a uniquely visible voice this year amidst city plans to change the neighborhood. The #WeLiveHere2017 project gave 500 residents in two 60-story towers ‘mood lights’ so they could express their views on the proposed future of their home.

“#WeLiveHere2017 celebrates the community of Waterloo before a large scale redevelopment changes the area forever,” explain the project’s creators, “bringing with it swathes of high-density private dwellings and an uncertain future for the thousands of existing residents.”

“Hi My name is Fiona Mangold, I’m 88 years old. I’ve been living here in this building for the last 18 years. I came from Scotland originally and have been here in Sydney since 1949. I fell in love with the place and stayed. I’m very happy here…….I know many people in the buildings and the businesses around here. But if I have to go I’m sure I’ll enjoy it wherever I go. I’m sure I’ll meet many more lovely people there as I have here. I love the lights I’d love to see more of them, I think its a splendid idea and way of letting people know what’s going on in the area.” Pic by @nicwalker101 #welivehere2017 #artandabout #cityofsydney #redfernlyf #redfernnow #waterloo #humansofwaterloo #redfern #sydneynight #sydneylocal #sydneyurban #sydney #art #communityartproject #lights #lightson #lighting #lightitup #creatensw #peopleofwaterloo #people #socialhousing #publichousing #publicart

An estimated 3,600 elderly and low-income residents will be moved out of the way when a new metro station is added and associated reconstruction complete. Indirectly, the lighting lends a voice to people living in vulnerable low-rise structures below, which are the most likely to be demolished and replaced.

“We chose the Matavai and Turanga towers to represent the whole estate as they are the tallest and most visible,” explained one local resident of the project. “They were purpose-built for elderly residents, and I don’t think I’ve met anyone living there who is under the age of 65.”

*ANNOUNCING* the #winner of the #welivehere2017 #instagram comp is @bonapetite_ aka @casceru aka Carol Tang for this wonderful picture. There were some amazing photos taken and it was really tough to make a call. We have some highly highly commended which we will post shortly. Thanks so much to everyone who posted and engaged with this campaign. It’s been amazing. The lights are on, somebody is home. . . . #artandabout #artandaboutsydney #cityofsydney #welivehere #redfern #waterloo #redfernlyf #redfernnow #redfernhood #waterloohousingproject #waterloolights #lights #lightson #lighting #lightitup #art #publicart #publichousing #sydney #sydneynight #sydneylocal #sydneyurban #alwayswasalwayswillbe

“By telling the stories of this inner city community, the project empowers residents to participate in a collective statement of presence: a beacon to the place and the people.” It is also “a dynamic platform to generate valuable discussion around the importance of public and affordable housing, and the right of every person to a home.” 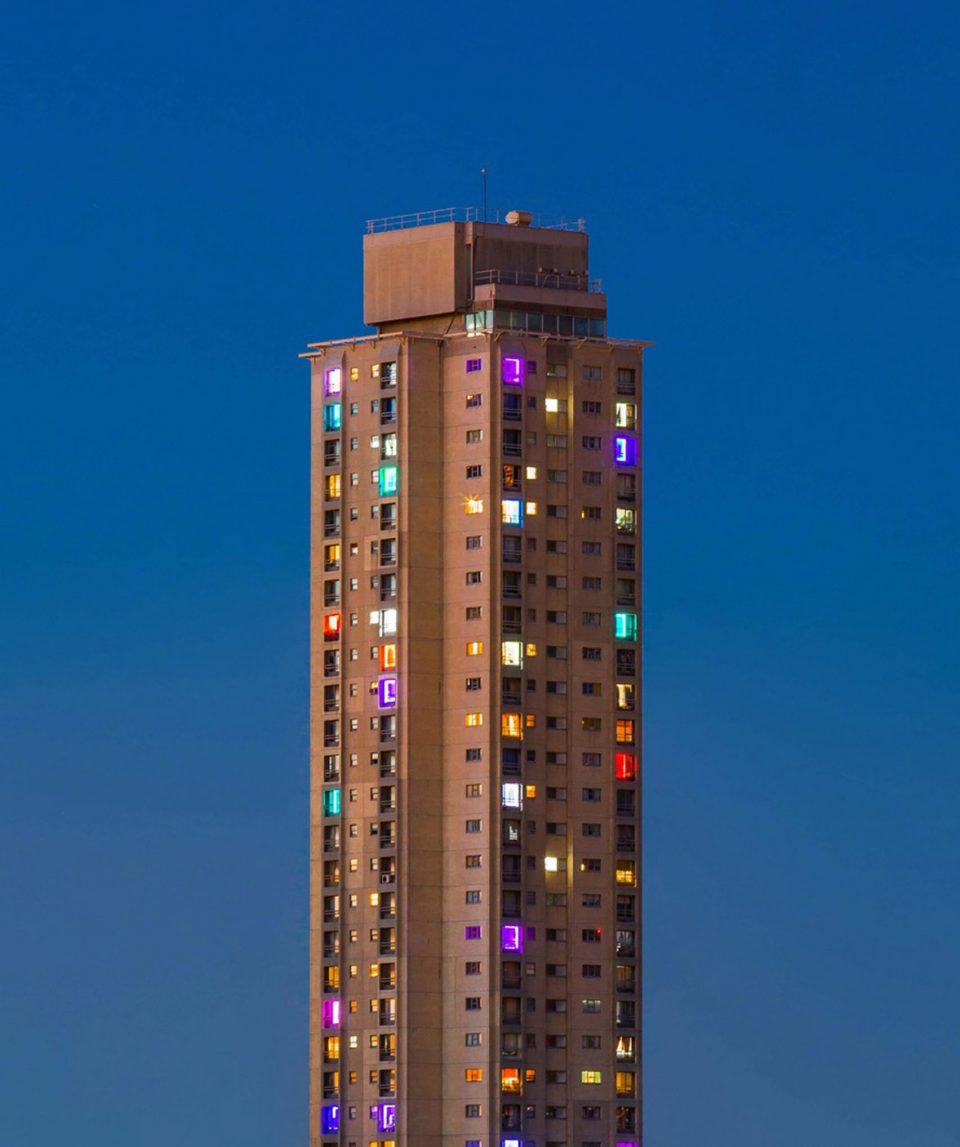 There is also a personal element to this approach — each light represents an individual, and creates a spot of bright color to help people remember that, even if it looks a bit dreary on the outside, there is someone living in a tower.

The project wrapped up last month, and it remains to be seen how much it will impact development in the area, but it is certainly an intriguing template for would-be protesters in urban settings well worth looking at (images via WeLiveHere2017, Tom Wholohan and Shuang West).