“Peeing on this ad may change your life,” reads the text at the top of a new IKEA advertisement in a women’s magazine. That text alone, devoid of context, might understandably make you question whether the Swedish retail giant has gone a little too far in the hope of grabbing the attention of a fickle public, but take in the rest of the page, and it starts to make a little bit more sense. But just a little bit, because they’re still asking you to tote a pee-soaked piece of paper around. 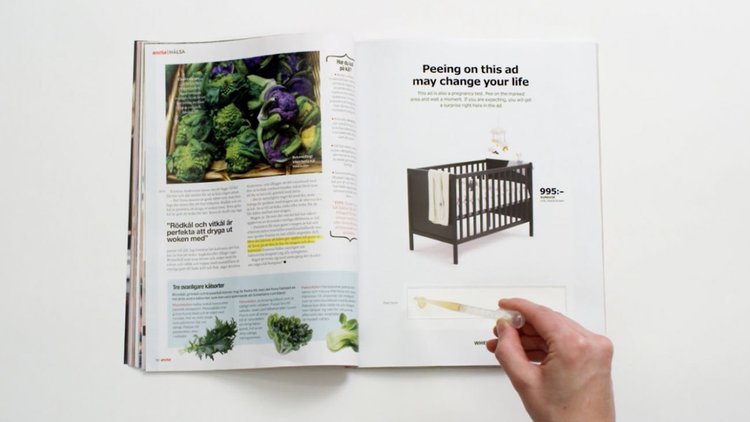 Centered on the page is a photo of a crib. In small text, just above it, reads “This ad is also a pregnancy test. Pee on the marked area and wait a moment. If you are expecting, you will get a surprise right here in the ad.”

Down yonder is the rectangle in which you are expected to deposit your urine – carefully, one would hope, perhaps with a syringe, though most people will likely just hold the whole page inside the toilet. Which raises the question of whether IKEA considered the fact that they’re asking customers to bring this paper into stores and hand them to employees in exchange for 50% off a crib.

Genius idea from Ikea – Ad doubles as a pregnancy test. If you’re pregnant, peeing on the ad reveals a special discounted price on cots. pic.twitter.com/kWuJfOwpIX

Skeptical? It’s real. Swedish ad agency Åkestam Holst created the ad in collaboration with Mercene Labs, and a video at Adweek shows how it works. Here’s what the agency has to say about it:

“In order to make the interactive functions of this ad work in reality, we had to make several technical advancements. The pregnancy test strip was used as a starting point, which relies on antibodies that bind to the pregnancy hormone hCG, resulting in a color change. For scaling up of this technique and adopting it to the physical format of a printed ad, Mercene Labs has used their experience in development of surface active materials for microfluidics and medical diagnostics. Careful selection of materials, together with a controlled capillary flow have been crucial for the success of this project. Technical advancements made during the work with this campaign have the potential to improve medical diagnostics.”

In any case, you can’t deny that the ad made a splash.