Why do so many houses in Vermont have these strange crooked windows tucked under their eaves? The fact that they’re called ‘witch windows’ should tell you a little something about their origins. The site of only one witch trial in its day, Vermont wasn’t an epicenter of witchcraft hysteria like Massachusetts, but fears of supernatural trickery were strong enough to influence an architectural trend that carries on into the 21st century. 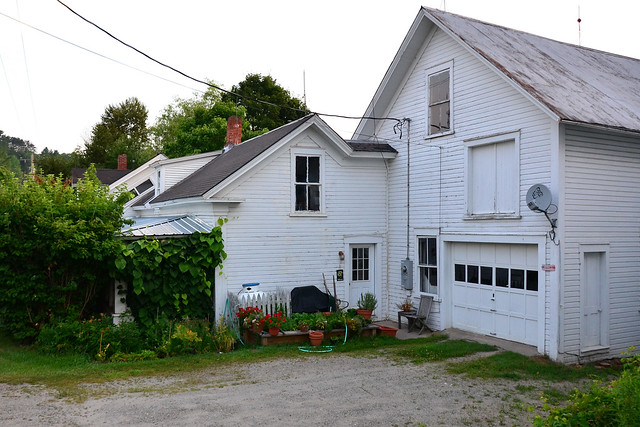 if you just see one of them and don’t know about the phenomenon, you may think you’ve spotted a bizarre renovation fail, but they’re set this way on purpose. Made with conventional portrait-style windows, they’re simply set into the wall at a diagonal. The reasoning? According to legend, witches can’t fly in on their broomsticks when the window isn’t straight. Hoping not to scare off potential buyers, realtors in the state have taken to calling them ‘Vermont Windows.’

All my favorite childhood stuffies beneath my grandparents Witch Window. ???? . American architecture vernacular: a ‘Witch Window’ is a window placed in the gable-end of a house and rotated approximately 45 degrees from the vertical, leaving it diagonal, with its long edge parallel to the roof slope. Found almost exclusively in Vermont, generally in the central and northern parts of the state. They are principally installed in farmhouses from the 19th century, although they can be found—less frequently—in new construction.

As URBO notes, an employee of Vermont’s Division of Historic Preservation made a salient point: why not angle all of the windows? If the builders who first included ‘witch windows’ in Vermont houses really believed the superstition, why would they think witches bent on entering the homes of strangers wouldn’t just pick a different window? The answer may be that nobody ever truly bought that witches were a real problem in the first place, and the anomaly caught on simply because it’s a fun local tradition.

Here’s an interesting piece of Vermont architecture and good old fashioned Yankee Ingenuity. See the crooked window, or the window placed in a slanting position on this farmhouse’s gable? That’s a piece of obscure Vermont. These funny window orientations aren’t found in other states. To add a bit more froth to the isolated mystery, we Vermonters call them “coffin windows”, or sometimes “witch windows”, depending on who you are I guess. The stories vary, and can’t really be traced back to a starting point of origin. Going alphabetically – it’s said these are called coffin windows because if a family member died upstairs, it was far easier to maneuver the needed coffin out the window and slide it down the roof as opposed to figuring out just how to haul it down a steep and narrow Vermont farmhouse staircase. And trust me, they’re very steep and narrow to a point of overcautiousness when walking up or down one. The name witch window gets a bit more on the superstitious side. It’s said that an old belief was that a witch couldn’t enter your dwelling through a crooked window or opening (sort of like how the ancient Chinese thought bad spirits traveled in straight lines). I know old Vermonters were a superstitious bunch. Our collective state history and folklore include such things as incriminating real people accused of Vampirism, or desecrating the graves of dead people accused of postmortem vampirism before making the supposedly “attacked” person eat the corpse’s burned and mashed heart as a ghastly folk remedy. But witches? There isn’t much known on how scared Vermonters were of witches, leaving this as intriguing speculation. A more practical theory was that these windows were a creative solution to let light into the cramped spaces upstairs. Gables didn’t often leave rooms for traditional sized windows and poor farmers didn’t want to spend the money on drafty dormers or getting a custom one made – which was pretty expensive then. They also allowed fresh air and ventilation to keep the house inhabitable. #obscurevermont #diy #coffinwindow #witchwindow #architecture #weird #vermont #roadsideamerica #folklore #yankeeingenuity #oldhouses #macabre #arcane

You can get an idea of just how prevalent this trend is in Vermont by checking out the #witchwindow tag on Instagram.