The United States currently has a shortage of about 7.2 million affordable and available rental homes for households with incomes at or below the poverty level, a statistic that’s clearly linked to the homelessness crisis. Meanwhile, 8 million Americans spend more than half of their monthly income on rent.

To house those most urgently in need as well as the people who make just enough money to fall through the cracks, cities have to start building more affordable housing as quickly as possible. But that doesn’t mean they should slap up some public housing towers and call it good. To be successful, affordable housing has to offer more than just shelter; it has to be thoughtfully designed to provide a good quality of life to its inhabitants.

In the U.S., the few affordable housing developments that exist often feel like fenced-off prisons, reflecting common attitudes about poverty rooted in the just-world hypothesis – the assumption that, essentially, people get what they deserve. Barriers to creating more affordable housing include city and state regulations that prioritize profitability for developers, and severe cuts to federal housing programs proposed by the current administration.

But some cities are forging their own paths. New York City has set out to build and preserve 300,000 units of affordable housing by 2026, and its Public Design Commission (PDC) published design guidelines for that goal that could become a blueprint for the entire nation.

“Designing New York: Quality Affordable Housing” lays out best practices in planning affordable housing that “contributes to the quality, character, diversity and experience of New York City’s communities” while improving equity, resiliency, sustainability and health for residents and neighborhoods. The developments should foster density and encourage interaction while presenting inviting, warm, safe and dignified living spaces that are durable, easy to maintain, attractive and accessible by transit, car, bike and on foot. Oh, and they have to be budget-friendly to build, too.

That may sound like a tall order, but the guide includes seven case studies of existing developments that tick off all of these boxes and more, and there’s no reason their success can’t be replicated elsewhere while also being tailored specifically to each location and population. Utopian dreams of affordable housing communities have certainly fallen flat before, like the spectacular failure of the modernist Pruitt-Igoe Housing Project in St. Louis, Missouri, but today most of them read like warnings of what not to do. While the future of affordable housing may center upon open-source technological solutions, PDC’s guide is a step in the right direction that can be acted upon right now, adding to the general discourse about what makes affordable housing successful.

Community-Oriented & Woven Through the Urban Fabric 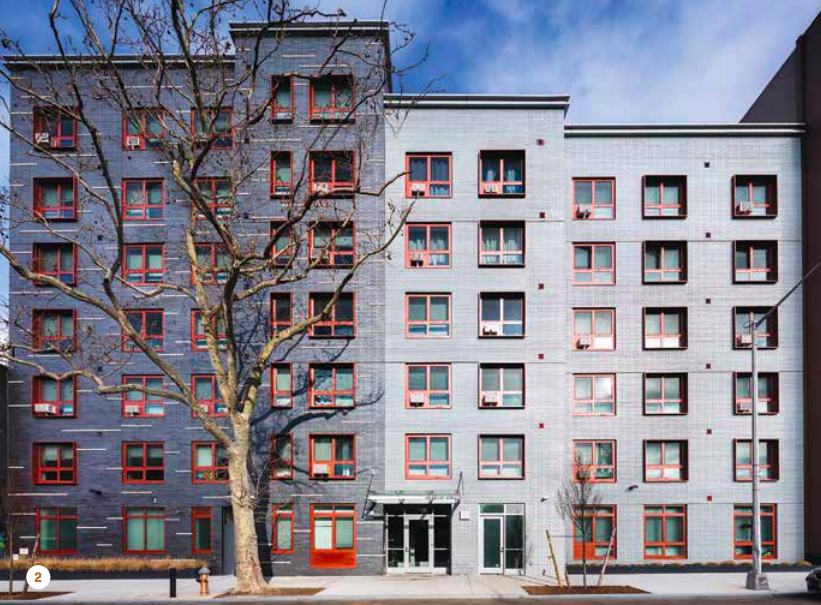 Integrating affordable housing into the community instead of setting it apart is a great place to start. Not only should they offer easy circulation into transit and segue culturally and aesthetically into existing neighborhoods, they should respond to the priorities of the communities they serve. PDC cites the Frost Street Apartments, a 7-story, 47-unit complex in a gentrified area of Brooklyn by Curtis + Ginsberg Architects as an example.

Not only does it complement the typologies of surrounding architecture and avoid a monolithic appearance with setbacks and a variety of facade colors, it roots affordability into Williamsburg by housing people with incomes at 50%, 60% and 80% of the area median, with eight units set aside for adults with developmental disabilities. On-site support services are available, and residents enjoy bike storage, lots of natural light, bamboo flooring and open kitchens; five percent of the units are pre-adapted to be handicapped accessible.

“How can a building contribute to a sense of community, and help its residents regain stable, independent lives?” asks the Public Design Commission. The Schermerhorn in Brooklyn helps answer that question with 180 studio units for low-income residents and 9 multi-person suites with shared kitchens and bathrooms for formerly homeless single adult residents, all set along day-lit corridors. Preference is given to those working in the performing arts.

The building’s ground floor is home to a dance studio as well as the Mark O’Donnell Theater at The Actors Fund Arts Center, hosting performances by residents, and the entire second floor is devoted to shared spaces, social services and a rear terrace. It’s visually striking, too, cantilevered over a subway tunnel with a facade defined by five vertical channel glass panels.

Making a structure sustainable requires more than just going down a checklist of physical attributes. Sustainability should address the health and well-being of inhabitants, too. While the Creston Avenue Residence in the Bronx may include rooftop solar panels, green roofs, low-VOC finishes, formaldehyde-free materials and a rainwater harvesting system, making it one of the few LEED Platinum Certified supportive housing buildings in the United States, it also incorporates community rooms and amenities that open onto a rear courtyard landscaped with native plants, offers lots of views of the neighborhood and encourages the use of stairways.

This building provides housing to people who are chronically homeless or in danger of being homeless, veterans with housing vouchers and households meeting income eligibility requirements, and offers support services to residents. It’s the first building funded by the New York State Medicaid Redesign Team Supporting Housing Initiative, which recognizes housing as a social determinant of health.

Another example cited by PDC is Arbor House in the Bronx by Bernstein Associates, a state of the art affordable housing complex that incorporates a 10,000-square-foot hydroponic rooftop farm that provides fresh produce like lettuce and herbs to tenants. Built in an area where residents have lower life expectancies and higher rates of preventable chronic diseases compared to New Yorkers in wealthier neighborhoods, Arbor House offers an indoor gym, a wide, central day-lit stairway, an outdoor fitness circuit and organic-themed artwork by a local artist to help give the building a sense of identity.

Smart Use of Land and Materials

For Navy Green, a 433-unit building in Brooklyn by FXCollaborative, Curtis + Ginsberg Architects and Architecture in Formation, one key to affordability was the choice to transform a contaminated brownfield into a building that takes up almost an entire city block to accommodate residents with a wide range of incomes and needs. Owned by the city, the land was once a naval prison.

After rehabilitation, it’s a series of four apartment buildings (low-income rental, mixed-income rental, mixed-income condominium and a supportive housing residence) that form a perimeter around a shared green. The buildings are strategically designed to block views of the adjacent Brooklyn-Queens Expressway and a 15-story Navy Yard warehouse. The distinctive facades of each individual building make the complex seem like it was developed over time.

While located in a waterfront neighborhood that’s susceptible to flooding, the Hunter’s Point South Commons and Crossing building by Ismael Leyva Architects and SHoP Architects in Long Island City offers affordable and income-restricted units stunning views while building flood potential into the design. Critical infrastructure is raised to higher elevations and the building is capable of withstanding substantial water loads, with temporary flood barriers integrated into the ground floor.

Of course, these projects don’t just spring up out of nowhere. Many of them receive special state or city funding and are built on land already owned by the city, circumventing a lot of common obstacles to building new affordable housing. But they also address affordability in a holistic way that benefits the city as a whole, avoiding the segregation of low-income residents from the rest of the population and improving their lives in the process.

Designing and constructing affordable housing also requires taking a hard look at what the word ‘affordable’ actually means in relation to the real and growing issue of income inequality in the United States. But the PDC’s “Designing New York: Quality Affordable Housing” gives us a strong foundation for a future of affordable housing that could also include lots of modular, 3D-printed and otherwise technologically advanced structures.