These traffic safety cones manage to rise above their innate urban utility by virtue of some – dare we say ‘iconic’ – conic characteristics. 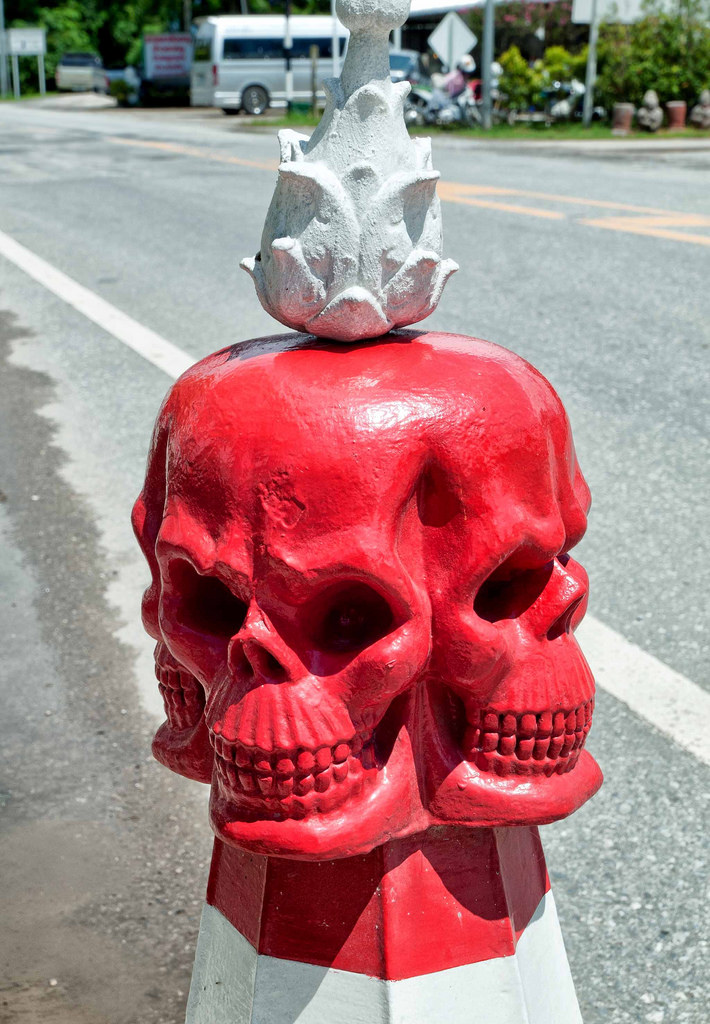 Wat Rong Khun (White Temple) in Chiang Rai Province, Thailand is truly a work in progress: construction began in 1997 and is, at press time, ongoing with no end in sight. Nevertheless, tourists are welcome to visit the Buddhism-themed art exhibit designed and owned by eccentric Thai artist Chalermchai Kositpipat but park VERY carefully… or else! Flickr members jay joslin (moonbird) and Bill Vriesema (bvriesem) snapped some of the White Temple complex’s many spooky skull-headed traffic cones in May of 2012 and July of 2015, respectively.

Black Is The New Orange 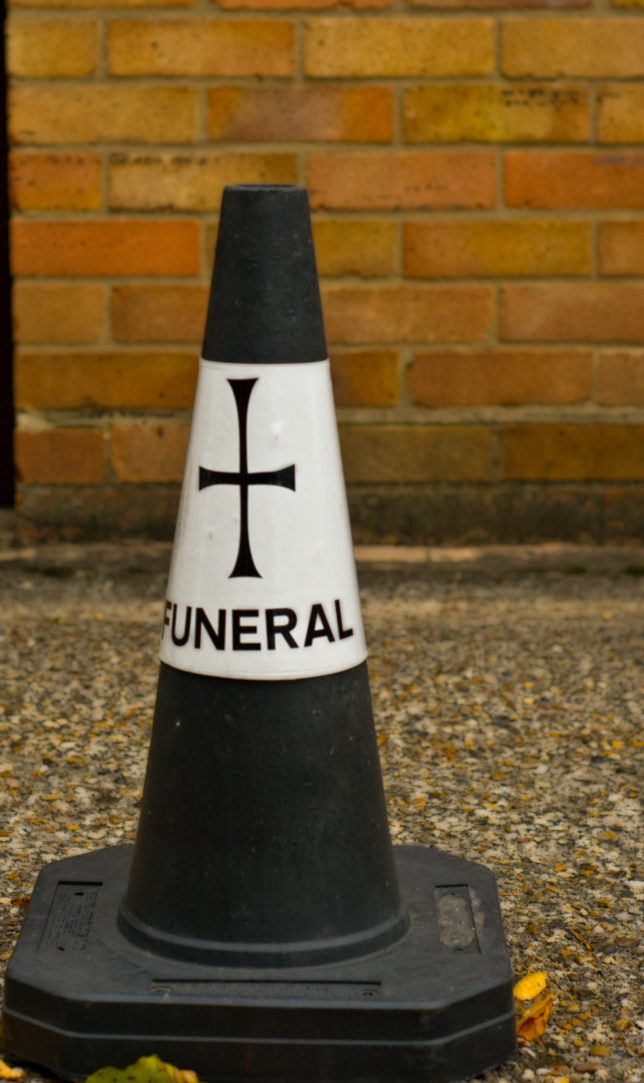 When it comes to those most solemn of occasions, a garish day-glo orange traffic cone simply will not do. In keeping with the primary function of safety cones, however, the example above sports a bone-white (sorry) central section with contrasting black lettering and a cross. Presumably “funeral cones” displaying Greek Orthodox crosses, Stars of David, the Islamic Star & Crescent and the Flying Spaghetti Monster lie await in storage. Flickr member Andreas-photography captured this rather funereal funeral cone from Essex, UK, in October of 2008.

A Cone With a Peel

Expect something magical when visiting the Downtown Disney District at the Disneyland Resort in Anaheim, CA… or at least, expect unexpectedly cute safety cones. This cleverly designed cone evokes the old trope of careless cartoon characters slipping on banana peels – does that ever even happen in real life? Flickr member junaidrao captured this banana peel cone poolside in May of 2017. 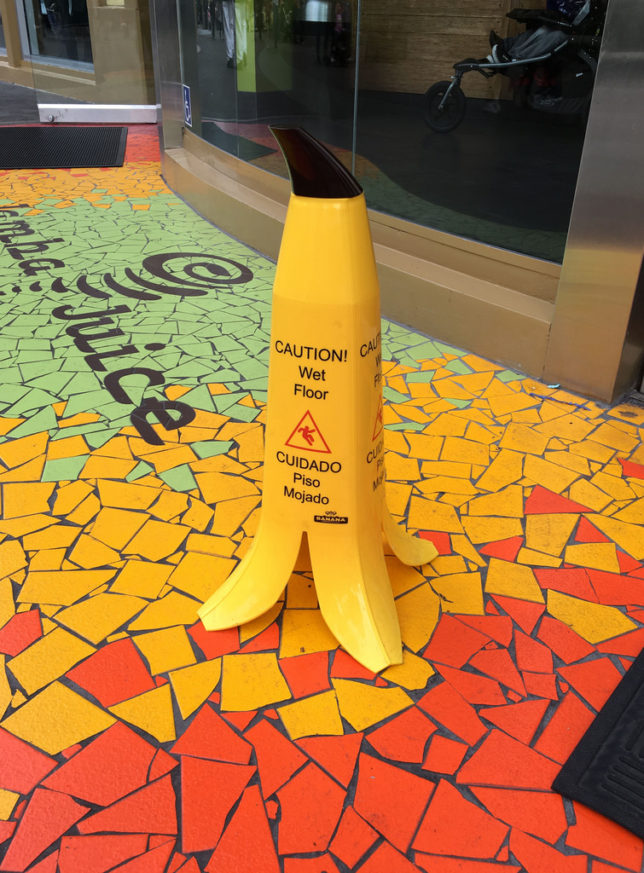 Here’s another a-peel-ing safety cone, saved for photographic posterity in front of the Jamba Juice kiosk at Downtown Disney District. Flickr member Sam Howzit was impressed by its presence in December of 2015. We hope Sam didn’t spill his juice (or himself) while trying to get the perfect shot.

TIL Google has their own traffic cones… and they’re WAY cheesier than anyone could imagine! OK, points for representing the primary colors of the omnipresent search engine’s logo (well, kinda) but geez, guys, with all your moolah is this really the best you could do? Flickr member Simon Law (sfllaw) couldn’t resist recording this group of Google chromes, er, cones in Mountain View South, CA, back in November of 2006. 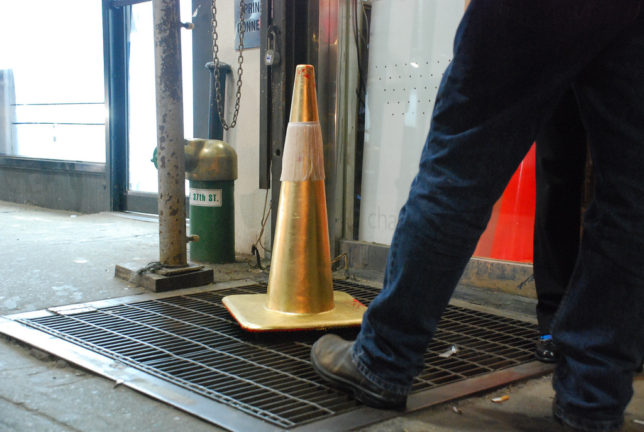 So the “How to Enjoy Traffic Cones” reception was a thing, who knew? Someone knew enough to customize some traffic cones, mind you, because boring old orange plastic cones would look so out of place at a swanky “reception” featuring traffic cones, amiright? Flickr member chashama Inc. photo-documented the October 2nd, 2009 collaborative exhibition held near the former midtown NYC location of Gray’s Papaya at Eighth Avenue and 37th Street. 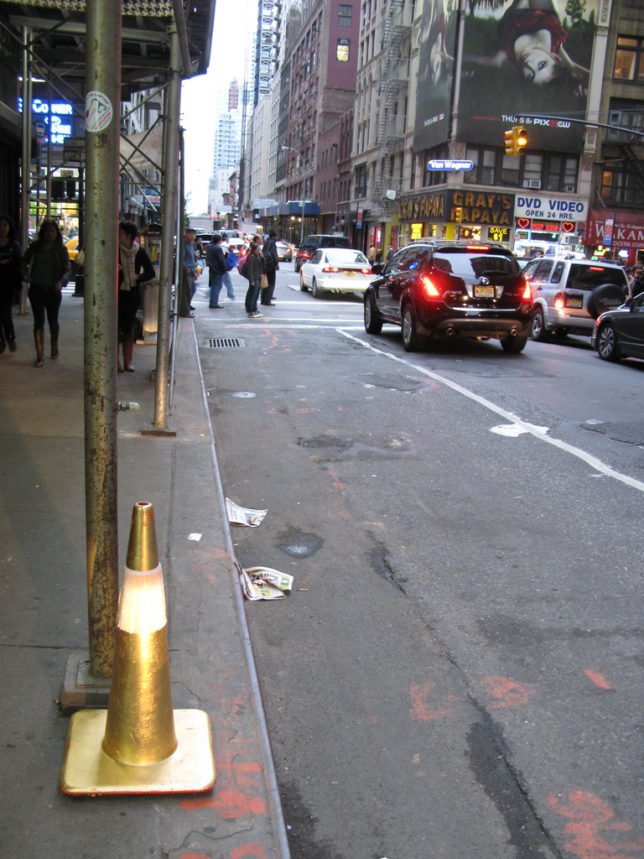 “Invariably unique, eye-catching and unpredictable, traffic cones are almost art. Like sculpture, their primary function is to be looked at.” So stated Erik Sanner, event organizer and King Kone. Can we call him that, cuz that would be awesome, just like these golden safety cones. Flickr member Nick Normal caught one of the blinged-up beauties with the sadly-departed Gray’s Papaya in the background. Thanks Nick, now we’re hangry! 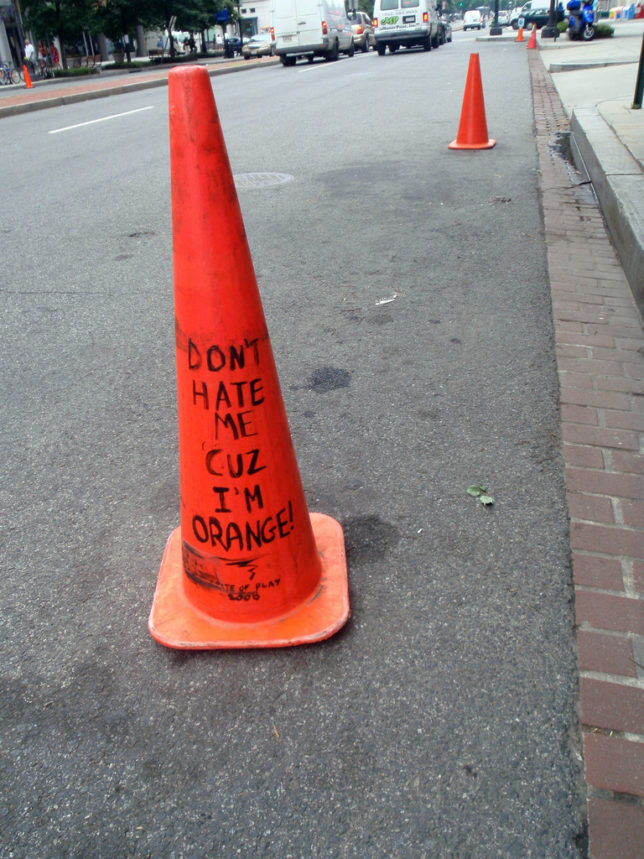 Indeed, no one should be judged by the color of their, uh, anything but this cone from The Nation’s Capitol proclaims its protest publicly… and pointedly. Flickr member Daniel Lobo (Daquella manera) caught this cone standing up for non-human rights way back in 2009… years before folks started hating on orange. 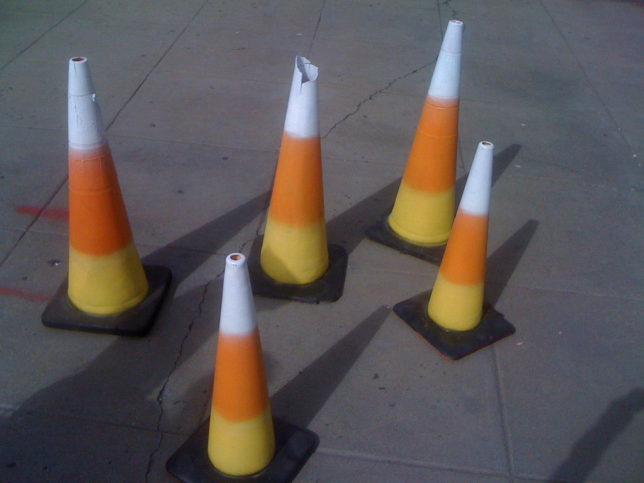 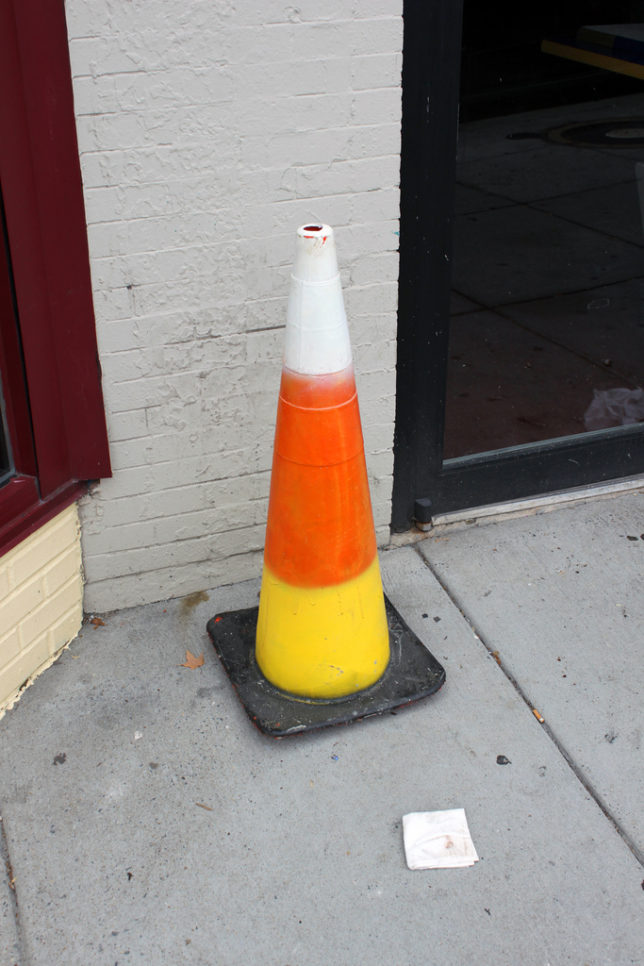 Flickr member thisisbossi snapped a Candy Corn cone in Washington D.C.’s historic district of Kalorama Triangle, and on October 31st yet! The close-up shot doesn’t indicate whether this was a solitary example or part of a larger group of cones. Either way, you wouldn’t want to lick it – tooth decay would be the least of your problems. 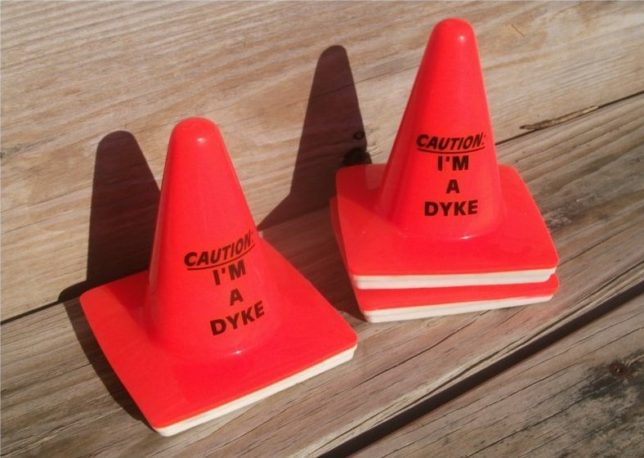 Obviously, the trio of bright orange safety cones above was meant to be deployed near dangerous levees in Holland… according to my wife, Morgan Fairchild. Yeah, that’s the traffic ticket! Seriously though, where would one actually use cones bearing such an “interesting” legend? A local Pride Parade, perhaps? Flickr member Capes Treasures‘ link to a presumed proprietary website comes up 404 so we’ll have to settle on the ol’ leaky Dutch seawall explanation. Mind yer fingers! 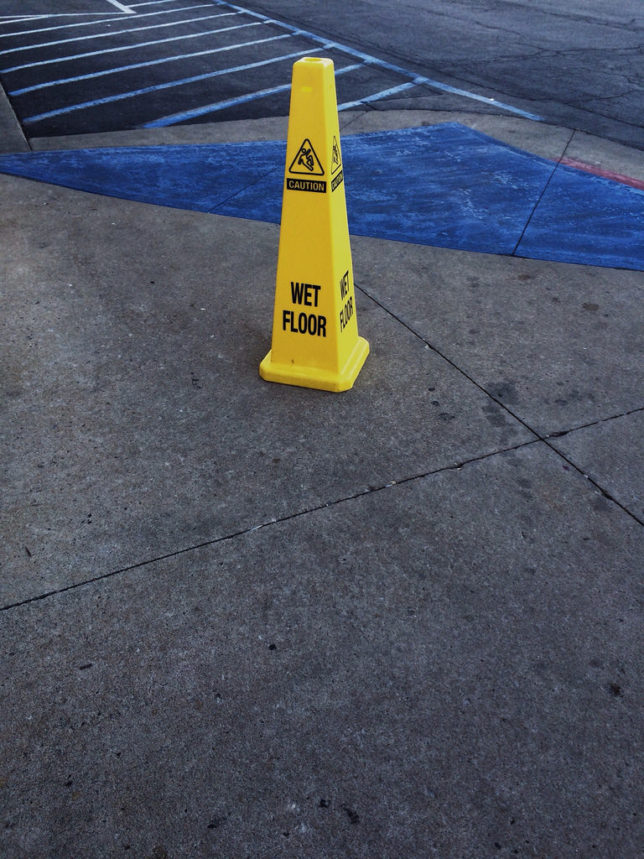 “The Wet Floor Sign That Wanted To Be a Traffic Cone” would make a great children’s book, according to Flickr member J.G. Park. Since turnabout is fair play, somewhere there’s an orange traffic cone plopped in the middle of an accidental puddle at some supermarket. The wannabe cone was snapped in 2016 while prompting double-takes from folks in Columbia, Missouri. 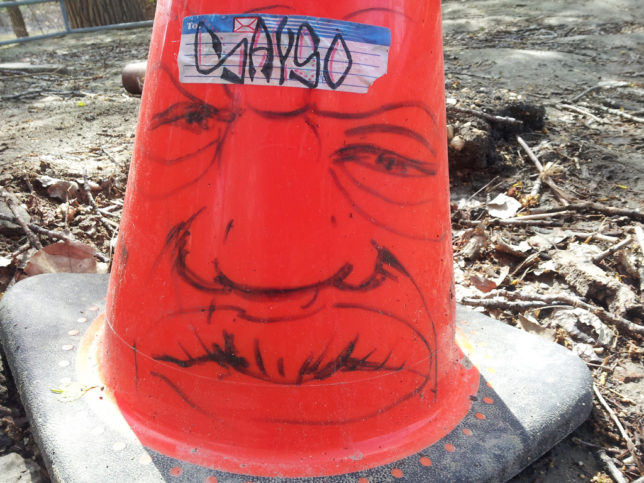 Whomever drew the scowling visage on the orange traffic cone above needs to be in an artist’s studio, not outside directing traffic or working on some anonymous construction project. Flickr member Rob Swystun zoomed in for an up close & personal view in May of 2012 while prowling the gritty city streets of Winnipeg, Canada… and you can bet he’s not sorry.