Well Blow Me Down (Under) 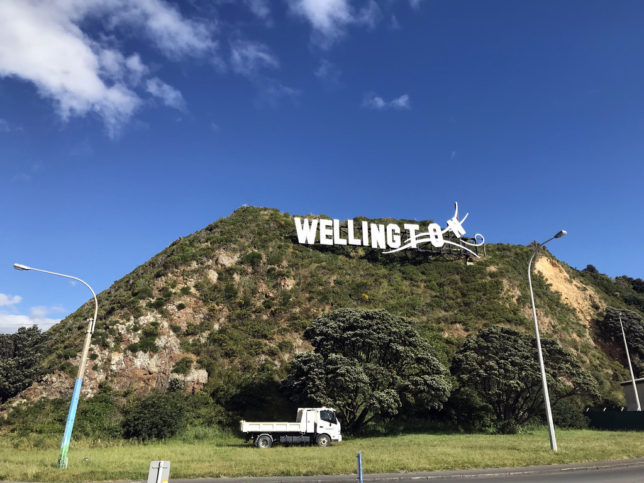 Wellington, New Zealand is the site of several film production and special effects companies associated with “Lord of the Rings” film director Sir Peter Jackson. In 2010 the city announced plans to erect a HOLLYWOOD-style sign reading “WELLYWOOD”, after a nickname inspired by Jackson’s silver screen success. Intense public backlash against the cheesiness of the nickname, however, compelled the city to go back to the drawing board. 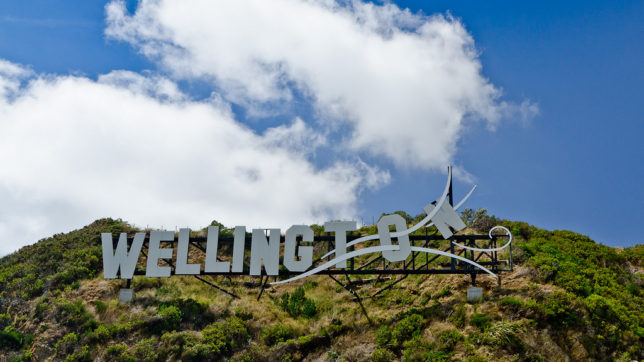 Plan B was the so-called “Wellington Blown Away” sign featuring a stylized wind (Wellington is notorious for its pervasive blustery breezinesss) disrupting the last few letters. This version of the sign was completed in late July of 2012 following numerous construction delays brought on by (wait for it)… dangerously high winds. Flickr members Bex Walton and Kathrin & Stefan Marks snapped the swirl-enhanced sign in 2017 and 2013, respectively. 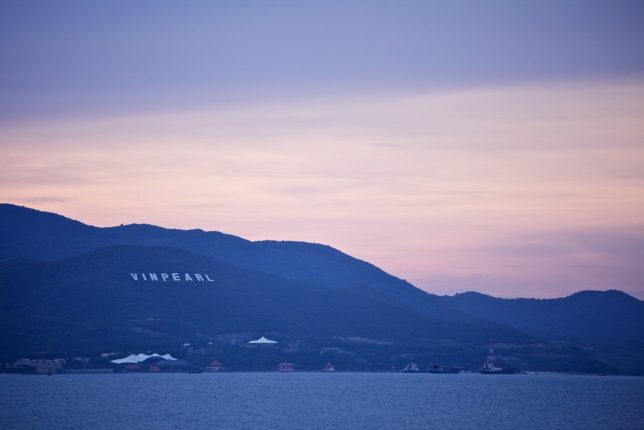 The Vinpearl Resort & Spa in Nha Trang, Vietnam is owned by Vietnamese billionaire Pham Nhat Vuong and it’s the jewel – or should we say, the pearl – of his high-end resort corporation. The huge “VINPEARL” sign in the wooded hills above the resort community was erected in the mid-2000’s and can be seen from quite a distance offshore. 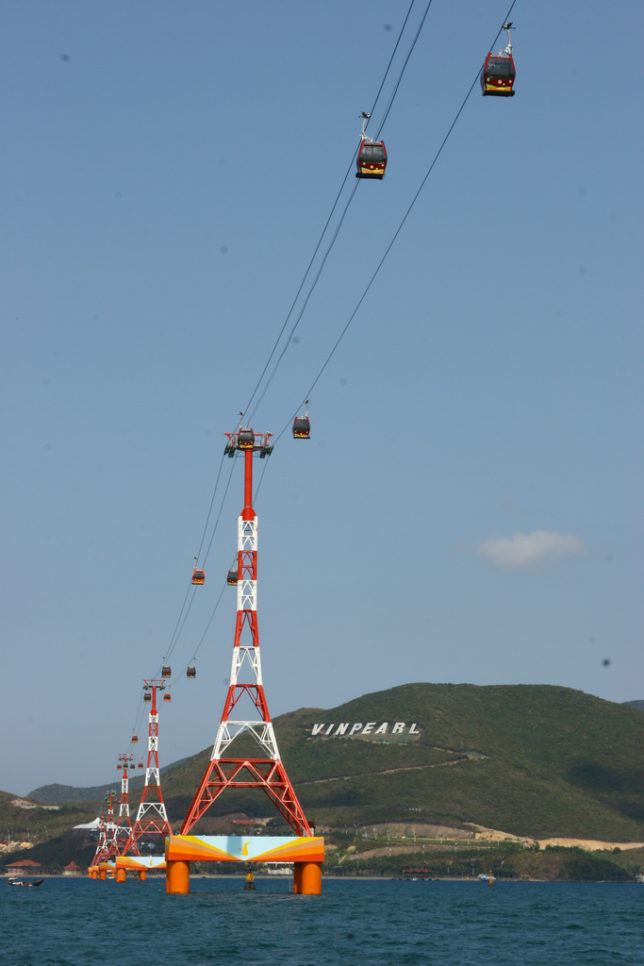 The longest over-water cable car in the world stretches almost 2 miles between the Vinpearl amusement park on Hòn Tre island and the beach at Nha Trang’s seashore. The nine Eiffel Tower-style pylons that support the cable car’s cables are illuminated by a laser system at night. The images above were posted by Flickr members radomix in 2010 and Jame and Jess in 2007.

The Other L A 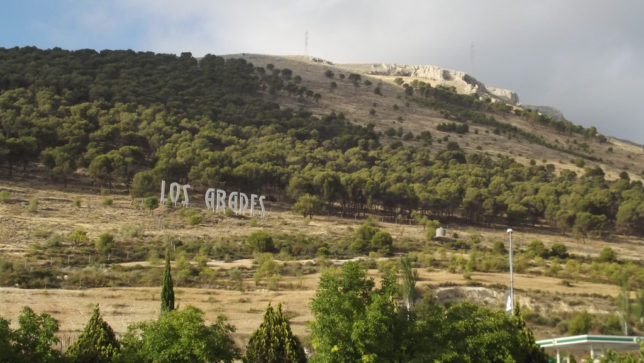 Hollywood is a magical place, especially to those who have never been to visit, and that may be why so many locales crave some of that magic for themselves. Take Los Abades, a roadside service area with an associated hotel located in Loja, Andalusia, Spain. 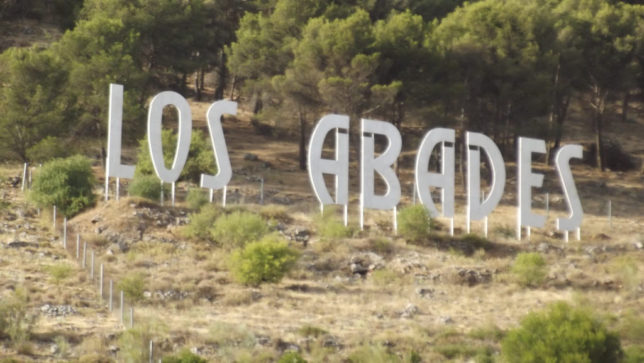 The Los Abades service area lies just off a well-traveled road between the southern Spanish cities of Malaga and Granada. The sign appears to be a rather recent addition to the complex, displaying a stylishly curvaceous font (c’mon, at least it’s not Comic Sans) that complements the “spaghetti western” look of the scrubby hills rising above the arid plains. Flickr member Elliott Brown captured the sign in its natural environment back in June of 2014. 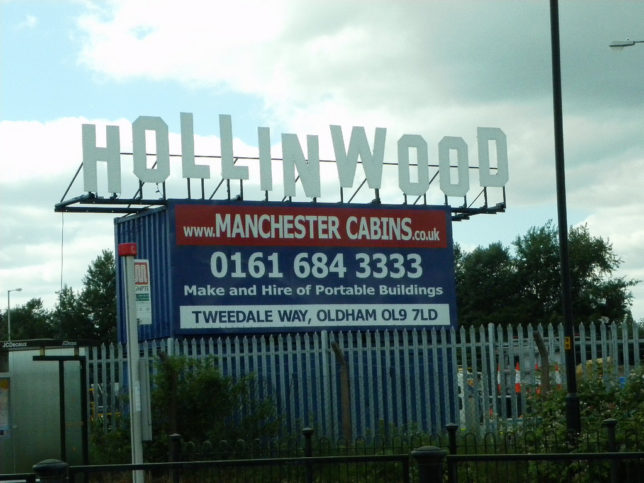 When your town’s name is “Hollinwood”, comparisons to “Hollywood” come with the territory so why fight it? Well, for one thing, it’s tough to top a place that’s part real, part fantasy, and part legend. Still, some try: take Hollinwood, a neighborhood of roughly 10,000 located in the Greater Manchester metropolitan area. Evidently there were no hills of note available where a HOLLYWOOD-type sign could be installed, so one was set up atop a billboard advertising portable cabins. Sad. Flickr member Pimlico Badger snapped the sorry spectacle in June of 2010.

From Russia with La-La-Love 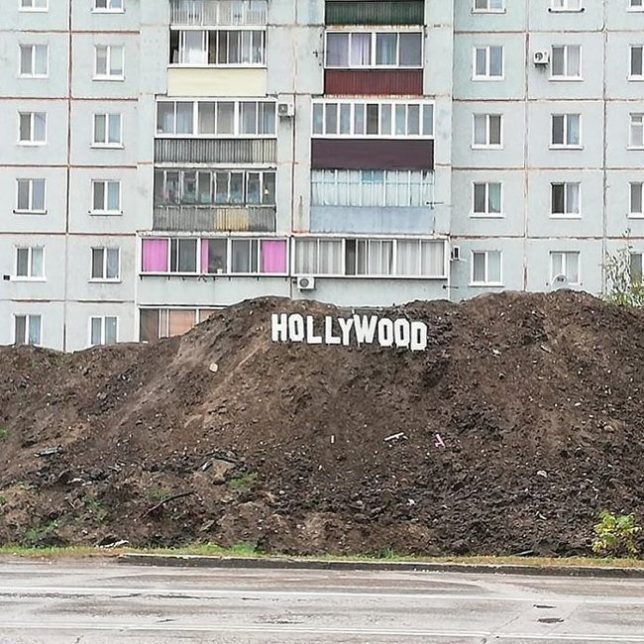 Who says Russians have no sense of humor? Kudos to the anonymous, presumably vodak-fueled prankster-ski who saw in a heaped-up mountain of excavated mud an opportunity to evoke something better. Will the sign help boost property values in the Soviet-era apartments lurking just beyond? Probably not – but one hopes it puts a smile on residents’ faces. That’s a wrap, roll credits.