The truck stops here… stops serving, that is, and these closed and abandoned food trucks won’t be serving anything soon unless it’s as scrap metal. 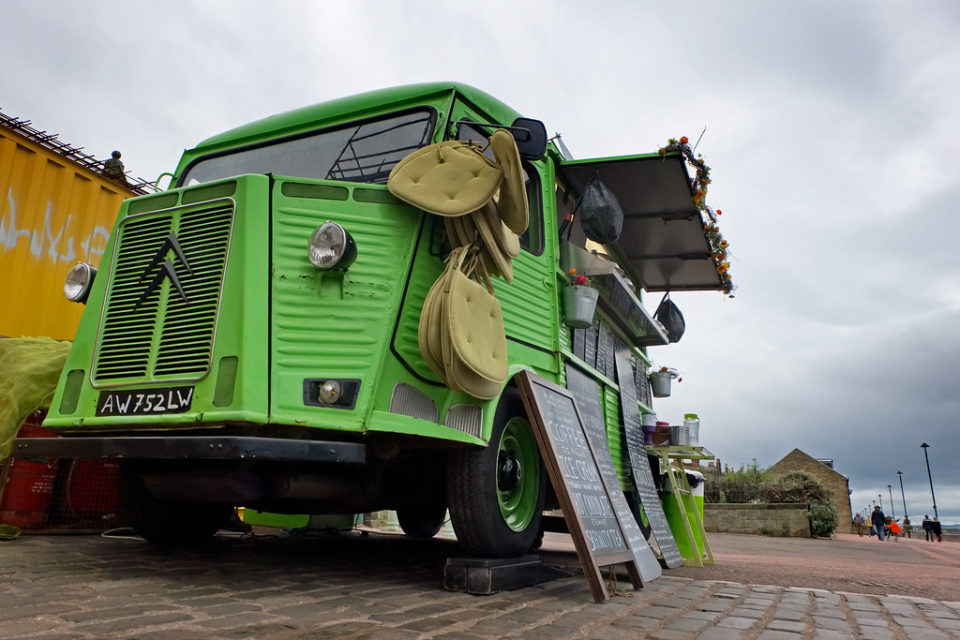 Visitors to the promenade and beach at Portobello in Edinburgh, Scotland will likely recall The Little Green Van and may have even enjoyed some of the delicacies sold during business hours. Sadly for Flickr members byronv2 and martin Hartland, however, their visits in November 2014 and October of 2017 (respectively) did not occur at the optimum times, leaving them… green with envy? 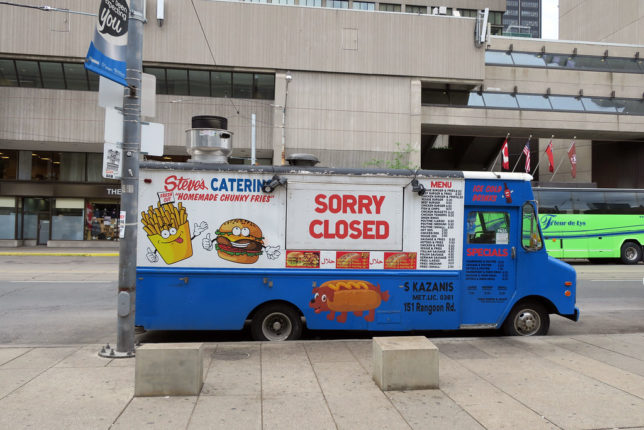 This quintessentially (and apologetically) Canadian food truck is surely courting a parking ticket from Toronto’s notoriously industrious parking patrol. Then again, the disturbingly anthropomorphic illustrations on the side of the Steve’s catering truck – not to mention that horrifyingly hot hotdog dog – just might keep the urban revenuers away ’til the owner can cheese it. Flickr member Daniel Lobo snapped the van-glorious vehicle in July of 2017. 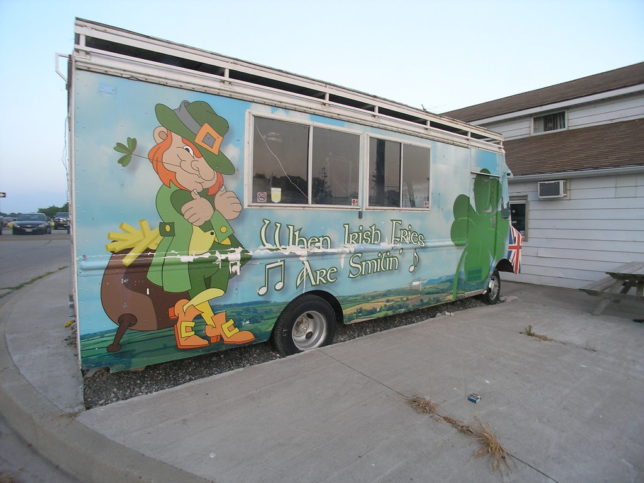 Time was, visitors to the Kingsville Ferry pier could score a meal of delicious deep-fried perch from the cringingly stereotypical O’Ryan’s Fish and Chips food truck. That was then, this is… well, let’s just say “Lake Erie gonna be eerie” and leave it at that. 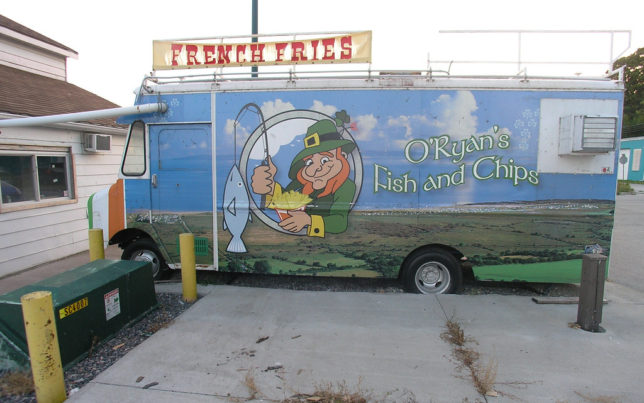 While Irish fries may be smiling, there’s been no actual frying inside the long-park abandoned food truck for ages. According to photographer and Flickr member stephenweir, the converted step van “is now rusting into oblivion”… or should that be “O’Blivion”? 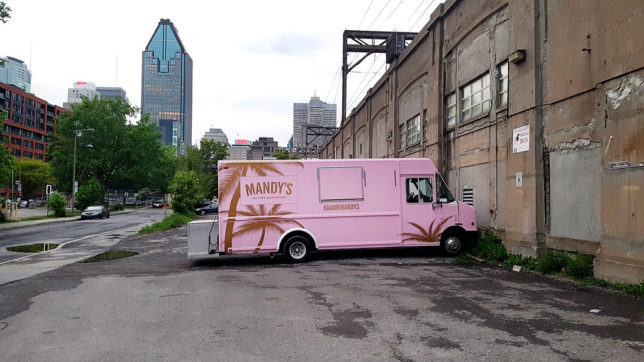 “Oh Mandy’s, well you came and you gave without taking”… which might explain why this awesome pale pink food truck is parked in back of a gritty Montreal factory instead of serving pricey gourmet salads to working stiffs and stiffettes. Also, does Barry Manilow know you raid his food truck? You mess with the bull, he honks the horn. Flickr member Coastal Elite captured the forlorn yet still blushingly beautiful food truck in late May of 2017. 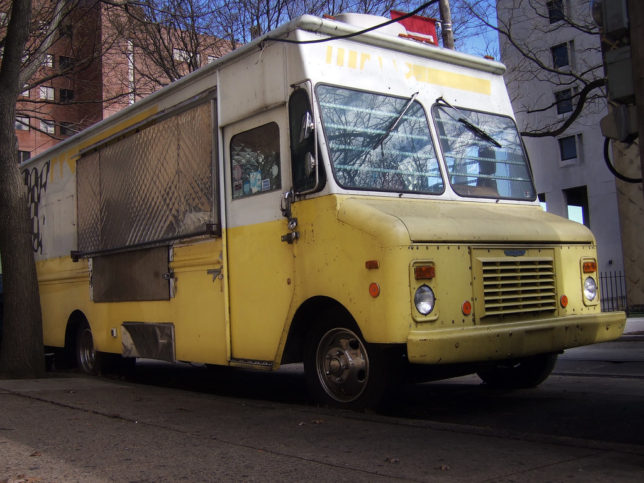 The paint has faded, the lettering’s been stripped and it’s wonder this weathered old former food truck still has its hubcaps – among other things. We’re not saying Templetown is a bad neighborhood, just that life in Philly isn’t exactly a picnic. 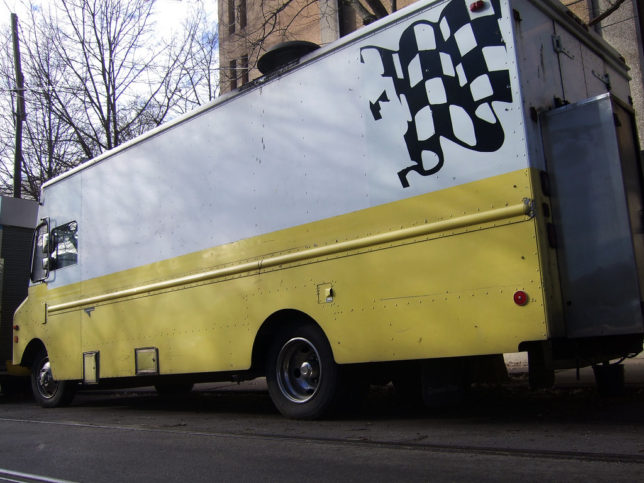 Picnics may be coming back in style, however, as students attending nearby Temple University have been known to eat and drink like, er, university students. Seems like a great location for a food truck… just not THIS food truck. Flickr member Ezra Wolfe snapped the seen-better-days food truck in early January of 2009.

It’s Been A Slice 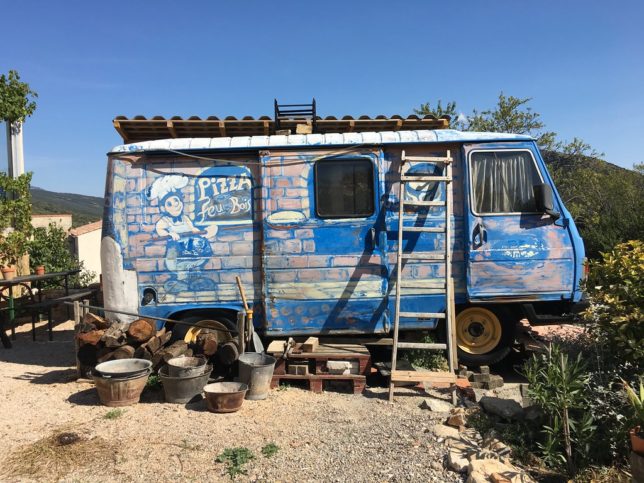 Flickr member Christine und Hagen Graf don’t state exactly (or even inexactly) where this old abandoned food truck is located but if the Mediterranean-looking landscape and the Euro-look of the van itself are any indication, it may be the south of France. By the way, the much-faded “Pizza au Feu de Bois” legend on the truck’s side translates to “Wood Oven Pizza” so you’ll know what you’ve been missing. 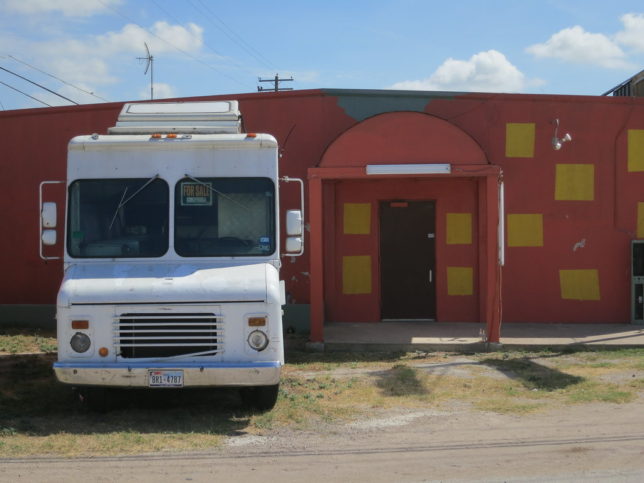 It’s not too late to jump aboard the booming food truck bandwagon, you just need the right food and, of course, the right truck… like this one. Better yet, it just happens to be For Sale according to photographer and Flickr member Paul Sableman, who captured the slightly worse-for-wear step van in July of 2013. OK, yeah, that was over six years ago but what are the odds the snow white van’s still parked out there in Austin, baking away in the Texas sun? Sometimes, “hot” deals DO last this long.