Featuring the architecture firm’s signature undulations and parametric curves, the new Daxing Airport in Beijing by Zaha Hadid Architects will accommodate 72 million travelers per year by 2025. Launching on October 1st to coincide with China’s 70th anniversary, the airport is nicknamed “the starfish” for reasons that become obvious when you see it photographed from above.

? Beijing Daxing International Airport ,located on the border of Beijing and Langfang, Hebei Province, is Beijing’s second international airport and is currently under construction. The first phase of the airport project is designed with a target of 72 million passengers, 2 million tons of cargo and mail, and 620,000 aircraft movements in 2025, with plans to handle 100 million passengers in the long term. The terminal building was designed by ADPI in collaboration with @ZahaHadidArchitects and other consultants.It will consist of a central hub with six curved spokes. Hong Kong design studio #Lead8 was appointed as lead designer of the commercial terminal in 2018. 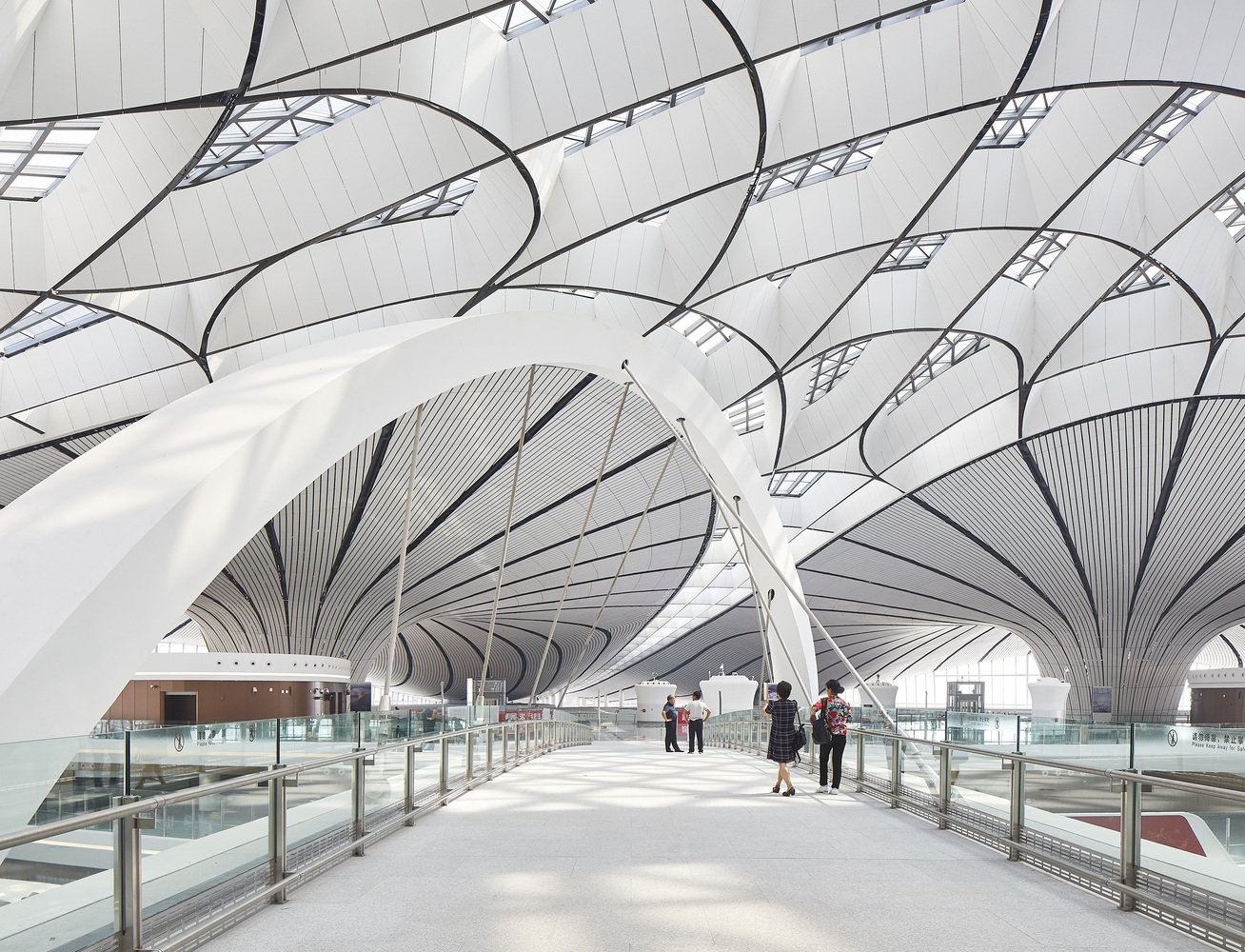 Boasting the world’s largest single-building terminal, Daxing Airport was developed to ease congestion at the existing Beijing Airport. But don’t expect to fly through it anytime soon: it’s basically getting a soft launch, with only China United Airlines flying domestic flights there through October 27. Other Chinese and international airlines will slowly start scheduling flights through Daxing after that, with relocation expected fo finish in 2021. 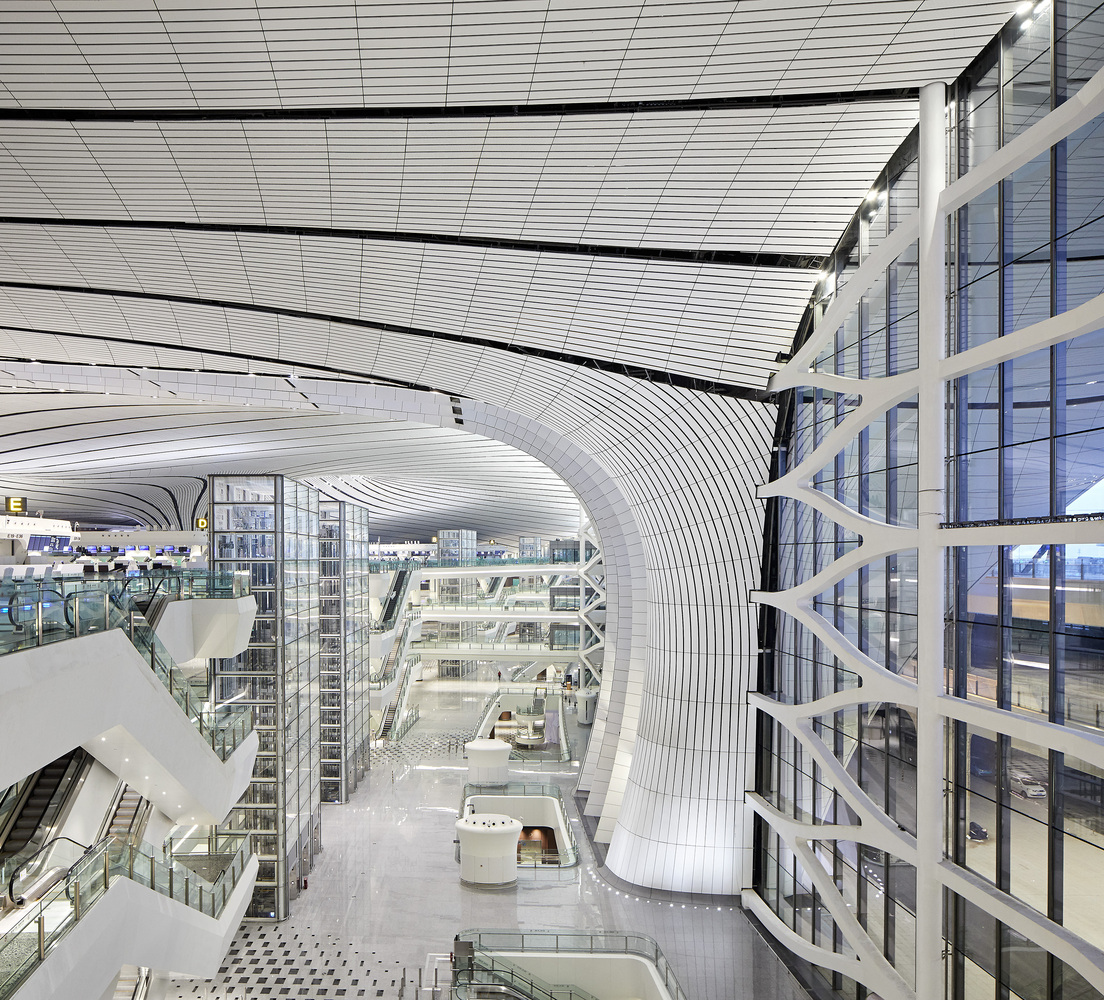 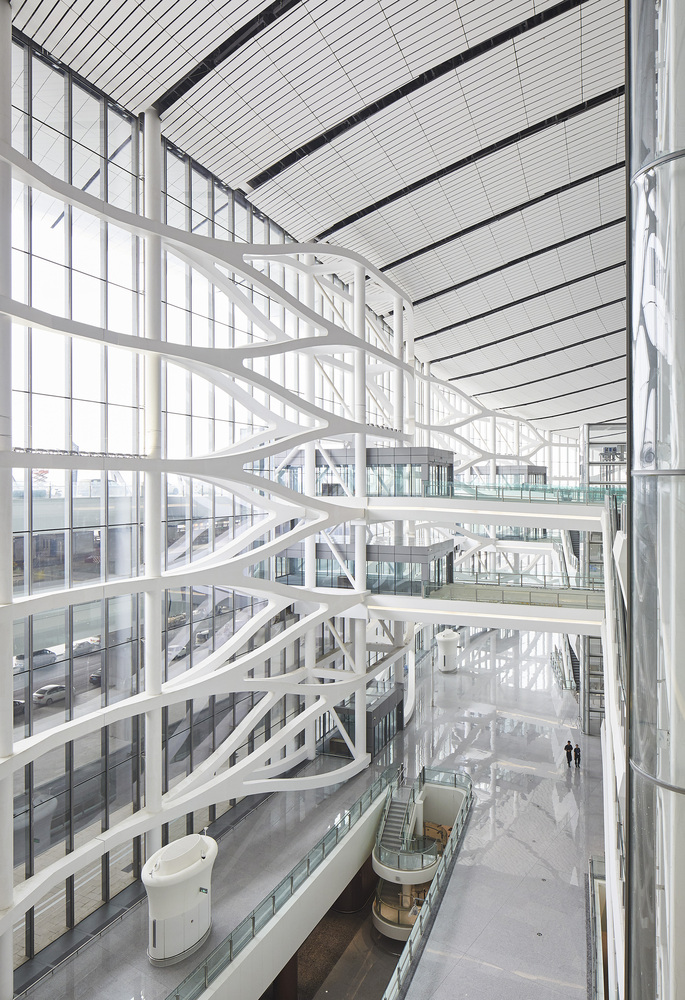 “Echoing principles within Chinese architecture that organize interconnected spaces around a central courtyard, the terminal’s design guides all passengers seamlessly through the relevant departure, arrival or transfer zones towards the grand courtyard at its center – a multi-layered meeting space at the heart of the terminal,” say the architects.

“Eight flowing forms within the terminal’s vaulted roof reach to the ground to support the structure and bring natural light within, directing all passengers towards the central courtyard. Natural light also enters the terminal via a network of linear skylights that provide an intuitive system of navigation throughout the building, guiding passengers to and from their departure gates.” 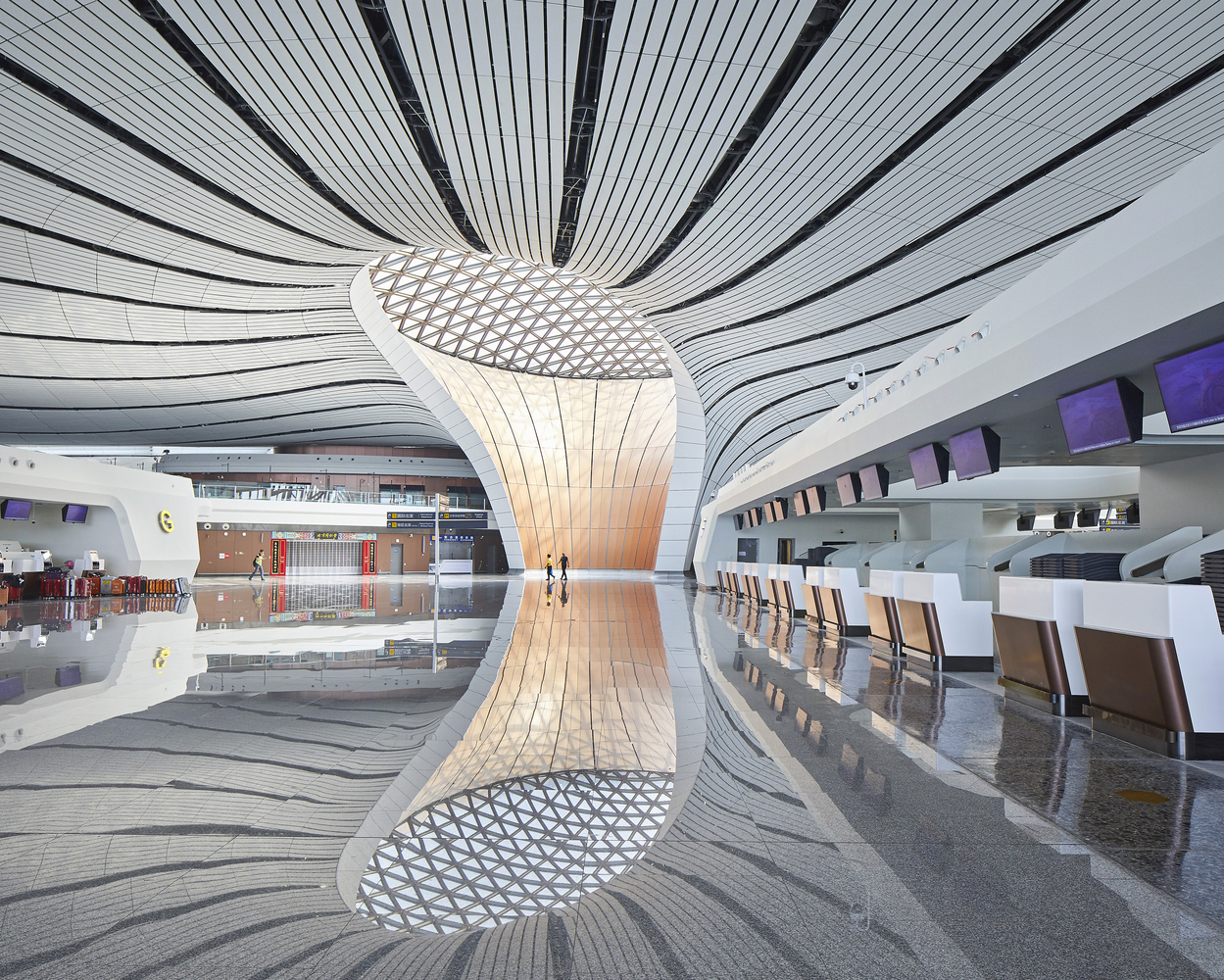 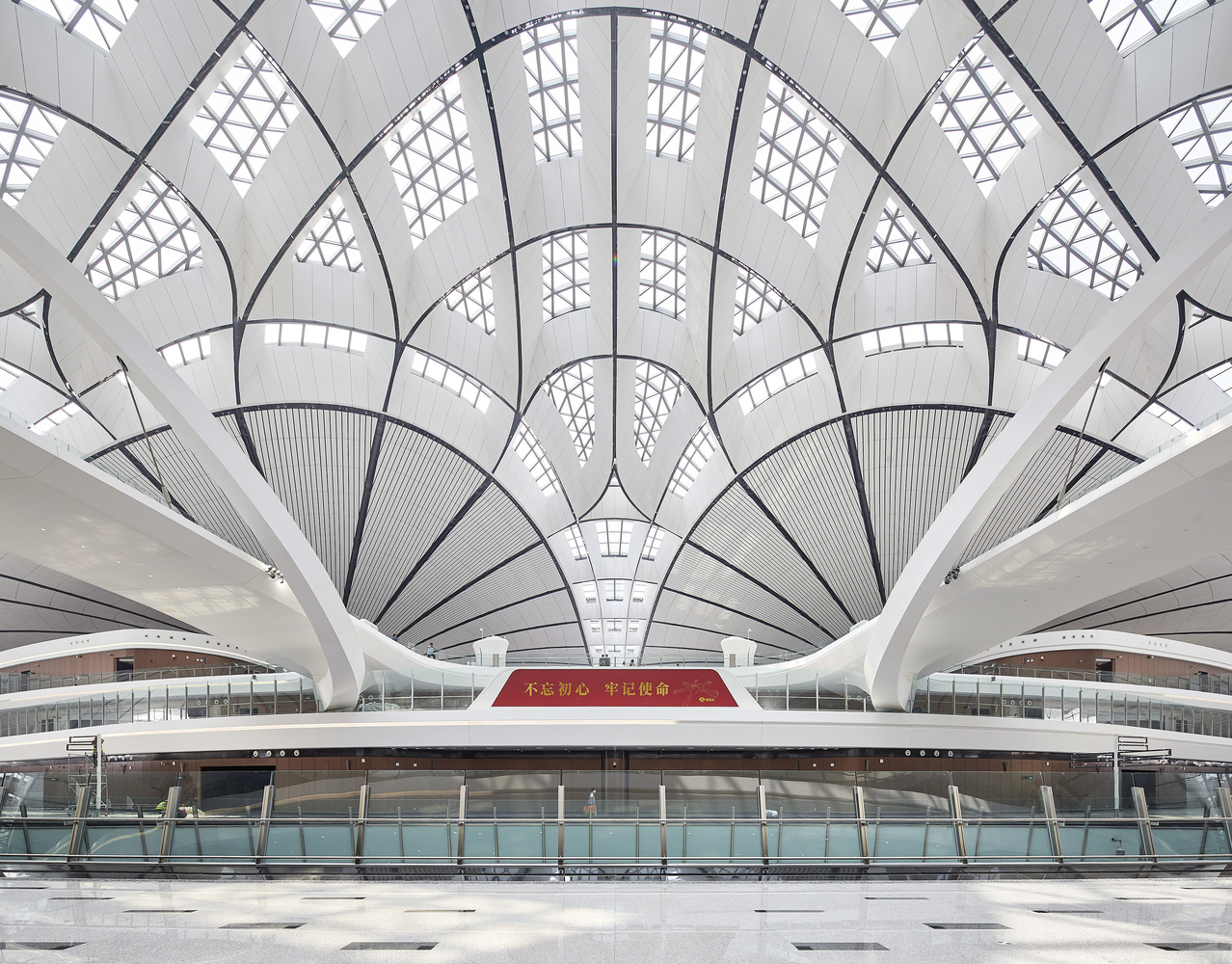 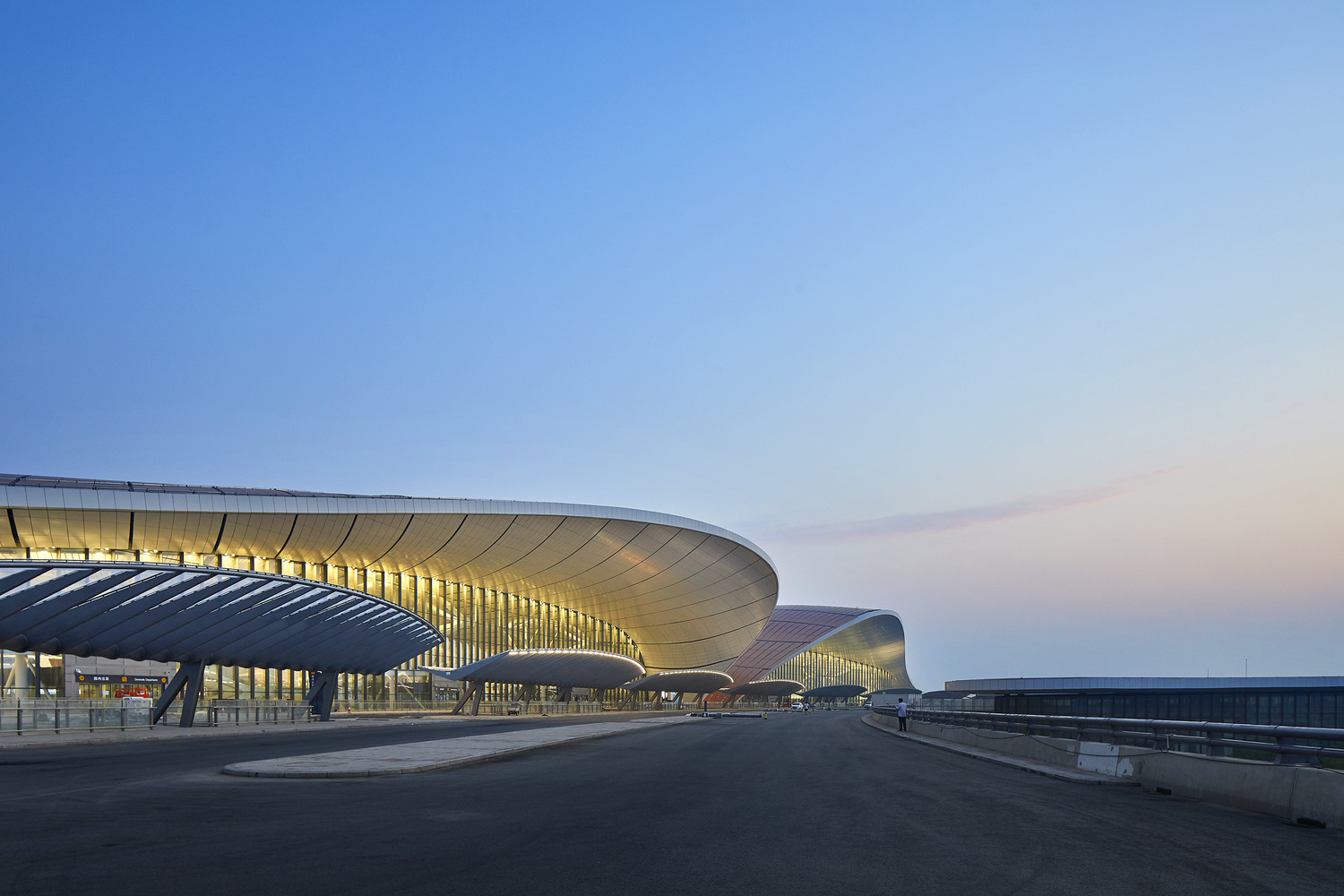 “The compact radial configuration of the terminal allows a maximum number of aircraft to be parked directly at the terminal with minimum distances from the center of the building, providing exceptional convenience for passengers and flexibility in operations. 79 gates with airbridges connect directly to the terminal while BDIA’s facilities can quickly process the passengers of six full A380 aircraft simultaneously.”

The new airport’s code is PKX. It gets a portion of its power from solar panels, and its centralized heating with waste heat recovery is supported by a ground-source heat pump system. The airport also features rainwater collection and the natural storage, permeation and purification of up to 2.8 million cubic meters of water in new wetlands, lakes and streams to counter the “heat island” effect on the local microclimate in summer.