Artist Jenny Holzer is known for making public statements that can’t be ignored, and her latest project brings stark messages about gun violence to the facades of New York City’s Rockefeller Center. For “VIGIL,” a three-night installation that took place October 10-12, Holzer projected poems by teenagers impacted by school shootings, texts from the compilation “Bullets into Bells: Poets & Citizens Respond to Gun Violence” and stories from “Moments That Survive,” a collection by Everytown for Gun Safety.

@jennyholzerstudio‘s VIGIL, the latest project from @creativetime. For VIGIL, Holzer projected texts from people reflecting on gun violence onto three buildings at @rockefellercenter. . Watching the projections and the crowds last night, I considered how some portion of the visitors there might spend a good chunk of time Rockefeller Center, shopping or ice skating or taking photos or whatever, without noticing or paying close attention to the projections. They’d ignore these powerful testimonies, in some way its own comment on how we fail to confront gun violence in America. I mentioned the idea to a friend, who replied, “but imagine: all these families taking their photos with VIGIL incidentally in the background will eventually get home, look at their photos, and read the text the first time.” Holzer has infiltrated New York tourist family photos. #vigiljennyholzer

Presented in collaboration with the public arts organization Creative Time, “VIGIL” leaves onlookers no choice but to absorb and grapple with these messages and testimonies. The project aims to center the voices of those directly affected by gun violence, shifting away from using faceless statistics to emphasize the human toll. 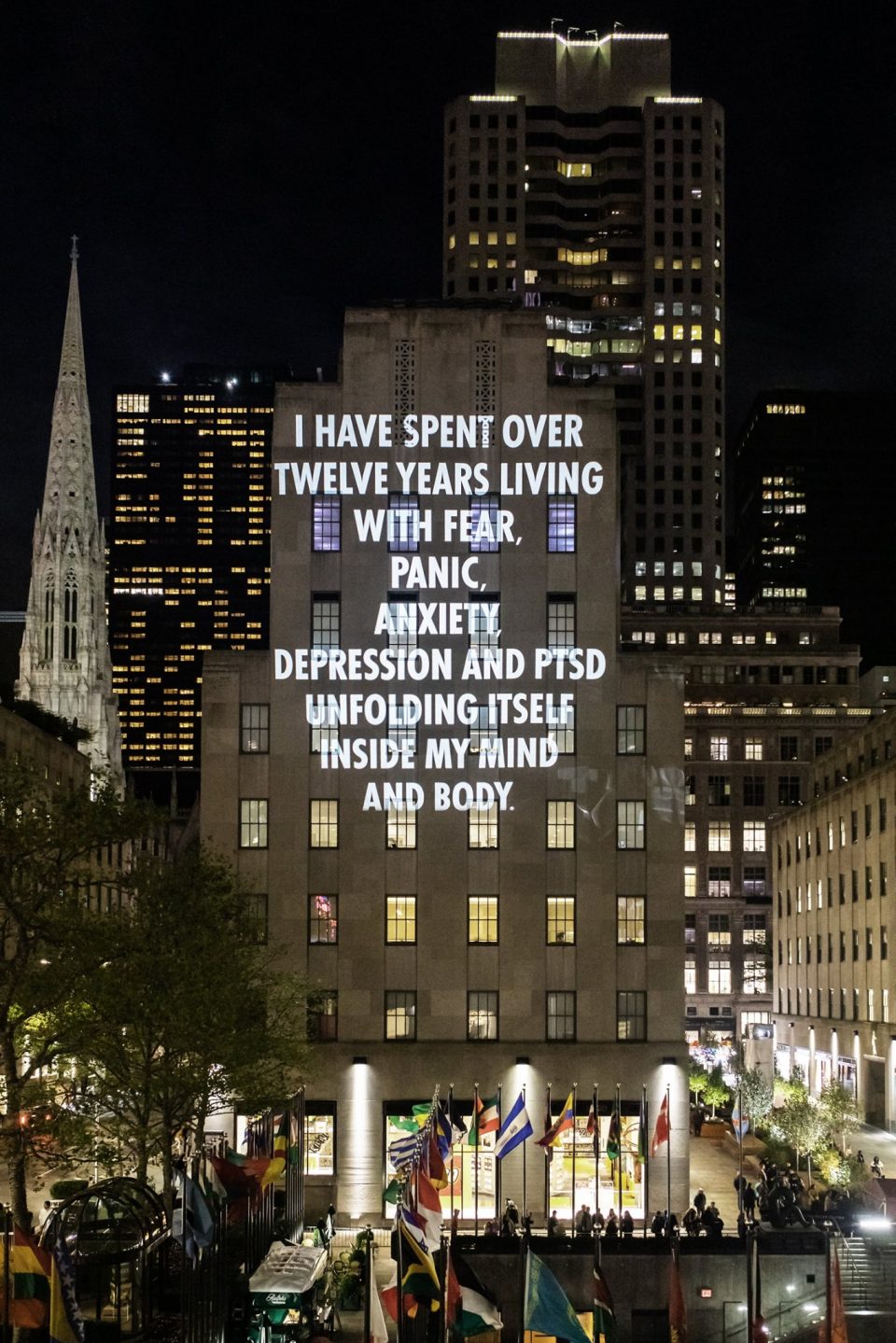 “Projected onto one of the most iconic landmarks in New York City, VIGIL speaks to the massive impact gun violence has not only on individuals, but the very fabric of communities and cities,” reads Creative Time’s curatorial statement on the project. “The text encroaches on the facades and windows of these buildings, surrounding the viewer and enveloping the city in messages of light. Through the project, the city itself is transformed.”

Last night was the last run of VIGIL by Jenny Holzer at Rockefeller Center. Thank you to @jennyholzerstudio for envisioning this project and for your collaboration. Thank you to the survivors and poets that took part in the project including those from @everytown and #bulletsintobells. Thank you to the team at @creativetime for your dedication and hard work realizing this project. Thank you to all the people that came out in support of it over the last three days. It has been a profoundly moving experience. We must not become numb to the realities of gun violence in this country. We cannot accept this violence as normal. #VIGILJennyHolzer 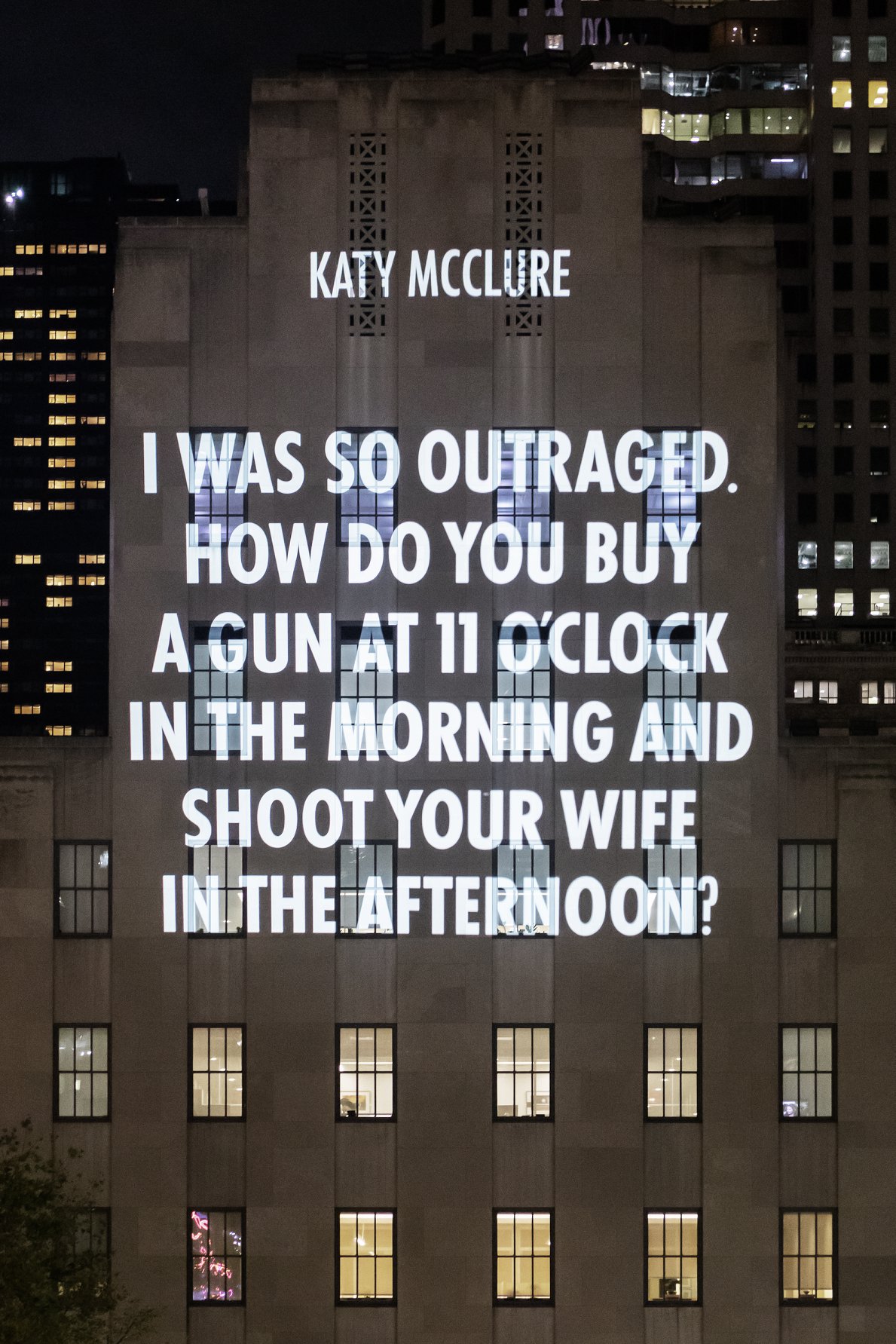 “The scrolling words of Holzer’s projections demand that the audience reads them. This strategy denies passive engagement, as viewers internalize these messages by hearing the text in their own voice. It is not possible to let these words just wash over. Since 1991, Holzer has used this technique to address such issues as domestic violence, war, and the corruption of power. Throughout her career, she has aimed to bring to light that which is hidden. In her ongoing project It Is Guns, trucks equipped with LED screens share pointed texts by the artist similarly addressing gun violence. Holzer expands upon these issues in VIGIL, magnifying her messages from the street to the cityscape.”

Sometimes we stumble and fall, it doesn’t mean we are failures, it simply means we are moving forward. – Gift Gugu Mona . . 10.13.19 Ice skating last night at Rockefeller Center #NewYorkCity . The rink is finally open for the season! And I also caught the last night of ‘Vigil’, Jenny Holzer’s project with Creative Time. . Vigil is a series of light projections which include testimonies, stories, and poems by people confronting the everyday reality of gun violence. . #SeeYourCity #VigilJennyHolzer

See more photos of the installation at Gothamist.