A WebUrbanist reader pointed out a potential problem with posting even really fascinating guerilla marketing images: such images are inevitably free advertising for the companies the advertise for, whether we like it or not. With that in mind, this is a follow-up post that shows (and links to) other forms of amazing but non-commercial forms of urban street art, from silly and creative projects to works both sublime and socially relevant. 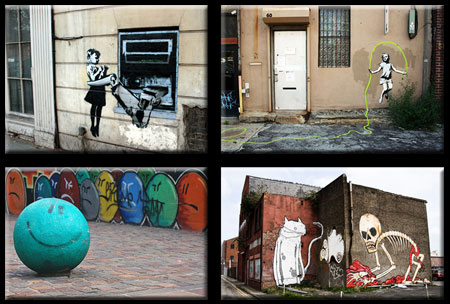 Street art comes in many forms. Some of it is clever and cool, while other projects are designed to make people reconsider their role in the city. Spray-painted graffiti is, of course, what everyone thinks of, but it is by far not the only media. Some works are strictly two dimensional, while some play with the third dimension directly or by allusion. What constitutes ‘good’ street art is, of course, in the eye of the beholder. The above art starts to show this range – from playful to serious, raw to thought-out.

Mark Jenkins has done an impressive series of surrealistic street art projects. Many of his works focus on subverting typical images of people and the city. As a street artist, he successfully causes passers by to stop and rethink their relationship to the urban environment.

This classic series of sidewalk street art drawings done in chalk remains incredibly compelling. Of course, the success of these works relies upon the particular perspectives of viewers. In a way the images are perhaps more impressive than the reality, though the images are very impressive indeed.

A similarly pseudo-realistic approach is perhaps more successful when applied to buildings. Though they still rely on perspective for their effects, this series of 3D street art building murals still works from a variety of angles an under different conditions.

Of course, not all good urban street art needs to be clever, surreal or semi-literal. Some building art, for example, simply serves to beautify the built environment. These buildings exhibit a playful set of compositional strategies and show a sensitivity to light and color.

At the other extreme, some of the most interesting street art blends into the urban environment but still causes people to think about larger issues. One graphic designer used elements that appeared to be generic street signs to make a point about homelessness in Toronto. This work shows that street art can have a social or political message, and can be subtle or even subliminal in its execution.

Moreover, not all street art is about adding layers to the built environment. One clever street artist has made an art of selectively cleaning buildings and walls. Clearly, when it comes to street art, even controlled erasure can be a source of sublime creativity. Perhaps the best (working) definition of art that binds all of these projects together is: art is what causes us to reconsier reality, to question assumptions and conventions and think outside the spray can.