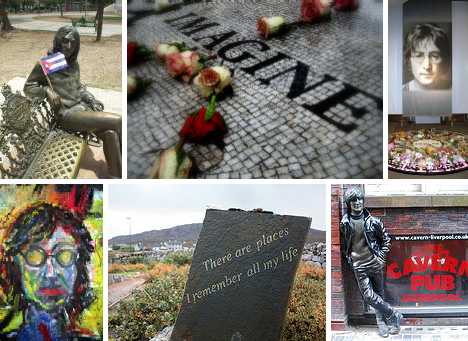 Imagine a world without memorials to the late John Lennon, it isn’t hard to do. The fact there ARE commemorative tributes to the former Beatle and peace crusader scattered across the globe in some obvious and unlikely places, however, attests to the enduring popularity of the man, his music and his message. 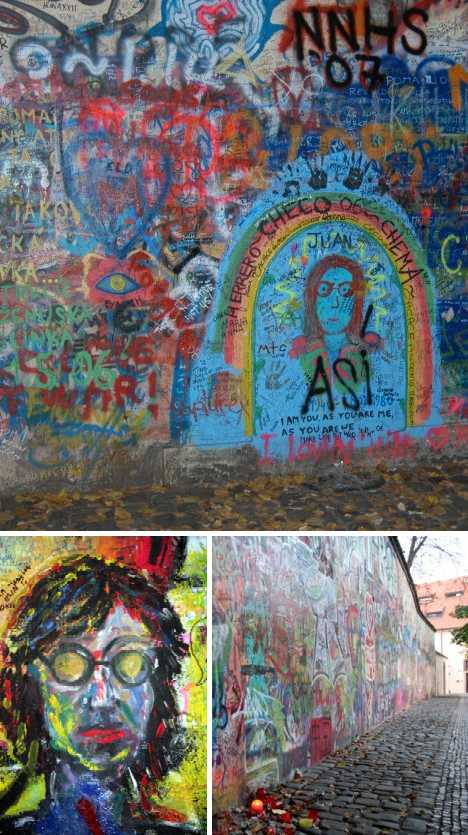 The very first memorial to John Lennon is surprising on a number of levels: it appeared spontaneously as soon as word of Lennon’s murder was announced, it’s a constantly evolving project with no set structure, and it’s in Prague, capital city of the Czech Republic. 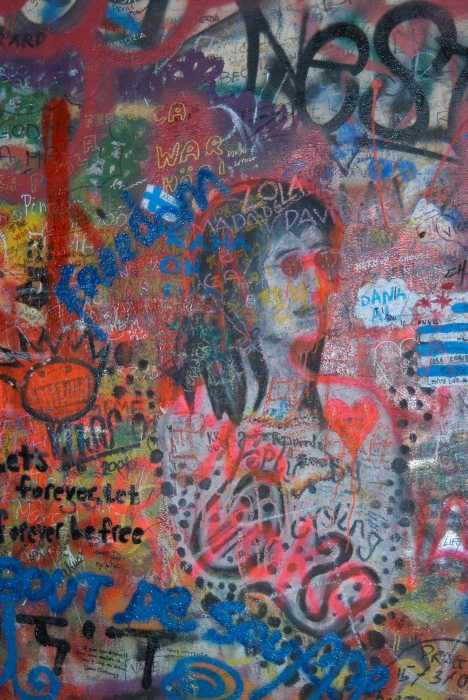 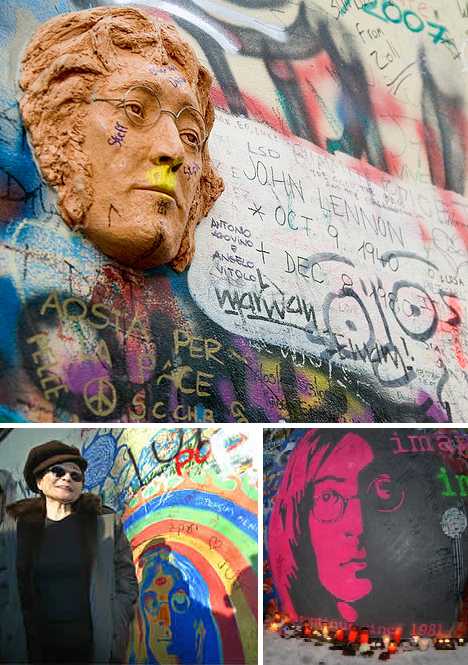 Prague was a very different place in 1980 and because John Lennon symbolized freedom of thought to Czechoslovakia’s oppressed youth, the communist authorities strongly discouraged citizens from expressing themselves artistically on the wall – to no avail. Today the Lennon Wall is a popular tourist attraction and although after 30-odd years virtually no bare stone is visible, tour guides advise visitors to “Bring your paints, and imagine world peace.” 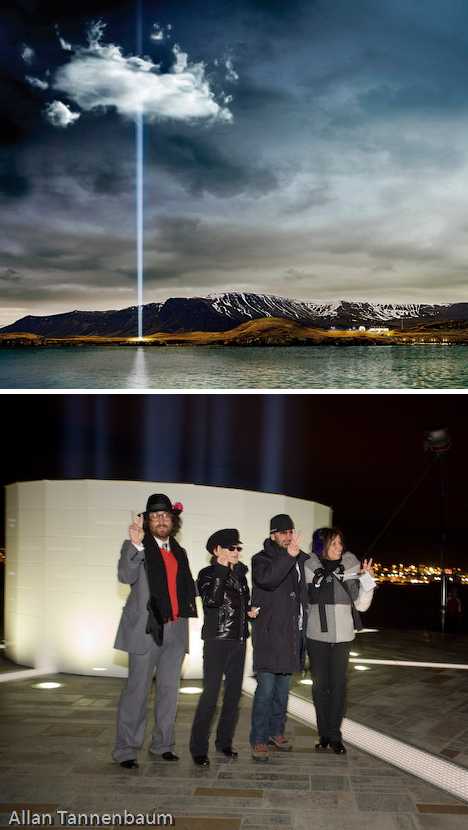 The Imagine Peace Tower, located on Viðey Island in Kollafjörður Bay near Reykjavík, Iceland, is Yoko Ono’s personal memorial to her late husband. The tower consists of a battery of 15 searchlights fitted with prismatic mirrors that enable the light column to reach heights of up to 4,000 meters (over 13,000 feet). Dedicated in 2006, the geothermic energy-powered Imagine Peace Tower is lit annually from October 9th (Lennon’s birthday) to December 8th and again for one week at the end of December and New Year’s Eve. 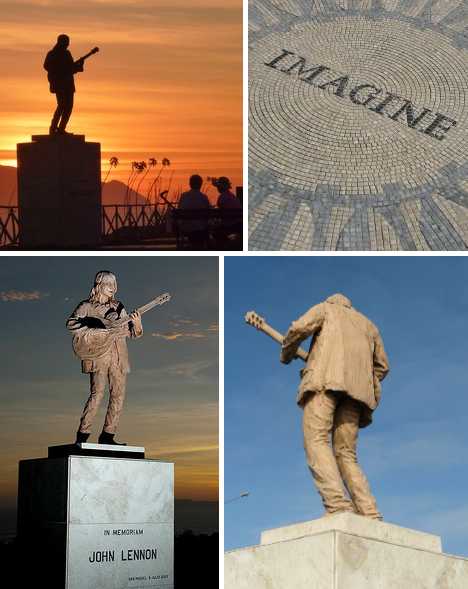 (images via: Galileus and One Journey at a Time)

A much more traditional memorial to John Lennon takes the form of a bronze statue situated in Lima, Peru’s district of San Miguel. The statue depicts Lennon in his long-haired, late 1960’s Beatles heyday and is fronted by an “Imagine” mosaic obviously inspired by the memorial circle in New York City’s Central Park. 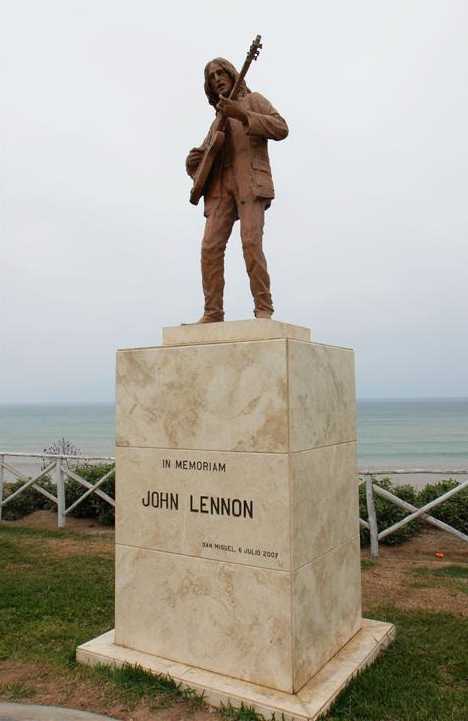 The San Miguel statue of John Lennon was dedicated in July of 2007 and overlooks the Pacific ocean shore. Though embraced by Lima’s citizens and often the site of tribute concerts, the statue was actually the pet project of San Miguel’s Mayor Salvador Heresi, an unabashed and devoted Beatles fan. 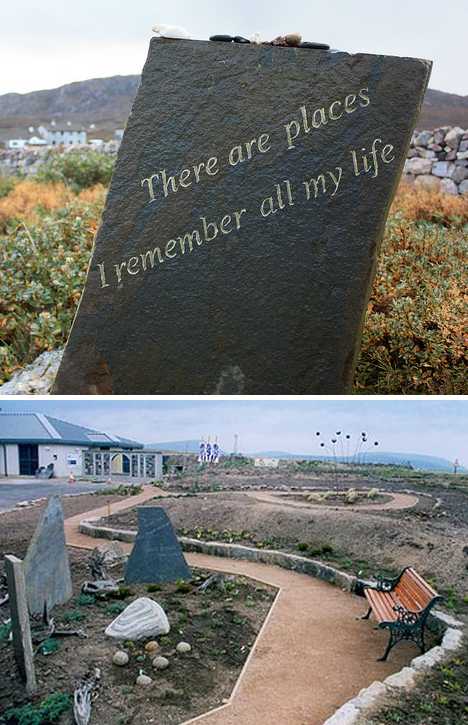 (images via: Nick Bramall and The Family Cat)

The John Lennon Memorial Garden in Durness, Scotland was opened in August of 2002 when local gardeners landscaped a small area around the village hall. The spare and somewhat spooky memorial is free of any Lennon likeness; instead, it displays the restrained serenity of a Japanese zen garden. Durness has a special connection with Lennon, who up until the age of 17 would travel to the isolated village to spend his annual summer holiday. 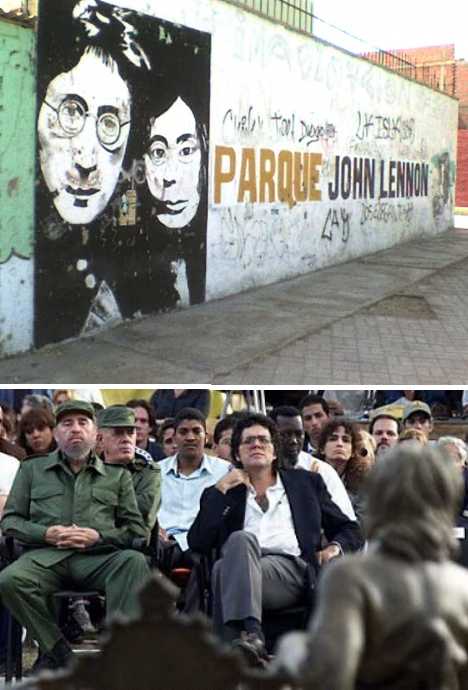 (images via: A Cuban Aleph and John-Lennon.com)

A very warm, personal and distinctive memorial statue of John Lennon sculpted by Cuban artist José Villa Soberón was unveiled on December 8th of 2000. The statue, located in “Parque Lennon” in Havana’s Vedado neighborhood, was unveiled at a special ceremony by Cuban President Fidel Castro and singer Silvio Rodriguez. The statue features a calm and relaxed-looking Lennon sitting at one end of a park bench, seemingly inviting visitors to share his space. The statue’s bronze eyeglasses have been broken off and stolen many times, however, so nowadays a guard places a pair of specs on the statue when tourists want to have their pictures taken with it. 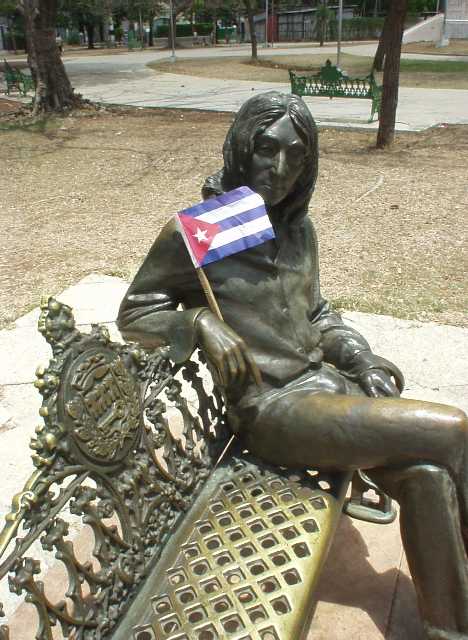 Inlaid into the tiles at the foot of the installation is an inscription that reads “Dirás que soy un soñador pero no soy el único, John Lennon”, which is a Spanish translation from Lennon’s song “Imagine.” The English lyrics are “You may say I’m a dreamer, but I’m not the only one.” It’s startling, to say the least, that Fidel Castro would not only allow both the memorial and inscription, but give them his public approval. “I am a dreamer,” said Castro at the ceremony, “who has seen some of his dreams become reality.” 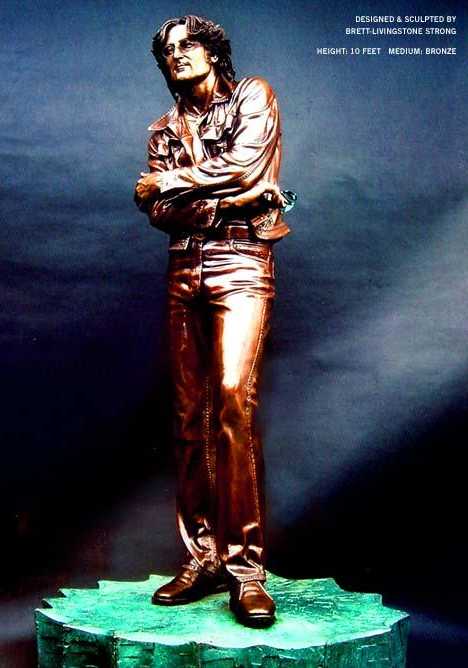 Artist Brett Livingston-Strong sculpted between 1979 and 1980 what may be the only statue of John Lennon created during his lifetime. As of April 2010, the statue (which was appraised at over $12 million) was for sale. 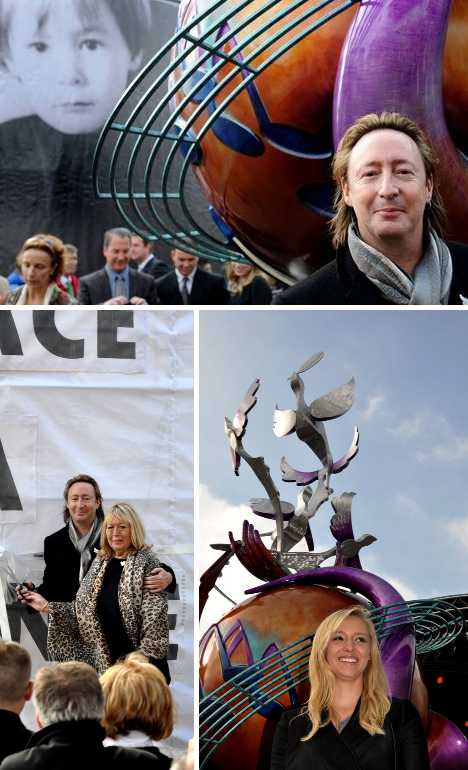 (images via: Liverpool Echo and Art In Liverpool)

The John Lennon Peace Monument (also known as the European Peace Monument) is an 18-foot tall multimedia sculpture created by American artist Lauren Voiers. The sculpture was unveiled on Saturday, October 9th of 2010 (which would have been Lennon’s 70th birthday) by Julian and Cynthia Lennon. Originally placed at Chavasse Park in Liverpool, the sculpture was subsequently moved to a more accessible area on the Liverpool Waterfront adjacent to ACC Liverpool at Kings Dock. 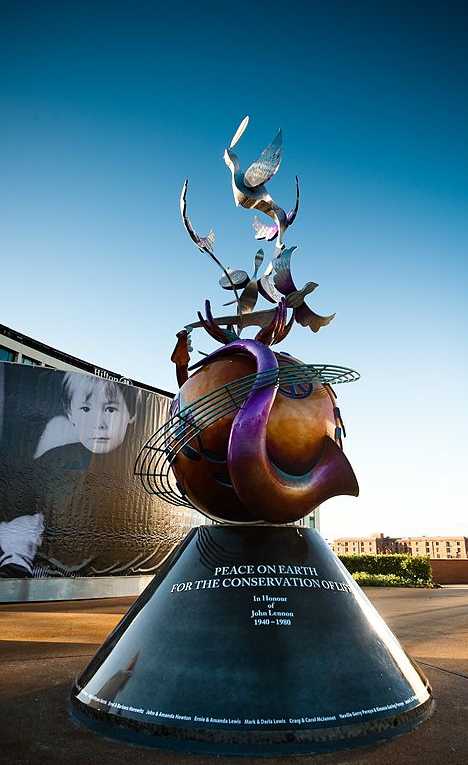 Voiers describes the sculpture entitled “Peace & Harmony” as “a beacon of light, in memory of John Lennon who devoted the later part of his life to a worldwide peace movement.” When asked about the significance of the white feather on the top of the sculpture, Julian Lennon explained that “Dad once said to me that should he pass away, if there was some way of letting me know he was going to be OK – that we were all going to be OK – the message would come to me in the form of a white feather.” 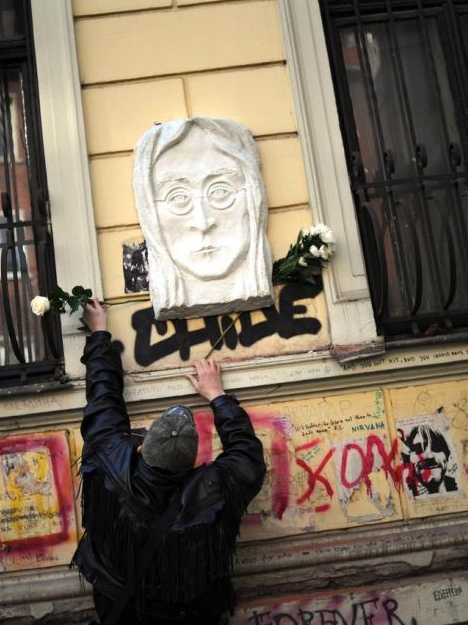 It’s been said that people in countries formerly ruled by totalitarian regimes have a special feeling for John Lennon and what he stood for: freedom and peace. So it is in Bulgaria where a new memorial honoring Lennon was opened in the capital, Sofia, in 2010 on the thirtieth anniversary of his death. 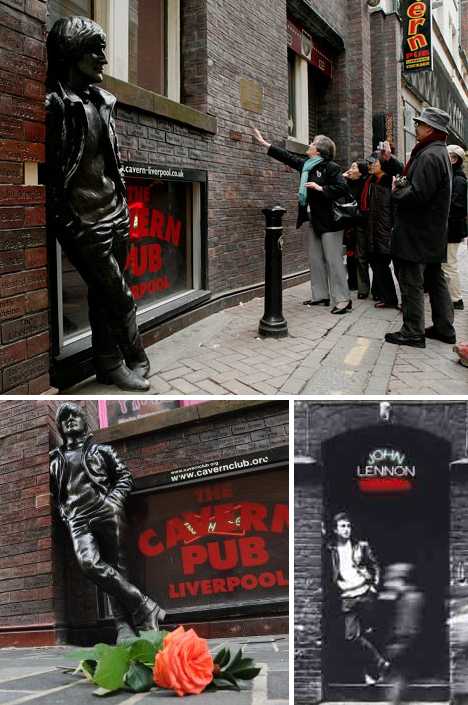 (images via: NYTimes, ClickLiverpool and Wikipedia)

As might be expected, the city of Liverpool is chock-a-block with tributes to John Lennon but one of the most arresting is the sculpture of Lennon just outside the original location of the Cavern Club on Mathew Street. The statue was unveiled on January 16th of 1997 and is strikingly reminiscent of the cover photo gracing Lennon’s 1974 oldies album, Rock’n’Roll. By the way, the trio of blurry figures walking past Lennon in the photo are Paul McCartney, George Harrison and Stu Sutcliffe. 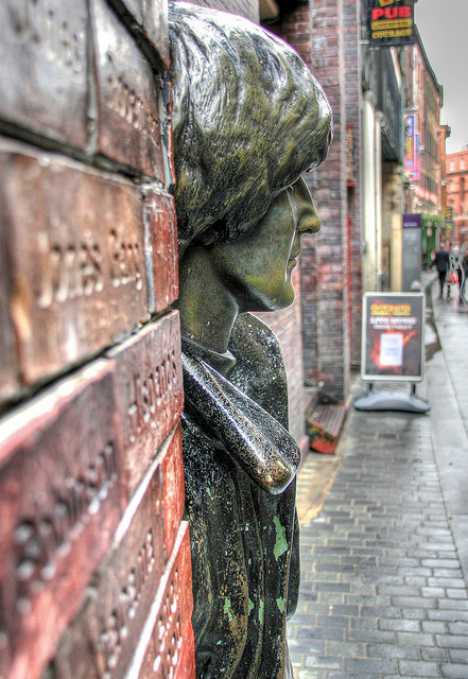 The Beatles played a total of 292 appearances at the Cavern Club between February of 1961 and August of 1963 though Lennon had played there as early as 1957 with The Quarrymen. The 1,801 inscribed bricks of The Cavern Wall of Fame behind Lennon’s statue are engraved with the names of every artist who performed at the original Cavern Club from 1957 through 1973. 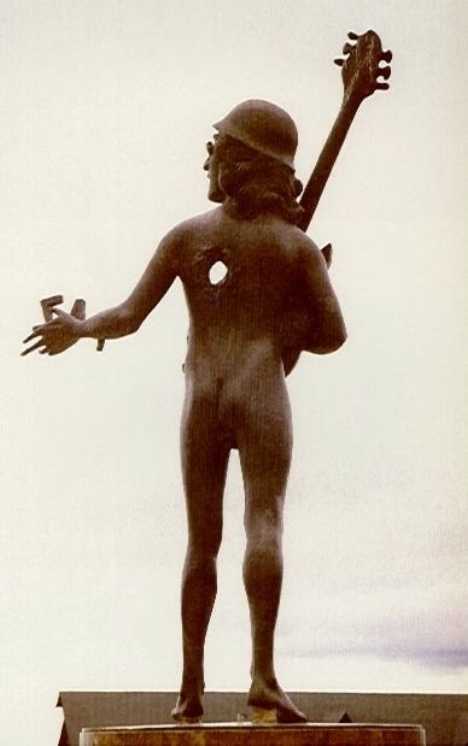 Before Carlos Lehder began serving a 135-year (later reduced to 55-year) sentence for drug trafficking, he was living the high life (literally) as a Colombian drug lord. When he wasn’t drug-lording, however, Lehder was running a German-themed resort in Pereira, Colombia. Being both a Nazi sympathizer and a Beatles fan, Lehder decided his resort needed a statue of a nude John Lennon, clutching a guitar and wearing a Wehrmacht helmet at a jaunty angle. The finishing touch was a hole in his back. This is what your brain does on drugs, it would seem. 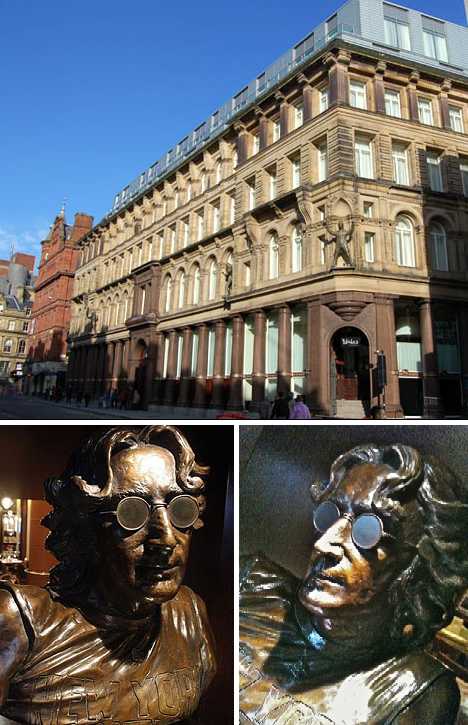 (images via: The Orthodoxford, Telegraph Media Group ltd. and The Vibes)

The four-star Hard Days Night Hotel at the corner of Mathew and John Streets in Liverpool opened in February of 2008 and is the world’s only Beatles-themed hotel. While the wealth of Lennon statuary and sculpture in and on the hotel isn’t meant to be a memorial per se, visitors and guests are free to experience their own interpretation (statue by Laura Lian). 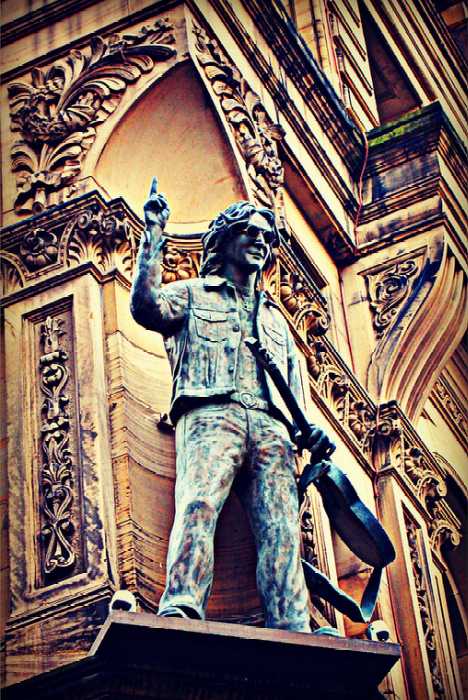 John the Beatle or John the Baptist? This spectacular shot highlights the John Lennon statue situated in the front facade of the hotel. The conjunction of the modern statue with the hotel’s 19th century florid stone architectural detailing comes off better than one might think while solidly anchoring Lennon in Liverpool’s long and illustrious history. Oh, and he’s actually flashing a peace sign with his upraised hand, not pointing the way to heaven. 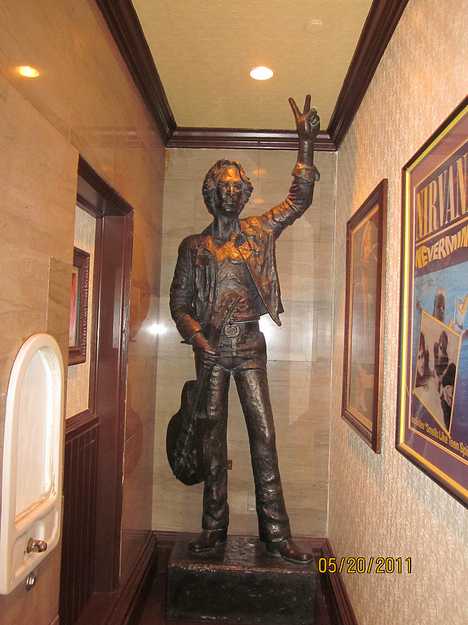 Originally displayed at the 1984 Liverpool International Garden Festival, this statue of John Lennon by sculptor Allen Curran now stands atop the stairwell to the restroom at the Hard Rock Cafe in Washington DC. Give pee’s a chance? 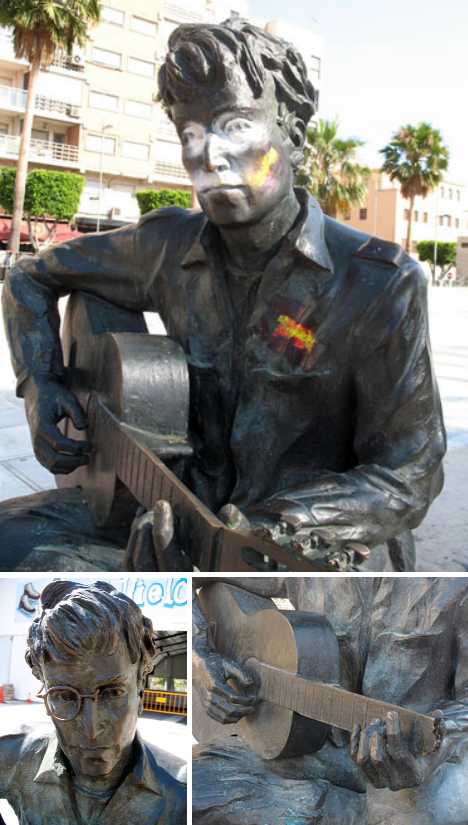 How the mighty have fallen: this charming, life-sized bronze statue of a relaxed, guitar-playing John Lennon once sat on a tiled portico outside the town hall in sunny Almeria, Spain. Sadly, vandals have repeatedly defaced and disfigured the statue for reasons unknown, to the point that city authorities ordered it be removed, repaired, and moved to a more secure location. 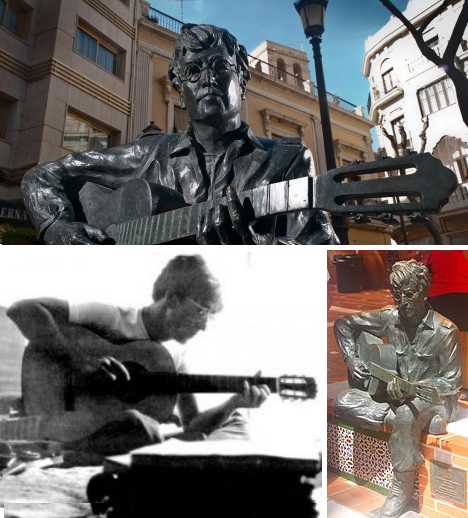 (images via: I Need Spain, Sights of Seville and Wiki Voyage)

The statue was designed by artist Carmen Mudarra and commemorates Lennon’s stay in the beach town of El Zapillo while filming the 1967 movie “How I Won The War”. In his spare time, Lennon began composing the song “Strawberry Fields Forever”. Mudarra may have been inspired by a photograph of Lennon sitting on his bed, composing the song and recording it on a tape recorder. 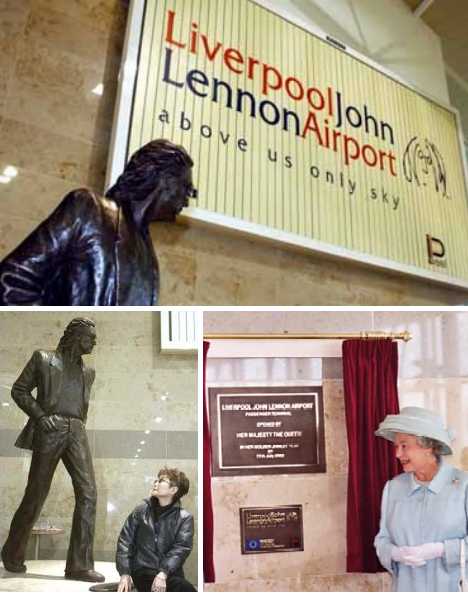 (images via: Stuck at the Airport, Gifts Infoniac and FOLA) 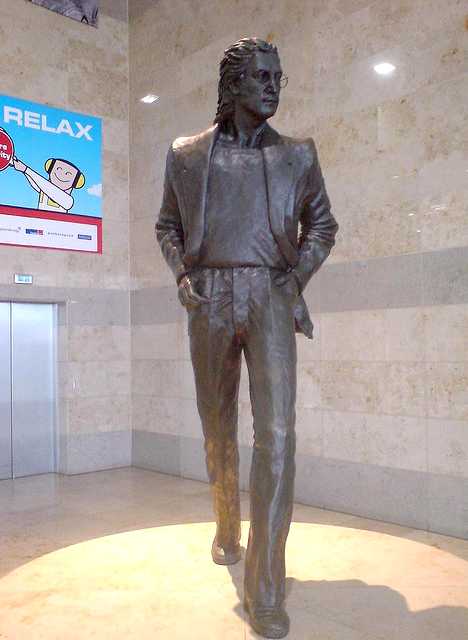 The statue depicts Lennon in his New York days, wearing a t-shirt and sport jacket. His iconic circular-lensed eyeglasses were stolen in 2007 but have since been repaired. You can find the statue situated on a marble plinth just off the Level 2 walkway overlooking the passenger check-in area. 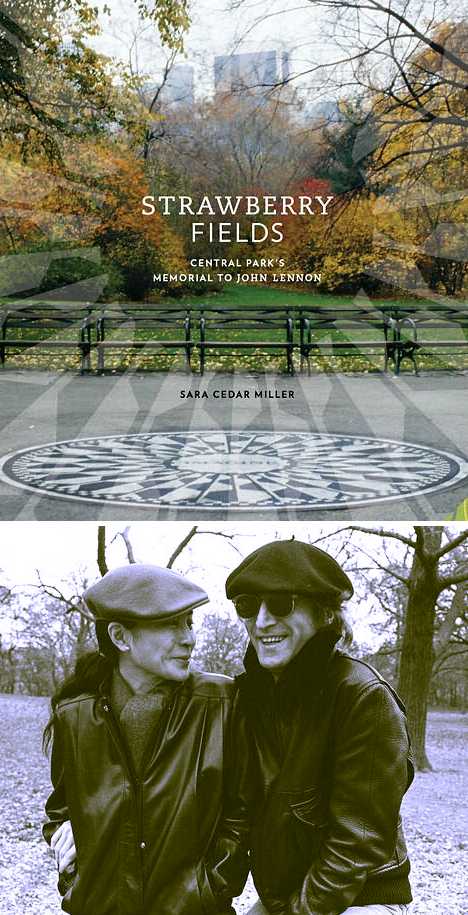 Known chiefly for its central mosaic of inlaid stones, Strawberry Fields actually encompasses a teardrop-shaped, 2.5-acre (10,000 m2) landscaped section of Central Park dedicated to the memory of John Lennon. The entrance to the memorial is located on Central Park West at West 72nd Street, just across the street from the Dakota Apartments and the spot where Lennon was shot and killed. Yoko Ono donated over $1 million to fund both the landscaping and an endowment to maintain the memorial. 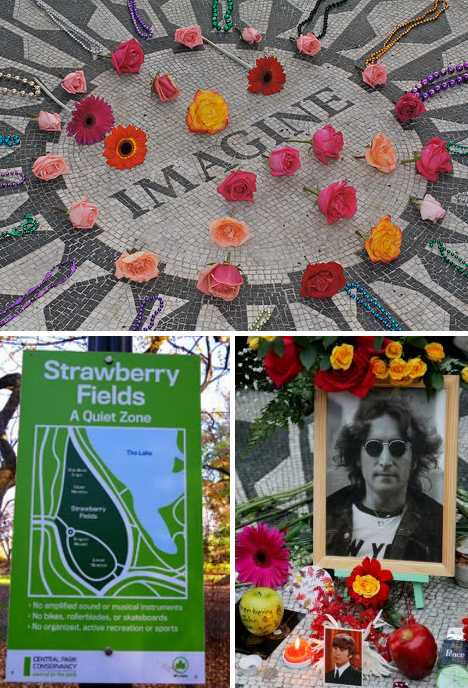 (images via: Skaines and UPI)

The central mosaic was was gifted to the memorial by the City of Naples and it was designed by a team of craftsmen from that city. The memorial at the site of what had been John & Yoko’s favorite part of Central Park was dedicated on October 9th, 1985 (Lennon’s 45th birthday), by Yoko Ono and Mayor Ed Koch of New York City. 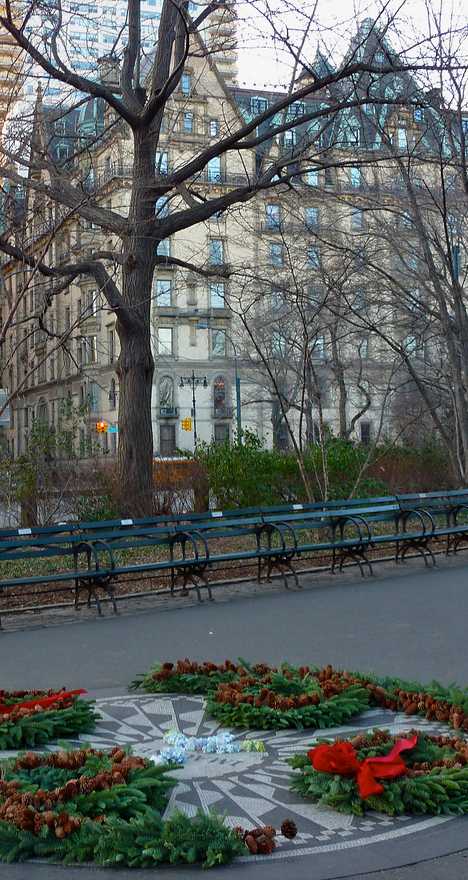 Strawberry Fields is the most popular place for fans of the late artist/philosopher to express their feelings on the anniversaries of his birth and death. On those occasions, visitors may find the central mosaic lovingly decorated with flowers, personal mementos and, of course, strawberries. 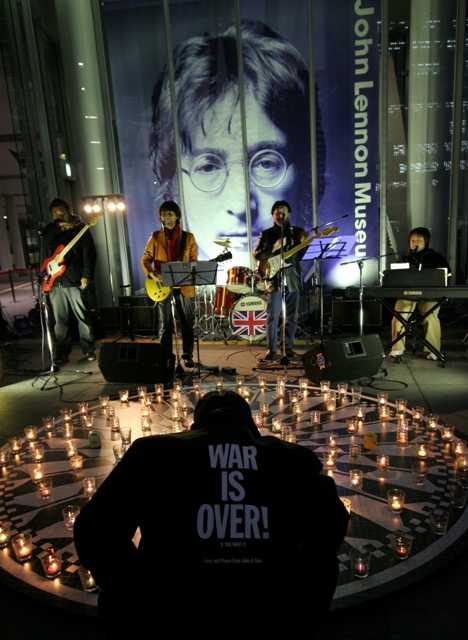 John Lennon left our world long before his time and the violent nature of his passing has left an ugly scar on societies the world over. The bespectacled Liverpudlian would have been a septuagenarian today had his life not been suddenly cut short back then. With the benefit of three additional decades, would John Lennon have had the same, lesser or greater impact upon society? One can only imagine.