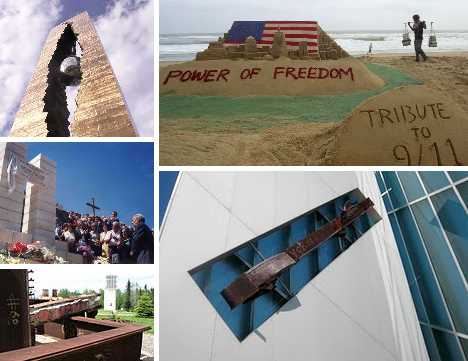 Though there are literally hundreds of monuments to the September 11th, 2001 terror attacks in the United States, memorial sculptures are much harder to find beyond our shores. These 11 international memorials to 9/11 are, for the most part, smaller in scale and more personal in design, reflecting the subtly different ways 9/11 is interpreted and commemorated by the world at large.

Russia / New Jersey: “To the Struggle Against World Terrorism” 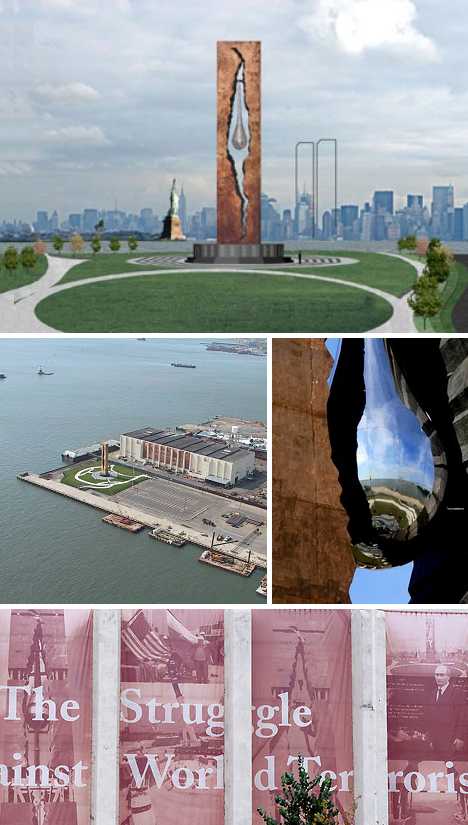 Just as the Statue of Liberty has a vital French connection, Russo-Georgian artist Zurab Tsereteli’s “To the Struggle Against World Terrorism” is a gift from “Russian President Vladimir Putin, the people of Russia and the artist” to the people of the United States. The memorial’s central 4-ton, 40-ft long stainless steel teardrop symbolizes, according to Tsereteli, “sadness over grief that will become happiness in the future when terrorism is defeated.” 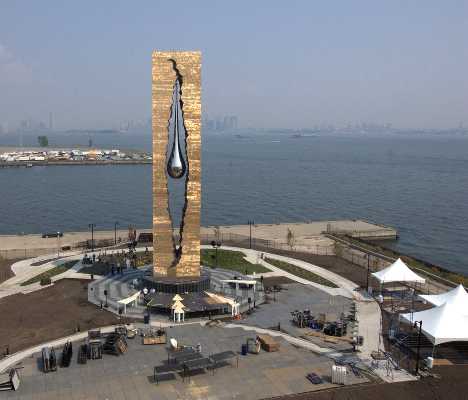 Installed in a new waterfront park in Bayonne, New Jersey, on the 5th anniversary of the September 11th attacks, Tsereteli’s made-in-Russia monument has sparked controversy over its questionable appearance, the integrated images of Presidents Putin and Bush, and uncertainty over exactly how many victims’ names should appear – the monument lists 3,024 names, 45 more than the official count of 2,979. 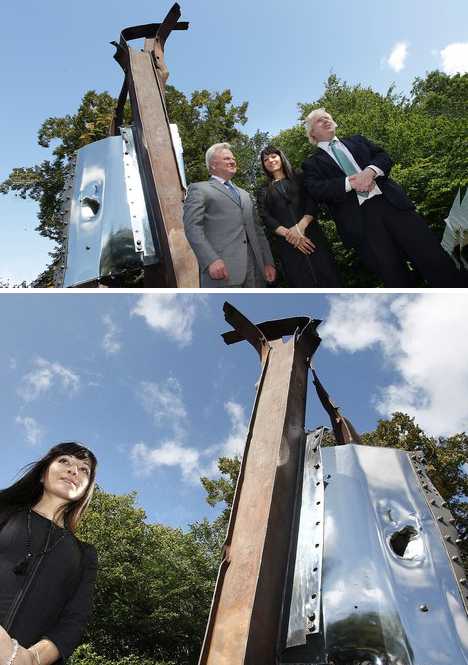 One of the newest memorials to the September 11 terror attacks was unveiled just 5 days before the event’s 10th anniversary. “After 9/11” is a 28-ft tall conglomeration of three salvaged metal pieces of the Twin Towers. Commissioned by the 9 11 London Project and designed by American artist Miya Ando, the artwork has been temporarily installed in Battersea Park while a permanent home is found to display it. 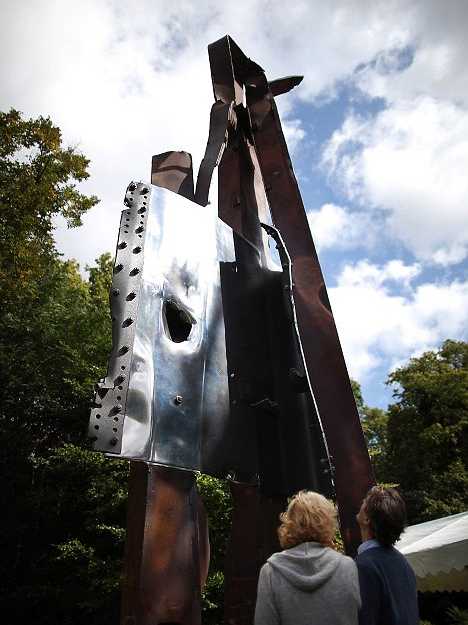 London Mayor Boris Johnson emcee’d the ceremony and injected a little humor by calling for 9/11 conspiracy theories to end. Johnson said he preferred that wacky alternative explanations for the disaster undergo a “controlled demolition”. Nice. 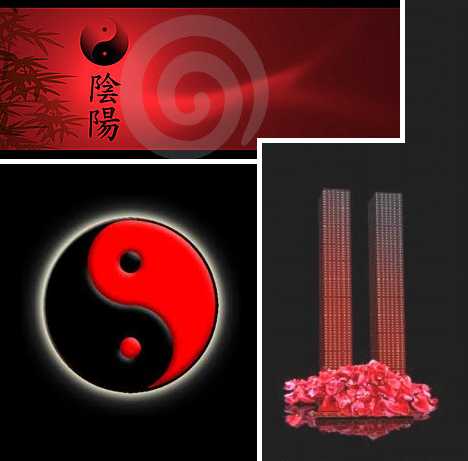 A mysterious memorial that may or may not exist… and it doesn’t matter if it does or it doesn’t. Professor Hong Wang of the China Academy of Art in Hangzhou had a dream: assemble 30 accomplished Chinese lacquer artists and, over the course of one year, create a simple yet forceful sculpture to commemorate the 10th anniversary of 9/11 and memorialize its many victims. An echoing silence from the Internet indicates Wang’s dream remained only a concept but WHAT a concept – 220 red & black lacquered trays representing the former Twin Towers, open at their front to accept rose petals placed by visitors. 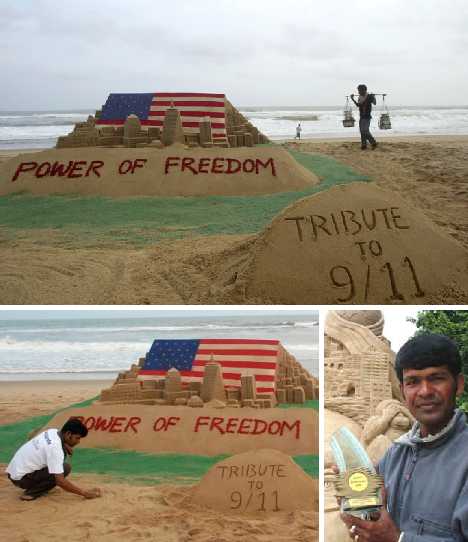 Sudarshan Pattnaik’s sublime sand sculptures may be ephemeral in nature but that doesn’t stop his work from being profoundly touching. Being able to create new versions of his 9/11 tribute on an annual basis (weather permitting) doesn’t hurt either. 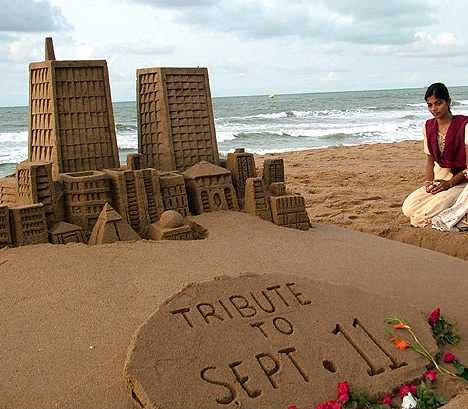 Pattnaik’s typical place of business, so to speak, is the golden sand beach at Puri in the Indian state of Orissa. While visually Pattnaik’s sand art may seem somewhat cartoonish, the award-winning artist’s work is taken very seriously in India and serve to educate the public on the universal meaning of 9/11. 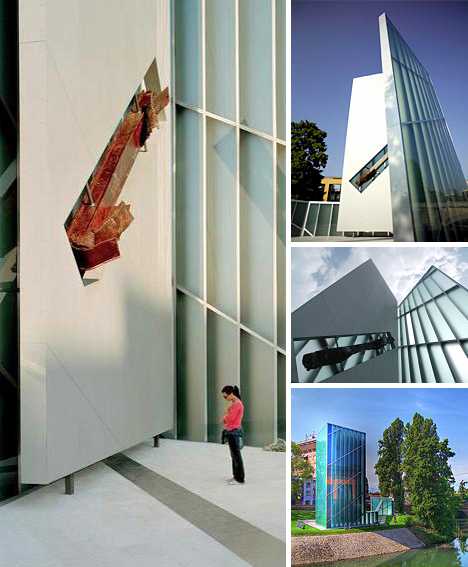 (images via: Architravel, Voices of September 11th and Padova News)

In 2005 Italy marked the 4th anniversary of the September 11 attacks with a glass and steel memorial monument entitled “Memory and Light” (Memoria e Luce), designed by architect Daniel Libeskind. Located in the northern Italian city of Padua, the memorial incorporates a twisted steel beam recovered from the remains of the World Trade Center’s South Tower. 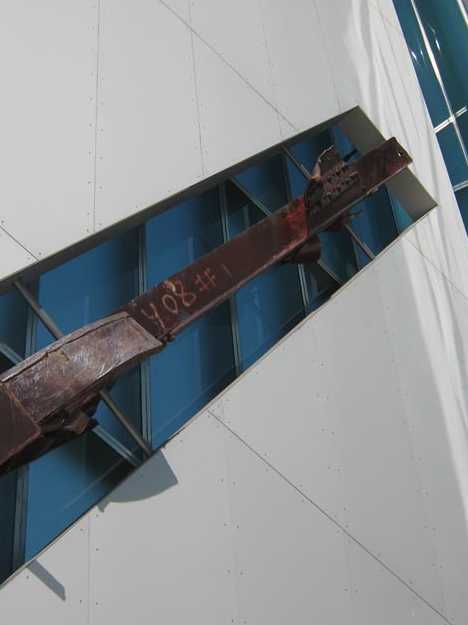 (image via: An American In Padua)

The twisted steel girder featured so prominently in Memoria e Luce still bears its original construction number, though the beam itself has been doubled back upon itself by the tremendous forces unleashed during the South Tower’s catastrophic collapse. 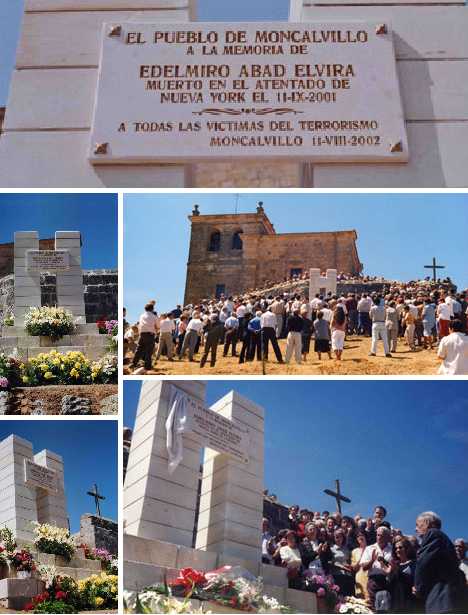 (images via: Voices of September 11th)

Of the nearly 3,000 people who lost their lives on September 11th, 2001, only one was born in the tiny town of Moncalvillo de la Sierra, Spain. Though Edelmiro Abad‘s hometown was certainly small, the approximately 100 residents of Moncalvillo de la Sierra have very big hearts along with the fervent desire to remember not only one of their own, but the event which led to his losing his life. 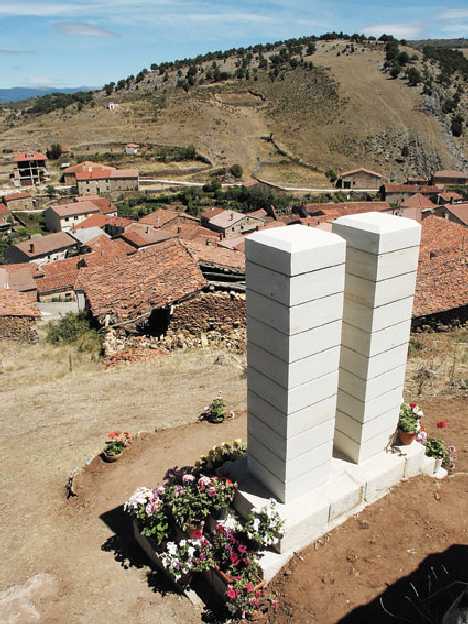 After emigrating to the United States at the age of 7, Abad realized the American Dream by rising to the position of Senior Vice-President of Fiduciary Trust Bank, and he was dutifully at his desk the morning of September 11th, 2001. Abad’s family and the townspeople of Moncalvillo de la Sierra crafted a unique memorial to their favorite son, and by extension the victims of 9/11, which stands today in the Iglesia de San Pedro church’s cemetery. As memorials to 9/11 go, they don’t get any more personal than this. 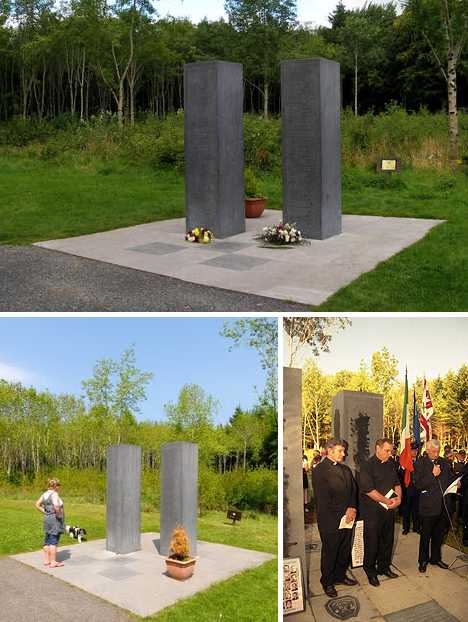 New York City’s police and fire departments have traditionally offered employment and opportunity to Irish immigrants, and the ultimate price paid by so many members of these essential services on September 11th continues to resonate in Ireland. Sean Tallon was one of the 343 firemen who died in the course of his duties that day; Tallon’s father was born in Donadea, County Kildare, Ireland. 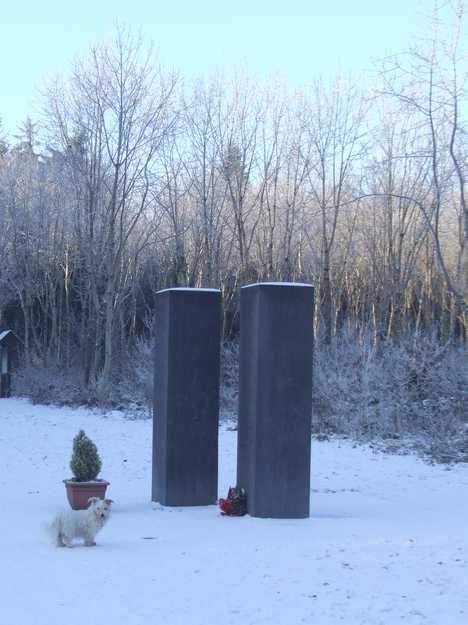 The Donadea 9/11 Memorial located in Donadea Forest Park consists of two scale replicas of the ill-fated Twin Towers carved from locally-sourced granite blocks. The blocks are engraved with the names of those emergency service men and women who died in the line of duty on September 11th, 2001. The memorial is surrounded by a copse of newly planted Oaks that are expected to live for at least 100 years. 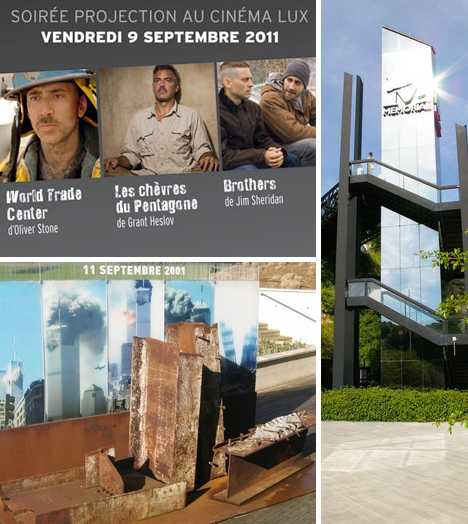 The Caen Memorial opened in 1988 and is considered to be the country’s finest World War II museum. Expanded in 2002 to include post-war events, the Caen Memorial bears the distinction of being the first museum outside of the United States to display artifacts from 9/11, including a rescue truck recovered from Ground Zero. 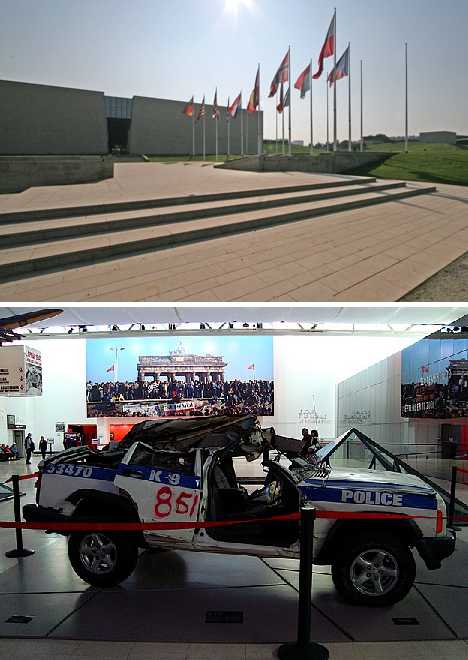 Though dedicated to showcasing the horrors of war and the reasons wars are fought, the Caen Memorial may seem a trifle emotionless compared to American memorials and monuments to 9/11. The difference reflects the view commonly held outside the United States that the events which sparked the War on Terror were primarily a historical event to be studied at arm’s length. 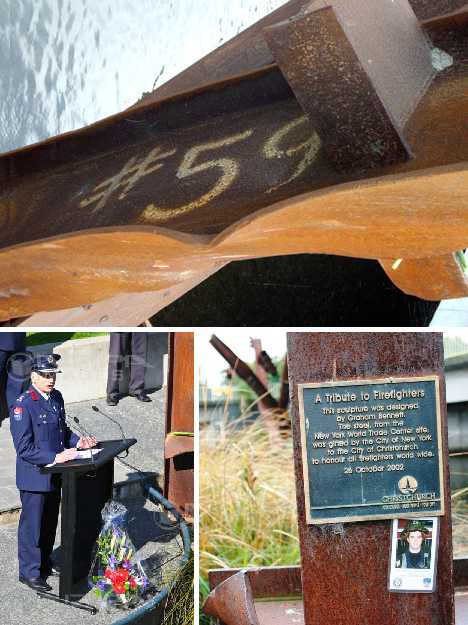 Steel girders salvaged from Ground Zero have been distributed to dozens of 9/11 memorials throughout the United States and beyond… in some cases, FAR beyond. You don’t get much farther from new York City than Christchurch, New Zealand, where artist and sculptor used several donated beams to create the Tribute to Firefighters monument in 2002. 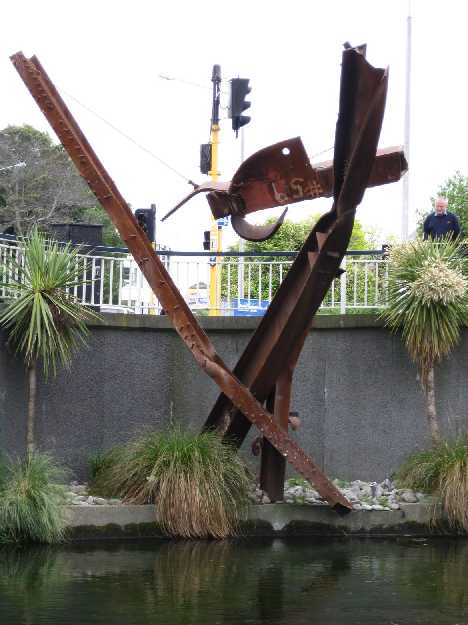 The dedication plaque on the memorial dated October 26th, 2002, reads, “This sculpture was designed by Graham Bennett. The steel, from the New York World Trade Center site, was gifted by the City of New York City to the City of Christchurch to honour all firefighters world wide.” 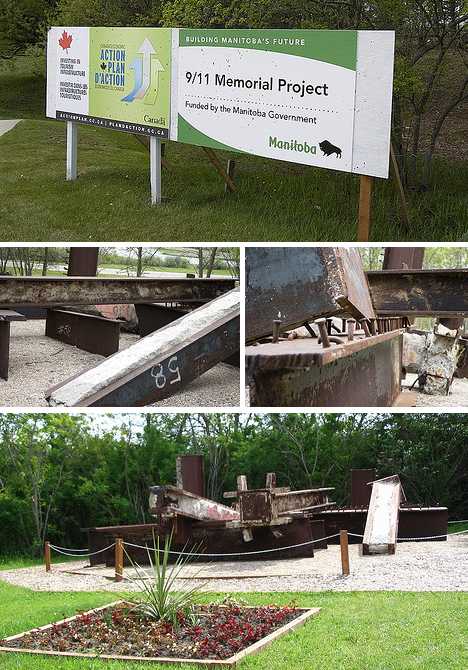 (images via: SJGardiner and Joanne Probyn)

The International Peace Garden was established in 1932 and straddles the US/Canada border just north of north of Dunseith, North Dakota. Among the many monuments and floral displays at the site are a mass of steel girders from the WTC, arranged somewhat haphazardly as if they had fallen naturally. 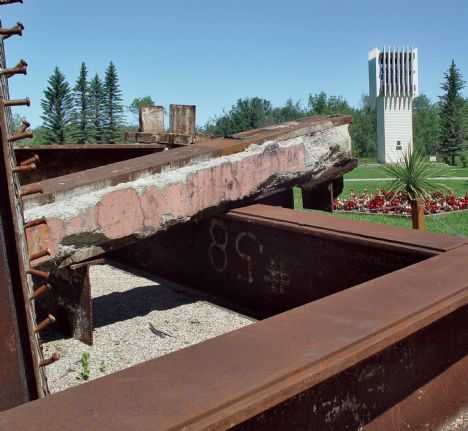 The Peace Garden 911 Memorial, as it is called, is accompanied by a list of 9/11 victims and their country of origin displayed in the Peace Chapel located in the park’s Formal Garden area. 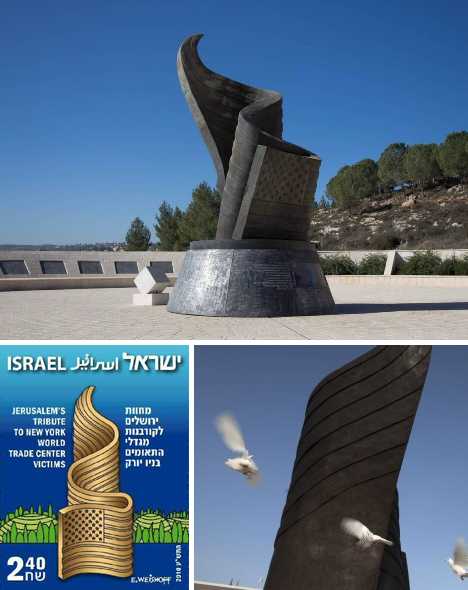 (images via: Stand for Israel, Israelity Blog and Daily Forward)

This list of eleven international 9/11 memorials closes with the 9/11 Living Memorial, located in the JNF-KKL Arazim Park. The memorial is situated in a comparatively isolated, mountainous setting just outside Jerusalem that promotes sober thought and introspection. 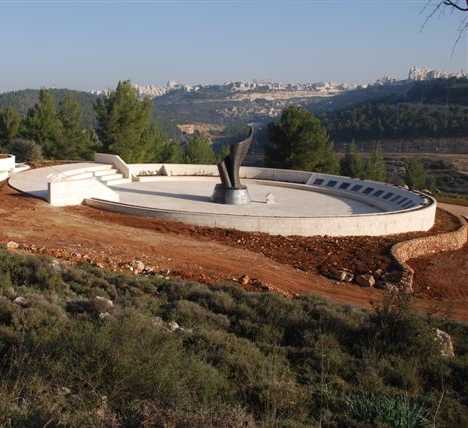 The focal point of the memorial is a massive sculpture standing nearly 30 feet tall, consisting of a waving American flag shaped into a memorial flame. The bronze flag rises from a base forged from steel recovered from Ground Zero and the names of all 2,980 victims of the attacks are inscribed on the walls of the courtyard surrounding the sculpture. The 9/11 Living Memorial is the only memorial sculpture outside the United States to include the names of the nearly 3,000 victims of the attacks.

The proliferation of monuments and memorials to the tragic events of September 11th, 2001, ensures the memory of the attacks and those who perished in them will never be forgotten. The existence of these memorials around the world, in formal or informal settings, helps translate the meaning of 9/11 into local cultures today, global culture tomorrow.