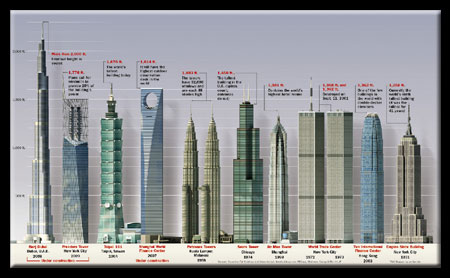 The creation of the (new) tallest building in the world has become such a status-seeking quest, cities and countries competing for the title have stopped revealing the planned height of their buildings. CNET has just reported, however, that the Burj Dubai tower has just taken the record at 1,680 feet and 141 floors so far – and it isn’t even finished yet. With all of this in mind, it seems an appropriate time to take a brief look at the tallest buildings in the world – both real and virtual. The above image depicts the 10 tallest buildings in the world – simply click to enlarge it for more information. Alternatively, see this list of the 100 tallest buildings in history. However, no real building has yet surpassed the following interesting virtual venture is skyscraper development. Below is just a tiny fraction of a fraction of the floorspace in the over 6,000 foot tall Mr. Wong’s apartment complex: 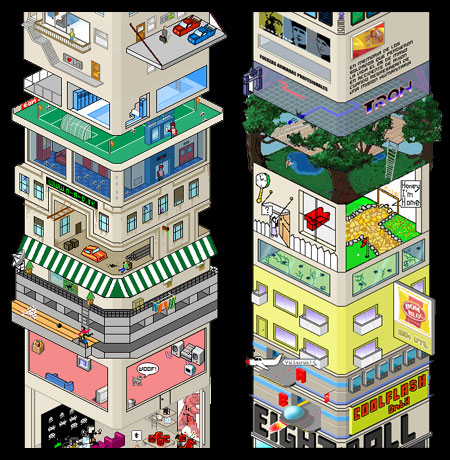 These levels were each customized by interested users. Sometimes there is a relationship between one floor and the next, but many are just one-off purely creative exercises in self-expression. It is well worth scrolling up and down and simply appreciating the ingenuity of this project. In many ways, this largest virtual building in the world was before its time- involving user-generated content before the ‘web 2.0’ buzz really hit the fan. The shifting in scales and playful but meaningful relationships between the layers and levels of this project are reminscent of Royksopp’s Remind Me video, again giving the sense that the project was ahead of its time: