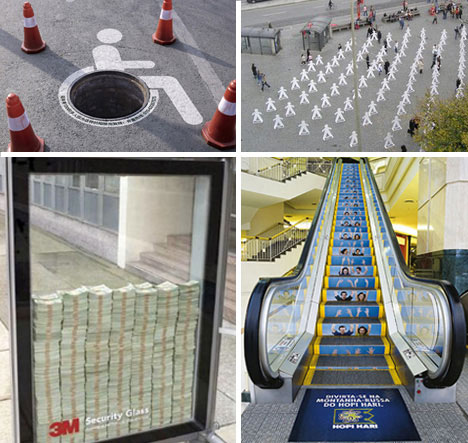 (Check out our complete Guide to Guerrilla Marketing.)

Guerrilla marketing has emerged as one of the most effective methods marketers use to break through the omnipresent ‘ad overload’ that society has trained itself to tune out. These 15 awesome guerrilla marketing campaigns build on the history of guerrilla marketing to illustrate where, why, and how the media markets their message in unexpected ways. 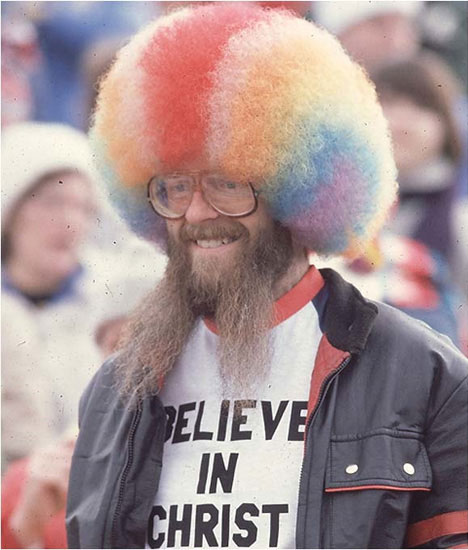 1) The prime tenets of a maximum impact guerrilla marketing campaign are low budget, high exposure and originality of thought. So declared Jay Conrad Levinson, coiner of the term “guerrilla marketing” and author of a 1984 book of the same name. Levinson may have been inspired by Rainbow Man, a fixture at televised sports and media events from the 1970s through the 1980s. Call him Rainbow Man, John 3:16 Guy, or by his real name, Rollen Frederick Stewart, did not market a product; he sought exposure for its own sake. If Stewart has been absent from America’s television screens of late, it’s for a very good reason… he’s currently serving three consecutive life sentences for a botched kidnapping attempt in 1992. 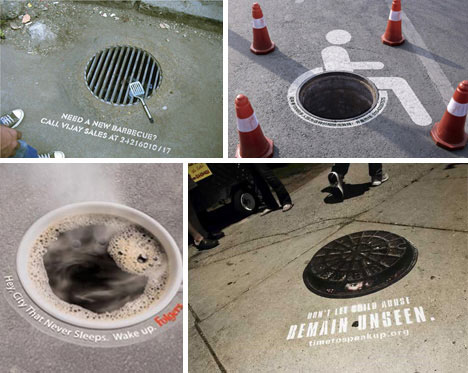 2) One thing that sets guerrilla marketing apart from traditional forms of advertising is its ability to catch the public notice in a wholly unexpected way. The quartet of manhole ads above (clockwise from above left: via Brainswitch, Adrants, Coloribus and Posima ) play on people’s tendency to keep their eyes on the ground to watch where they’re going – and just maybe, what they’re going to buy. 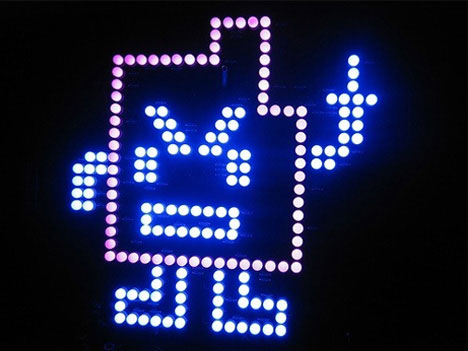 3) Sometimes a guerrilla marketing campaign has to go wrong before it goes right. A classic example is the so-called 2007 Boston Mooninite Scare, originated and organized by Interference Inc. as a unique way to advertise the Adult Swim Network’s cartoon show, Aqua Teen Hunger Force. The plan was to set up several dozen Nite Brite style, battery-powered placards in high visibility urban locations that included bridge overpasses and transportation hubs. The non-pro’s installing the devices attracted a different kind of attention from Boston city authorities hypersensitive to unusual activity post 9-11, who overreacted on a massive scale. It’s easy to look back and ask Interference Inc., “What were you thinking?”, but in actual fact the unexpected blast of media exposure did more for their clients then they likely expected. 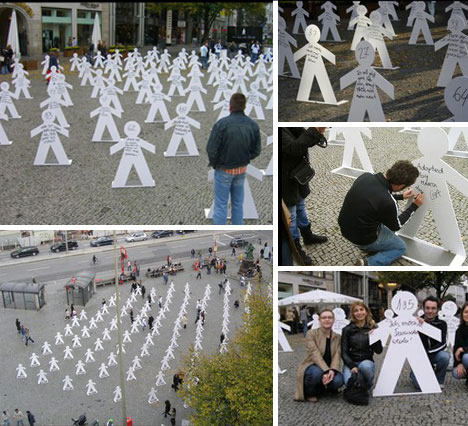 4) When is a guerrilla marketing campaign NOT about marketing? When it seeks to promote a cause. Both governments and NGOs have used guerrilla marketing to great effect in publicizing hot-button issues like smoking, animal rights and AIDS. The latter was the topic of this memorable 2007 installation in the German city of Hamburg. On a zero ad budget with all funds being donated, the Jung von Matt AG agency set up 114 statues in the city’s main square with each one representing an HIV-affected child. Hard to miss; even harder to ignore. 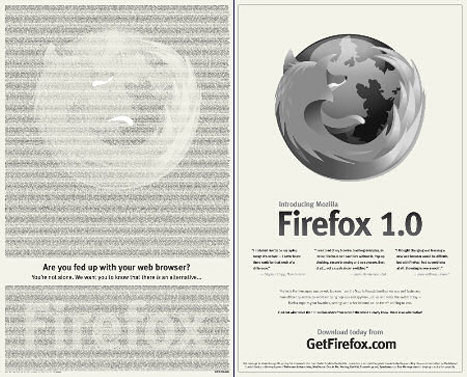 5) Guerrilla marketing has many similarities to other new, non-traditional marketing methods such as viral marketing. Hanging a label on a campaign is merely a matter of semantics in many cases and there are gray areas, exemplified by the historic New York Times ad for Firefox 1.0 that appeared on December 16, 2004. The 2-page ad was funded through contributions from 10,000 people who paid to have their names featured on one of the pages. The donation drive conducted by the Mozilla Foundation set out to raise $50,000 to cover the cost of the ad but ended up raising 5 times that amount. As for Firefox, well, everyone knows how that story turned out. 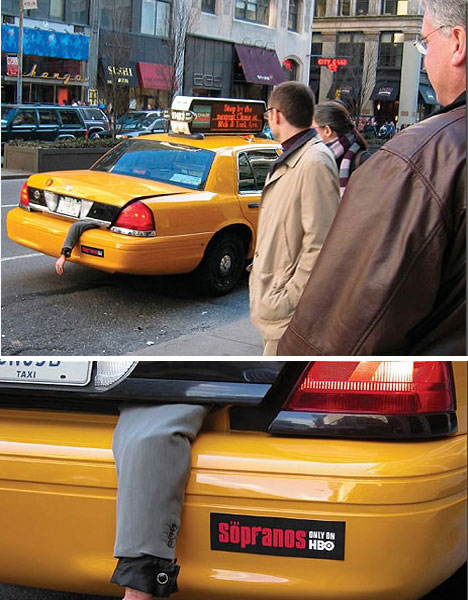 6) Shock value is a big part of any successful guerrilla marketing campaign. Specialty TV network HBO had a “hit” with the above campaign that played on the crime theme of The Sopranos. One has to wonder, though, if the cab drivers whose taxis hosted the grisly ads suffered a drop in their business! 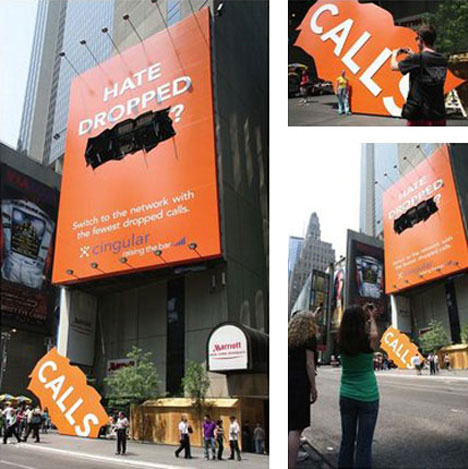 7) Cingular Wireless’ jumbo guerrilla marketing ad also used shock as a weapon, though without any gory connotations. The ad shown above works on a number of levels, attracting those looking down, those looking up or from a distance, and appealing to the funny bone by having the word “dropped” appear to have dropped right off the billboard. 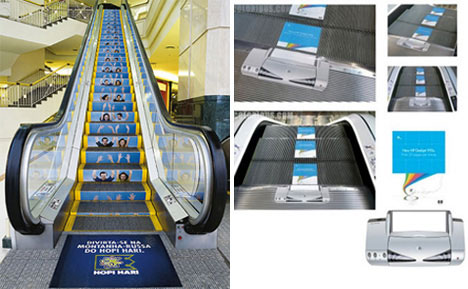 (images via: Guerrillacomm and Larry Bodine)

8) Some guerrilla marketing campaigns take advantage of pre-existing features of a location in order to magnify their impact. Such is the case with the above two ads from (left) Brazil’s Hopi Hari amusement park and (right) Hewlett Packard printers that take advantage of moving escalators to underline the theme. 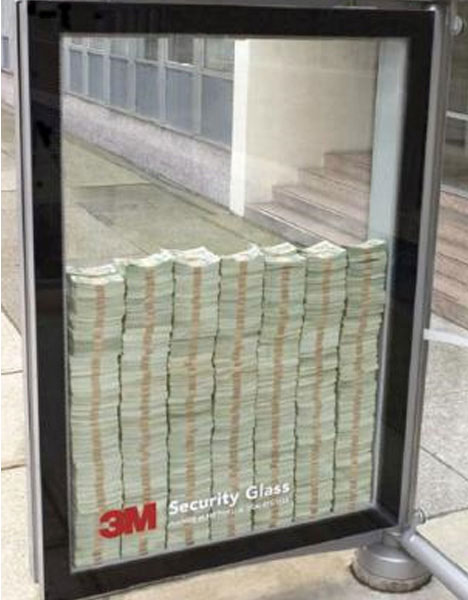 9) Effective ads don’t always demand a big budget. The above installation for 3M Security Glass uses just $500 in real currency but looks to be much, much more. The impression was strengthened by posting a security guard at the site, just to prevent anyone with dollar signs in their eyes from attacking the display with a tire iron. Use of the hands and feet WAS allowed, however, and the artful ad reportedly could take a kicking and keep on tricking. 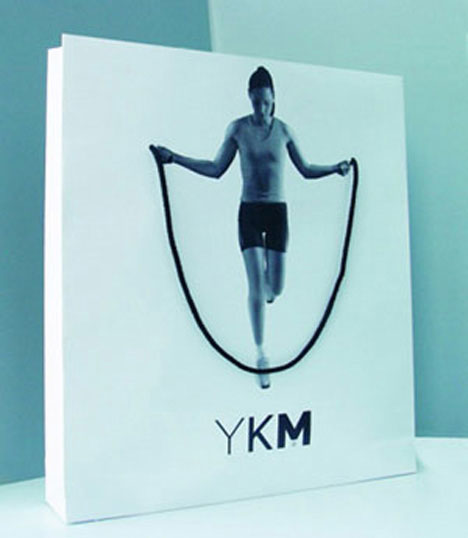 10) Another way to achieve big results on a small budget is to leave the target market holding the bag – literally. This Turkish ad for YKM Sport active wear may have roped in more than a few extra buyers with its clever use of kinetic imagery. 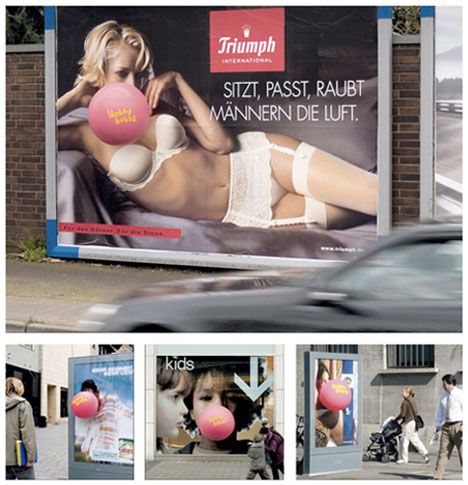 11) Sometimes two very different companies will partner up to boost a guerrilla marketing ad’s reach. The above ads illustrate that point. In the topmost ad, German lingerie company Triumph International attracts extra attention – not as if they need it – to their message by adding a third dimension provided by Hubba Bubba bubblegum. 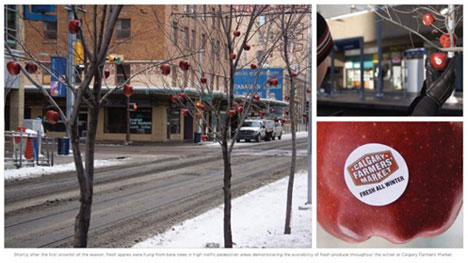 12) Even traditional industries like farming are jumping on the guerrilla marketing bandwagon. Take the Calgary Farmer’s Market for example. To publicize the rural market on cold urban streets, an ad campaign was hatched that saw dozens of fresh, juicy apples hung on bare-limbed trees. Each succulent fruit bore a sticker advertising the market’s fresh-not-frozen produce, thus giving extra apple appeal to ads that might otherwise be, shall we say, the pits. 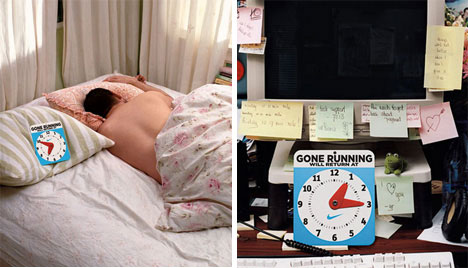 13) This guerrilla marketing campaign from Nike tapped into society’s habit of noticing and reading signs. The company used a two-pronged approach, featuring photos of the small Gone Running signs in amusing situations and, at the same time, giving out actual signs for people to use where and when they wished. The added viral component greatly increased the range and depth of the ad campaign at very little extra cost. 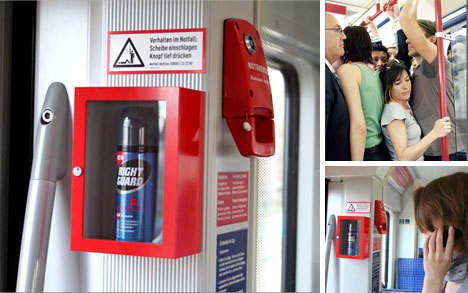 14) Using ordinary fixtures in extraordinary ways is another key to effective guerrilla marketing, as can be seen in this very creative ad for Right Guard deodorant. Once again, guerrilla marketers take advantage of society’s ingrained responses to red emergency boxes and triangular warning signs.

15) It’s said that sex sells, and really, who’s going to argue the point? Even so, it’s possible to use sex – or rather, human interest in the topic, to guerrilla market products. D&G did just that for a memorable campaign that employed a giant billboard of a model wearing a D&G bra. That’s not all, of course. Peering closer, curious onlookers noticed that the main image was actually a mosaic of hundreds of individual women wearing different styles of D&G bras. The deal was sealed when D&G’s ad agency created a website where those interested could zoom in to view the mosaic up close and very, very personal.

It’s hard to say whether guerrilla marketing is clever, we as a society are jaded enough to fall for its charms, or both. Any way you look at it, these ads show that in the cut-throat game of sales success, you’ve got to be a guerrilla to become the top banana!