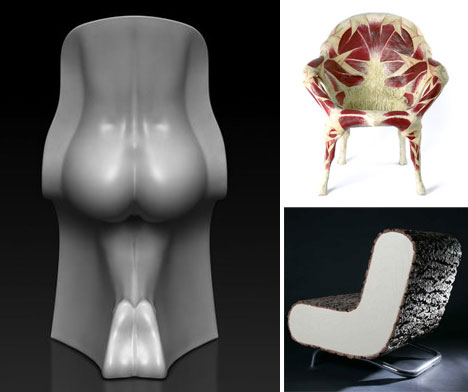 We spend much of our working lives occupying chairs, but since we never really see them we sometimes take them for granted. Luckily there are clever and talented designers willing to renegotiate our relationship with chairs. Here are some examples of strange seats and bizarre benches that dare to be different, from the fabulously elegant and modern to the flippantly humorous and unique and everything in between. 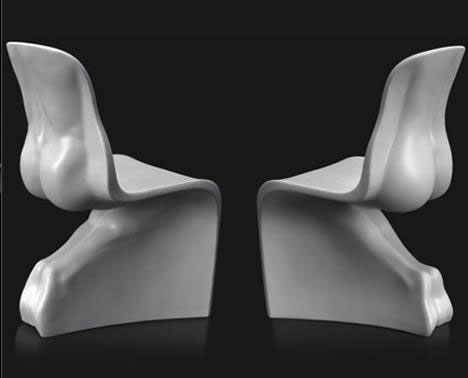 Stylish, very modern, very sexy – Fabio Novembre’s His and Her chairs are overtly sensual enough to not be to everyone’s taste, but there’s no denying their (eyebrow-raising) power. 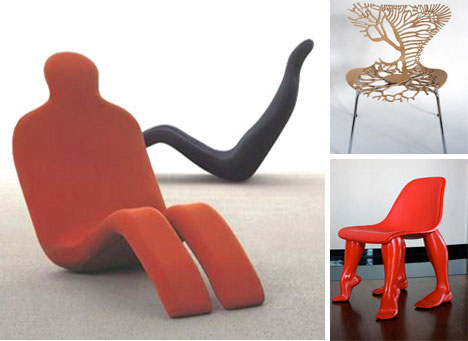 Also following the contours of its occupant, the Boulom Lounge (left) dates from 1969 and is the creation of Olivier Mourgue – who took it with him when he travelled around. Rather less portable is the Perspective Chair (lower right): created by Domeau & Pérès from a design by Pharrell Williams – the feet suggesting a couple’s stolen kiss. And those with an interest in what’s under our skin will enjoy Lisa Jones’ Vasa Intenstina (2007). 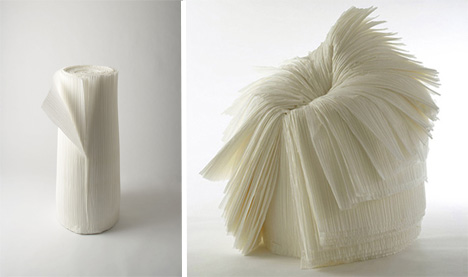 Nendo’s Cabbage Chair starts its life as an upright roll of pleated paper – the chair emerges as each layer is peeled away. The result has a striking resemblance to the sea anemone, predator of the deep. 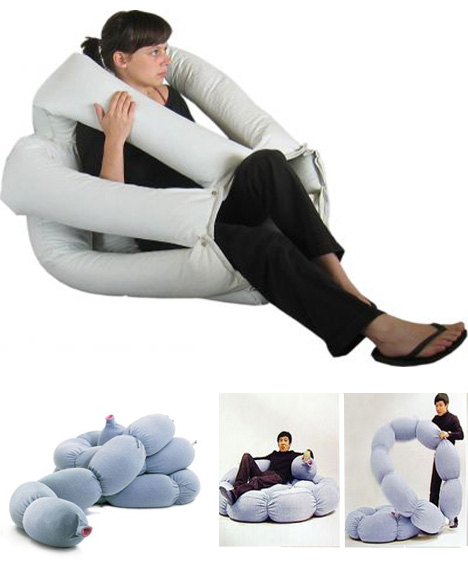 If you like close-fitting decor, the Octopus Chair and the Buldang should prove a deliciously comfortable experience – as long as you don’t have a phobia of cephalopods or pythons, that is. 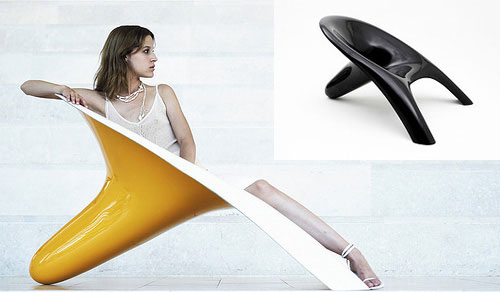 Truly a chair to disappear into, Christian Flindt‘s Orchid Chair seems keen to draw you in. 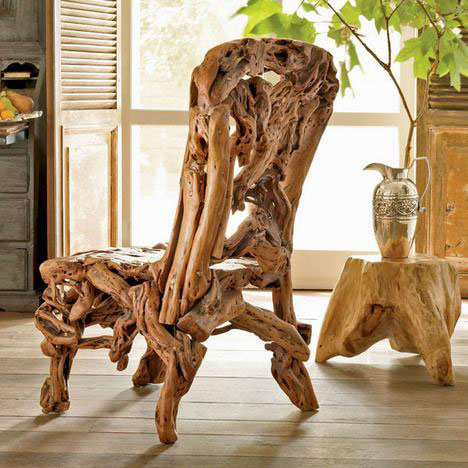 Azelea branches are often used to form a trunk for other flowering species to wind their way up. They’re solid and fascinatingly gnarled – and it’s not hard to see why designers Wisteria considered them as the basis for this extraordinary Azelea Wood Chair. 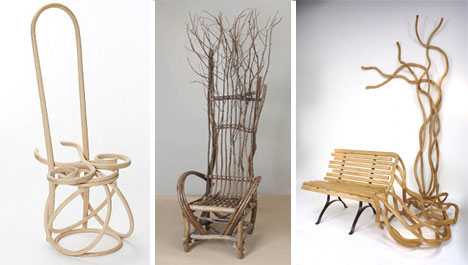 Here’s a set of chairs that look determined to return back to Nature as quickly as possible. On the left, the Chair of the Rings looks like it’s springing apart in an orderly fashion – while on the right, Pablo Renoso’s Spaghetti Wall Small appears to be turning into a vine before your eyes. Occupying the middle ground, the Aspen Chair seems largely content with the ‘chair’ part of its name…apart from a little sneaky growing going on around the top. 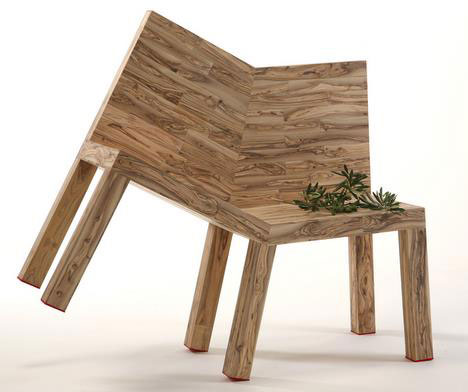 Made by Israeli designer Aviad Gil, the Conflict Chair is crafted from olive wood (just like the branch that universally symbolizes peace) and its design conveys a variety of messages – not the least being that for two sides to be able to sit down, there must always be a compromise.

Here are some chairs that have something to say about materials. The L-shaped slice of tree is titled Nature v2.01: it’s a question-mark laid against the grey area between Culture and Nature. In the manufacturer’s words: “On the assumption that our industry puts no limit to the transformation and reproduction of subjects with the pretense of progress, it is likely that some day we might encounter square trees growing in rows“. Simone Racheli‘s Meat Chair brings the point home even harder (and if you’re wondering – it’s made of plastic and wax). 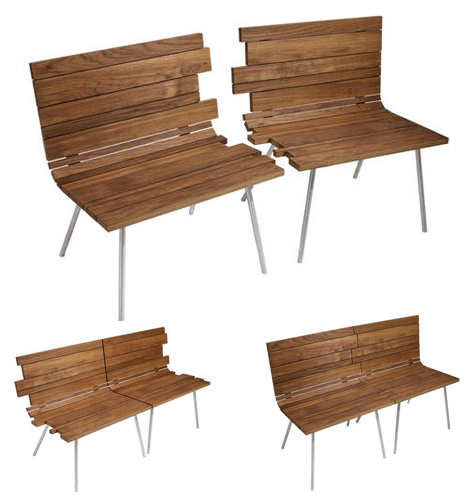 As Matthew Kroeker sees it, people are just a collection of chairs, trying to find the other chair that fits them so exactly that they make a bench together. 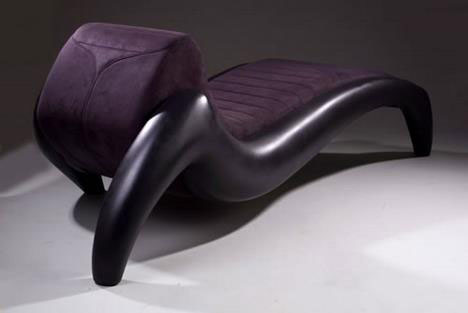 Two parts velvet couch to one part arachnid, the Living Lounge Chair is crafted from micro-suede and poplar, and has an award-winning design that is guaranteed to be the centre of attention of any room. (Just don’t forget it’s there; it could give you a nasty fright). 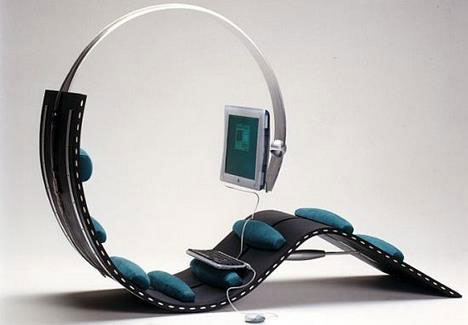 And for other chairs that have a healthier-than-normal relationship with the ground: the Leaf Rocking Chair couldn’t be a simpler or more portable design; the Once A Door chair is made from reclaimed timber by UK designer Claire Danthios; and the compulsive Internet surfer’s dream, the Surf Chair Workstation, an elegant ergonomic solution to the problem of where your computer goes when you’ve got your feet up!